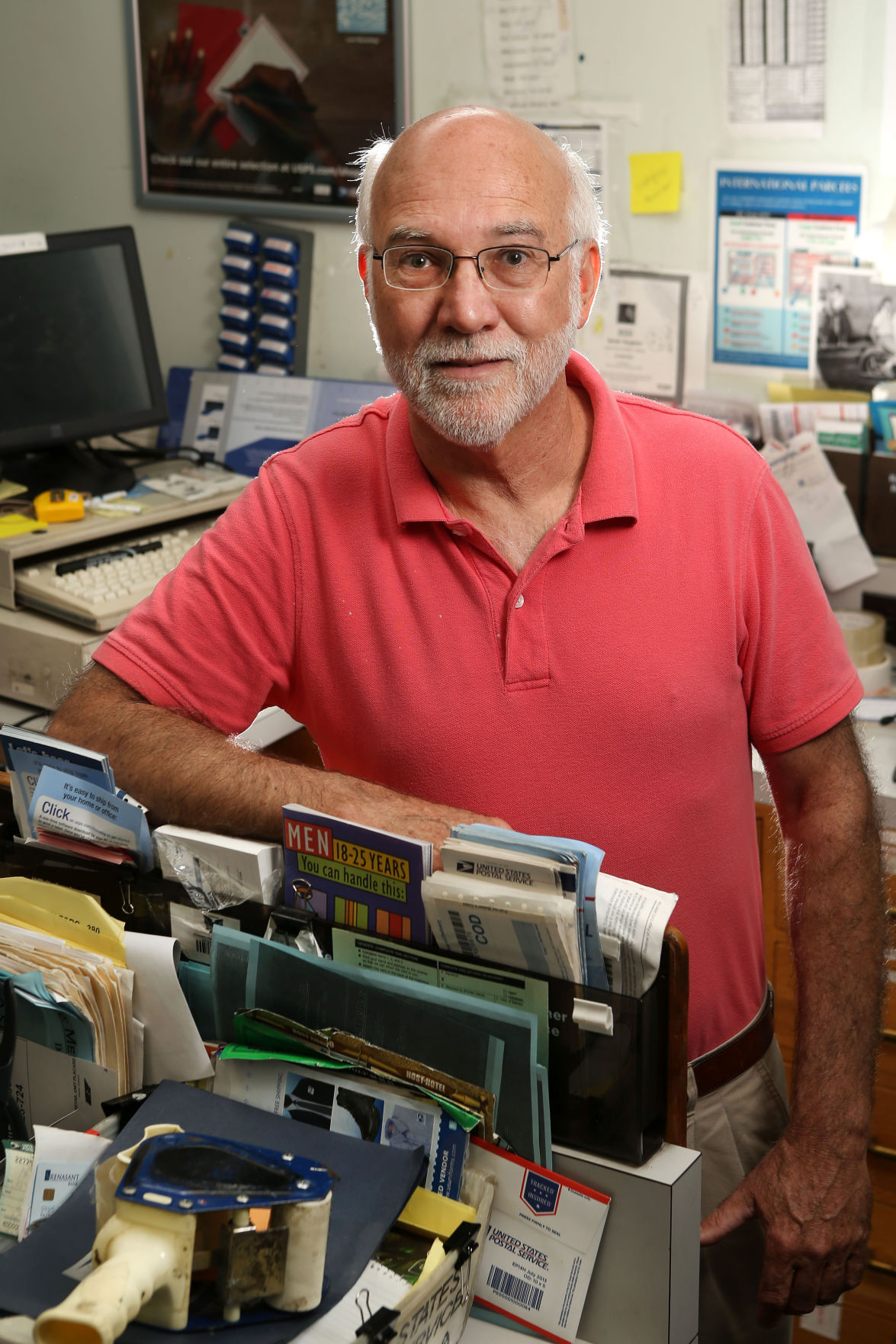 “I started out in the evening time sorting mail. We called it ‘The Night of the Living Dead.’ We were professional, but we had fun,” said Kenny Long, who recently retired from the downtown Tupelo Main Street post office. 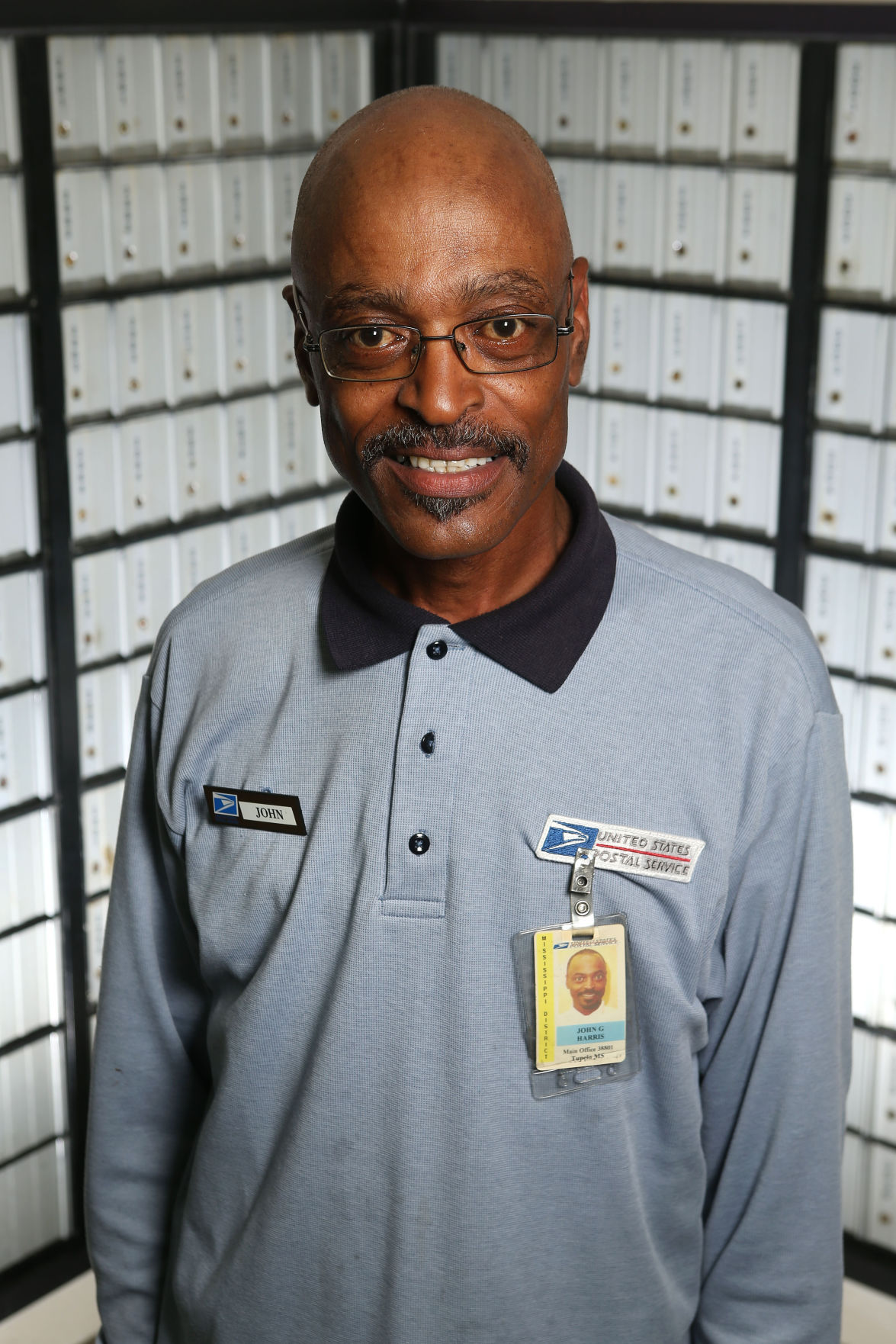 “My favorite part of the job is I get to serve our customers. They’re the best people, and they support our post office here,” said John Harris, who plans to retire from the Tupelo post office on Thomas Street this summer.

“I started out in the evening time sorting mail. We called it ‘The Night of the Living Dead.’ We were professional, but we had fun,” said Kenny Long, who recently retired from the downtown Tupelo Main Street post office.

“My favorite part of the job is I get to serve our customers. They’re the best people, and they support our post office here,” said John Harris, who plans to retire from the Tupelo post office on Thomas Street this summer.

TUPELO – One smiling face has already gone, and another is making plans, so trips to the post office in Tupelo won’t be the same.

Kenny Long, 64, of Smithville, spent 27 years with the U.S. Postal Service, and his last decade was behind the customer service window at the downtown Tupelo Main Street location. His last day was Wednesday.

“I’m going to go on vacations with my family,” he said. “Now that I have grandkids, it’s a good excuse to be a kid again.”

Over at the Thomas Street location, 60-year-old Plantersville resident John Harris has submitted his paperwork, and he expects to go to the house by the end of July.

“When they say, ‘What are you going to do after that?’ I say, We’ll see. It’s a whole new world to explore, and I’ve never been there before.”

More than three decades ago, Harris got out of the Navy and was searching for stability in his life.

“I got married and needed a steady job, and the post office seemed to fit the bill,” he said.

He started on the night shift at the Thomas Street office, where he sorted mail six days a week.

Long also was a Navy veteran. He worked for the telephone company, but decided too much moving around was required. He took a job at the post office in Pontotoc.

About two years later, he transferred to Tupelo to work the night shift at the downtown location.

“We separated the mail, and we had a lot of fun each night,” Long said. “Half of the people had nicknames. You had Boss Hawg, Angry Man, Wildman Willie and Freebird. The girls were Pretty Patience and Lil’ Kim Possible.

“I was just Kenny, but certain people had nicknames. I didn’t have one.”

Before the internet took over the world, sorting the mail at certain times of the year was better than going to the gym.

“We used to get the Sears catalog and the Penney’s catalog,” Long said. “Mail would be up to the ceiling. We referred to that as the job that ate our brains.”

As much as they enjoyed working at night, both took service window jobs when they came open.

“I had more seniority than the other person who bid on it,” Long said, “and I never looked back.”

Harris said experience is important, but doing the job from day to day requires a certain type of person.

Harris and Long found their callings behind their respective counters, and they developed citywide reputations for building rapports with their customers.

“You can make someone’s day. That’s what I like,” Harris said. “We handle the customers’ needs. It is a relationship. I try to call as many people by their names as I can. I know a lot of names.”

Long said that in addition to selling stamps and envelopes, his job involved providing information about Tupelo to anyone who needed it.

“They come in here and they ask for directions,” he said. “We’ve got maps of the city, but we also tell them where to go and how to get there.”

When Elvis Presley fans stopped by for their Elvis stamps, Long told them about the Tupelo Automobile Museum and the signed John Grisham novels on sale at Reed’s Gum Tree Bookstore.

“You’re like a resource. I enjoy sending them to the right place,” Long said. “Good restaurants? We get asked that all the time.”

But, naturally, the bulk of their jobs involved the mail, and that could be tricky at times. Long said mothers often let their little ones put letters into the dropbox, and, about once a week, a purse goes in with the letter.

“They have to come around front and tell us what happened,” he said.

One regular visitor to the downtown location works with a prison ministry. She was mailing a package, and Long asked if she needed insurance for it. She declined.

“She was mailing Bibles. She said, ‘If they steal these Bibles, they need to be reading it,’” he said with a laugh.

The Thomas Street location gets its share of strange mail. It turns out to be perfectly legal to ship live chickens through the U.S. Postal Service.

“Water and food, that’s up to the mailer to prepare that,” Harris said. “They have all the stuff they need inside with them.”

Over the years, he’s gotten used to hearing “cockledoodledoo” followed by a customer’s questions.

“They ask, ‘Do you have chickens here?’ I say, ‘No, we’ve got ducks.’ They say, ‘I heard chickens.’ I say, ‘That’s a Chinese duck.’ I like joking with them. They know what a chicken sounds like,” he said.

On the verge of retirement, Harris said he’d definitely sign up for another 32 years if he had it to do over again. He was born for the job, after all.

“If you’re 85 percent happy with what you’re doing at the Postal Service, then do it,” he said. “The other 10 percent is the weather, and you’re always going to have to deal with that. The last 5 percent is dealing with the other employees.”

When post office jobs come open, Long and Harris said they have no problem recommending them to people.

“It’s a good place to work,” Long said. “I’ve met some really good people here. Not many people get to go and have fun each day. I do. I consider myself lucky.”