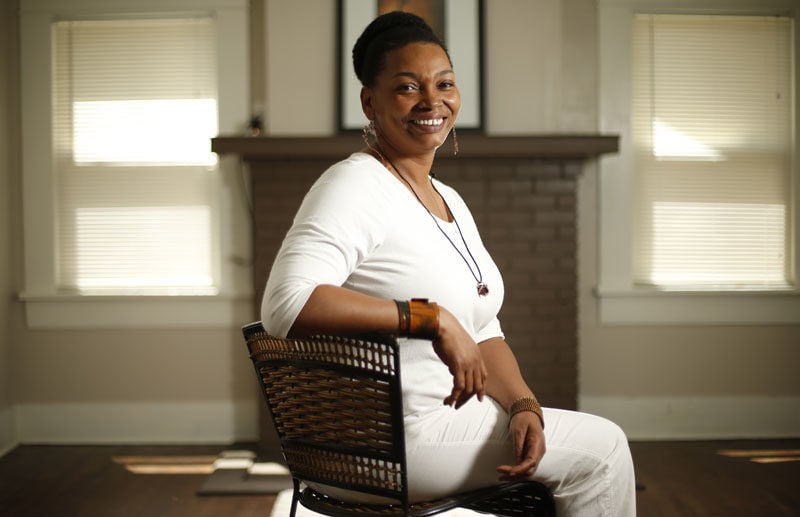 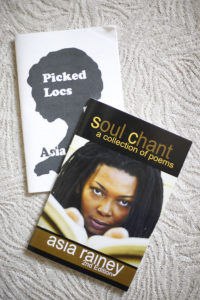 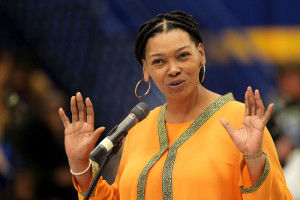 Buy at photos.djournal.comTupelo High School senior Zarria Gates sings a solo portion during the song "Every Praise is to Our God" as she and the THS Voices choir perform at the school's Black History Month Program on Monday. THS Voices is the choir that forms for that annual event.

Buy at photos.djournal.comTupelo High School senior Zarria Gates sings a solo portion during the song "Every Praise is to Our God" as she and the THS Voices choir perform at the school's Black History Month Program on Monday. THS Voices is the choir that forms for that annual event.

TUPELO – Asia Rainey knows at least one important thing about everyone she meets: They’ve got stories inside them.

She’s particularly interested in helping people get their stories out. Her preferred way is spoken word poetry, a passion that snuck up on her more than 15 years ago.

“It was a fluke. A lady had a poem. She wanted to read it, but she didn’t want to get up in front of people,” Rainey, 42, said. “I went with her that night to support her. From there, I went back to my notebooks.”

A New Orleans native, she’d captured her thoughts since childhood, but she’d never shown anybody what she’d written down. She studied English at college, but wound up managing restaurants and nightclubs.

Then spoken word spoke to her.

“It started off as something personal. It was about telling my stresses and concerns and my past experiences,” she said. “It was really about understanding myself.”

Now, she’s an evangelist who travels around trying to connect people with the spark of creativity that resides inside them. That’s what brought her to Tupelo.

“Asia is a very multifaceted person,” said Shawn Brevard, a Link Centre board member and chairwoman of the performing arts commission. “I connected with her initially because I was searching for an artist to help with kids’ writing skills.”

That was a couple of years ago, and Rainey has made repeated visits. She’s worked with students at Tupelo High School and Tupelo Middle School, as well as the Police Athletic League, Girl Scouts, Boys and Girls Clubs of America, S.A.F.E. and more.

“I continually tell people: ‘You can do this. You have notebooks and your thoughts,’” she said. “I use it with young people, helping them to find their voices and amplifying them.”

Such work can have big results. Brevard said that at least one teacher at Tupelo Public School District believes Rainey’s methods might have saved a life.

“I don’t know if you can get more important than that,” Brevard said. “That quiet little girl … What if she never spoke up?”

But the girl found the courage to tell her story in front of class. Adults were able to steer her toward the help she needed, and fellow students became her protectors.

“Asia definitely has a heart for those who have struggled,” Brevard said. “She can handle those dark things that block people.”

Rainey said it’s not always easy to get someone to share their innermost thoughts, but the process is relatively straightforward. It’s about creating a safe environment.

“Young people have serious stories to tell, and they are probably the furthest away from feeling like they have a platform for that,” she said. “The stories are there. They just don’t know if anyone wants to hear them yet.”

She calls one of her spoken word poems a “what if?” It’s based on the time when a neighbor left her 5-year-old and 3-year-old at home alone. It was 1 a.m., and one of the kids was trying to fix something to eat on the stove.

“I brought them to my home, gave them something to eat and put them to sleep,” Rainey said.

The incident inspired a poem about what could’ve happened to those kids. It’s a tragic tale that sometimes finds just the right listener.

“I can’t tell you how many times I’ve done that poem and had a young lady come to me and say, ‘I’m going home,’” she said. “You can affect the way a person thinks, and they could change their minds.”

The school girl and the young mothers are special cases. Rainey said reactions don’t have to be so extreme for spoken word poetry to make an impact. According to her philosophy, the audience is as important as the person who stands up on stage.

“Two people may never meet. One of them is in the audience, one is on stage,” she said. “The person on stage is telling stories about where they’ve been, who they are or where they’re going. They may never see each other again, but a connection is made. Understanding is what changes things.”

Some listeners might get upset or emotional over what they’ve heard. Others might carry unexpected thoughts and ideas around with them for a while.

“You might not agree with it, but you hear it. You hear their ‘Why?’” Rainey said. “You might not mention it then, but you might go back to your circle and discuss it. Who knows?”

If such an idea sounds interesting, Tupelo has a new set of options, thanks to Rainey’s influence.

“She came here one time and stayed quite a while,” said Thomas Woods with Aunt B’s Soul Food Restaurant on South Green Street. “She was a very nice lady, very pleasant to talk to. She said we could do spoken word. We’ve been trying to get something like that started. It’s been good.”

Woods and his sister, Brenda, usually schedule a speaker on Fridays, and others are welcome to step up to the open mic.

“People will get up there and share what they have to say,” Woods said.

Rainey’s also organizing her own events in town. She gave a show this past Friday at Link Centre, and she’s invited a friend to perform at the same venue on June 17.

In addition, she’s planning writing workshops for young people and adults, and she wants to meet the region’s artists, dancers, musicians and other creative types.

Basically, she’s making herself at home, a sensible thing to do since she moved to a house on Joyner Street on May 1. Working with students introduced her to Tupelo, and she was impressed by what she found.

“I met a lot of really good people. That was the first point. Then I started taking a look at the neighborhoods and how relaxed and comfortable they seemed to be,” she said. “I started asking myself, ‘Where do you need to put roots down? Where can you grow?’ Tupelo ended up on a short list.”

Rainey came to Northeast Mississippi for a fresh start. It’s a chance to tell and listen to new stories, and she’s not exactly sure where that will take her.

“It’ll be interesting to find out,” she said.