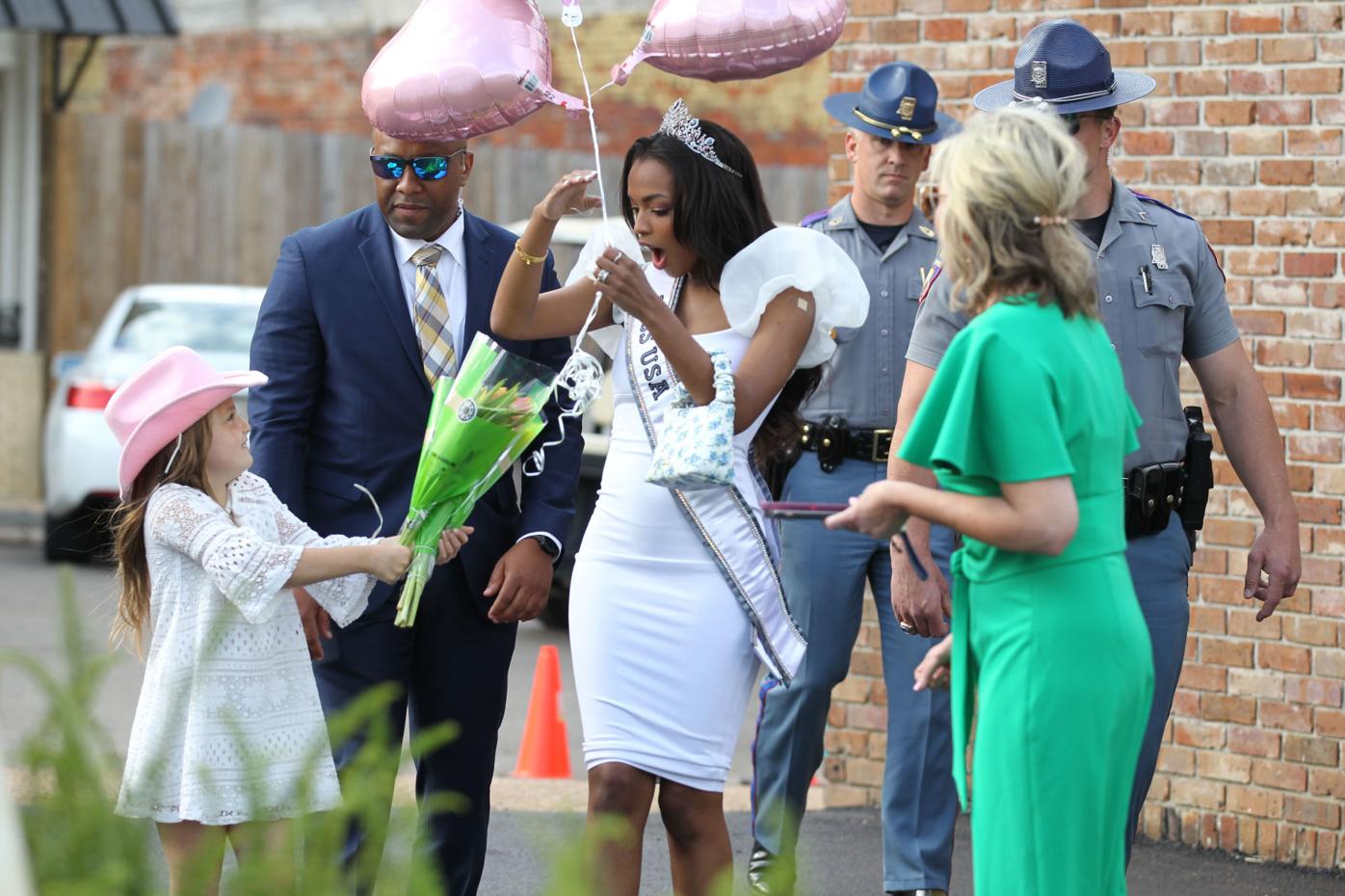 Miss USA Asya Branch reacts as Annalise Grooms, 7, presents her with balloons and flowers following her parade April 23 in Booneville. 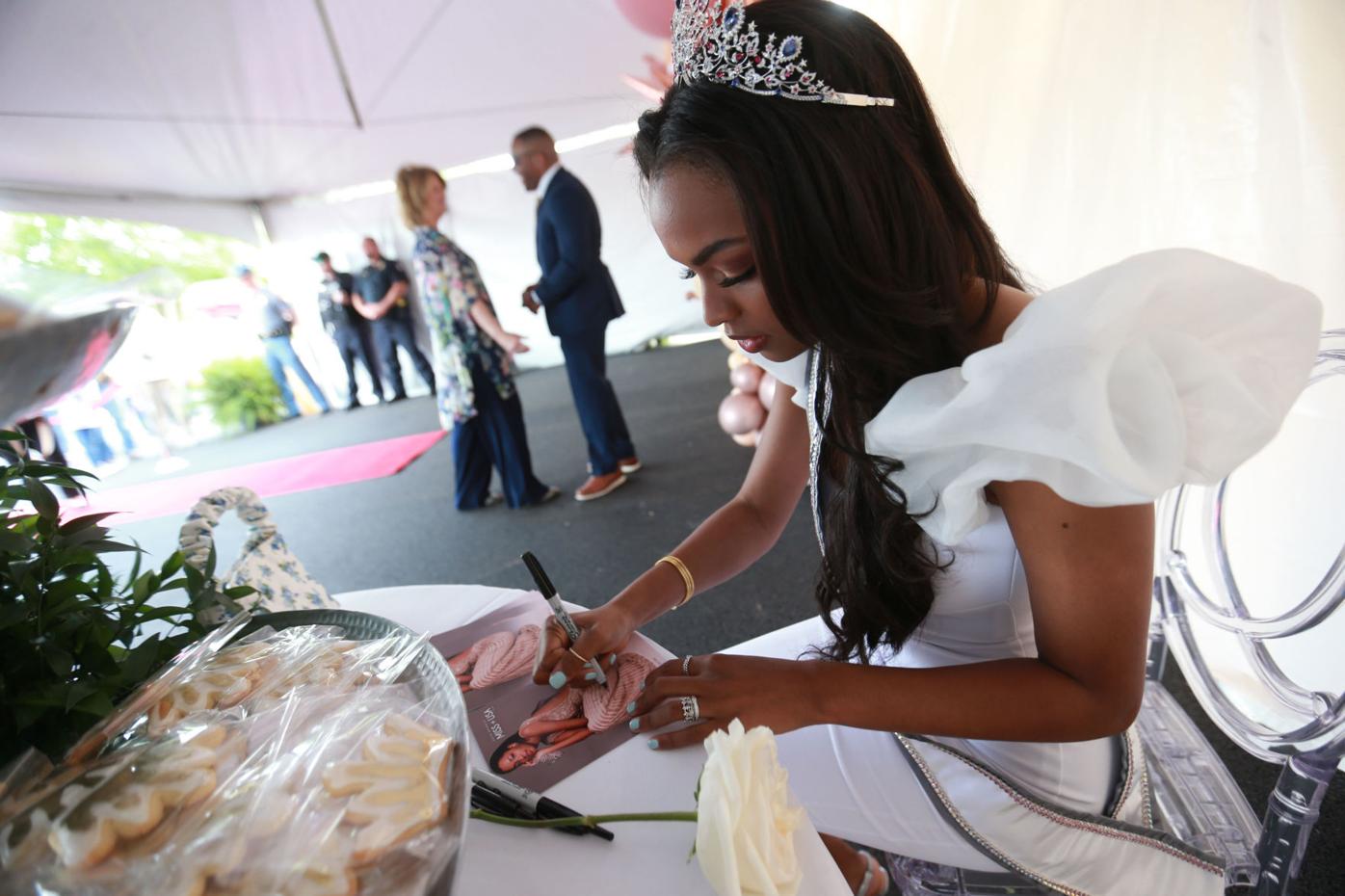 Miss USA Aysa Branch begins signing her autograph to cards to pass out to those who attended her meet-and-greet April 23 in Booneville. 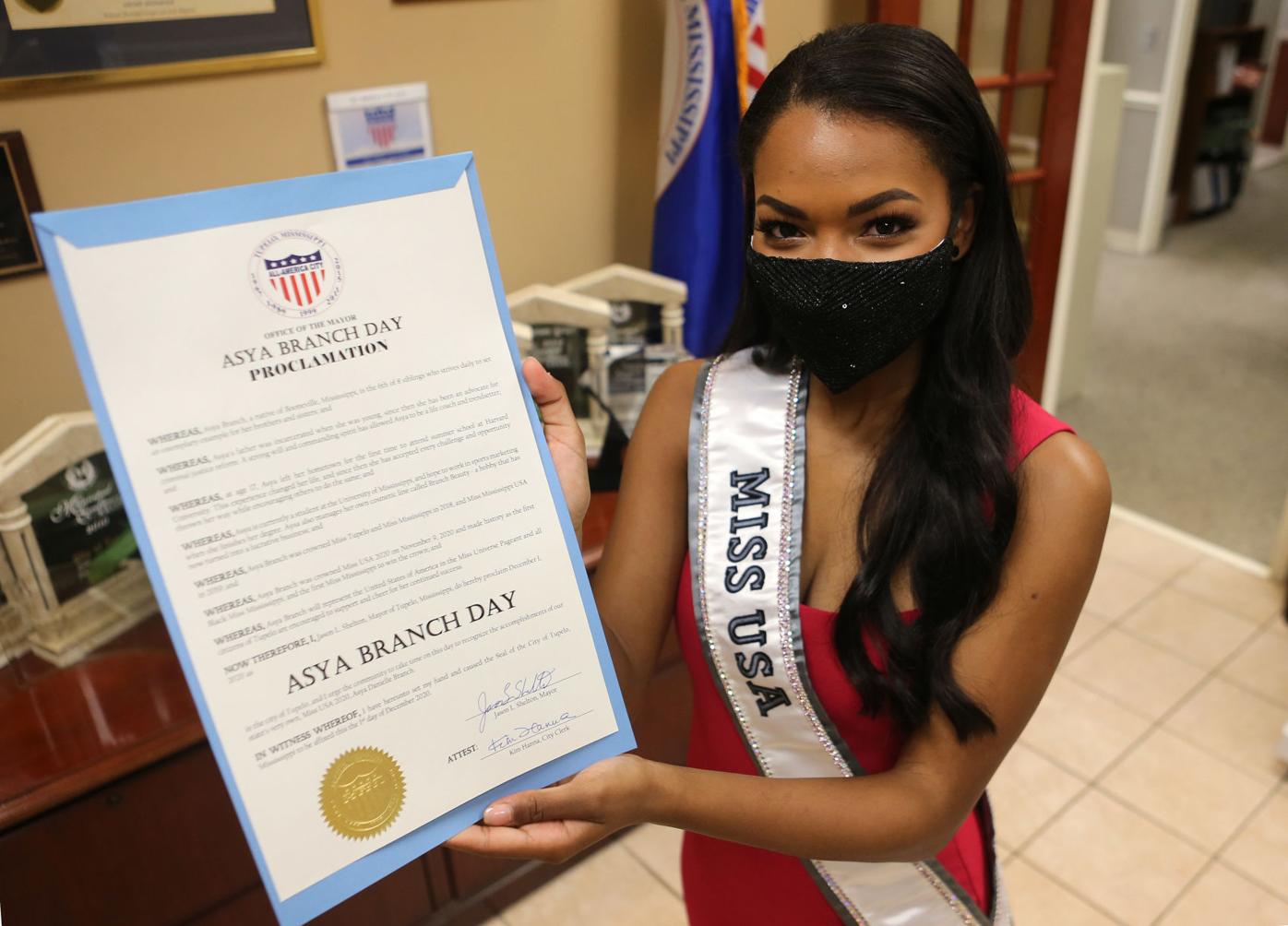 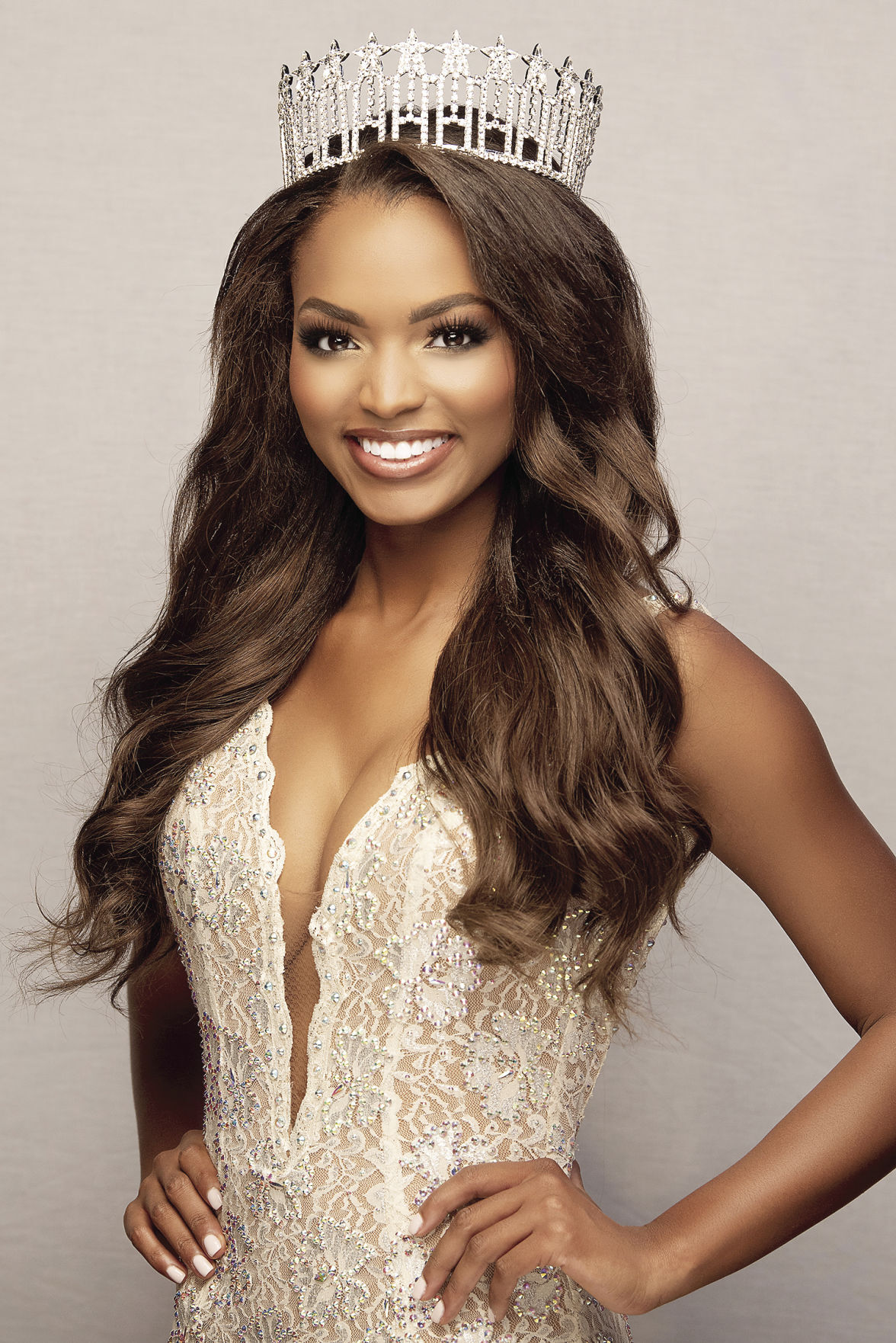 Miss USA Asya Branch, pictured in her custom Johnathan Kayne gown, will compete for the title of Miss Universe this week in Hollywood, Florida.

Miss USA Asya Branch reacts as Annalise Grooms, 7, presents her with balloons and flowers following her parade April 23 in Booneville.

Miss USA Aysa Branch begins signing her autograph to cards to pass out to those who attended her meet-and-greet April 23 in Booneville.

Miss USA Asya Branch, pictured in her custom Johnathan Kayne gown, will compete for the title of Miss Universe this week in Hollywood, Florida.

Asya Branch was feeling the love when she was standing on a stage this past November in Memphis.

She knew she had the adoring support of people from places like Booneville, Tupelo, Oxford, Biloxi, McComb, Clarksdale and all points in between. Branch was Miss Mississippi USA, and she wanted to represent the state well.

Then, Branch's name was called at the end. She got the promotion she wanted. She was now Miss USA.

As the Booneville resident competes this week at the 69th Miss Universe competition, she'll once again feel the love. Only this time, it's coming not just from her adopted home state, but also from her native home state of Michigan, Alaska, Florida, Maine, the Dakotas and the Carolinas, and all points in between.

Branch knows she's on a bigger stage – one that will be seen by an estimated 500 million television viewers worldwide.

"I think it's just knowing it's international now, rather than just national. It's a broader audience," said Branch, who turned 23 Wednesday. "At the same time, I'm still trying to be the best version of myself, striving to make an impact and just representing to the best of my ability. But now I'm not just representing Mississippi, I'm representing the United States of America."

Branch and 73 other young women representing their native countries will compete this week in Hollywood, Florida, for the title of Miss Universe 2021.

The national costume show and preliminary competition will be streamed online May 13-14 at missuniverse.com. The finals will be live on Sunday, May 16.

The United States has won the most Miss Universe titles, eight. The last U.S. winner, Olivia Culpo (2012), will be a host of Sunday's finals at the Seminole Hard Rock Hotel and Casino.

Online voting is now open on the Miss Universe official app for fans to vote their favorite delegate into the top 21.

The next Miss Universe will succeed Zozibini Tunzi of South Africa, who was crowned in 2019. Tunzi's reign has been longer than usual because the 2020 competition was postponed to this year because of the COVID-19 pandemic.

Since her Miss USA win, Branch has been living in a New York City apartment provided by the pageant. She arrived in Florida on her birthday to continue preparations for the competition.

During an appearance in Booneville, Branch told how preparing for Miss Universe has been similar to other major pageants. In addition to being Miss Mississippi USA in 2020, she was crowned Miss Mississippi 2018 and competed in the Miss America pageant.

"I've been doing interviews, and I think it's all about the experience, the journey and everything," she said. "Working out, making sure I'm fit for the stage. Working on my walk and, most of all, working on my wardrobe. I've got my wardrobe together, so I think I'm ready to go."

Branch's Miss USA public appearances have been limited because of the pandemic. She still manages to connect with fans and supporters through videos on the Miss USA YouTube channel.

There are videos of her answering questions during a stroll through Central Park and visiting various locales, like the Empire State Building. In other videos, she talks about her Miss Universe prep work, tells how she applies makeup, gives a soft waves tutorial, tells what she eats in a day, shares her thoughts about International Women's Day, and answers fan questions.

Branch joined other Black women who've won Miss USA titles for a Black History Month discussion about their experiences. She's also commented on topics like the U.S. Capitol riot, and sexual assault in the military.

"The biggest thing for me to share is that it's so much more than the outward appearance," Branch said. "I think I have a very big heart and I care about the things that I'm working toward and my passions. I want people to recognize that. I know that I'm here to make an impact and make a lasting difference in the lives of others."

Even though Branch has Miss USA duties in New York, she has managed to make occasional trips to Mississippi. She's visited with family and friends in Booneville. Her studies at the University of Mississippi are on hold because of her pageant title obligations, but she was able to come back for an Ole Miss football game.

Branch also appeared at Tupelo's city hall to accept an Asya Branch Day proclamation. In March, she returned to the site of her Miss Mississippi USA victory – Tunica – to celebrate the crowning of the 2021 titleholder, Bailey Mae Anderson of Hurley.

Her latest appearance in Booneville on April 23 included a downtown parade and meet-and-greet session, where the local queen spent 40 minutes chatting and posing for photos with fans. The evening ended with a sendoff party in her honor.

Branch said she felt the love of her hometown and supporters during that visit.

"I've been so excited to come back home," Branch said following the meet-and-greet. "The amount of love and support here is just so surreal, and it's amazing to have this energy and love going into the Miss Universe competition."

In her Miss Universe "Up Close" video on YouTube, Branch tells what she wants to achieve if she wins the title.

"If I'm crowned Miss Universe, I will continue to accomplish the things I had on my agenda as Miss USA and then some," she said. "I want to continue to advocate for women, for equality, and for our justice systems internationally. I hope to be able to leave a lasting impact and really emphasize on unity."