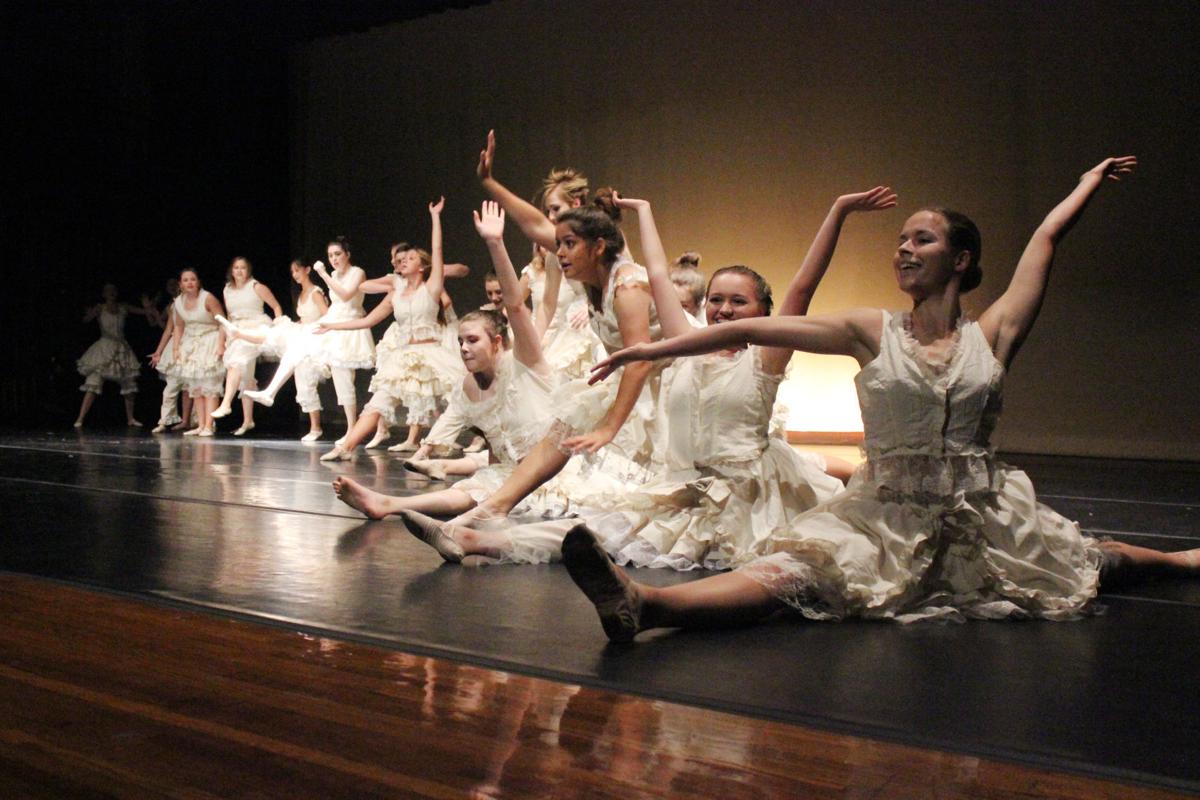 Gwyn Clemons, far right, and the rest of the Doniphan Dance Project cast close the humorous opening piece, “Classical Meltdown,” of the company’s Aug. 1 concert at the Tupelo Civic Auditorium. 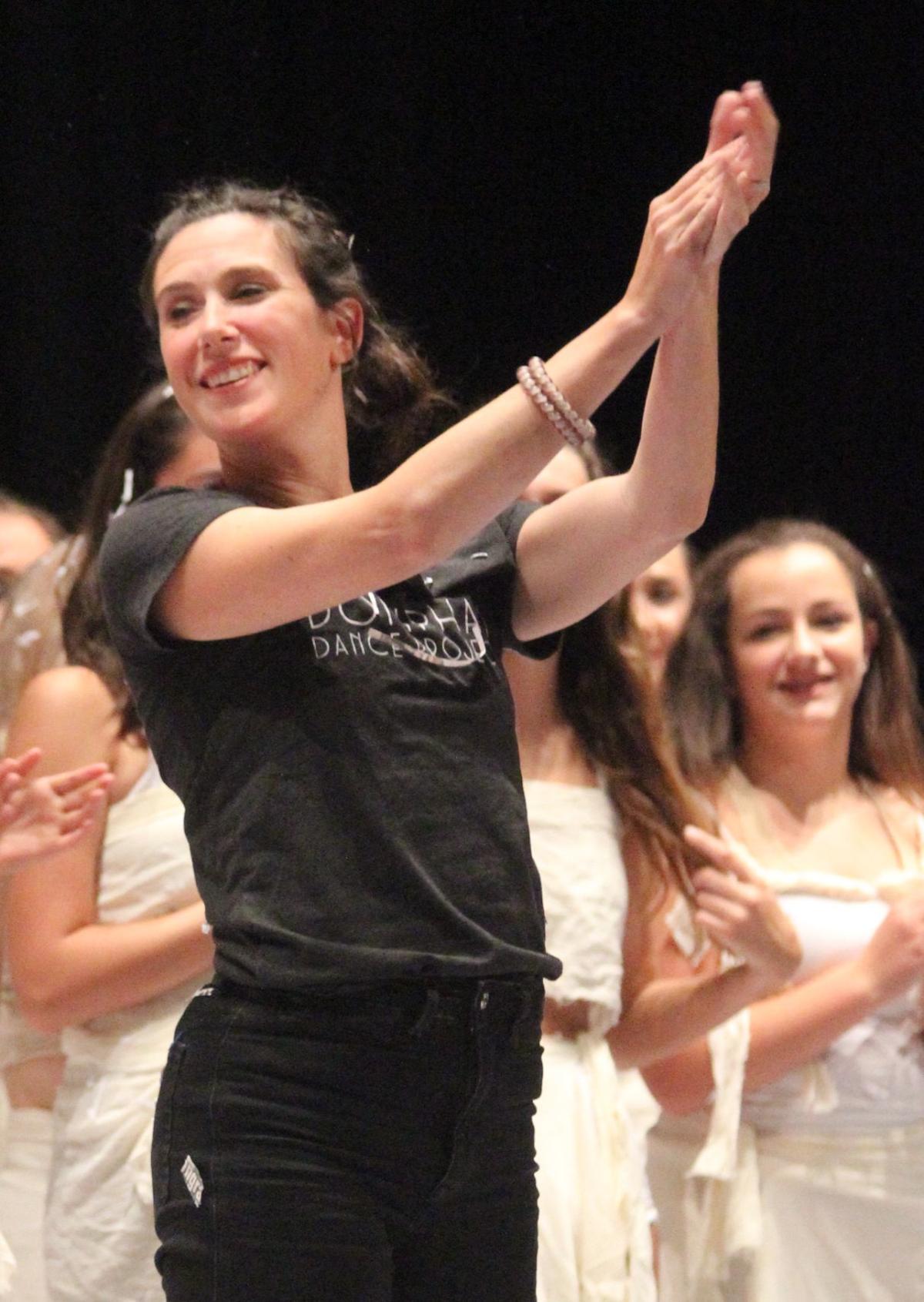 Roxie Thomas Clayton, artistic director of the Doniphan Dance Project applauds her cast of dancers at the end of the Aug. 1 concert in the Tupelo Civic Auditorium. 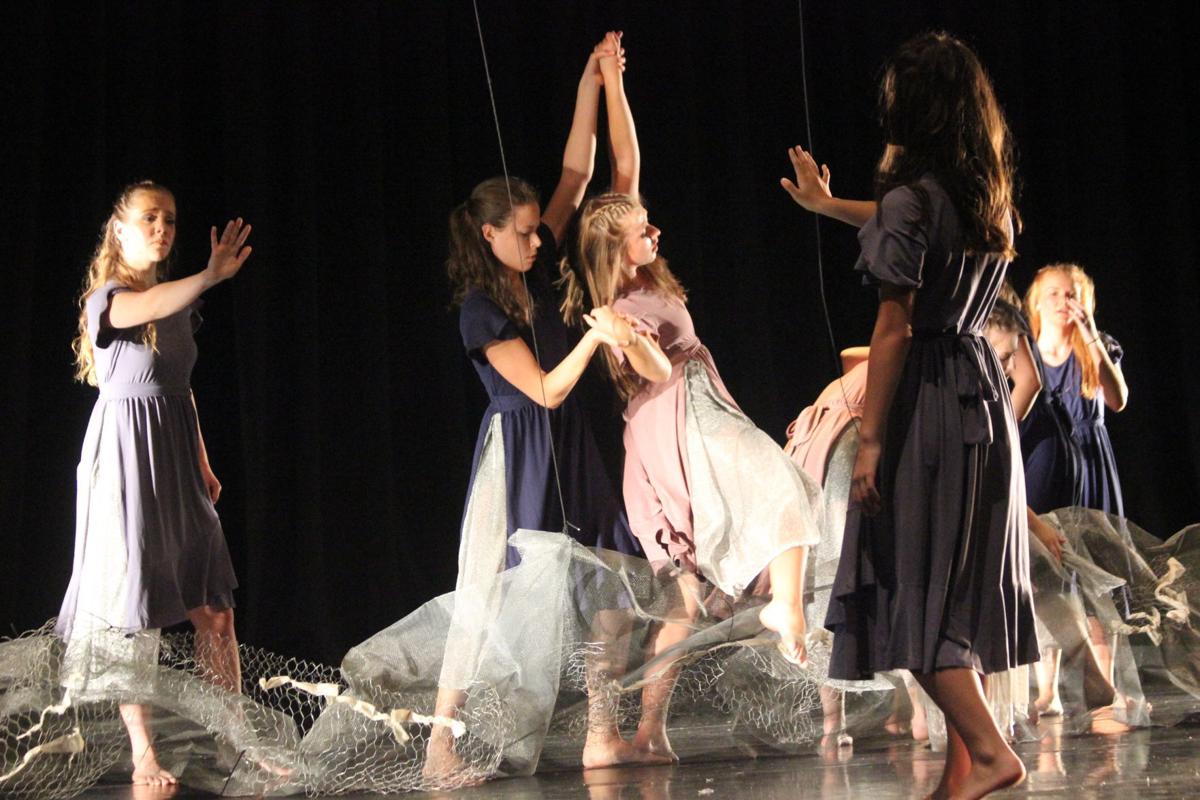 In the Project’s “Sanctuary,” the dancers were given three words – migration, immigration and evolution – and barrier to create their piece. 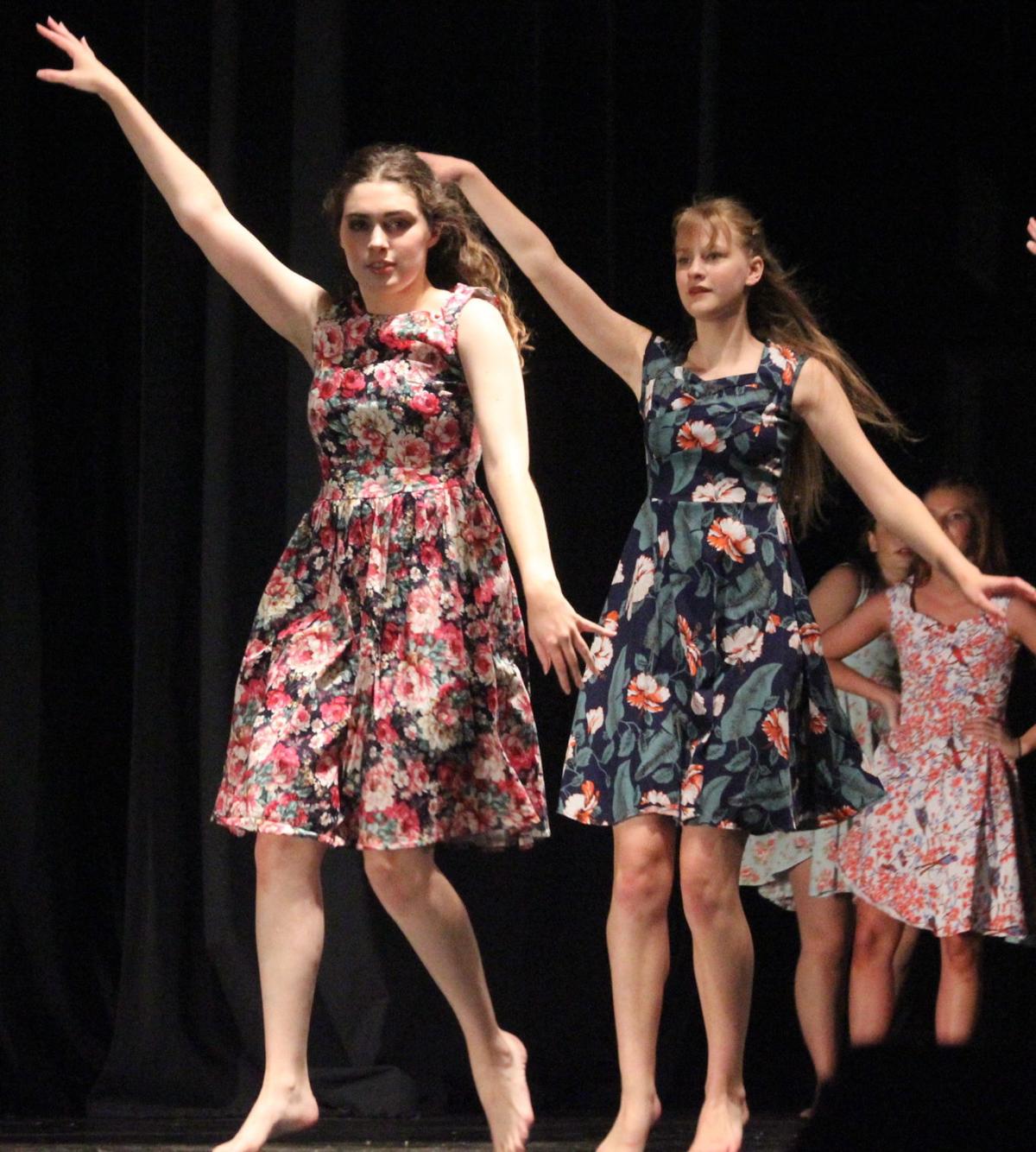 Claire Bailey, left, and Cameron Stevens dance to one of the Jim Croce songs featured in the piece “Time in a Bottle.” 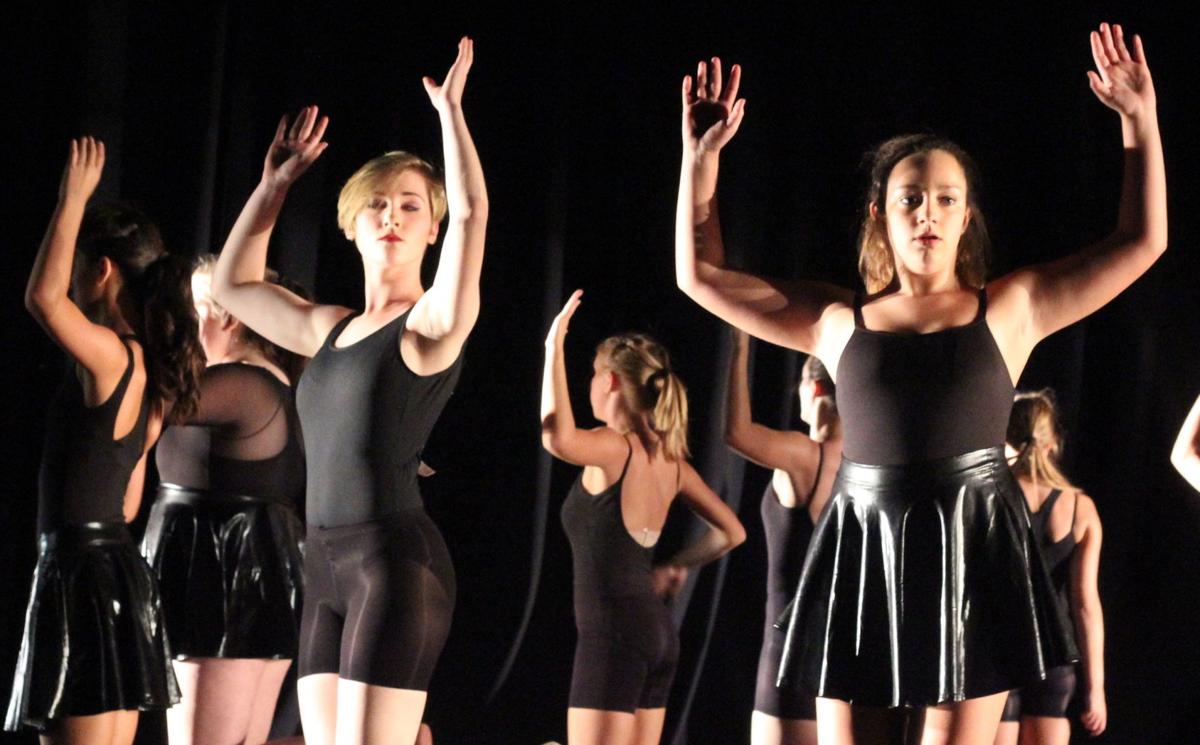 The project’s piece “Toe The Line” took on a dark theme featuring the full cast.

Gwyn Clemons, far right, and the rest of the Doniphan Dance Project cast close the humorous opening piece, “Classical Meltdown,” of the company’s Aug. 1 concert at the Tupelo Civic Auditorium.

Roxie Thomas Clayton, artistic director of the Doniphan Dance Project applauds her cast of dancers at the end of the Aug. 1 concert in the Tupelo Civic Auditorium.

In the Project’s “Sanctuary,” the dancers were given three words – migration, immigration and evolution – and barrier to create their piece.

Claire Bailey, left, and Cameron Stevens dance to one of the Jim Croce songs featured in the piece “Time in a Bottle.”

The project’s piece “Toe The Line” took on a dark theme featuring the full cast.

TUPELO • The audience that gathered in the Tupelo Civic Auditorium earlier this month for a dance performance was treated to an imperfect start.

Two dozen young women came out on the stage, but they spent the opening minutes basically goofing off. They did jumping jacks, some ran from one side of the stage to the other, played rock-paper-scissors or just stood around and talked.

When they finally lined up and the music began, their dance movement wasn’t the smoothest. Some of their steps and kicks were off. They began dancing the Can-Can, and one dancer pretended to hold her bleeding nose after being bumped. Another dancer ran off stage to grab a baton and began twirling. They finally closed the piece when they lined up and stumbled into their splits at the end of the “William Tell: Overture.”

The audience loved it.

Roxie Thomas Clayton, the founder and artistic director of Doniphan Dance Project, explained in the concert program the lighthearted start.

“This piece is so fun. I took from all my experiences as a dancer and created a piece basically making fun of myself,” she wrote.

“Classical Meltdown” was the opening of a seven-piece event filled with a wide range of thought-provoking images and emotions through dance.

The purpose of her project, according to Clayton, is to introduce dance where they can be given ideas and then take ownership of their movements.

“There’s nothing wrong with a dance recital, but this is so much more than that,” she said. “It’s like a dance concert. It has a lot of depth and originality.”

Clayton, a Tupelo native, received her dance training at the North Mississippi Dance Centre and is now a teacher there. She brought home the concept of modern dance after receiving her master’s in dance at Shenandoah University in Virginia and living and dancing in the Washington, D.C., area.

“I wasn’t really exposed to modern dance until I went to college,” Clayton said. “I wanted to bring it back to my community and also figure out a way to find students or youth in the community who maybe wouldn’t have the opportunity to have that experience because of money or they’re not knowledgeable of it.”

This year’s Doniphan Dance Project dancers ranged from pre-teens to women in their early 20s. Not all have had formal dance training. There are no formal auditions for the project; potential members gather at what Clayton calls “movement meet-ups” that allow them to decide if they want to be a part of Doniphan.

For now, Doniphan is a summer project that begins with rehearsals in June and wraps up in August with the concert.

“I have dancers who’ve never danced a day in their lives and I have dancers who are majoring in it in college,” Clayton said. “Some people are like ‘that’s never going to work,’ but it works beautifully because there’s an expectation of showing up. There’s nothing really hanging over their heads by the the fact they’re willing to be a part of it and want to put in the time.”

Gwyn Clemons of Oxford has been a participant in Doniphan for three years. Clemons learned about the project from Clayton, who’s also a full-time adjunct instructor of dance at the University of Mississippi.

“I need somewhere to dance. I didn’t want a competition studio. I wanted a community,” Clemons said. “We have fun in the rehearsals. Of course, it’s serious because we’re creating a production, but it’s not the same as a ballet production where everyone looks the same way or dances the same way. We can be ourselves and we can have fun and enjoy the environment.”

Doniphan also lets the dancers have a part in the choreography. Clemons choreographed two pieces this year: “A Rhythmic Duo,” a tap-dancing number with her and Tupelo’s Carrol Trent Imbler, and “Time in a Bottle” that features three songs by the late singer-songwriter, Jim Croce.

Clayton said she likes giving the dancers ownership of the pieces.

“We take (dance) composition classes in college to learn how to compose dance. It would be like if you would compose a piece of music. You can compose a piece of movement,” she said. “When they’re able to do that, they take more ownership in the movement and the piece because they created part of it.

“I’ll say something like, ‘Let’s talk about this boundary we’ve created on the stage. Create a couple of movements or create a phrase where you felt you’ve been restricted or you felt like you were put in some kind of box, maybe a literal box or a hypothetical box. How does that make you feel and how can we put that in movement?’ It makes you think a little more, too.”

Anna Avery Jones, a Tupelo resident who has been attending college in Chicago, came home this summer for her first performance season with Doniphan.

“I love the wide variety of pieces,” Jones said. “We have a comedic piece, but we also have a really serious piece and one that’s hopeful. I think the wide range of acting we get to do and create different moods is great.”

Doniphan has become a new way for local teens like Claire Bailey, a 2019 Tupelo High School graduate who began dancing at age 3, to express themselves through dance. This was Bailey’s fourth year in Doniphan.

“Roxie said everyone is a choreographer,” said Bailey, now a freshman at Auburn University. “We all get a chance to create movement and play a part in it.”

Like Bailey, Tupelo High senior Lucy Hill started dancing at age 3 and has been in Doniphan four years.

“It’s different,” she said. “You can express yourself more in this type of dance. Everybody’s involved. She’ll ask us to come up with a phrase and we’ll put it all together and make a production number.”

Clayton said her long-range goal is to make Doniphan a year-round project and to have a greater presence in the community.

In addition to the two evening performances this month, Doniphan hosted a morning children’s performance that allowed kids to see some of the pieces and to interact with the dancers. Doniphan also hosted an empowerment camp for girls and a children’s camp, allowing the kids to create movement inspired by stories in a book.

As she shares her outreach dreams, Clayton said the project’s performances can make an impact in the community. She was elated with this year’s concert.

“I thought it was really successful,” she said. “I’m always blown away by the professionalism the dancers have on stage and the ownership they take in the project. It exceeds all my expectations. I wish more of the community could see the show because I think the people would be inspired by it.”

With each year, Clayton said she’s seen the potential for growth through modern dance and the Doniphan Dance Project.

“I’m hoping we have more dancers and more opportunities for us to be more present in the community,” she said. “I can’t wait for next year. I’m already thinking about what I’m going to do.”