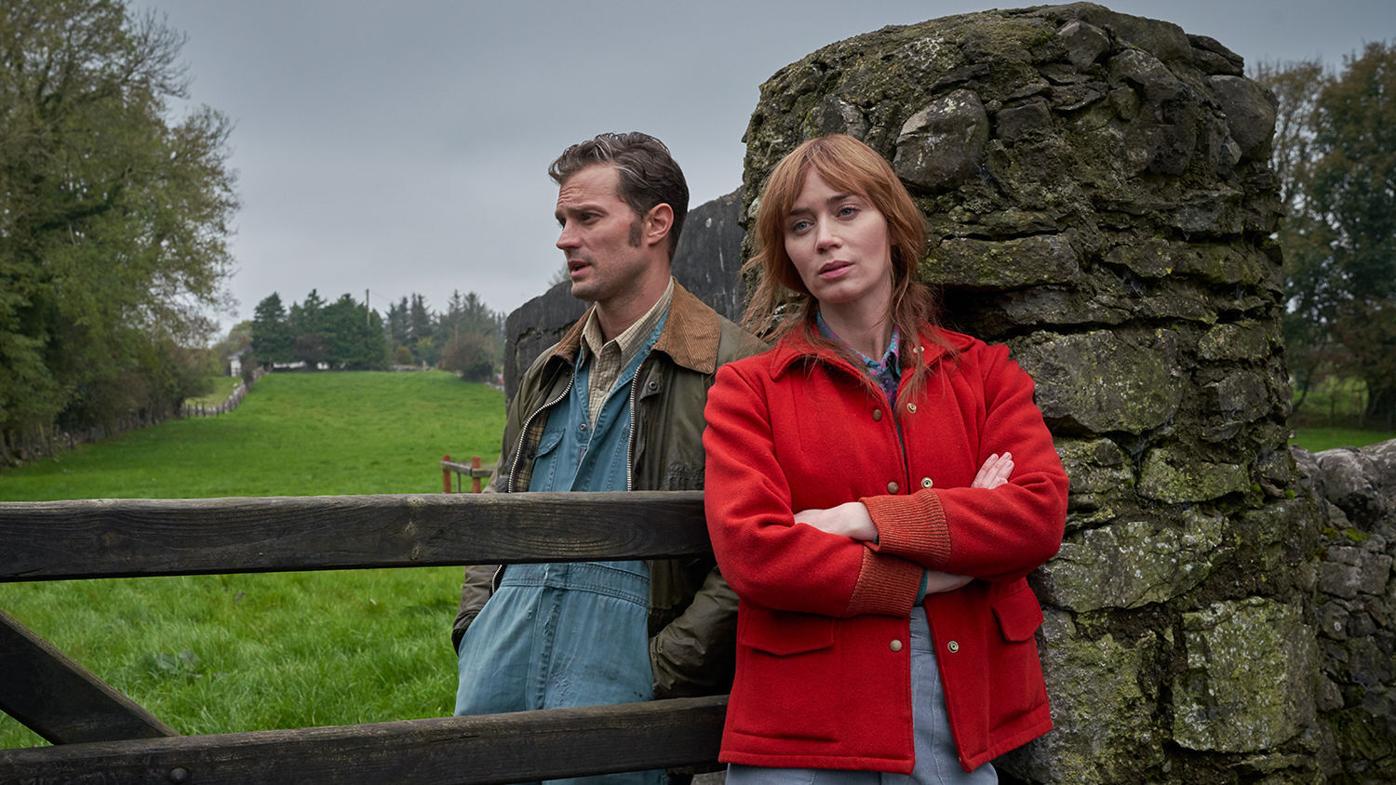 Jamie Dornan and Emily Blunt star in "Wild Mountain Thyme," which can be seen in theaters and on demand beginning Friday. The romance/drama also stars Christopher Walked and Jon Hamm. 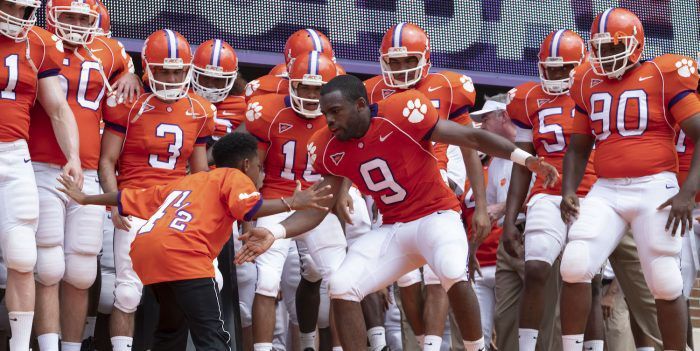 Jay Reeves (wearing No. 9) plays Ray Ray Elrathbey, the Clemson University football player who takes custody of his little brother, in "Safety." The Disney sports drama will be released Friday on Disney+. 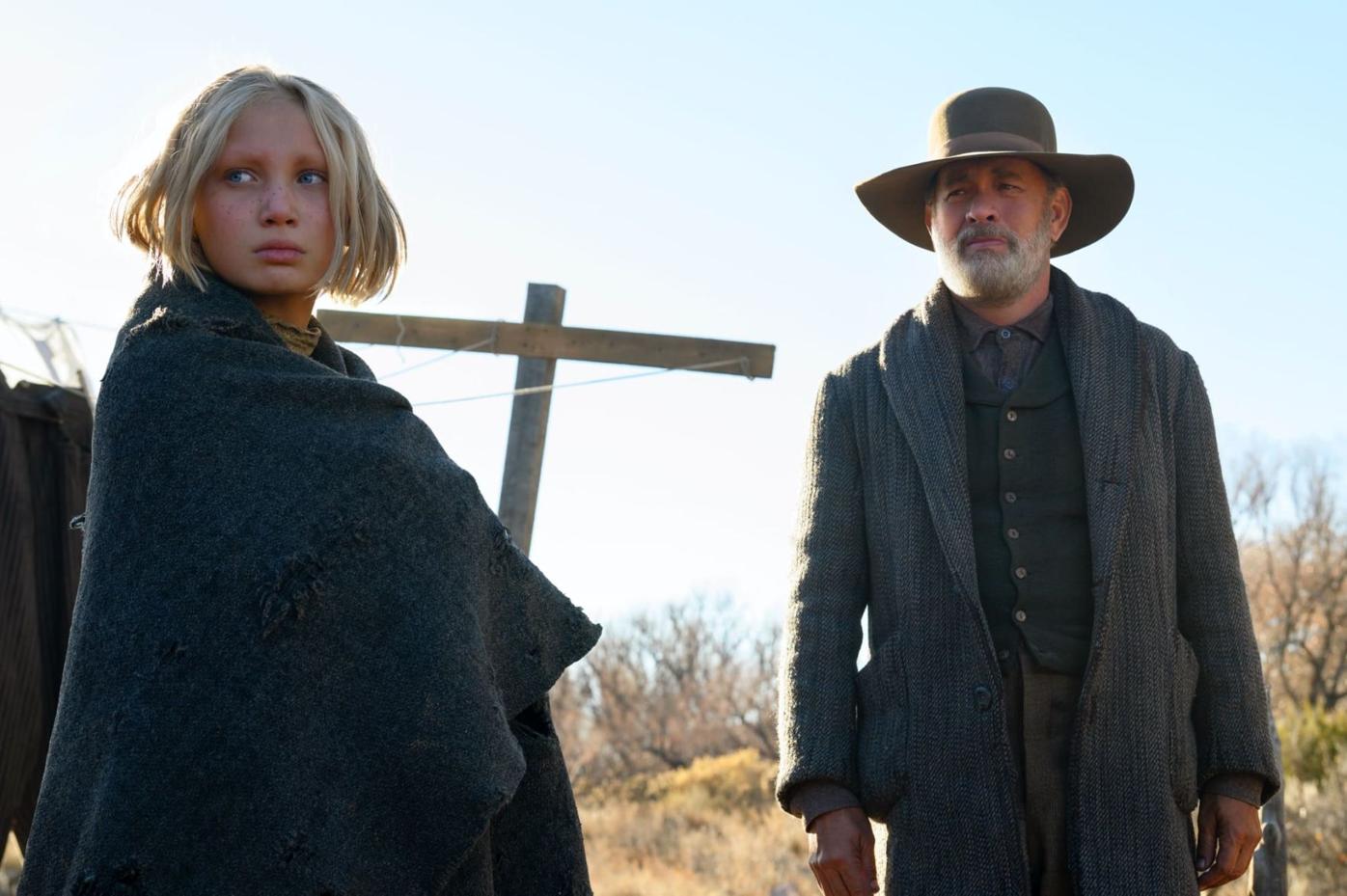 Tom Hanks plays a Civil War captain who agrees to escort a 10-year-old girl (Helena Zengel) across Texas in “News of the World.” The movie will be released Christmas Day in theaters nationwide. 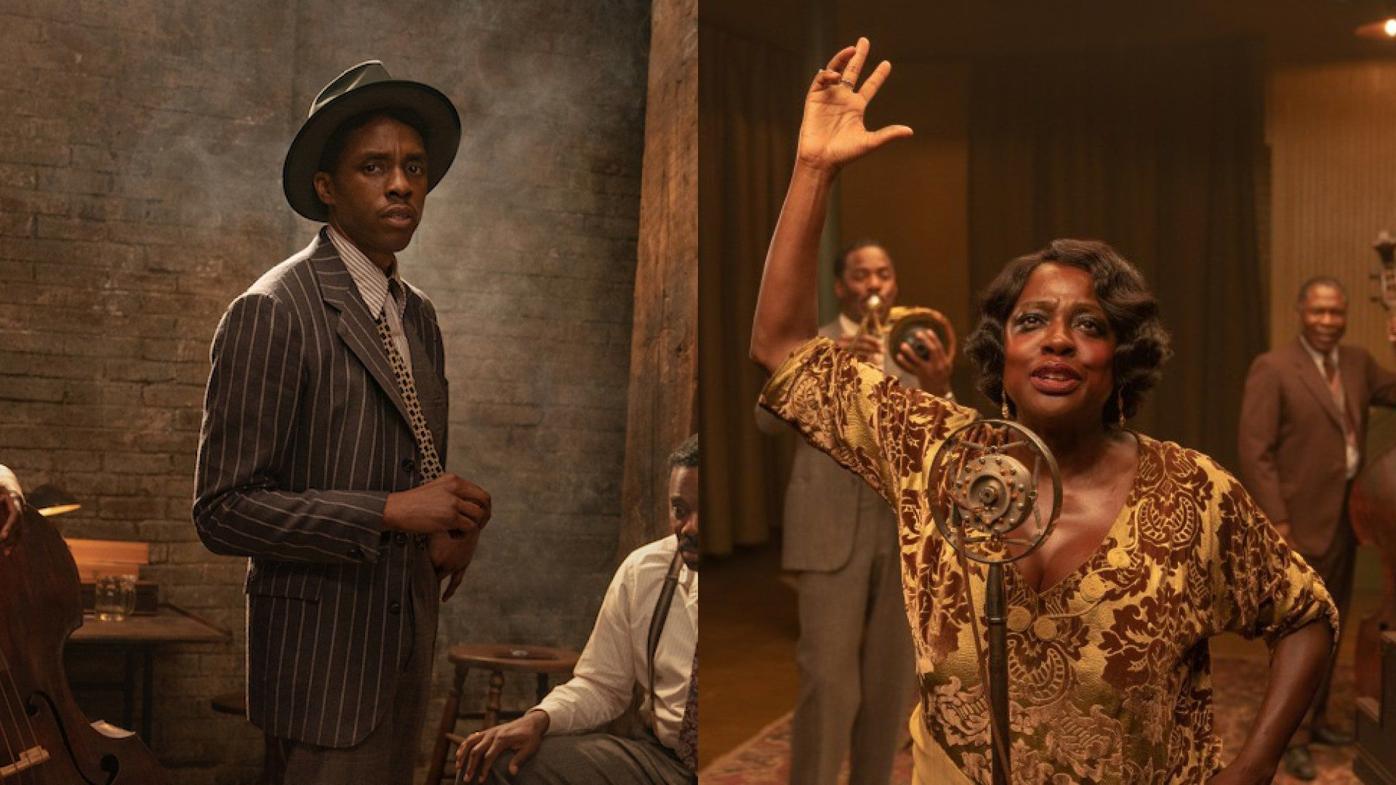 Chadwick Boseman, left, and Viola Davis star in “Ma Rainey’s Black Bottom,” which will be available Dec. 18 on Netflix. Davis portrays Rainey, know as the Mother of the Blues. Boseman’s role in the film was his last; he died Aug. 28.

Jamie Dornan and Emily Blunt star in "Wild Mountain Thyme," which can be seen in theaters and on demand beginning Friday. The romance/drama also stars Christopher Walked and Jon Hamm.

Jay Reeves (wearing No. 9) plays Ray Ray Elrathbey, the Clemson University football player who takes custody of his little brother, in "Safety." The Disney sports drama will be released Friday on Disney+.

Tom Hanks plays a Civil War captain who agrees to escort a 10-year-old girl (Helena Zengel) across Texas in “News of the World.” The movie will be released Christmas Day in theaters nationwide.

Chadwick Boseman, left, and Viola Davis star in “Ma Rainey’s Black Bottom,” which will be available Dec. 18 on Netflix. Davis portrays Rainey, know as the Mother of the Blues. Boseman’s role in the film was his last; he died Aug. 28.

Are you tired of the overload of Christmas movies on television? If so, there are other choices coming this month over a wide range of platforms and in theaters.

Some of the major national releases on Christmas Day include Tom Hanks’ latest, “News of the World,” and the Gal Gadot superhero renewal of “Wonder Woman 1984.” Some of the pre-Christmas streaming headliners include three movies based from plays or musicals: “Ma Rainey’s Black Bottom,” “The Prom” and “Wild Mountain Thyme.”

A majority of the new releases will be available for viewing Friday. The following is a list of upcoming movies by release date. Plot information compiled from various sources:

The headstrong farmer Rosemary Muldoon (Emily Blunt) has her heart set on winning her neighbor Anthony Reilly’s love. The problem is Anthony (Jamie Dornan) seems to have inherited a family curse, and remains oblivious to his beautiful admirer. Stung by his father Tony’s (Christopher Walken) plans to sell the family farm to his American nephew (Jon Hamm), Anthony is jolted into pursuing his dreams in this comedic, moving and wildly romantic tale. Based on the Broadway hit “Outside Mullingar.”

A troupe of hilariously self-obsessed theater stars swarm into a small conservative Indiana town in support of a high school girl who wants to take her girlfriend to the prom. Features an all-star cast including Meryl Streep, James Corden, Kerry Washington, Keegan-Michael Key and Nicole Kidman.

Paul Hogan is reluctantly thrust back into the spotlight as he desperately attempts to restore his sullied reputation on the eve of being knighted. Also stars Mel Gibson, Chevy Chase and John Cleese.

“Safety” is a drama inspired by the empowering story of former Clemson University football safety Ray McElrathbey (Jay Reeves), a young man facing a series of challenging circumstances, whose dedication and persistence help him to triumph over repeated adversities. Aided by his teammates and the Clemson community, he succeeds on the field while simultaneously raising and caring for his 11-year-old brother Fahmarr (Thaddeus J. Mixson).

An account of the two women convicted of assassinating Kim Jong-un’s half-brother, Kim Jong-nam. The film follows the women’s trials in an attempt to understand whether they are trained killers or simply pawns.

New parents Adrienne (Sienna Miller) and Matteo (Diego Luna) are forced to reckon with trauma amidst their troubled relationship. They must revisit the memories of their past and unravel haunting truths in order to face their uncertain future.

In this 1970s set crime drama, a woman is forced to go on the run after her husband betrays his partners, sending her and her baby on a dangerous journey. Stars Rachel Brosnahan and Marsha Stephanie Blake.

Tells the story of a Grandfather who, after suffering a devastating loss, is sent into a downward spiral and loses his inspiration to create. Years later, he decides to revisit the easel, and pick up the paint brush… but he can’t do it alone.

A group of friends stumble upon a mirror that serves as a portal to a ‘multiverse.’ They soon discover that importing knowledge from the other side in order to better their lives brings increasingly dangerous consequences. Stars Ami Ameen, Martin Wallstrom and Kathleen Quinlan.

Police discover an elite fight club where they find seven underground levels, filled with the dead bodies of fighters from around the world. Only one man is found left alive. The task force has to work out if he’s a mass murderer or the lone survivor? Stars Moe Dunford, Kate Dickie and Camille Rowe.

Documentary looks at the daily life of a pig and its farm animal companions: two cows and a one-legged chicken. Executive produced by Joaquin Phoenix.

After the sudden death of her best friend, a straight-A, obedient teen sets out to fulfill their secret list of outrageous acts they said they’d never do. Stars Fivel Stewart and Brenna D’Amico.

When ordered to serve a year in rehab, actress Candy (Drew Barrymore) hires her on-set stand-in to take her place. The unassuming woman flips the script and steals her identity, career and boyfriend in this hilarious comedy about trading places.

A winter diving trip in Norway turns into a desperate race against time for two sisters when one of them becomes trapped at the bottom of the ocean by falling rocks.

A family fights for survival as a planet-killing comet races to Earth. John Garrity (Gerard Butler), his estranged wife Allison (Morena Baccarin), and young son Nathan make a perilous journey to their only hope for sanctuary.

Tensions rise when the trailblazing Ma Rainey (Viola Davis), the Mother of the Blues, and her band gather at a Chicago recording studio in 1927. Adapted from August Wilson’s play. Also stars Chadwick Boseman in his last film role and Glynn Turman.

“Sister of the Groom”

Alicia Silverstone (Clueless) and Tom Everett Scott (That Thing You Do) star in a destination wedding weekend gone off the rails. Audrey (Silverstone) struggles with turning 40 while meeting her new seemingly perfect sister-in-law. Audrey and her loyal husband (Scott) throw the weekend into a tailspin of embarrassing series of mishaps.

Anthony Hopkins plays a man who refuses all assistance from his daughter as he ages. As he tries to make sense of his changing circumstances, he begins to doubt his loved ones, his own mind and the fabric of his reality.

This post-apocalyptic tale follows Augustine (George Clooney), a lonely scientist in the Arctic, as he races to stop Sully (Felicity Jones) and her fellow astronauts from returning home to Earth, where a mysterious global catastrophe has taken place.

“News of the World”

Five years after the end of the Civil War, Capt. Jefferson Kyle Kidd (Hanks) crosses paths with a 10-year-old girl (Helena Zengel) taken by the Kiowa people. Forced to return to her aunt and uncle, Kidd agrees to escort the child across the harsh and unforgiving plains of Texas. However, the long journey soon turns into a fight for survival as the traveling companions encounter danger at every turn — both human and natural.

A young woman, traumatized by a tragic event in her past, seeks out vengeance against those who cross her path. Stars Carey Mulligan, Connie Britton and Alison Brie.

“One Night in Miami”

Soul introduces Joe Gardner, a middle-school band teacher whose true passion is playing jazz. Just when Joe thinks his dream might be in reach, a single unexpected step sends him to a fantastical place where he’s is forced to think again about what it truly means to have soul. Features the voices of Jamie Foxx and Tina Fey.

Deep in the forests of Piedmont, Italy, a handful of men, 70 or 80 years young, hunt for the rare and expensive white Alba truffle, which to date has resisted all of modern science’s efforts at cultivation.

When Lt. Artemis and her loyal soldiers are transported to a new world, they engage in a desperate battle for survival against enormous enemies with incredible powers. Feature film based on the video game by Capcom. Stars Milla Jovovich, Tony Jaa and T.I.