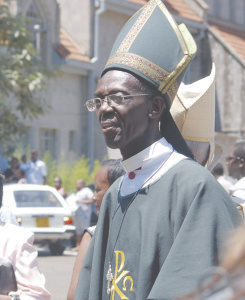 Archbishop Eliud Wabukala, the primate of Kenya, who is the chairman of GAFCON. (Fredrick Nzwili/RNS) 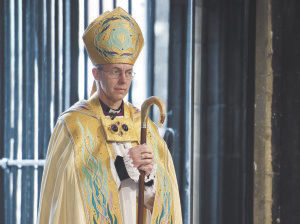 Archbishop of Canterbury Justin Welby has called a meeting of the Anglican Communion in January. Local Episcopals expect the meeting to address disagreements within the Communion, or at least soothe feelings of harshness. (Leon Neal/AFP)

Archbishop Eliud Wabukala, the primate of Kenya, who is the chairman of GAFCON. (Fredrick Nzwili/RNS)

Archbishop of Canterbury Justin Welby has called a meeting of the Anglican Communion in January. Local Episcopals expect the meeting to address disagreements within the Communion, or at least soothe feelings of harshness. (Leon Neal/AFP)

Earlier this month, Archbishop of Canterbury Justin Welby called for a gathering of the Anglican Communion in what is expected to be an attempt at healing.

The Anglican Communion has been troubled following the 2003 induction of the first openly gay bishop, Gene Robinson, by the Episcopal Church of the United States. In response to Robinson’s election, the church’s more conservative bishops created a subset within the communion in 2008, the Global Anglican Future Conference, holding their own meetings and creating their own jurisdictions.

“As of now, the GAFCON primates have said that if the Anglican Church of Canada and the U.S. is at the table for the January meeting, they will not attend,” said the Rev. Paul Stephens, rector at All Saints’ Episcopal Church in Tupelo, “And that’s unfortunate.”

“In terms of authority, the Archbishop of Canterbury isn’t like the Pope. He doesn’t have the jurisdiction to ‘make’ me do anything, though if he did I would almost certainly acquiesce,” Stephens said. “Anglican provinces have autonomy, and make their own rulings within themselves that don’t have bearing on the others. However, there’s a saying that goes something like, ‘If someone sneezes at an Episcopal church in Corinth, someone at an Episcopal church in Bay St. Louis will say “Bless you.”’”

Provinces are bound in spirit through the Instruments of Communion – the Archbishop of Canterbury, the Lambeth Conference, the Anglican Consultative Council, and the Primates’ Meeting.

The Lambeth Conference occurs every 10 years, and is a gathering of bishops to discuss matters and pass resolutions.

Stephens said he will be curious to see how this January meeting will be managed.

“It’s been written by some sources that the Archbishop is politically astute. So far, he has invited primates to come to England merely for a gathering,” Stephens said. “He might convene with the American and Canadian bishops on day one, then with the GAFCON bishops on day two. Who knows? My prayer is for everyone to sit around the table and share the common cup.”

Following the induction of Robinson as bishop of New Hampshire, some diocesan bishops in America sought to bring themselves under the authority of foreign bishops, for example, the bishop of Uganda, According to Stephens.

Bishops in the Anglican Communion have jurisdiction within their diocese, and for foreign bishops to travel to America to direct these breakaway congregations – somewhat in secret – has caused some bad blood.

Columbus resident Morris Thompson, an Episcopal deacon on track to the priesthood, said as far as America goes, the church’s involvement with the legal system has made things troublesome at times.

“Somewhere along the line, the church got entwined with the legal system, and the church became the method by which people were legally married. For us, it’s partly an issue of terminology,” Thompson said. “Until this year, Episcopal ministers could only ‘bless’ relationships because to marry same sex couples wasn’t legal everywhere. ‘Blessing’ was a more accurate terminology. A lot of people left the church after Robinson was elected bishop. Since then, I haven’t seen as many people leave over the issue, but that’s not to say people don’t struggle with it.

Though same sex marriage is possibly the most hot-button topic dividing the church, it is far from the only one.

The farther the church stretches itself across the globe, the more it is liable to disagreements in theology and policy.

“One issue that isn’t as big anymore is the decision is that the current head of the Episcopal church is a woman – Katharine Jefferts Schori,” Thompson said. “She’s nearing the end of her nine-year term, and in those nine years, things have come a long way, but some bishops bristled at a woman in such a position then. But she’s tough and showed them what she could do.”

The Anglican Communion has between 70 and 80 million members worldwide, an intimidating number when it comes to making resolutions that benefit everyone.

Thompson, however, is optimistic. Diversity is a double-edged sword, but the spirit of unity and the opportunity to learn from one another is priceless, he said, and far outweighs the convenience of consensus.

“Working alone, a church can only do so much,” he said. “Working together, even across denominational lines, is a reminder of something greater than our own church.”

Thompson also noted the newness of the Anglican Church, in perspective to the history of Christianity. The Church of England separated from the Catholic Church in the 1500s, and Anglicanism didn’t become global until the 17th and 18th centuries.

“We’re still in relatively uncharted territory on how to build a community with many different beliefs,” he said.

“The Anglican Communion is only a few hundred years old. I think of these kinds of things as growing pains.”

Stephens agreed. The tent, he said, is wide, but it is a blessing.

“Certainly different contexts and perspectives can cause friction, but this diversity is what allows us to thrive,” he said. “What binds us as Anglicans is bigger than our issues, that is, the abiding love of Christ.”