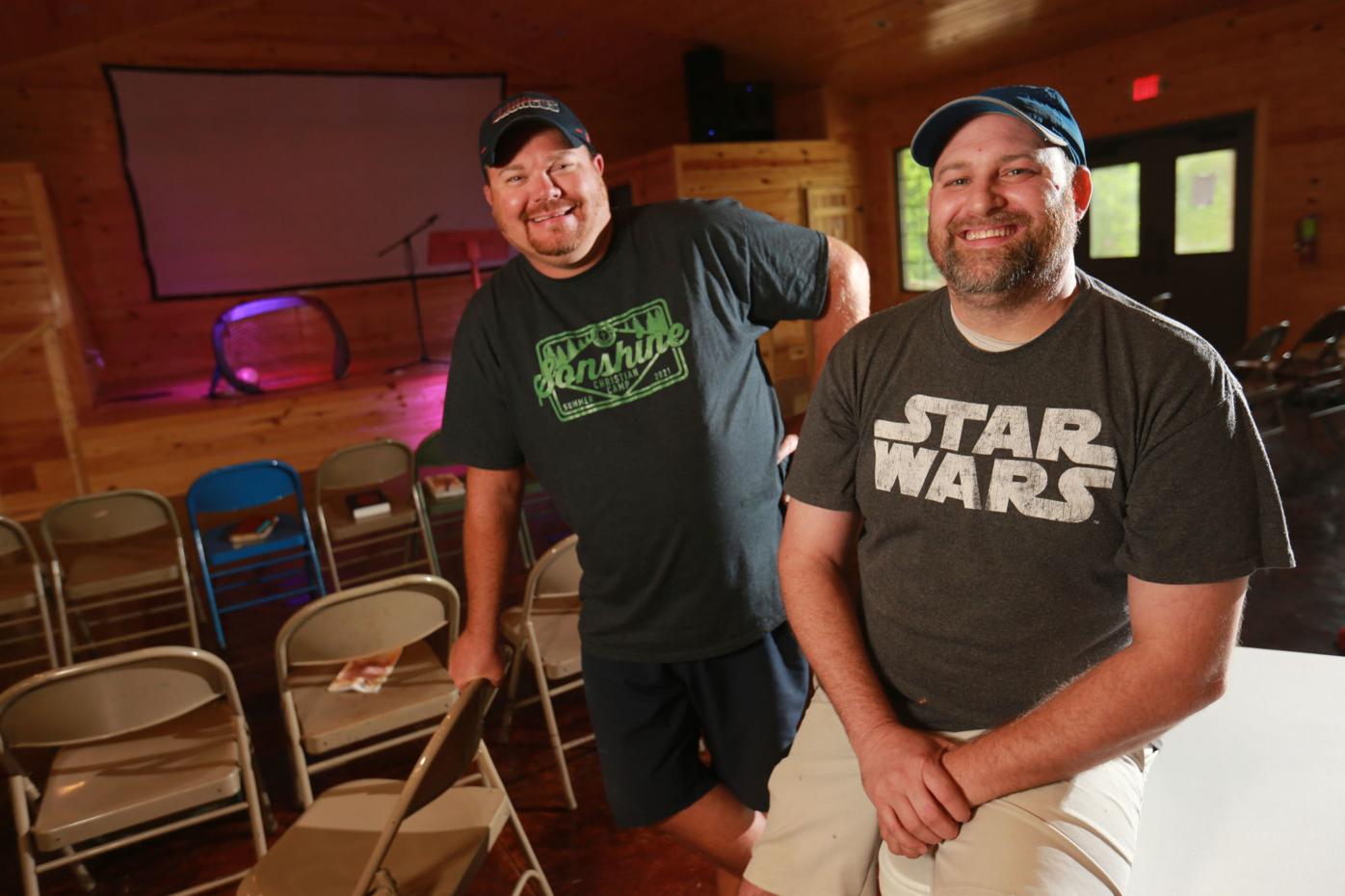 Staffers at Sonshine Christian Camp near Baldwyn, Ryan Christman, left, and R-Kay Willardson, love the work they do. They believe a summer camp provides the perfect environment to mold young minds and instill within them Christian values. Plus, have a little adventure. 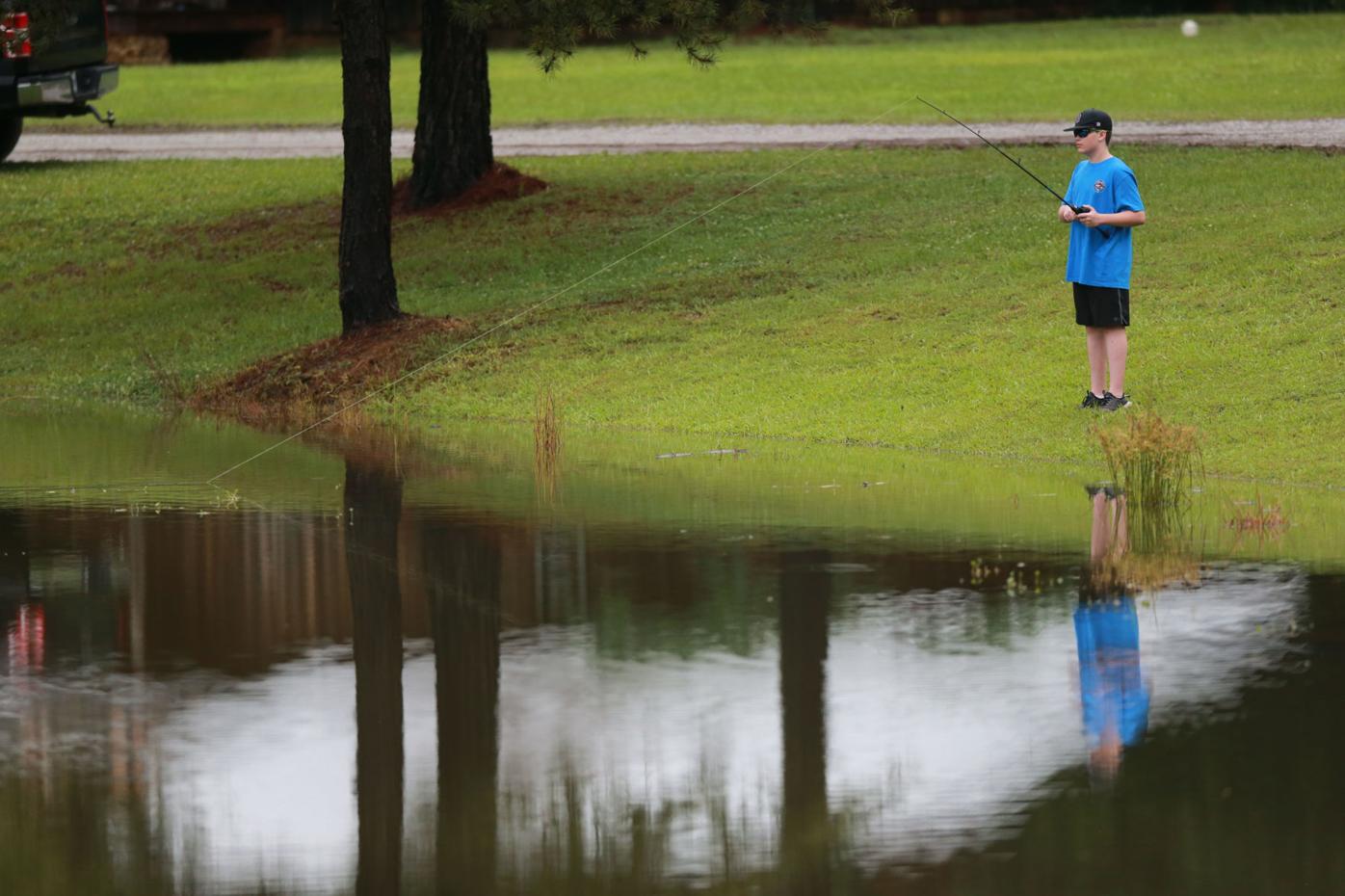 A camper enjoys a little time fishing in the lake before moving on to other activities offered at Sonshine Christian Camp near Baldwyn.

Staffers at Sonshine Christian Camp near Baldwyn, Ryan Christman, left, and R-Kay Willardson, love the work they do. They believe a summer camp provides the perfect environment to mold young minds and instill within them Christian values. Plus, have a little adventure.

A camper enjoys a little time fishing in the lake before moving on to other activities offered at Sonshine Christian Camp near Baldwyn.

BALDWYN • It’s been a soggy week for the 43 senior high campers gathered at Sonshine Christian Camp just north of Baldwyn. But even with the rain, spirits are high as the week winds down.

The weather is unseasonably cool. As a fire crackles in the massive stone fireplace in the dining hall overlooking the lake, camp staffers Ryan Christman and R-Kay Willardson agree they wouldn’t want to be anywhere else.

“Camp is just in my DNA,” 42-year-old Willardson said. “I’ve been doing youth ministry for about 22 years, and I thrive on camp. If I weren’t here, I’d be home thinking about what’s happening at camp.”

Willardson is the senior minister at CommonGround Christian Church in Wren, where he and his family have served for the last five years. He said the late nights, the drama, and the fatigue of a week of camp are all worth it when he sees the payoff.

“The biggest joy in my life is seeing hearts change for Jesus,” he said. “That’s my million-dollar paycheck. I’ll probably never get rich in ministry, but the reward is rich when you see the light begin to come on for a kid. That stuff is awesome for me.”

While social media and cultural shifts have created new challenges for youth ministry, Willardson said the baseline needs of a young person at camp are timeless.

“Kids need acceptance,” he said. “They’re trying to figure out who they are and where they fit. It may sound cheesy, but it all comes down to showing them love.”

Especially in the aftermath of COVID-19, Willardson said technology-addled teens are grateful for a chance to reconnect with others.

“They’re happy to not be on a screen,” he said. “That’s one thing about COVID –people are worn out from Zoom calls and virtual stuff. Just being truly present here is a huge win for most of them.”

“We’re trying to change lives, not just make a better connection with the environment,” he said. “We want to affect people for eternity. We want our kids to do great things in society, but I’m way more concerned with what happens after this life. It’s all about sharing the grace and mercy of Jesus Christ.”

Ryan Christman is the youth minister at Itawamba Christian Church in Fulton, and the dean of senior high week at Sonshine. At 46 years old, he is a veteran of scores of paintball wars and a seasoned hand at summer camp.

“Youth ministry is controlled chaos,” he said. “The goal is to make everything safe for the parents and make it look dangerous for the kids.”

Over the years, Christman said he has developed a philosophy of youth ministry borne out by long experience.

“You have to rely on God and trust kids about as far as you can throw them,” he said with a chuckle.

Like Willardson, Christman said church camp has always been a vital part of his life.

“I remember what I experienced at camp,” he said. “So many memorable moments – the friends, the lessons, the experiences, and the adults who were taking time out just to hang out with us. It spoke volumes to me. Now I get to share those same things with kids.”

While many youth ministers eventually transition to senior ministry, Christman prefers working with students, who he says tend to be more open to spiritual growth than adults.

“This is what I want to do for the rest of my life,” he said. “I love working with kids because they’re malleable and moldable. As they get older that clay starts to set. My goal is to grow them and teach them the essentials. Then, when they’re ‘set,’ they’re in the form they need to be in.”

According to Christman, young people need to be reminded to take the “long view” when it comes to the emotional, relational, and spiritual struggles they all face.

“They need to know it’s gonna be ok,” he said. “They’re dealing with all these emotions and questions and ideas. I’m there to say, ‘If I got through all of this, you can too.’ God can do more than we imagine through the work of the spirit. I’m there to give them hope and remind them that whatever they’re going through, it isn’t the end of the world.”

Along with a tolerance for a certain level of chaos, Christman said the years have taught him another secret of a successful week of camp.

“You have to bathe it in prayer,” he said. “By the grace of God it all works out.”

“I love working with kids because they’re malleable and moldable. As they get older that clay starts to set. My goal is to grow them and teach them the essentials. Then, when they’re ‘set,’ they’re in the form they need to be in.”

The saddle and the pew: Thaxton pastor sows seeds with cowboy church

THAXTON • “You can’t be Christian and cowboy at the same time.”

'It's a calling': Tupelo transplant Owen McCulloch has been a Scout his entire life

AMORY • Dr. JJ VanYperen of Amory is a podiatrist by day and the front man for a grunge/rock band by night.