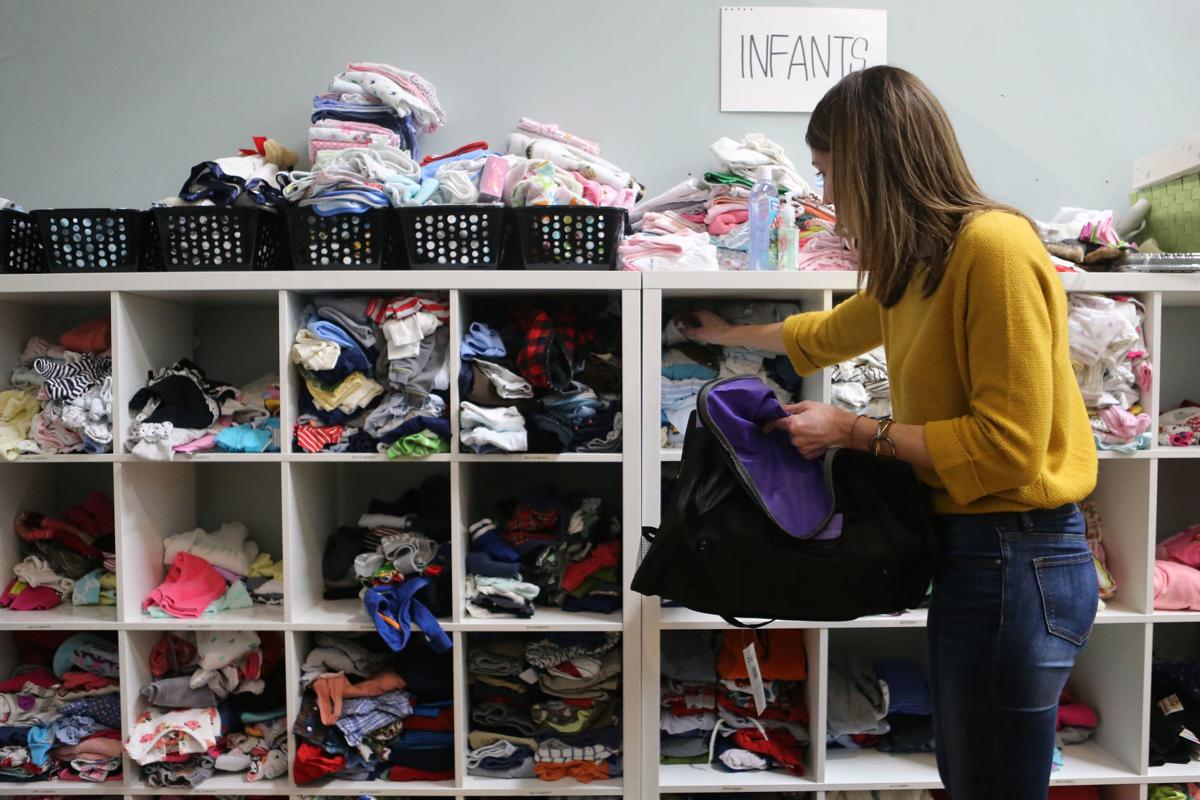 Katie Gann loads a bag with clothing from the shelves of The Refuge at Northstar Church in Tupelo on Monday. The Refuge is a ministry that provide supplies and clothes for foster children. 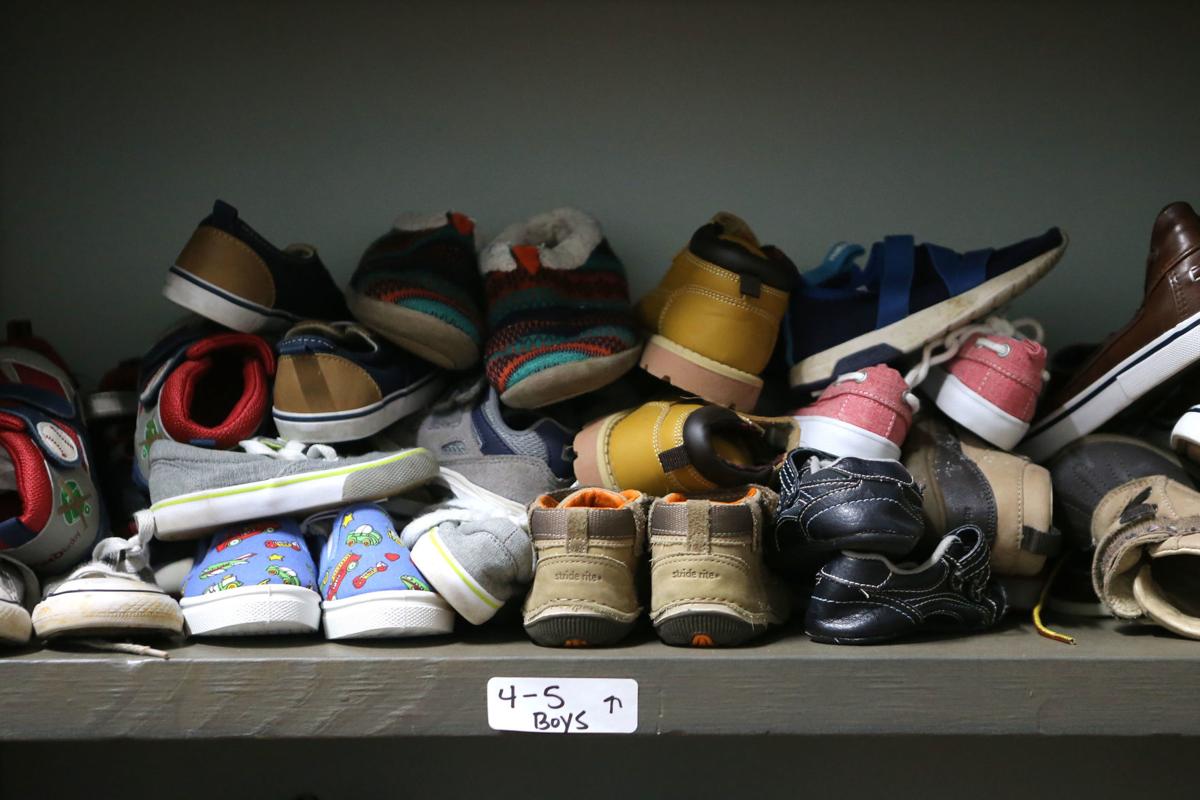 Shoes for toddler boys sit on a shelf of The Refuge at Northstar Church in Tupelo on Monday. 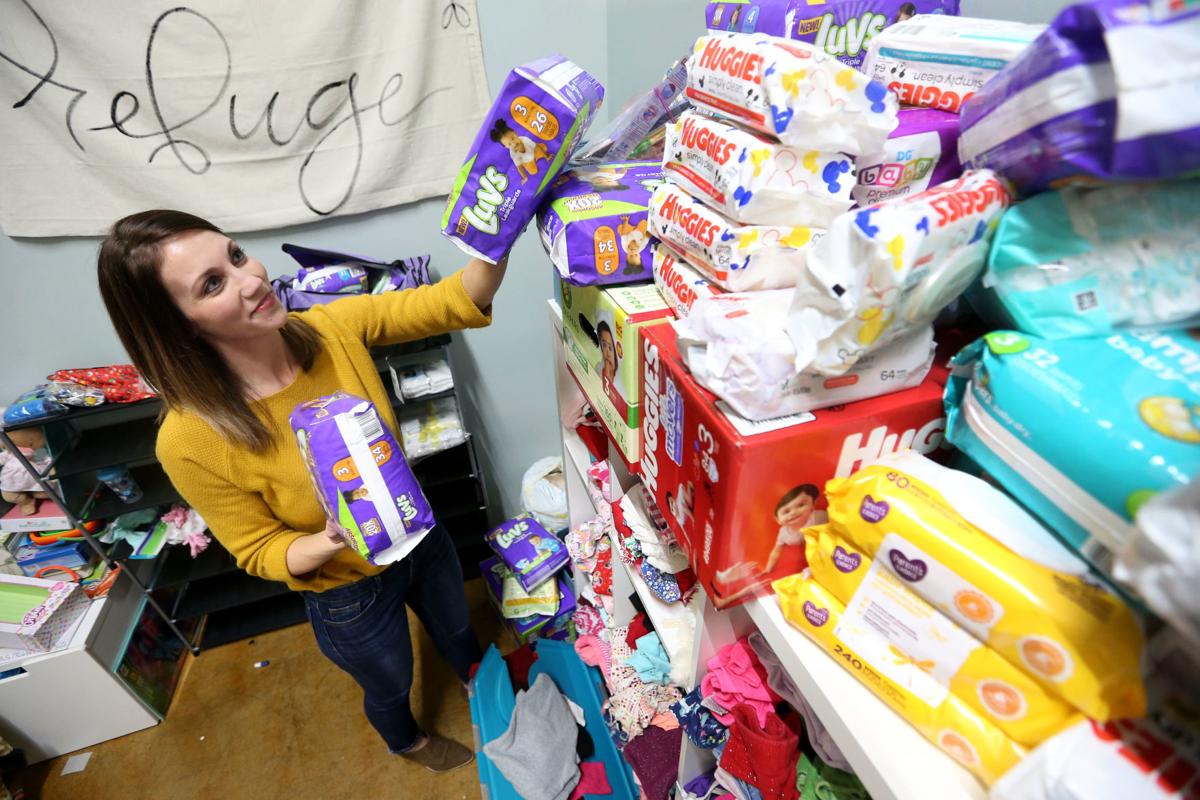 Katie Gann sorts diapers and other items on the shelf of The Refuge at Northstar Church in Tupelo on Monday. The Refuge is a ministry that provides supplies and clothes for foster children.

Katie Gann loads a bag with clothing from the shelves of The Refuge at Northstar Church in Tupelo on Monday. The Refuge is a ministry that provide supplies and clothes for foster children.

Shoes for toddler boys sit on a shelf of The Refuge at Northstar Church in Tupelo on Monday.

Katie Gann sorts diapers and other items on the shelf of The Refuge at Northstar Church in Tupelo on Monday. The Refuge is a ministry that provides supplies and clothes for foster children.

TUPELO • It can be pretty overwhelming to be a foster parent.

The call from Child Protective Services often comes in the middle of the night, and the child or children may arrive with nothing but the clothes on their backs, seeking refuge.

“The Refuge” foster care closet at Northstar Church on McCullough Boulevard in Tupelo is there to make things a little easier for those children and their foster parents.

Formerly a Northstar classroom, The Refuge is stocked floor-to-ceiling with diapers, clothes, toys, shoes, sheets, food, even beds and bedding – all the things foster parents need, and often have no time to gather, when the call comes.

A brochure from the ministry states its mission: “Christ rescued and redeemed us from our brokenness and adopted us into His eternal family (Galatians 4:5-7); we want to show the love of Jesus to the children of broken earthly families and support foster care/adoptive families along their journey.”

Katie Gann has been the director of The Refuge since its inception in January of 2018. She said she realized the need for such a ministry after she and her husband and their two biological children welcomed a pair of foster boys – both toddlers – to their own home in 2018.

“It amazed me,” she said. “They really do come with nothing, usually from a not-safe environment. You’re not sure when the call will come and you don’t want to say ‘no.’ It’s not like having a baby, where you have nine months to prepare.”

Gann is a nurse practitioner at North Mississippi Medical Center in Tupelo. Her husband, Scott, coaches baseball at Tupelo High School. With two young children of their own to consider, Gann said their fostering experience was eye-opening.

“It was very wild,” she said with a smile. “We got them at night, and we went to Walmart the next day. We had to get car seats and clothes – everything. We didn’t even know what they’d eat.”

Gann said it didn’t take long for her to realize other foster parents, in an already stressful situation, were facing the same hurdle every day.

“We began talking in my small group,” she said. “We said, ‘This is a ministry.’ We started with a clothes closet that we’d do once a month – basically Walmart for foster parents.”

“It’s turned into a full-time job,” she said. “Child Protective Services loves us, because they know we’ll get it done. They call us almost every day.”

After serving 58 families and 148 individual children since it began, Gann said the volunteers at The Refuge “know the drill.”

“When a family comes to The Refuge, we try to fill their car up,” she said. “It’s just so overwhelming when you get a child; there’s so much to think about and so much to do.

“We’re just trying to take as much stress off of the family as we can.”

Once a foster family’s car is loaded with supplies, Gann said the last thing they do is usually the most impactful.

“The last thing we do is give them a gift card for a restaurant, or either a frozen casserole to take home,” she said. “That’s usually when they’ll cry, because they’re so overwhelmed. And I’ll cry with them because I remember that feeling, and not having anyone to share it with.”

With The Refuge up and running, Gann said she and a group of like-minded others at Northstar turned their attention to older foster children, for whom placement in a home is often a challenge.

“We started a mentoring program called ‘Impact’ for kids 14 to 18,” she said. “They don’t always get a home, so we wanted to minister to them through mentors. That way even if they don’t get adopted at least they’ll have a relationship with someone that doesn’t give up on them and will guide them to have a purpose.”

Thanks to two highly skilled social workers in their congregation, Gann said “Impact” has 12 trained and background-checked mentors in place to guide older children in the foster system toward a better life.

“When these kids turn 18 they can still get some assistance from the government,” she said. “But statistically, if they don’t have an adult mentor advocating for them, the deck is stacked against them for drug addiction, unwanted pregnancy, incarceration, and being on the street. They just don’t have direction, and everyone needs direction.”

While Gann and her family aren’t currently fostering children in their home, she said their experience in foster parenting shifted their whole paradigm.

“My foster boys changed my life,” she said. “They taught me about the true sacrificial love of Jesus. They taught me that life is not about us and our little problems. If we hadn’t stepped out, I’m afraid I’d have just kept living my same little boring life and never seen the need that’s out there. It’s all around us.”