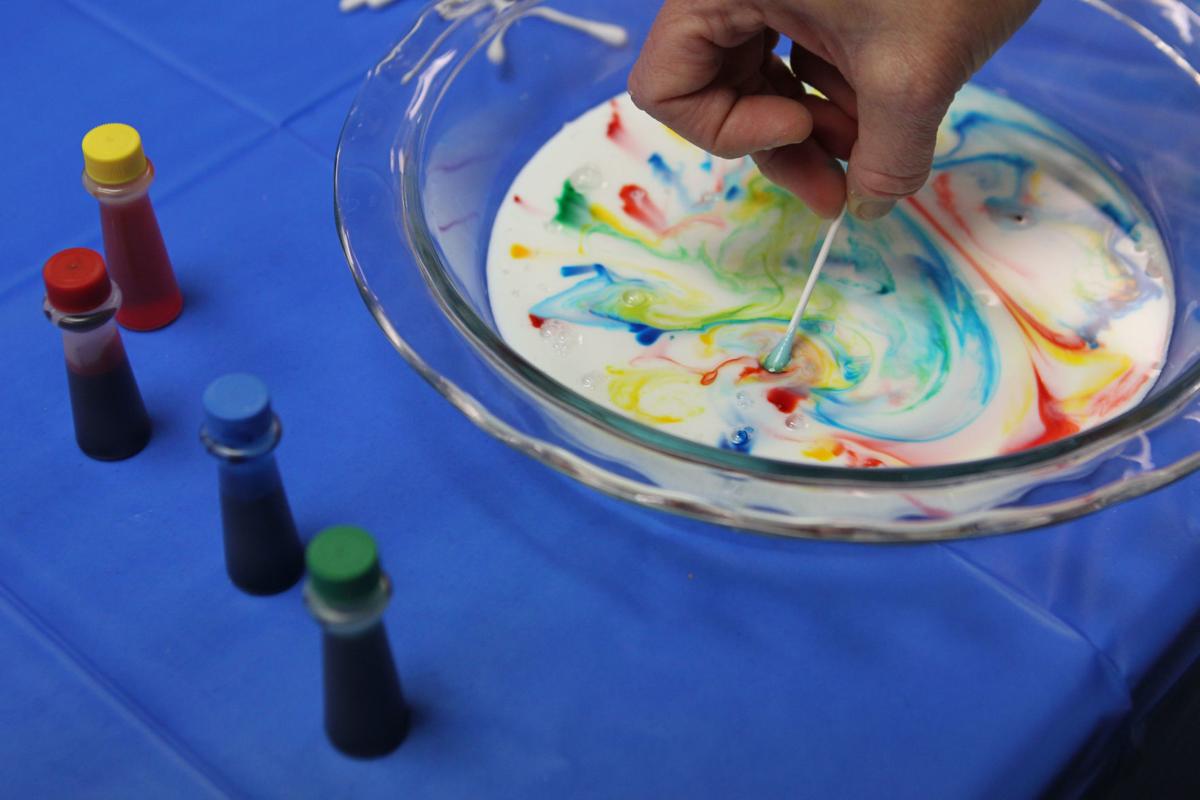 Jennifer Gillespie practices making ‘milk fireworks’ for a video she is going to use next for Hope Church’s virtual Vacation Bible School. 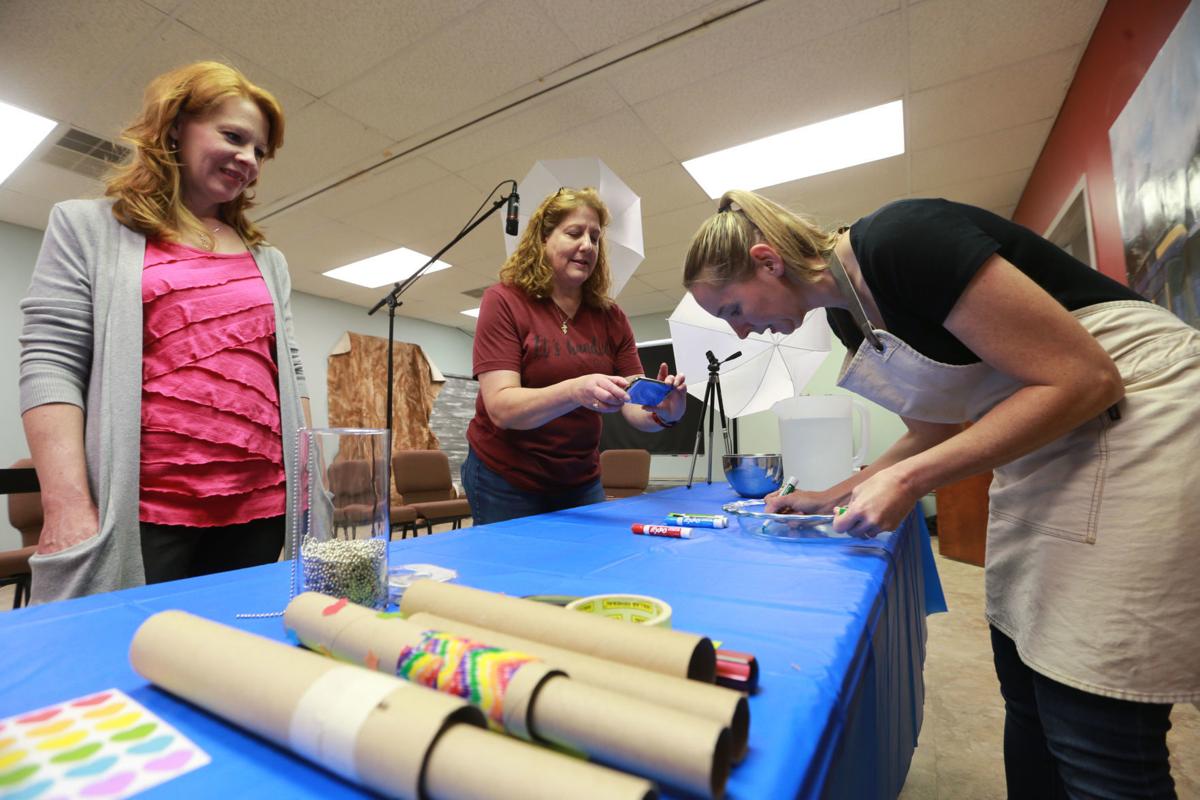 Deborah Winters, from left, Angie Adair and Jennifer Gillespie get ready to film a video that will be used for Hope Church’s virtual Vacation Bible School. 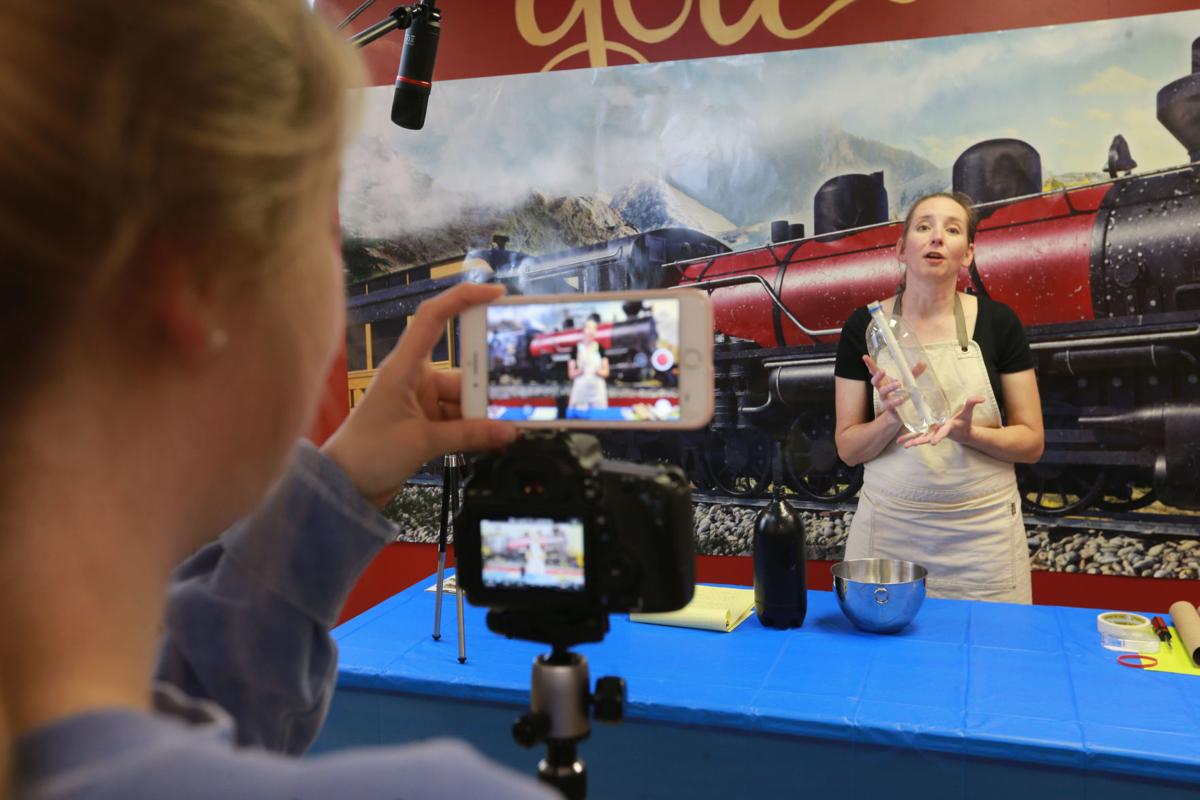 Jennifer Gillespie records a video that will be used for Hope Church’s virtual Vacation Bible School. Due to COVID-19, the church has turned to the internet for VBS this summer.

Jennifer Gillespie practices making ‘milk fireworks’ for a video she is going to use next for Hope Church’s virtual Vacation Bible School.

Deborah Winters, from left, Angie Adair and Jennifer Gillespie get ready to film a video that will be used for Hope Church’s virtual Vacation Bible School.

Jennifer Gillespie records a video that will be used for Hope Church’s virtual Vacation Bible School. Due to COVID-19, the church has turned to the internet for VBS this summer.

TUPELO • Vacation Bible School is a potential COVID-19 storm looking for a place to happen. The thought of crowds of young children huddling in circles for Bible classes, sharing snacks, making sticky crafts, and singing shoulder-to-shoulder led many churches to cancel this longtime summer staple.

But Brittany O’Rourke, children’s minister at Hope Church in Tupelo, decided to try something different: an online VBS. The 36-year-old O’Rourke said even though she’s the one who suggested it in a staff meeting, it wasn’t really her idea.

“It had to be the Holy Spirit,” she said. “Normally I contemplate everything I say, but before I could take it back, I said, ‘Why don’t we do it online?’ And then I thought, ‘What have I just said?’

O’Rourke has been the children’s minister at Hope for the last five years. She said VBS is the linchpin of Hope’s summer programming.

“It’s the most important event we do,” she said. “It’s our biggest opportunity to reach kids with the Gospel. It’s three hours a day for five days to just pour the love of Jesus on them. It’s just so effective.”

O’Rourke said making the switch from live to virtual VBS had forced her to learn an important lesson.

“I’m a planner,” she said. “I rely heavily on my schedule, but with COVID that all came unraveled. Obviously God has his own plans and he is lord of my plans. I had to scratch everything I had planned for this summer and trust that he had a better plan.”

O’Rourke said after the decision was made, she and others began recruiting volunteers and planning for the ambitious project.

“We started recruiting actors immediately,” she said. “We’ve been filming for three weeks now, and we’re almost finished. There will be 40 videos in all. We’ll release three videos a day starting in the second week of June.”

O’Rourke said the videos will include all the classic elements of a live VBS.

“We’ve built the sets just like we would if we were live,” she said. “We’ll have lessons, skits, music, a science experiment, missions, and even a snack video that shows how to make the snacks at home.”

Under normal circumstances, O’Rourke said Hope would have purchased a prepackaged kit with supplies included for elements like the science experiment, but COVID changed all that.

“The mom that did our science videos is Jennifer Gillespie,” she said. “She spent hours figuring out how families could make a rocket at home out of paper towel rolls and rubber bands, and she came and filmed it with her kids. She’s amazing.”

O’Rourke said a recent hire at Hope has been instrumental in pulling the project together.

“We just hired Joe Gilley, our worship pastor, this year,” she said. “He has become our videographer and he takes care of all the tech side. He has spent endless hours doing all this, and there’s just a level of excellence that he’s put into it.”

O’Rourke said producing a completely video-driven VBS had taught her a new appreciation of the difficulty of video production.

“To pull this off, everything has to be done well,” she said. “There’s the planning and prep, the rewriting, and then the time it takes to film: plugging in lights and moving cameras and building stage sets. So many things go into making it appealing.”

As the launch date for the finished project approaches, O’Rourke said she has learned lessons about both leading and following.

“I love seeing how I had a plan,” she said. “But God had a different plan, and he has provided all the people to help. I’ve had the support of our pastor and our leaders and the whole congregation. It’s been wonderful to see it all come together.”

O’Rourke said the whole process reminds her of the wisdom of an Old Testament proverb.

“I’m a planner,” she said. “But in one instant all my plans were turned upside down. It makes me think of Proverbs 16:9: “In their hearts humans plan their course, but the Lord establishes their steps.”