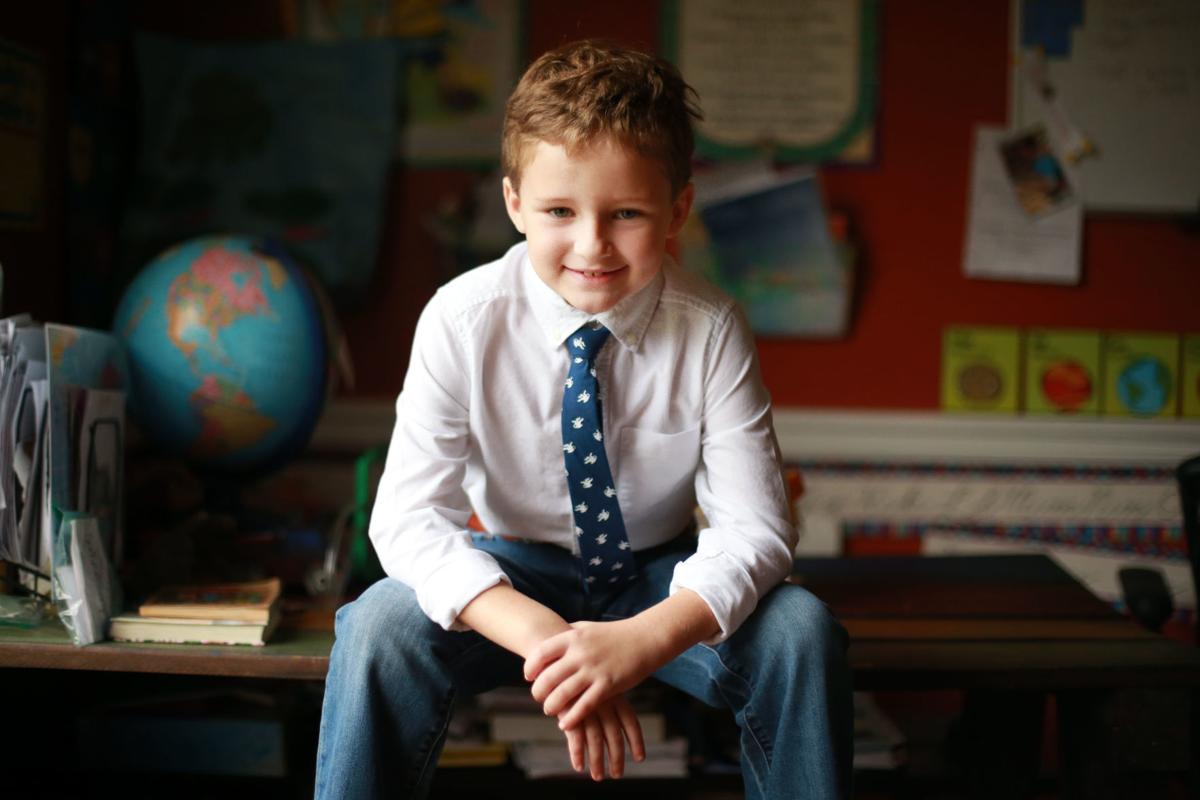 Aace White of Big Creek has been studying for months to memorize between 500 and 900 Bible verses for the National Bible Bee Competition being held in Kentucky later this month. 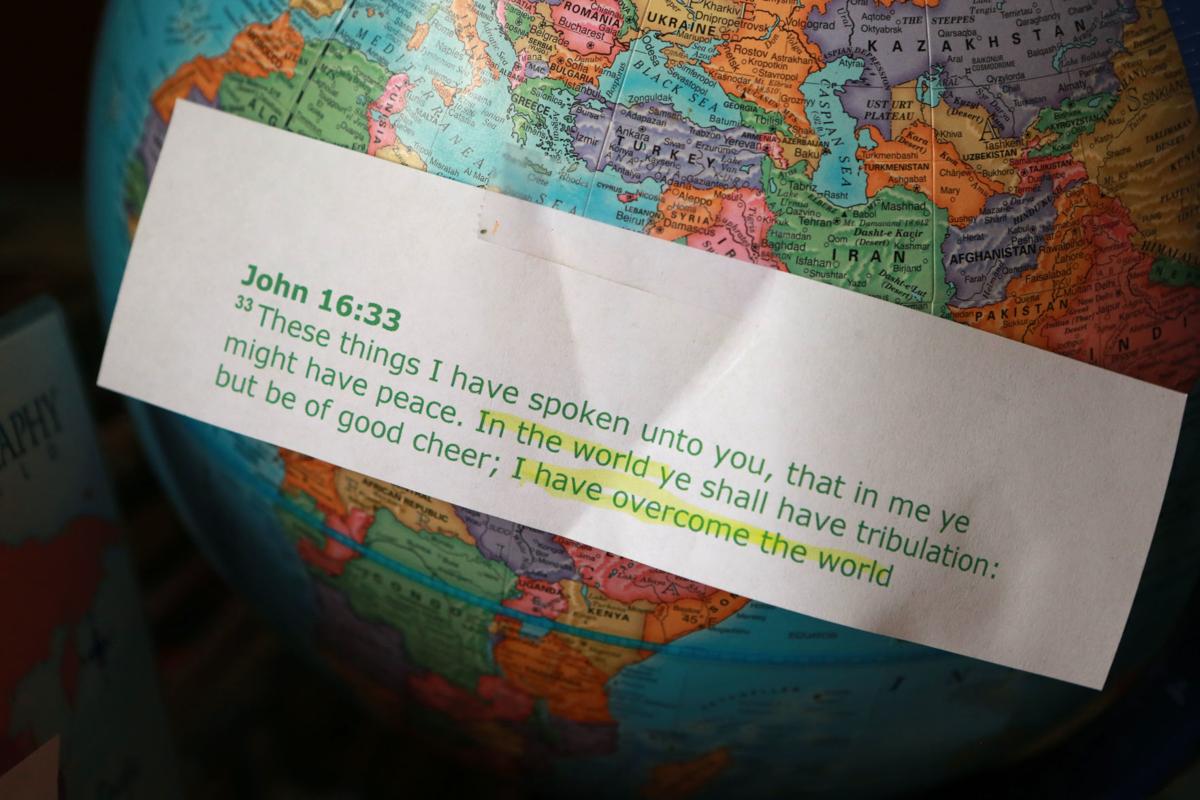 Aace has Bible verses and other important facts about the Bible posted all over his Big Creek home. 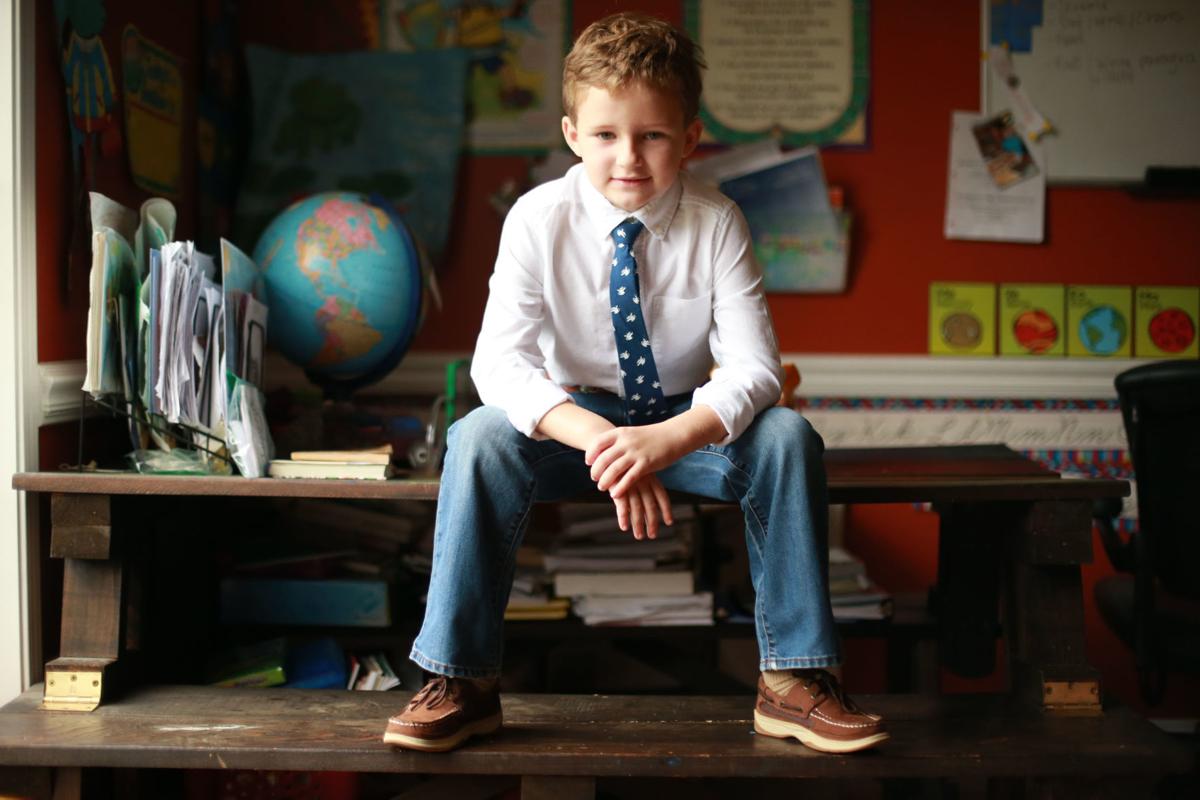 Aace White of Big Creek has been studying to memorize between 500 and 900 Bible verses for the National Bible Bee Competition being held in Kentucky.

Aace White of Big Creek has been studying for months to memorize between 500 and 900 Bible verses for the National Bible Bee Competition being held in Kentucky later this month.

Aace has Bible verses and other important facts about the Bible posted all over his Big Creek home.

Aace White of Big Creek has been studying to memorize between 500 and 900 Bible verses for the National Bible Bee Competition being held in Kentucky.

BIG CREEK • Seven-year-old Aacen “Aace” White of Big Creek lives in the country with his mom and dad, his three brothers, a few rabbits, ducks, and geese, one turkey, and a goose named Gus.

In just a few days, Aace and his family will have to put out some extra feed for the animals when they leave for Covington, Kentucky, where Aace will compete in the National Bible Bee Competition on Nov. 18-21.

Aace will be one of the youngest of the 320 contestants from around the country who will stand under the lights and attempt to quote their way to a total of more than $100,000 in prize money.

Begun in 2009, the Bible Bee’s stated mission is to “engage young people in the memorization and study of the Bible and provide opportunities to proclaim God’s word through local, national and broadcast venues.”

Every year, 72 of the top finishers in the national competition go on to vie for $270,000 in prizes in the nationally televised Bible Bee Game Show, hosted by Kirk Cameron.

Aace said he’s not nervous about the competition, and he’s excited for his family to have some fun while they’re on the trip.

“Were gonna go ice skating,” he said. “And we’re hoping to go to the Cincinnati zoo.”

Aace has been working since August to learn the 500-plus Bible verses he’ll have to memorize, along with Greek words, cross-references, and the entire book of First Peter. He said the verses are piling up in his brain.

“Every day when we learn new verses, it’s like that part’s in my head,” he said. “I just think on it and it gets stuck in my head.”

Among the more challenging texts on his list is Nehemiah 8:4-6. Dressed in a white button-down shirt and pint-sized blue tie, Aace stands erect and recites the passage, dense with hard-to-pronounce Hebrew names, perfectly:

“And Ezra the scribe stood upon a pulpit of wood, which they had made for the purpose; and beside him stood Mattithiah, and Shema, and Anaiah, and Urijah, and Hilkiah, and Maaseiah, on his right hand; and on his left hand, Pedaiah, and Mishael, and Malchiah, and Hashum, and Hashbadana, Zechariah, and Meshullam. And Ezra opened the book in the sight of the people; for he was above all the people, and when he opened it, all the people stood up. And Ezra blessed the Lord, the great God. And all the people answered, Amen, Amen, lifting up their hands: and they bowed their heads and worshipped the Lord with their faces to the ground.”

Though he won’t be able to use it in the competition, Aace said his mother showed him a helpful hack for learning all those names.

“Momma wrote the first initial of their names on my fingers,” he said.

Aace is the third of Matthew and Whitney White’s four sons. The others are Aaron, 10; Aaden, 9; and Asher, 1. Matthew is the pastor at New Hope Baptist Church in Webster County and writes for the American Family Association Journal, based in Tupelo. Whitney is a children’s book author, homeschooling mother, and now the tutor for an aspiring Bible Bee contestant.

She said preparing for the event has been daunting, not just for Aacen, but for her and her husband as well.

“We started back in August,” she said. “It’s been tough. All three of the older boys worked really hard on the eight-week summer study program, but Aace was the only one who wanted to continue.”

White said her family was surprised to learn that Aace had qualified for the national competition.

“He had to take a comprehensive test over everything they’d done in summer study,” she said. “We weren’t thinking he’d even qualify, so we’re keeping our expectations realistic. Next year we’ll start earlier. We’re just learning.”

White said she doesn’t expect Aace to be nervous at the competition, given the amount of time he already spends in front of groups of people.

“He’s very bold,” she said. “He spoke last Wednesday at a church. He’s doing staff devotions next week at AFA and then he’s speaking at the Calhoun City Chamber of Commerce.”

“I have a speech right here,” he said, patting a stack of neatly printed pages.

With a gentle prompt from his mom, he quoted the line he plans to end his speeches with, from pastor Adrian Rogers:

“The Bible is like a pool shallow enough that a little child can come and get a drink of water without fear of drowning, yet so deep the scholars can swim in it and never touch the bottom.”