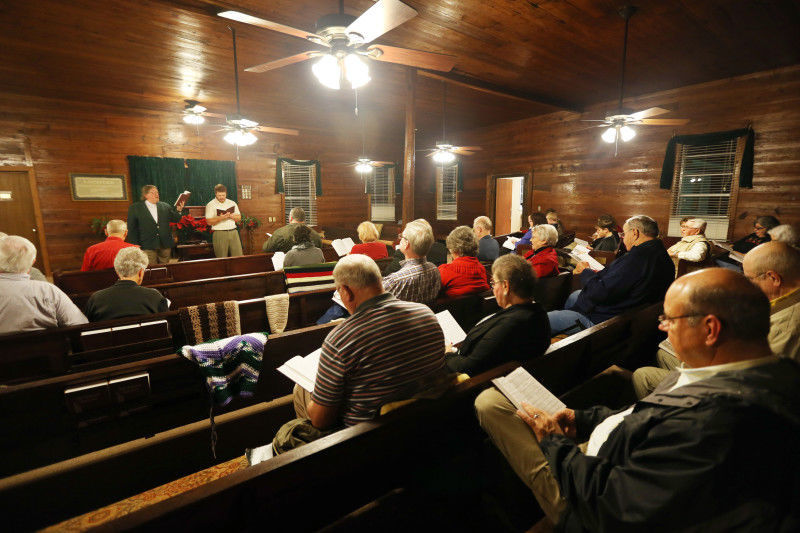 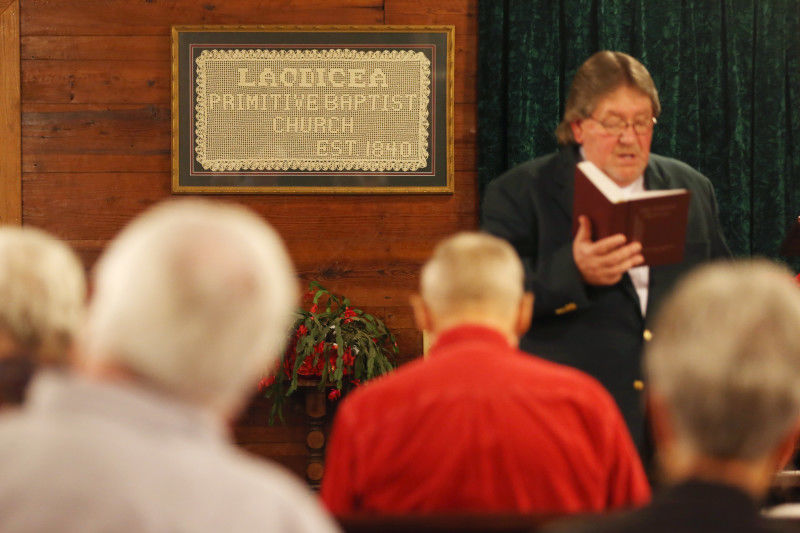 Buy at photos.djournal.com The Rev. Steve Weaver and Reed Luther lead the congregation in song Wednesday evening at the Laodicea Primitive Baptist Church in Lafayette Springs. The church is celebrating its 175th anniversary in the original building. 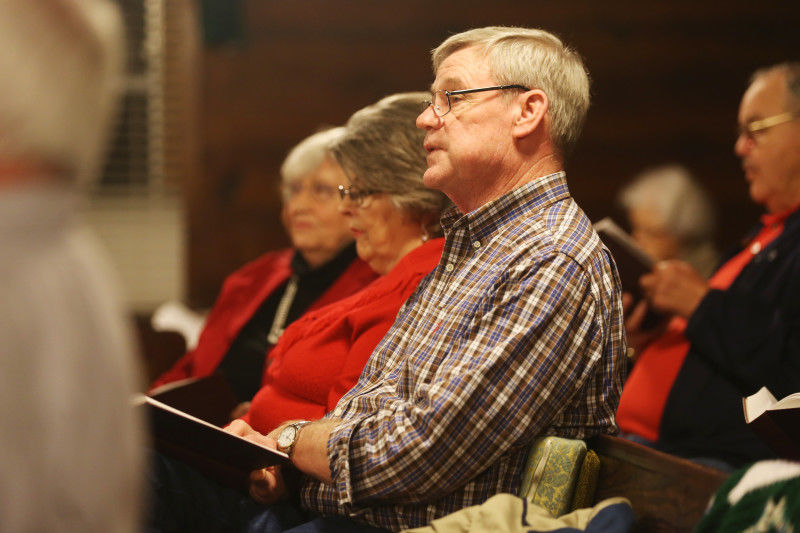 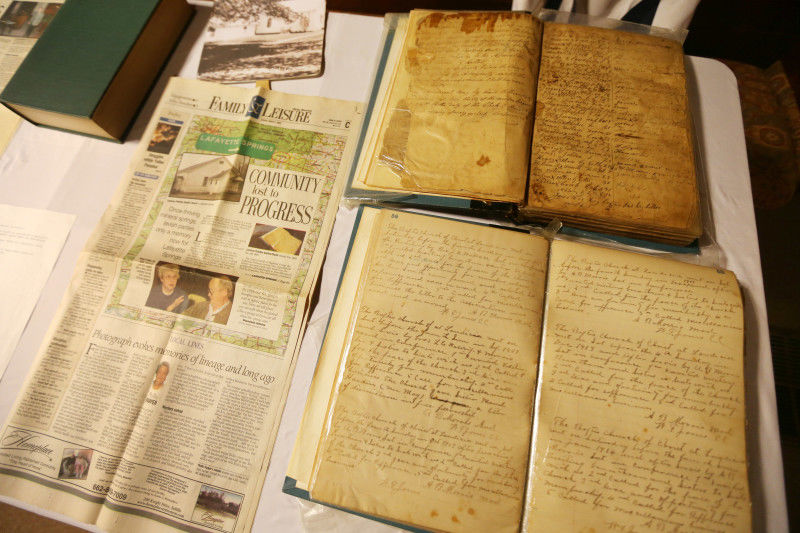 Buy at photos.djournal.com The Rev. Steve Weaver leads the congregation in song Wednesday evening at the Laodicea Primitive Baptist Church in Lafayette Springs. Church member Geneva Embry crocheted the doily on the wall behind Weaver. 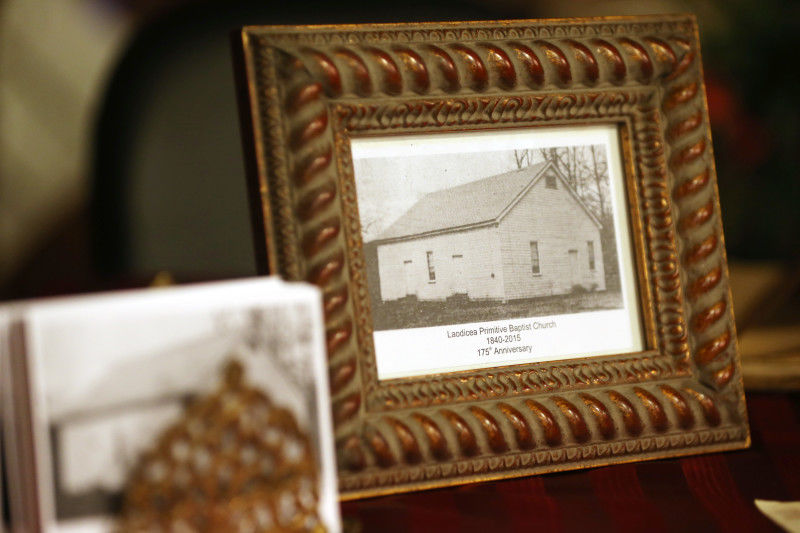 Buy at photos.djournal.com The Rev. Steve Weaver and Reed Luther lead the congregation in song Wednesday evening at the Laodicea Primitive Baptist Church in Lafayette Springs. The church is celebrating its 175th anniversary in the original building.

Buy at photos.djournal.com The Rev. Steve Weaver leads the congregation in song Wednesday evening at the Laodicea Primitive Baptist Church in Lafayette Springs. Church member Geneva Embry crocheted the doily on the wall behind Weaver.

LAFAYETTE SPRINGS – They don’t make them like they used to – churches, that is – but the old way has served Laodicea Primitive Baptist Church well for the past 175 years. It celebrated its latest anniversary last Saturday and looks forward to many more.

The church is located in Lafayette Springs, and though its original congregation numbered right at 100 members, attendance now sits around 40.

“We don’t keep up with numbers like a lot of churches do. Between 40 and 70 members is pretty common for country churches,” said the Rev. Steve Weaver. “Lafayette Springs was originally planned as a tourist destination. There used to be natural springs out here, but they dried up over time.”

The present building was constructed in 1881, and still uses most of its original furnishings. It isn’t much: a few wooden pews and a simple podium raised up on an eight-inch platform. There is no choir loft or pipe organ, no sound system or instruments. But to say the church lacks these things – that it needs them to be complete – wouldn’t quite be true.

“Our services are simple,” Weaver said. “Our music is congregational singing only. Not many of us sing well, but when we blend together, we’re all right. We feel like it’s pretty close to the same way the apostles did it.”

Weaver said ministering to such a small flock has its advantages. For one, the Sunday service structure allows an hour for prayer requests. Everyone gets heard, Weaver said, during service.

“It’s very personal. If one of mine misses, I know it. I truly believe scripture teaches that a preacher is called by God to shepherd his flock, and that God will hold us accountable for that,” Weaver said. “I know every problem they have. It’s humbling.”

Members also offer their input on church decisions. Everything is voted on and must be agreed on unanimously.

“If the vote comes out 98 to 2, we ask those other two to concede,” Weaver said. “They usually do, but not always.”

One of the few changes to the church is the plaque outside honoring former pastor the Rev. E.D. McCutcheon, who preached at Laodicea B.C. from 1949 to 2002. It bears scripture from Jeremiah 6:16, which reads, “Stand ye in the ways, and see, and ask for the old paths, where is the good way, and walk therein, and ye shall find rest for your souls.”

“He left such a legacy,” Weaver said. “So many preachers came up under him.”

Weaver is no exception. He came to ministry in 1992, and served as an elder at Laodicea B.C. for four years before becoming pastor. He was intimidated by the idea of preaching, and he’d kept his burden for the pulpit to himself for the most part.

“When I met with the deacons I told them, ‘I’m not McCutcheon.’ God gives everyone different gifts. I’m a very cut and dry person. I tend to lay it all out plain as I can, and if there’s a disagreement, we can sit down and talk about it,” he said. “They were good to me and I felt right at home.”

“They take care of the community, too,” Weaver said. “Most people don’t want sound doctrine. They want feel-good doctrine. I can honestly say we try to do what the Lord has asked us to do. We understand that the things of this world, and what’s going on in it, have nothing to do with the kingdom of God.”

According to Weaver, Primitive Baptists were originally called “Regular” Baptists. When a sect wanted to expand mission work to foreign countries, they changed some of the doctrine to make it more palatable, and these changes were what split the church.

“We’re the original mold of Baptists. They called us ‘hard shells’ at first,” Weaver said. “We’re about the ‘shalls’ in scripture. If God allowed 70 scholars to come together, compile the cannon of the King James Bible and agree on the result, the spirit was in it. The Bible says not to add to or take from the scriptures. God himself says, ‘I am God and I change not.’”