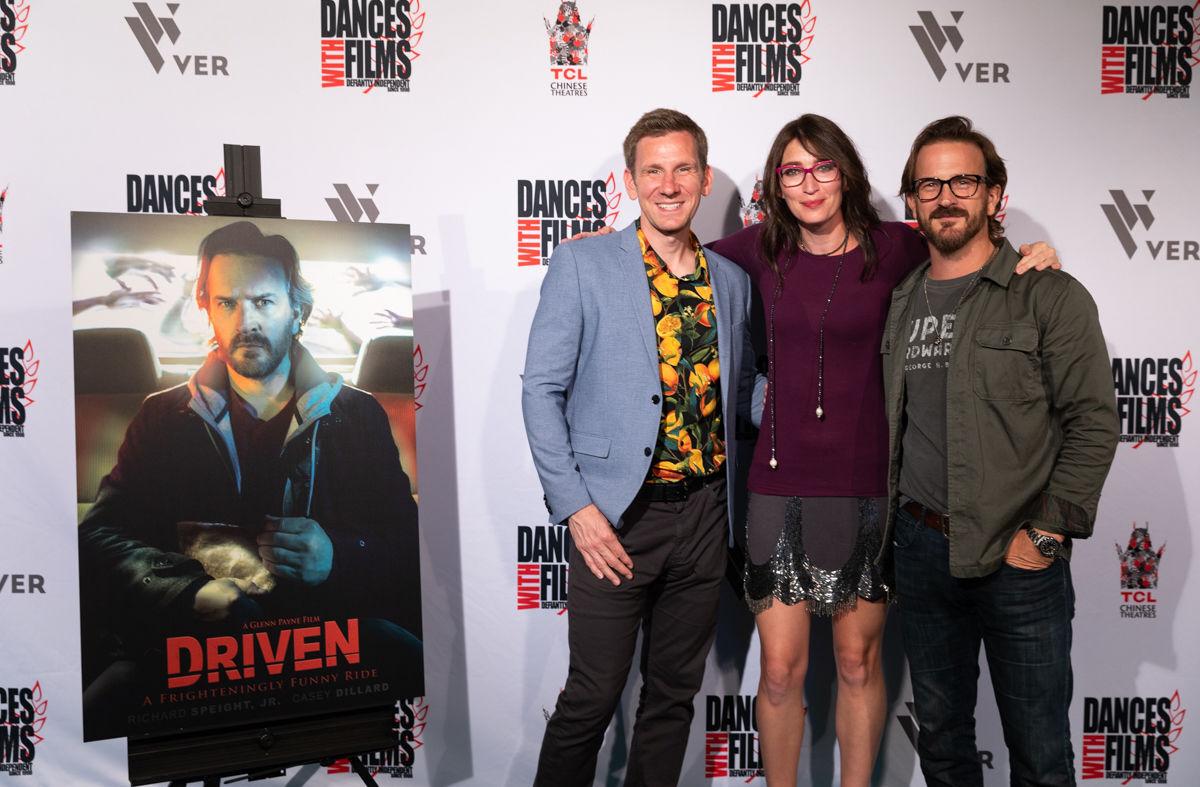 Standing next to “Driven” poster, Glenn Payne, from left, Casey Dillard and Richard Speight Jr. pause for photos at the Dances With Films festival June 15, 2019, in Los Angeles. 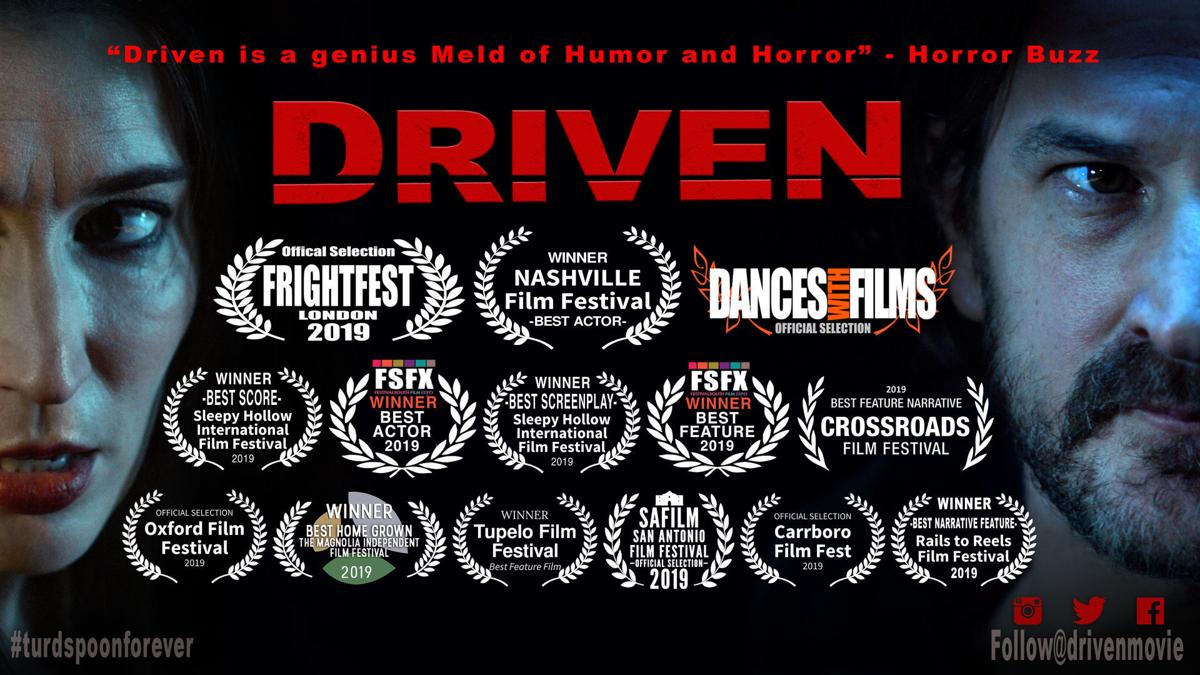 An image with Dillard and Speight along with the recognitions and premieres "Driven" achieved during its film festival run in 2019. 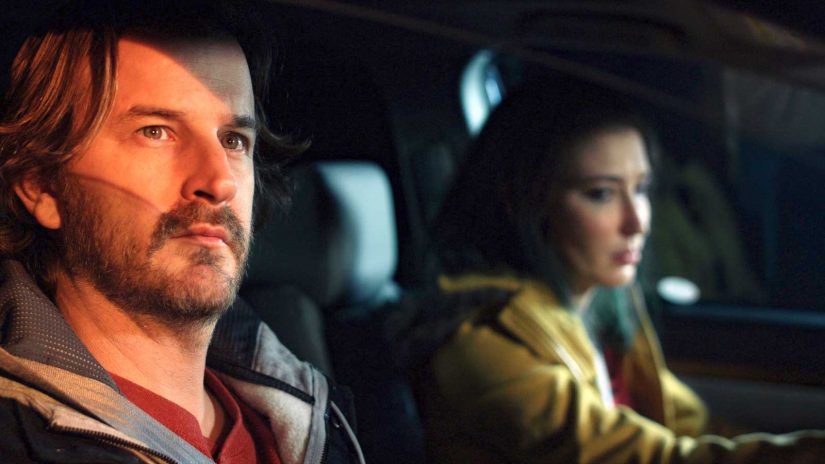 Roger, a mysterious passenger (Speight) rides next to cab driver Emerson (Dillard) in a scene from "Driven."

Standing next to “Driven” poster, Glenn Payne, from left, Casey Dillard and Richard Speight Jr. pause for photos at the Dances With Films festival June 15, 2019, in Los Angeles.

An image with Dillard and Speight along with the recognitions and premieres "Driven" achieved during its film festival run in 2019.

Roger, a mysterious passenger (Speight) rides next to cab driver Emerson (Dillard) in a scene from "Driven."

TUPELO • The independent movie “Driven” has been on a long drive the past year and a half.

The 90-minute feature film, which was shot in Tupelo, has been shown at film festivals from Mississippi to Los Angeles and London. Along the way, “Driven” has picked up a carload of accolades and favorable reviews from film critics.

Now, the movie is parked for all to see.

“Driven” – a comedy/horror featuring a cab driver and her mysterious passenger – has been released on DVD and digital downloads. Glenn Payne, who juggled the roles of co-producer, director, editor and actor in the film, is glad “Driven” is off the road and available for viewing.

“We did the film festival circuit, which took quite a long time,” said the Blue Springs resident. “But the movie traveled all around the U.S. and to the U.K. We had a really cool journey for it. It kind of pushed back the release of it.”

Payne co-produced “Driven” with Tupelo’s Casey Dillard, a longtime film collaborator with Payne who also wrote the screenplay and played the cab driver.

According to the film synopsis, Emerson Graham’s (Dillard) nights as a driver are filled with annoyances and inconveniences, but never attacks and disappearances. After picking up a stranger (Richard Speight Jr.,), her evening goes from working a job to performing a quest as she must race against the clock to defeat a force of evil.

Speight, whose screen credits include roles in “Supernatural” and “Band of Brothers,” was part of a cast and crew that included many people from Tupelo and north Mississippi. Some of the locations where shooting took place include the Link Centre, Dairy Cream, Tupelo Aquatic Center, 1 Hour Martinizing Dry Cleaner and Vanelli’s.

“There’s so much talent in north Mississippi and the surround area,” Payne said. “I always love to give people a chance, and we’re blessed to use them whenever we have any kind of project. It’s a good mix of new faces on a film as well as people you’ve worked with that you’ve developed a good chemistry.”

“Driven” made its world premiere Feb. 9, 2019 at the Oxford Film Festival. That was the beginning of film festival appearances for Payne, Dillard and Speight, and the premieres and recognitions followed:

“Driven” is available on iTunes, Amazon, Google Play, Vudu, FandangoNow and Xbox. The DVD can be ordered from Amazon.

Payne said the “Driven” crew is grateful for the awards. “It’s definitely not why you do it, but it’s a good feeling when they do come through, especially for various parts of the team,” he said. “It’s nice to see it spread around the people who worked so hard on it.”

Payne was impressed with the FrightFest, the biggest genre festival in the United Kingdom.

“They have such passionate fans there,” he said. “It was different from any event I’ve ever been to as far as how many people came to it as an annual activity. You could feel how much they enjoyed being there and watching the movies.”

In addition to the honors, “Driven” also attracted the attention of Uncork’d Entertainment, a company that signed on as the film’s distributor.

“We got a lot of exposure during the festival run, which helps catch the eye of different distributors,” Payne said.

• Information on "Driven" can be found at driventhefilm.com

• The "Driven" DVD can be ordered from Amazon.