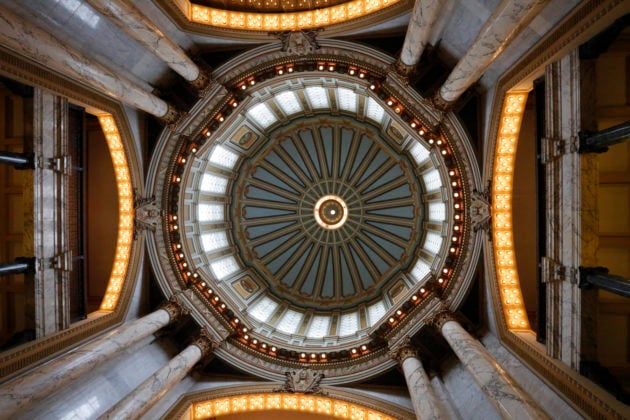 The Beaux Arts style of architecture of the Mississippi Capitol, highlighted by the use of various types of glass throughout and the use of 750 light fixtures, surrounding the rotunda, are factors that helped earn the designation of a national historic landmark, Thursday, May 4, 2017, in Jackson, Miss. An official from the National Park Service made the presentation in the rotunda of the building that opened in 1903. (AP Photo/Rogelio V. Solis)

Mississippi is enacting a wide range of laws based on bills passed during this year’s legislative session, including some that separately regulate wine, school buses and scooters.

Mississippi residents who visit wineries in other states will be able to have bottles of wine shipped back home, in a roundabout way. House Bill 1088 will become law Jan. 1. It says a person may purchase wine from a winery and have it shipped to a package retail store in Mississippi, and that package store will ensure that the Mississippi Department of Revenue collects all taxes, fees and surcharges that the state is owed — expenses that will, presumably, come from the wallet of the consumer and not from the retailer acting as the middle man.

School bus drivers may now go as fast as 65 mph on interstate highways, up from a previous limit of 50 mph. That change is in House Bill 1176, which became law July 1.

Gautier and Walnut Grove received permission to let people drive golf carts of other low-speed vehicles on city streets, through Senate Bill 3033 and House Bill 2150. Another measure, House Bill 1468, clarifies the types of regulations that Pass Christian may set for people puttering along in such vehicles.

The bills dealing with scooters and golf carts are “local and private” legislation, which deal with issues in specific cities or counties.

In a local and private measure unrelated to golf carts or scooters, House Bill 1586 let Coahoma County spend local money for specific projects — up to $2 million for costs related to a new justice complex and a new fire station, and up to $2 million toward construction of a Jonestown highway bypass.

Other local and private bills allow several cities to either extend existing taxes or set new ones. The taxes on restaurant meals and hotel and motel stays typically pay for parks and recreation programs.

One new statewide law prohibits convicted sex offenders from having further contact with their victims. Senate Bill 2009 became law July 1. It says that a convicted sex offender may not “threaten, visit, assault, molest, abuse, injure or otherwise interfere with the victim,” including by following the person to work, school or home or by contacting the victim by phone, written communication or electronic means. Violation is punishable by five to 10 years in prison and a fine of up to $5,000.

A judge could grant exception for contact at the request of the victim or the victim’s parent, guardian or conservator “if the court determines that reasonable grounds for the victim to fear any future contact with the defendant no longer exist.”

Republican Sen. Brice Wiggins of Pascagoula is chairman of the Judiciary B Committee, which was the first to examine the bill. Wiggins is a former prosecutor, and he said it has been standard practice in some court districts to have sentencing orders that prohibit sex offenders from having further contact with victims. But, he said those could differ “from place to place and judge to judge.”

Wiggins said some convicted sex offenders have tried, while inside prison, to contact their victims.

“It puts these criminals who have been convicted on notice that if they violate that, it creates another crime that they’ve committed,” Wiggins said Friday.

Another new law requires the Mississippi Department of Child Protection Services to form teams to assess and respond to children who are victims of human trafficking and commercial sexual exploitation. This requirement is in House Bill 1559, which became law July 8.