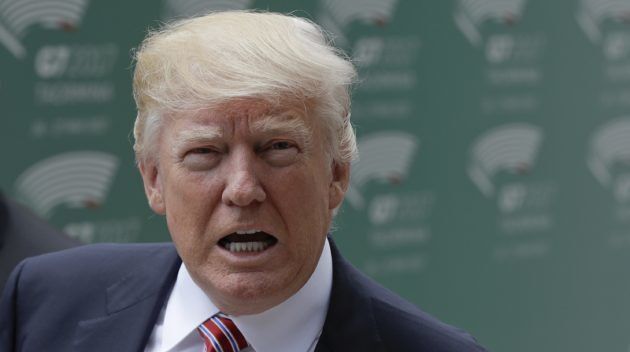 Since 2016, previous studies from analysts at the Media Research Center revealed that the coverage of Trump on major broadcast networks was 91% negative.

A new study released this week found that the coverage is now 95% negative.

The analysis of all evening news coverage of President Donald Trump and former Vice President Joe Biden in June and July found these networks chose to aim most of their attention and nearly all of their negative coverage on Trump, so Biden escaped any scrutiny of his policy positions, past job performance or character.

From June 1 through July 31, the ABC, CBS and NBC evening newscasts focused 512 minutes of airtime on the President, or nine times more than the 58 minutes allotted to Biden. (This excludes coverage of the Trump administration in general when not associated with the President himself.) This is an even wider gap than the spring, when Trump received seven times more coverage than Biden (523 minutes vs. 75 minutes).

The extra airtime devoted to Trump consisted almost entirely of anchors and reporters criticizing the President. During these two months, our analysts documented 668 evaluative statements about the President, 95 percent of which (634) were negative, vs. a mere five percent (34) that were positive. The study found very few evaluative statements about Joe Biden — just a dozen, two-thirds of which (67%) were positive.

Based on the evaluation, viewers heard 150 times more negative comments about Trump than Biden.

“I’ve been studying the news media and elections for more than 35 years. Trust me — there’s never been anything like it,” said Rich Noyes, research director for the conservative press watchdog.

The study revealed that ABC, CBS and NBC aired nine times as much coverage of Mr. Trump than Democratic presidential nominee Joseph R. Biden. The coverage of the president, the research found, was 95% negative. Meanwhile, the networks appear to be shielding Mr. Biden.

“Biden escaped any scrutiny of his left-wing policy positions, past job performance or character,” the study said.

“From June 1 through July 31, the ABC, CBS and NBC evening newscasts focused 512 minutes of airtime on the President, or nine times more than the 58 minutes allotted to Biden,” it continued.

“The extra airtime devoted to Trump consisted almost entirely of anchors and reporters criticizing the President. During these two months, our analysts documented 668 evaluative statements about the President, 95% of which (634) were negative, vs. a mere 5% (34) that were positive.”

In contrast, 67% of the evaluative statements about Mr. Biden are positive.

“Do the math, and viewers heard 150 times more negative comments about Trump than Biden. That’s not news reporting — that’s a negative advertising campaign in action,” the study said.

Content is king, as coined by the late great media mogul Sumner Redstone.

In today’s digital, search-optimized world, tapping into the right audience using the right tools at the right time is paramount! Creative content is truly an art form that requires audience awareness.

To reach your key audiences, you must consider content development, research, editing and analytics. All are vital in upping your content game.

Good news: there are myriad content research tools to tune into your niche. According to Search Engine Journal, here are the Top 5 tools:

Results can be sorted according to their reach in social networks, such as Facebook, Twitter, and Pinterest. This will allow you to scrape ideas that capture your target audience’s interest. You can also play with the filters found on the left to further refine your search.

For example, you can look specifically for “how-to” posts, narrow your search down to a specific country, exclude a certain domain, and more.

2. Ubersuggest – While intended as a tool for keyword research, Ubersuggest can also help you find content ideas that will get your audience’s attention. In some cases, Ubersuggest results include keyword ideas that can be used as content titles right off the bat.

These are usually “long-tail” keywords that include three or more terms.

3. LeadFWD – Leadfwd is a website where you can turn an unknown visitor into a potential lead. Sounds so good to your ears, right? It does!

Who doesn’t want a lead?

This is what digital marketing agencies crave all the time. Lead is the most important thing for any digital marketing company. The name might suggest that it is not a tool that helps your content creation, then you can’t be more wrong.

Additionally, you can convert them into leads as well. With the use of Artificial Intelligence (AI), the tool can scan your website in real-time to deliver dozens of insights.

For example, the company sector, contact info, key personnel, social footprint and many more are very much needed to contact the prospect.

Yes, it can be hard to learn about the new tool, but the user interface of this tool is very easy to work with for any new user.

4. Awario – Awario lets you monitor and listen to people’s conversations on social media. It is a great tool to have at your disposal for your business development.

Using this social listening tool, you can spot and correct the mistakes you’re making with your content – if any.

Yes, there might be odd and irrelevant conversations about your website, but hey, that’s what you get with the internet sometimes. Just ignore it and you will be fine using this tool.

Some may find it too gimmicky and less functional than the previous ones, but since it’s completely free, it’s definitely worth checking out.

Besides, it’s more than able to produce interesting and unique content!

Sumner Redstone, the icon who turned a family movie theater company into a global media empire spanning TV, movies, radio and publishing, and who coined the infamous phrase “content is king,” died recently at age 97.

Redstone founded the family company, National Amusements Inc., and built it into worldwide leader in the entertainment. He created a massive media empire through visionary investing, a bold dash of ruthlessness mixed with opportunistic litigation.

The media business he amassed, now part of ViacomCBS, delivered blockbusters to our living rooms and the big screen – from CBS hit shows such as “The Big Bang Theory” and irreverent cable programs on MTV and Comedy Central to film hits from the Paramount Pictures studio such as “Titanic” and “Top Gun.”

He pioneered the development of theaters with more than one screen and even trademarked the term “multiplex” for the concept, now commonplace.

Redstone was part of a shrinking posse of media moguls like Rupert Murdoch and John Malone, who shaped the media landscape through grit, determination and moxie.

He was also a health nut who shunned sugar and swore by antioxidants. In 2012, he told the Wall Street Journal he was working on a new book—later shelved – called “How to Live Forever,” in which he planned to share his secrets to good health.

“The main thing is that to have a good life, you have to love your work,” he told the Journal.

Redstone loved his work, creating exciting experiences for audiences worldwide. He was the content king, before content was cool!

BILL CRAWFORD — Reform and expand Medicaid to save lives