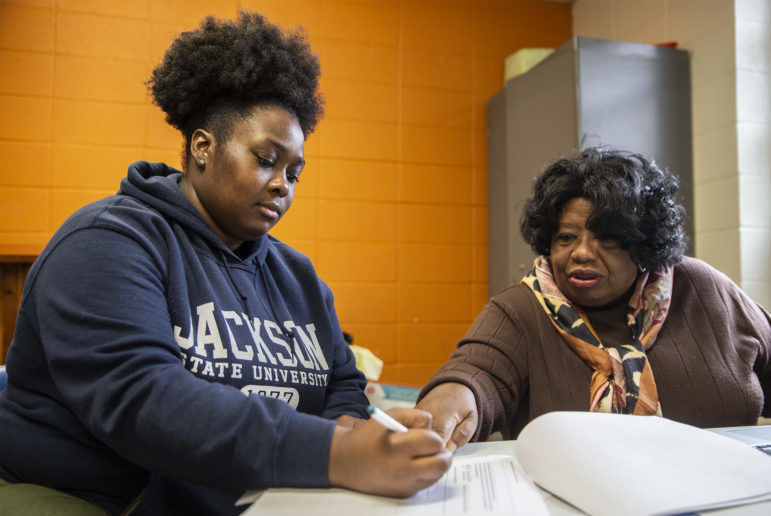 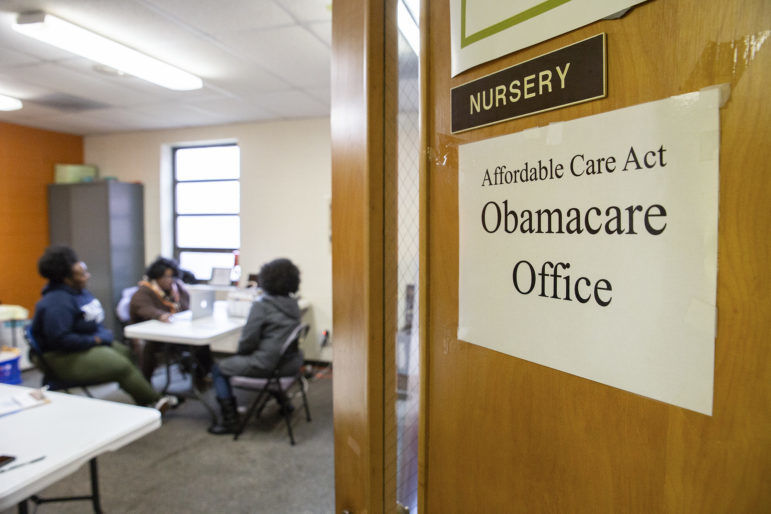 In June 2017, President Donald Trump promised voters he would “very, very quickly” repeal Obamacare. Two-and-a-half years later, the law remains largely intact, but the Trump administration has successfully chipped away at many of its tenets, from ending the requirement that all Americans have coverage and allowing new short-term plans to cutting funding for the navigators who help consumers sign up for insurance.

This has left many consumers confused about just what of the law remains, according to navigators like Talley, who works under a federally funded grant that helps people sign up for insurance through the health care marketplace.

“A lot of people thought that when they (politicians) were trying to kill it, and the insurance penalty canceled – they thought that ended Obamacare,” Talley said, shaking her head. As far as the rule changes that allow short-term insurance plans and general confusion about enrollment, she says folks who are enrolling for the first time often can’t differentiate between official ACA marketplace plans, private insurers piggy-backing off of the federal open enrollment period, and newly allowed short-term plans.

“They don’t know to ask questions about deductibles and premiums,” she said, referring to yearly out-of-pocket deductible limits and monthly premium payments. “Some deductibles are so high, the insurance is never going to kick-in – some are short-term plans, and some are just shams.”

But these changes to the Affordable Care Act haven’t affected enrollment in Mississippi so far. Numbers are up this year and last year Mississippi was one of only five states to see enrollment gains over 2017. As of the first week of December, 37,576 had enrolled, which slightly edges out the 35,445 enrollees from the same time period last year. Mississippi Insurance Department Commissioner Mike Chaney said the federal Center for Medicare and Medicaid Services numbers often lag and put actual enrollment in Mississippi at 81,000 as of last week.

“CMS is always behind. It’s been that way for years,” Chaney said. “The main thing is that enrollments (through the federal exchange) are probably going to be higher this year than last year, and the reason is you can buy an individual policy on the exchange easier than you can through (private insurers) Blue Cross and United. The exchange is easier to use.”

Getting to the exchange, and getting navigators’ help to enroll may be a different story.

Type “Obamacare plan Mississippi” or “Affordable Care Act Mississippi” into an internet search bar and ads to sites promising “Obamacare coverage for $50/month” fill the page. But many of the plans quoted on these sites don’t meet the ACA’s comprehensive coverage requirements and consumers won’t get tax credits to help pay for the coverage.

Last year, the Trump Administration loosened restrictions on what are known as short-term plans, increasing the length of time that they can cover consumers from three to 12 months. Advocates for the ACA had long opposed this change, arguing that these plans, which are usually cheaper than plans under the ACA and provide much less comprehensive coverage with higher deductibles, could mislead consumers, who might not realize their limitations.

The new short-term plans concern Roy Mitchell, executive director for Mississippi Health Advocacy Program, a public health research organization that advocates for health resources for undeserved Mississippians, who says many of the plans don’t cover much and the payment structure can stick consumers with high bills from treatment unpaid by insurance, known as “balance billing.”

“Whether or not they understood the limitations of the plan they are purchasing, enrollees could be left with tens of thousands of dollars in uncovered costs and providers may then be left with uncompensated care,” he said, pointing to the case of a Tupelo man who recently called MHAP seeking help with $100,000 in unpaid medical bills after his bare-bones insurance plan denied his throat cancer treatment claim, alleging it was a pre-existing condition despite his recent diagnosis and new symptoms.

Plans sold through the ACA marketplace have to cover pre-existing conditions, as well as meet other requirements to ensure that insurance plans actually kick-in when consumers need them most, like banning lifetime and yearly limits to coverage. Chaney, however, said concern over potential confusion is overblown.

“There are a few cases where the consumer may not understand what they’re buying, but the consumers in our state are very well informed,” Chaney said.

Mitchell points to the irony of the short-term plans role as a stop-gap, saying that consumers seeking these plans in times of transition, like losing work or parents’ coverage and early retirement, would likely qualify for a special ACA enrollment and a tax credit to reduce premium payments, too.

Health advocates also worry that the Trump administration’s most recent change to the ACA could hurt the marketplaces stability over time by siphoning off young and healthy people.

Mitchell adds that states have broad authority to regulate short-term plans, ranging from an explicit ban of short-term plans to limiting plan duration or requiring consumer protections in the short-term market. Data he collected from the insurance department show at least five carriers offering short-term plans with almost 1,500 enrollees in 2018. He has pressed the insurance department and officials to ensure consumers are protected when signing up for the plans, but at the end of the day, he’s worried not enough protections are in place and that consumers will be on the hook for it.

Whether adding these is a good or bad thing for Mississippians seems to depend on overall support for the ACA.

U.S. Sen. Cindy Hyde-Smith, who, along with fellow Republican Mississippi Sen. Roger Wicker, voted last year to uphold the Trump Administration’s expansion of short-term plans, has said the plans would increase competition in a state with limited options on the exchange.

This year, some Mississippians will have a second option for an insurer. Molina joined Ambetter on the health insurance exchange in 19 counties – including the most populous areas of the state, such as Jackson- and Memphis-metro countries and the Coast. So far though, the new insurer hasn’t attracted many consumers, and Ambetter generally remains the more affordable option with comparable benefits. Chaney said just 1,000 of the 81,000 people who’d enrolled had signed up with the new insurer, Molina.

“Ambetter’s done a very good job of improving networks and coverage for the consumer, and the consumer has more confidence in Ambetter,” Chaney said. “… You can tell the tide’s turned a little bit towards the Affordable Care Act.”

Navigators say both new and old consumers are favoring Ambetter, as well. For new customers who are simply looking for affordable safety-net coverage, Ambetter is still the cheapest option. For returning customers, like Barbara Davis, who had previously enrolled with Ambetter and liked the coverage, “If it’s not broken, don’t fix it,” she said one December afternoon after re-enrolling with navigator Talley.

Davis, 59, likes the perks Ambetter offers, too. If she logs exercise time with Ambetter, they send premium and co-pay reimbursements. Plus, the incentive helps keep her healthy, she added. She says the peace of mind goes a long way, knowing she’s a few years out from qualifying for Medicare and her custodian job does not provide benefits. She doesn’t need many medical services other than her annual exams and asthma medication, so the cheapest “silver plan” – lower monthly premiums, but higher deductibles – works well for her.

Talley, the navigator who helped David re-enroll, echoes her point about peace of mind and says everyone currently without insurance should at least try to enroll though the ACA. She reiterates to folks who reach out to her for help signing up, that most Mississippians will qualify for at least some federal tax credit subsidy to help cover monthly premiums. Last year, 92 percent of Mississippi marketplace enrollees received a tax credit toward their premium and paid an average of $42 a month out-of-pocket, according to CMS data. Marketplace prices this year have remained relatively stable.

“You never know what’s coming,” she said. “If they cut Obamacare, I wouldn’t have anything,”

Enrollment runs through Dec. 15. Find help from navigators here and access the marketplace at www.healthcare.gov.{span class=”print_trim”}