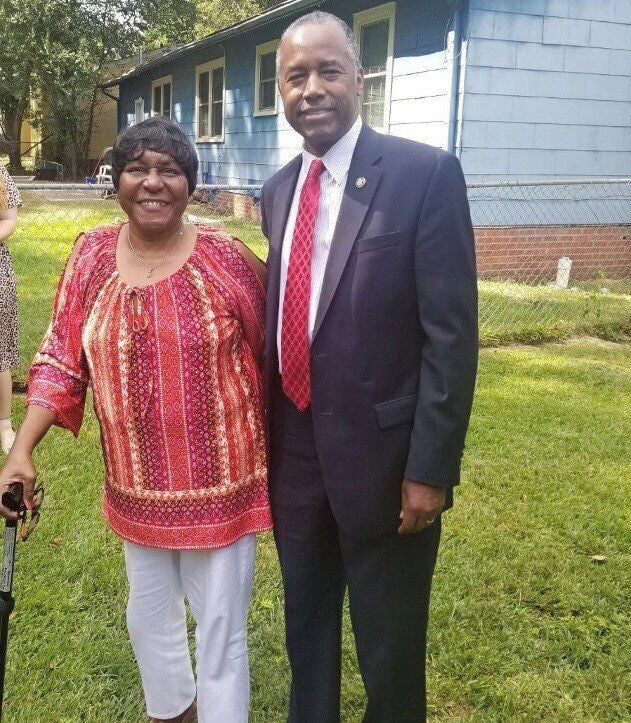 Editor’s note: This is the second in a series about lead exposure in Mississippi.

When Jessie Walls’ 5-year-old granddaughter Jordan frequently came over to play at her Jackson home, the flaky paint chips in and around the house were like moths to a flame.

Peeling lead paint is sweet to the taste, an unfortunate irony that makes young children’s hand-to-mouth habits even harder to break and more dangerous for lead paint exposure.

Last year, inspectors found lead paint inside and outside the 71-year-old grandmother’s Lake Hico-area home, which was built in 1963 and where she’s lived for more than 25 years. Door frames wore down over the years, exposing layers and layers of paint that easily flaked and peeled off from the friction of frequent use.

But Walls was among dozens in Jackson to receive a portion of a federal grant – the state’s only active lead remediation program – to help rid their homes of dangerous lead toxins. Today, her home is now safe from lead paint after workers removed the old paint from her house, meaning she can live comfortably without fearing Jordan will be exposed.

“I fear for her because she likes to go outdoors, and the paint be peeling off,” Walls said. “She’ll just go over to it, just peeling the paint. It was good that I got the paint and ceiling done… I’m just so thankful that they did that.”

In 2019, Housing and Urban Development Secretary Ben Carson and former Gov. Phil Bryant stood in Walls’ front yard for a press conference to award the $1.8 million HUD grant to the city of Jackson. Carson spoke about the risks of lead poisoning that he saw firsthand as a Johns Hopkins neurosurgeon and the payoff federal dollars receive in returned investment from lead reduction.

“This is one of the problems that we actually have the ability to solve in this country, and we’ve made tremendous progress already,” Carson said. “What we get back for every federal dollar is very substantial in terms of the health cost savings, in terms of school attendance, in terms of productivity when you join the workforce. It’s estimated that we get about $17 for every $1 we invest.”

In Hinds County, two-thirds of homes were built before lead paint was banned in 1978. In the capital city of Jackson, even more homes – about 70% – qualify as likely having leaded paint. That’s much higher than the average across the state, where less than half of homes meet the same criteria.

The federal grant that Walls received was designed to address the risk for low-income families who would otherwise struggle to afford lead remediation. In 2016, the city of Jackson was the first in Mississippi to acquire a federal grant from HUD to remediate lead paint in homes across the city. The grant targets older homes with lead paint, home to folks on a fixed income who live with or frequently watch young children. Walls, a retired food services manager from Jackson Public Schools, was a perfect candidate and still raves about the program.

Steered by the Jackson’s city planning office and facilitated by the local arm of the Baltimore-based Green and Healthy Homes Initiative, the $1.35 million in HUD funds was slotted for lead remediation and additional hazard repairs for 86 homes across the city.

Both Jackson and the state doubled down on HUD funds and both were awarded separate additional grants for lead paint remediation. The state health department was awarded $1.8 million in 2018 for 75 homes across the state in 2018, and Jackson obtained $1.8 million in additional funds for 78 more homes in 2019.

For all its progress to fight lead, Jackson stands alone in Mississippi in its progress to rid high-risk homes of lead paint, and they still have about $2 million left to fix more than 100 homes.

Yazoo City and Greenwood were both slated to enroll in the state’s 2018 grant by late last year. Due to what Greenwood officials called “too many undetermined factors and unanswered questions” and “honestly not enough affirmative information to clearly instruct the city’s team to follow,” the city ultimately declined the state-run HUD funds. Today, Yazoo City remains the only other city slated to receive the funds, but due to COVID-19 delays, the grant has yet to start repairing homes.

Though the city of Jackson has proven to be the only so-far successful lead paint remediation program in the state, it has had its own struggles to enroll qualifying families. Though early lead paint testing across the city showed half of homes in west Jackson showed lead in paint tests, enrollment hasn’t caught on – even pre-COVID. Now because of the pandemic, homes that were enrolled are at a standstill.

So far, 33 homes have had lead paint removed and 18 sit in the pipeline, leaving funds for 113 more homes.

The lead removal process can be arduous. A certified lead inspector scans a handheld X-ray gun over walls and doors, detecting lead buried beneath the walls and door jambs. Walls’ house only had lead in the door frames, underneath the carport and outside where the trim meets the yard, making the remediation less-invasive than some. She didn’t have to leave the house during the week-long construction, which replaced the leaded frames, beams and trim.

Other homes can require more invasive work, stripping leaded paint from the interior. All the remediation work done through the HUD grant requires strict protocol to limit lead dust from settling in other parts of the home, yard or neighborhood. Lead interventions require a specialized contractor license, and oftentimes federal grantors require even higher standards – there are only six lead-safe contractors in the metro area.

For Walls, the program has been a great success. Though she’s been home-bound since March due to the fears of contracting COVID-19, the home she’s spending so much time in is now lead paint-safe. And when her grandchildren return, she’ll have peace of mind letting them play in the house and yard.

“You never know, you might have lead all around your house. I’m just thankful that when they (tested for lead paint), I was glad they did find it because they could make sure to get rid of it,” Walls said, adding that she hopes more homeowners will take advantage of the free program.

Dave says: Use non-retirement account to pay off debt