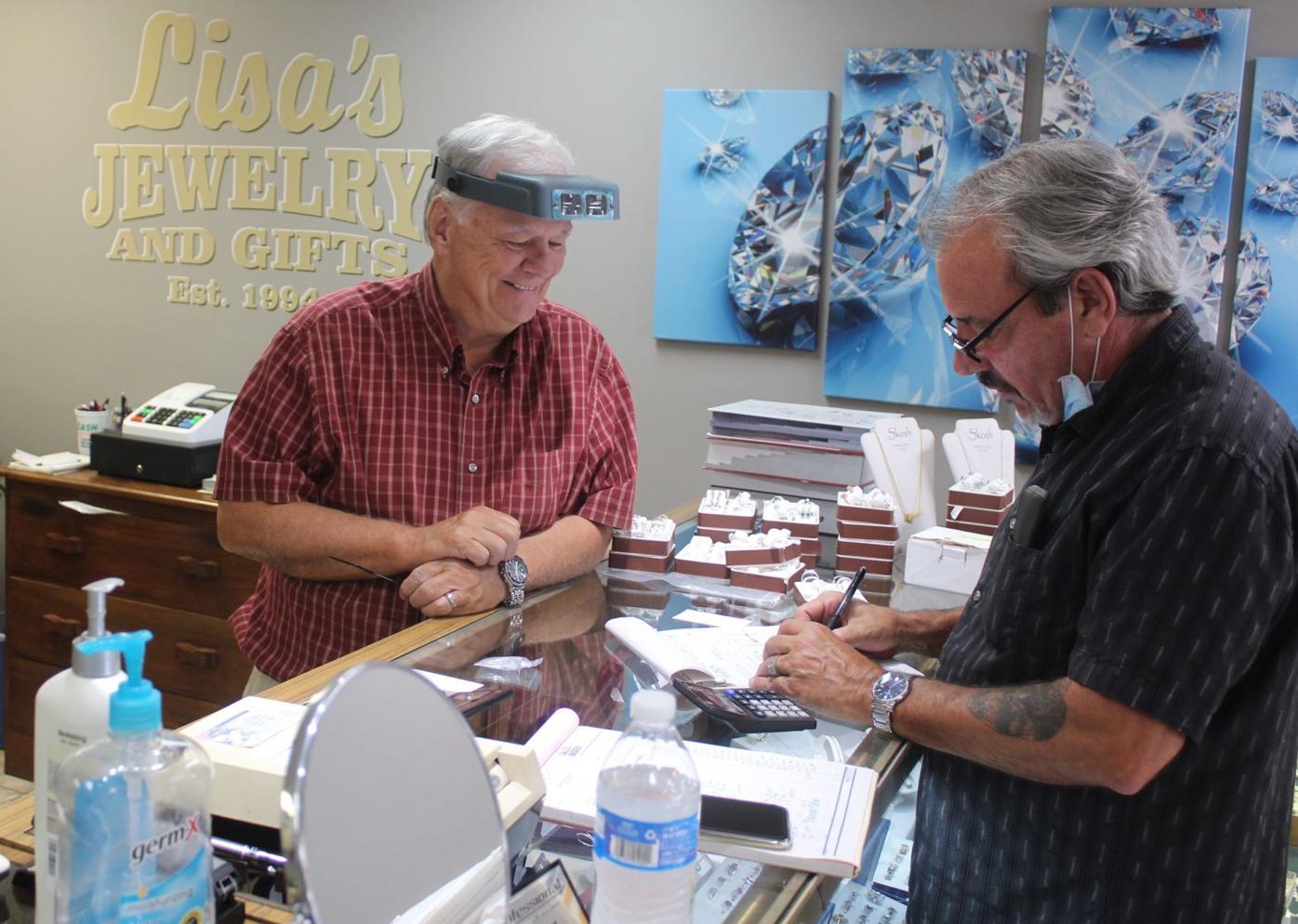 Jewelry salesman Terry Harrelson, right, writes up an order for holiday jewelry with Michael Tyree, who is co-owner of Lisa’s Jewelry in Amory with his wife, Judy. The Tyrees have operated the business in Vinegar Bend since 1994. 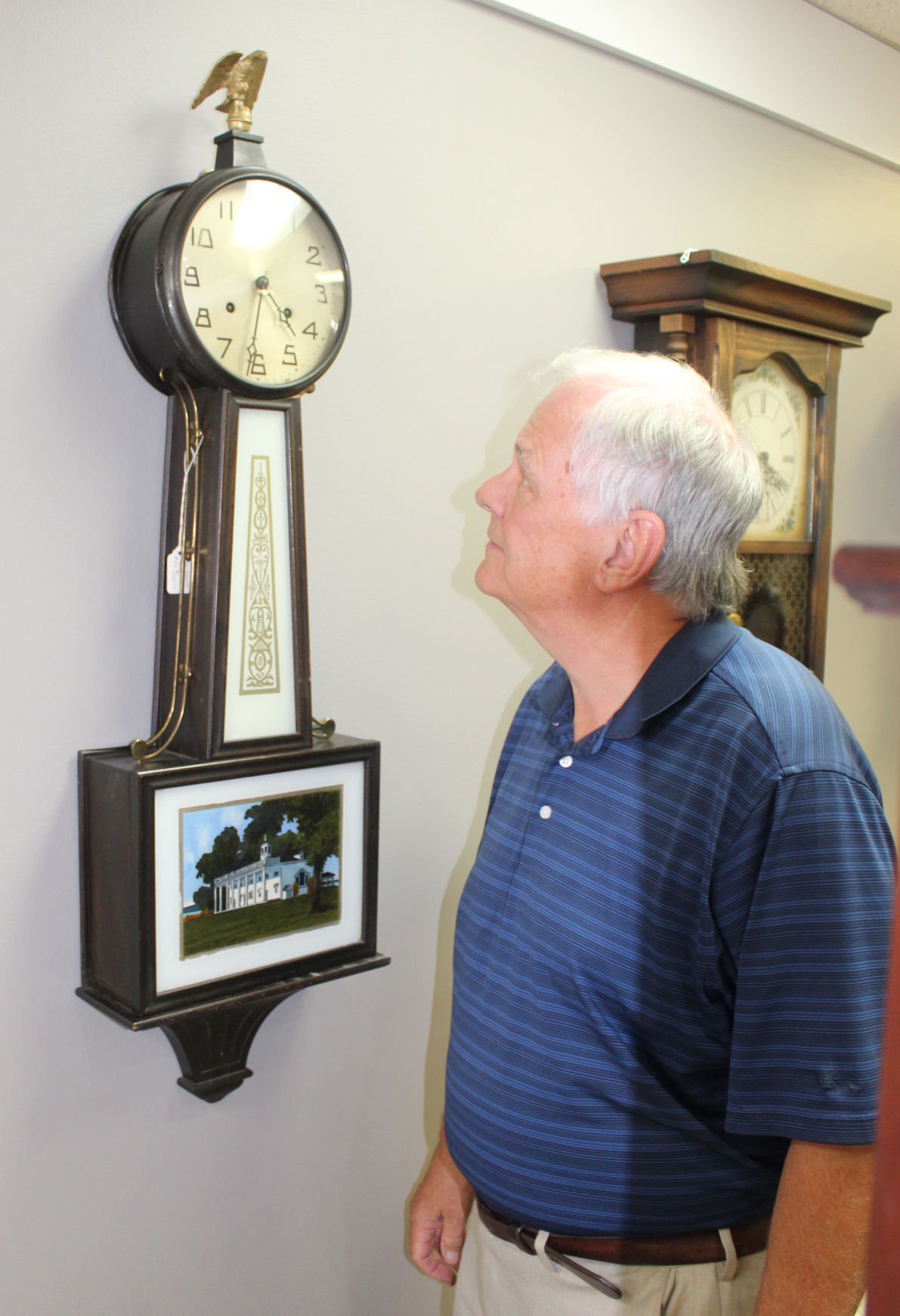 Tyree looks at an antique banjo clock from 1912 by Session Clocks.

Jewelry salesman Terry Harrelson, right, writes up an order for holiday jewelry with Michael Tyree, who is co-owner of Lisa’s Jewelry in Amory with his wife, Judy. The Tyrees have operated the business in Vinegar Bend since 1994.

Tyree looks at an antique banjo clock from 1912 by Session Clocks.

AMORY – Michael and Judy Tyree settled in Amory in 1993 to help her family in the restaurant business after Michael retired from a career in federal law enforcement. As time went on, though, the couple decided to venture into their own business.

“The days turned out to be too long for me in the restaurant business. I ran across a contact through Malcolm Roberts that got me interested in the jewelry business,” Michael said.

He went to school in Memphis to learn the jewelry trade the next year, and the couple found just what they needed in Amory – a vacated jewelry store.

“The rest is history,” Michael said.

He runs the business with expert help as needed from Judy and Derenda Foreman. Michael also gives kudos to family member, Randi Kathryn Eden, who has helped in the past before launching a career of her own as an educator. His grandson, Preston Hall, also helps out as his schedule permits.

The store is named after the Tyrees’ daughter, who helped get the business started and is now also a teacher.

Lisa’s Jewelry is a dealer for Seiko watches and Midas gold chains, which are available in all styles. The business also carries a full line of bridal rings and a beautiful collection of clocks – both new and antique.

The Tyrees are active in community service by making donations for door prizes to charity drives and clubs. They are also donors to St. Jude Children’s Research Hospital in Memphis.

Being a small town merchant, Michael tries his hand at whatever needs customers have.

“I’ve had someone come in to get a toaster fixed. Another customer came in once needing eyeglass frames put back together,” he said.

Michael doesn’t take full credit for being in business at the same location for more than 25 years.

“It’s the love and kindness of Amory and the surrounding communities that make the difference. People have put their trust and loyalty in us for these years. Amory is a great place to visit and shop,” he said.

The Tyrees are firm believers in service to their customers.

“You only get one chance to make a good first impression. That is what we try to do every day,” he said.

One of Michael’s most memorable moments to date is of a young boy who came in one day to buy a gift for his mother. He chose a pair of earrings.

“He pulled out all the money he had in his pockets but came up $20 short. I told him he would need to work a little more to come up with the rest,” Michael said.

A while later, the boy returned and offered Michael a Cal Ripkin rookie baseball card, and the sale was made.

“I located the boy’s father and made arrangements to return the card. It wasn’t about that card – it was about that gesture of sacrificial love that the boy showed for his mother,” he said.