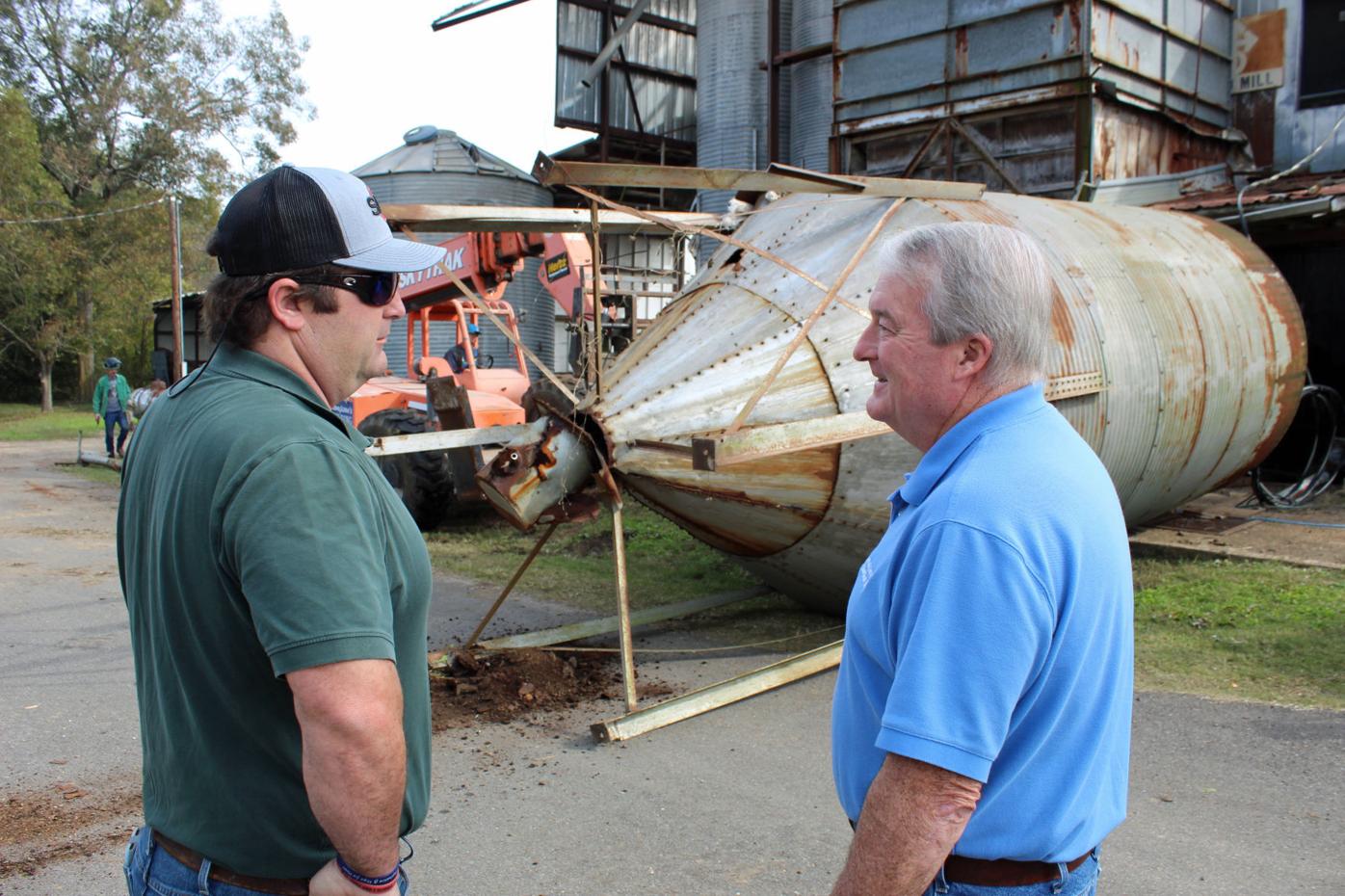 Ben and Ed Mattox talk while a crew from NexGen works on removing bins installed at Mattox Services in the late ‘60s or early ‘70s. 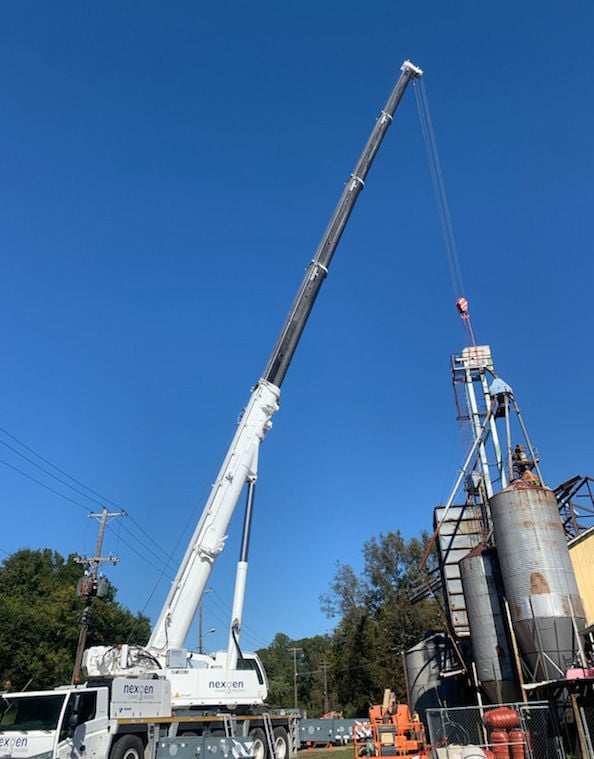 A crane works to remove a bin. 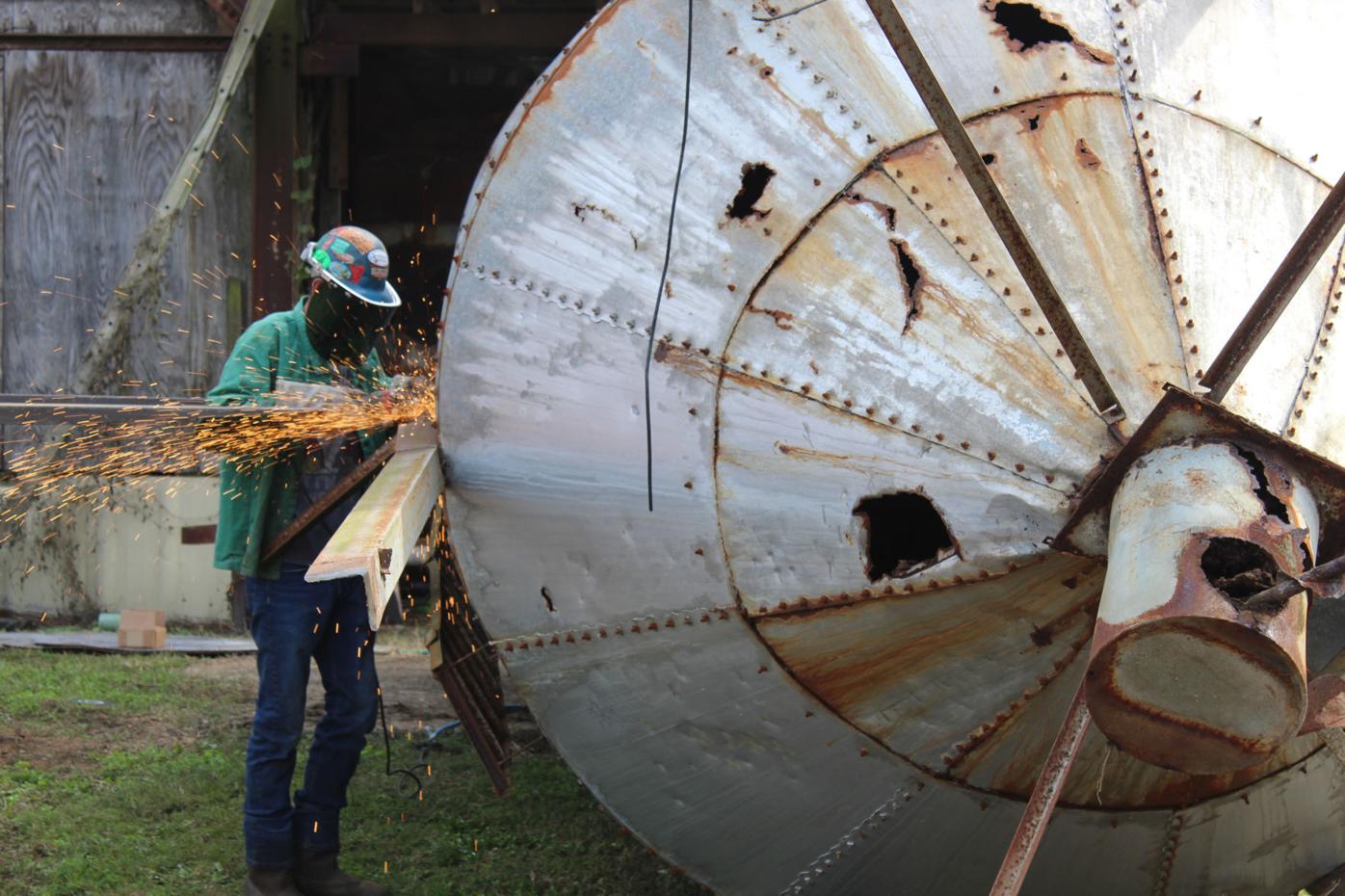 Sparks fly as a NexGen employee cuts a hole in the side of a bin.

Ben and Ed Mattox talk while a crew from NexGen works on removing bins installed at Mattox Services in the late ‘60s or early ‘70s.

A crane works to remove a bin.

Sparks fly as a NexGen employee cuts a hole in the side of a bin.

ABERDEEN – For years, Mattox Feed Mill, as it was formerly known, helped stock shelves at mom and pop grocery stores as far as 50 miles away and provide for a range of farmers with its feed products. As most smaller community grocery stores have succumbed to bigger franchises, Mattox-brand feed ultimately did too.

The towered feed bins that were reminders of that side of the business were recently taken down, making room for potential upgrades to Mattox Services’ retail, nursery and landscape ends of the business.

“When we quit manufacturing feed five years ago, we were the oldest manufacturer in Aberdeen. You look at Westlake, the old Seminole jeans manufacturer and even Tronox, and they came after us,” said Ed Mattox, third-generation owner of the business. “The bins have been a landmark, and part of history is coming down. Since we discontinued milling, those bins just stayed there and were deteriorating and becoming a liability.”

Altogether, 16 bins were erected in the time frame of the late 1960s and early 1970s for the purpose of automating a process of the business as it was evolving then.

“While my father [Q.F. Mattox] was in the South Pacific during World War II, he communicated with my grandfather [Q.E. Mattox] through letters. They wrote about the business they were going to start in Aberdeen when the war was over and he came home,” Ed said.

Q.E., who operated a business in Fulton, started pouring concrete in 1945, and Mattox Feed Mill opened in 1946.

In the years to follow, the business had poultry operations in Mississippi and Alabama, which led to the need for an automated process provided by the bins. He recalled the bins originating from West Helena, Arkansas, and Randy Rye doing most of the welding and fabrication work when they came to Aberdeen.

“Each one of those bins held a specific type of feed ingredient. When technology allowed us to manufacture more feed more efficiently, it allowed us to branch out to other outlets to sell for not only pastures and feed yards but also for a wholesale network where we sold to mom and pop grocery stores, which was a tremendous business in the ‘70s, ‘80s and even into the ‘90s,” Ed said.

His father went as far as 50 miles out to the north, west and south to make deliveries of the feed products.

“We had 28 labels registered with the State of Mississippi, from poultry to swine to cattle to dairy to pet,” Ed said.

In finally deciding to move forward with taking down the bins, Ed and his son, Ben, decided to use local contractors.

“We found our friends at NexGen [in Hamilton], and Brent and Barry Thompson and Justin Baulch said they could work it in and would do it for us. We had local people from Columbus Scrap to take them, and Brooke Toler, who is Tony Toler’s [of Hamilton] wife, works there and made the connection,” Ed said.

As far as utilizing the space in the future, thoughts have included moving mulch bins to that space, giving the garden center more space.

“We’ll keep you informed for what’s next, and new things are happening at the bottom of the hill,” Ed said. “I’m the third generation, and Ben is the fourth generation with the same name and location. I’m thankful for our customers, and we’re in the third and fourth generation of them too. The quality of service and product still means so much to us.”

OT Thriller: Tigers pull away in overtime against Noles