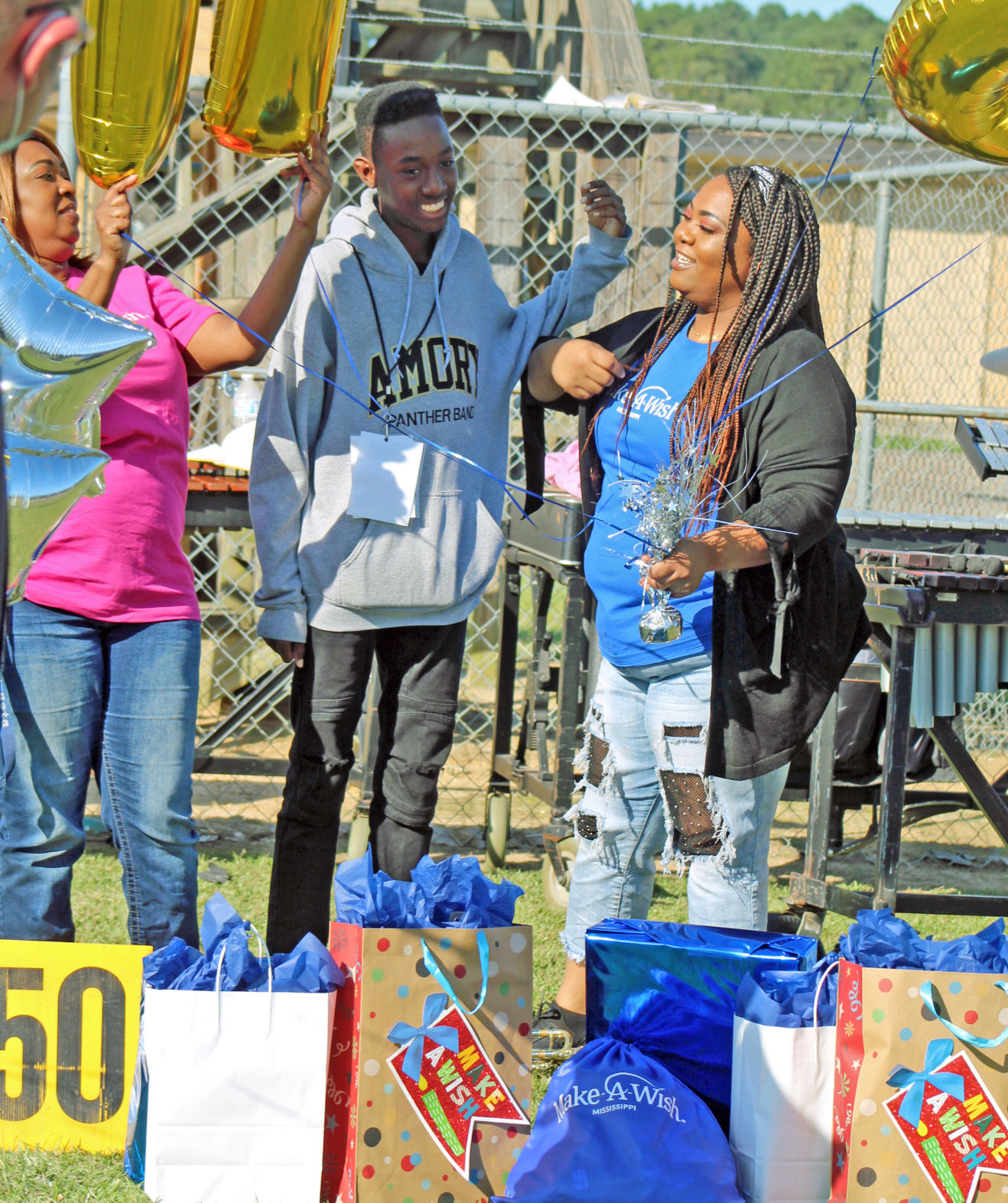 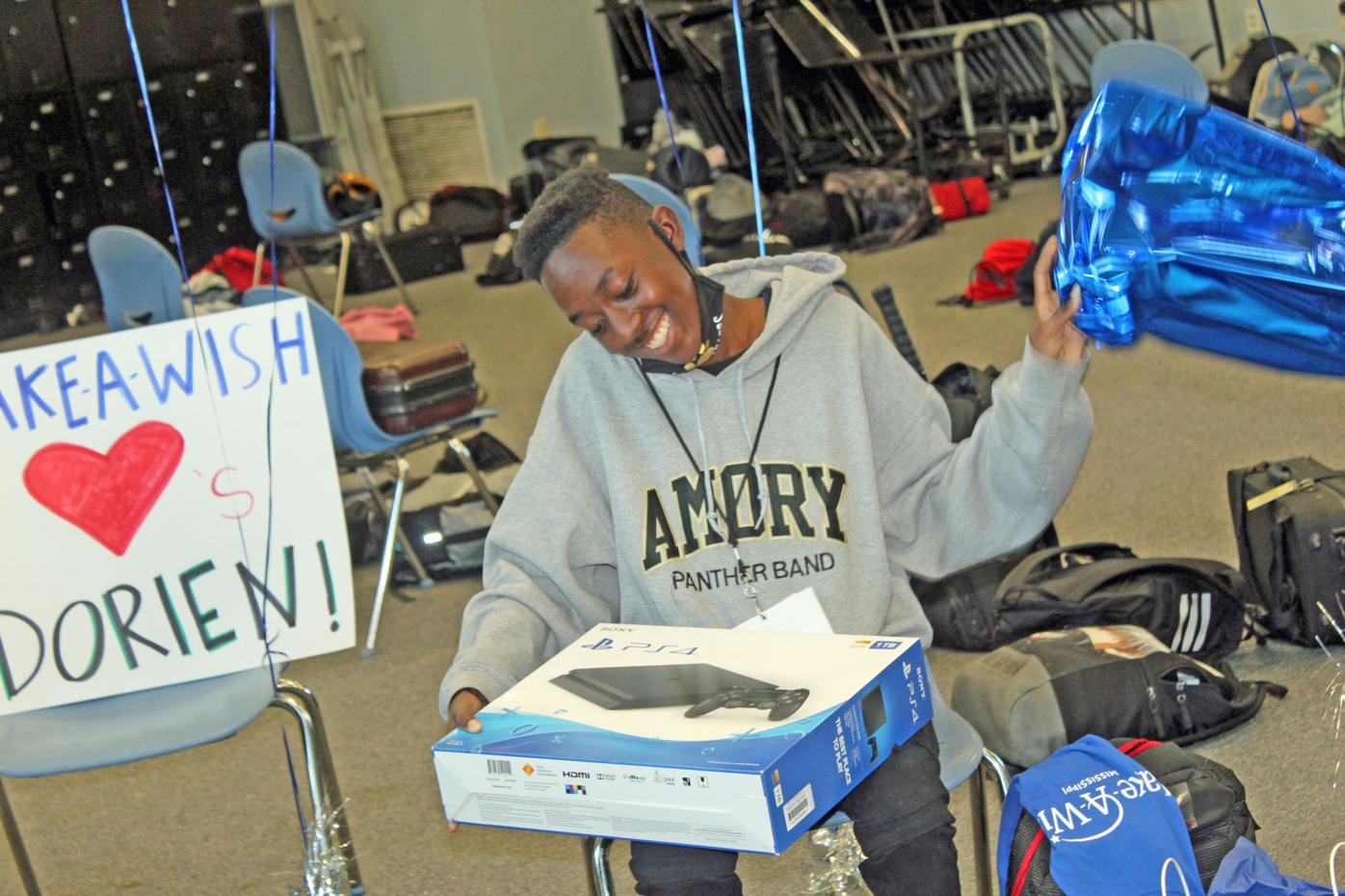 In addition to other things on his wish list, Griffin received a Sony PlayStation 4 console.

In addition to other things on his wish list, Griffin received a Sony PlayStation 4 console.

AMORY – Dorien Griffin is an Amory High School junior who has had to battle his way through life due to sickle cell disease but he is not giving up his fight.

During afternoon band practice at the Amory High School practice field, band director Jeff Colburn made the surprise announcement while Make-A-Wish Foundation members; AHS administrators and faculty; and Griffin’s family members walked onto the field with balloons and gifts.

“This is a big surprise. I didn’t know they would come to my school,” Griffin said.

Dorien was diagnosed with significant issues before he was even born. His mother, Chiquita, said that prenatal tests indicated Down syndrome, which was complicated by confirmation of sickle cell disease when he was only 3 weeks old.

The blood cell mutation is passed along through two genes inherited from someone’s parents. Studies show the disease is more common in African-Americans in the United States compared to other ethnicities, occurring in approximately one in every 365 African-Americans. A person who receives a gene for sickle cell disease from one parent and a normal gene from the other has a condition called sickle cell trait. Sickle cell trait produces no symptoms or problems for most people.

“I didn’t know I had that trait,” Chiquita said.

During one of his visits to the University Medical Center in Jackson, a nurse referred Dorien to the Make-A-Wish Foundation.

“Doctors and parents have to sign off on the application,” Chiquita said.

Dorien shopped Amazon.com to put together a wish list that included an iPhone, a Chromebook, clothes and shoes.

His wish was granted, and the original visit that was scheduled was delayed because Dorien was exposed to the COVID-19. Although he tested negative, he and other AHS students were put on quarantine.

Chiquita is a single parent who was hard pressed to be able to manage all the trips to Jackson needed for Dorien’s treatments.

“We now go every six months for follow up,” she said. “We never know when Dorien can have a crisis or how long the crisis will last.”

His last follow-up visit landed him back in the hospital from Feb. 14-22.

“Since the COVID pandemic came, he hasn’t been back to school. He has been tutored as a homebound student,” Chiquita said.

Dorien wanted to be a basketball player but didn’t have the energy needed to be proficient. He turned his aspirations to earning a karate belt with after-school sessions at Two Dragons Martial Arts Academy in Amory.

Indications of another crisis surfaced in February when Dorien stopped talking and drinking fluids. The whites of his eyes were turning yellow with jaundice.

“He takes 17 medications every day in addition to pain medicine as needed,” Chiquita said

Dorien has been undergoing treatments for 15 years.

“We have great support from so many,” Chiquita said.

The Griffins receive support from their family, their church, co-workers from three jobs, groups at Two Dragons, UMC in Jackson and Dorian’s local team of doctors, which includes Dr. Jacob Skiwski and Dr. Calvin French in Columbus.

“There have been so many that have pitched in to help, and the schools have been so supportive,” Chiquita said.