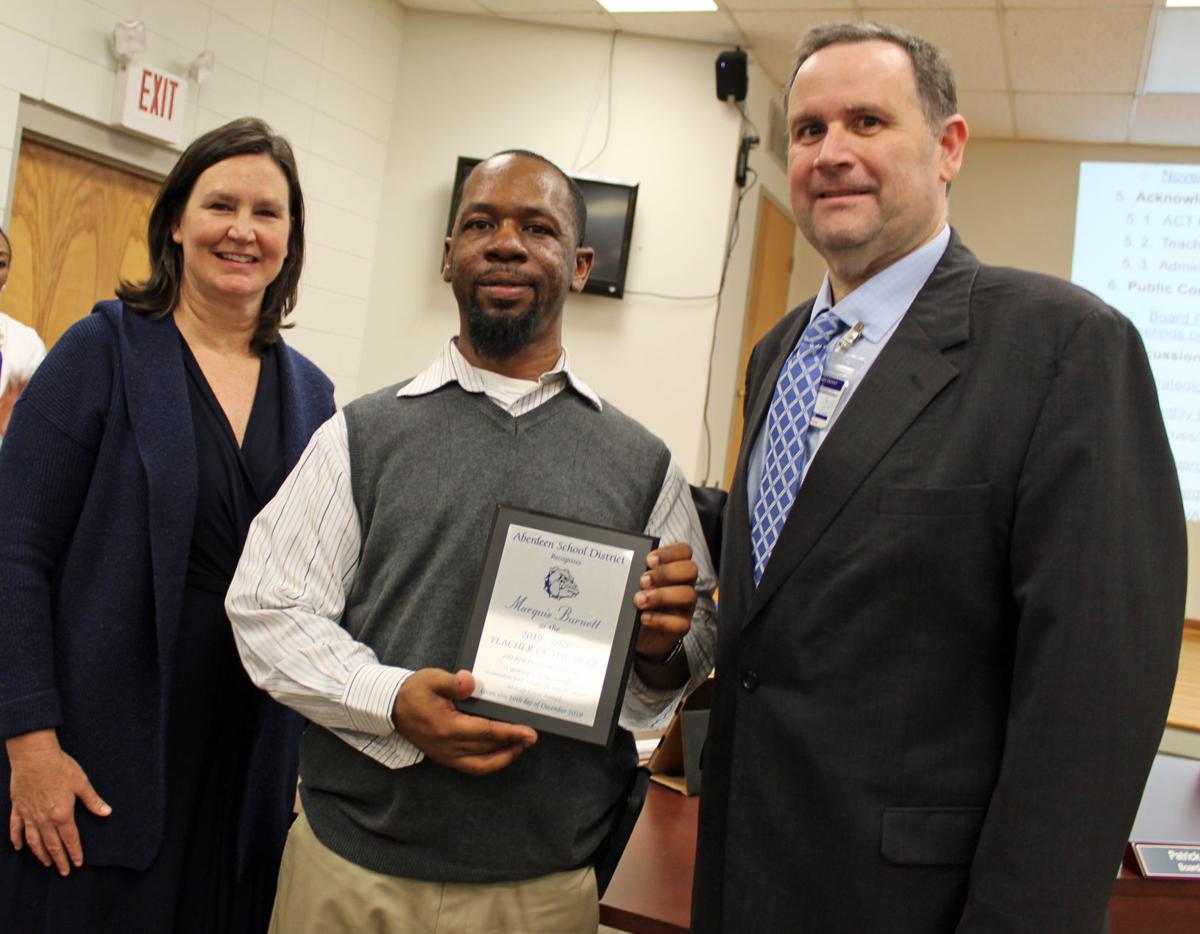 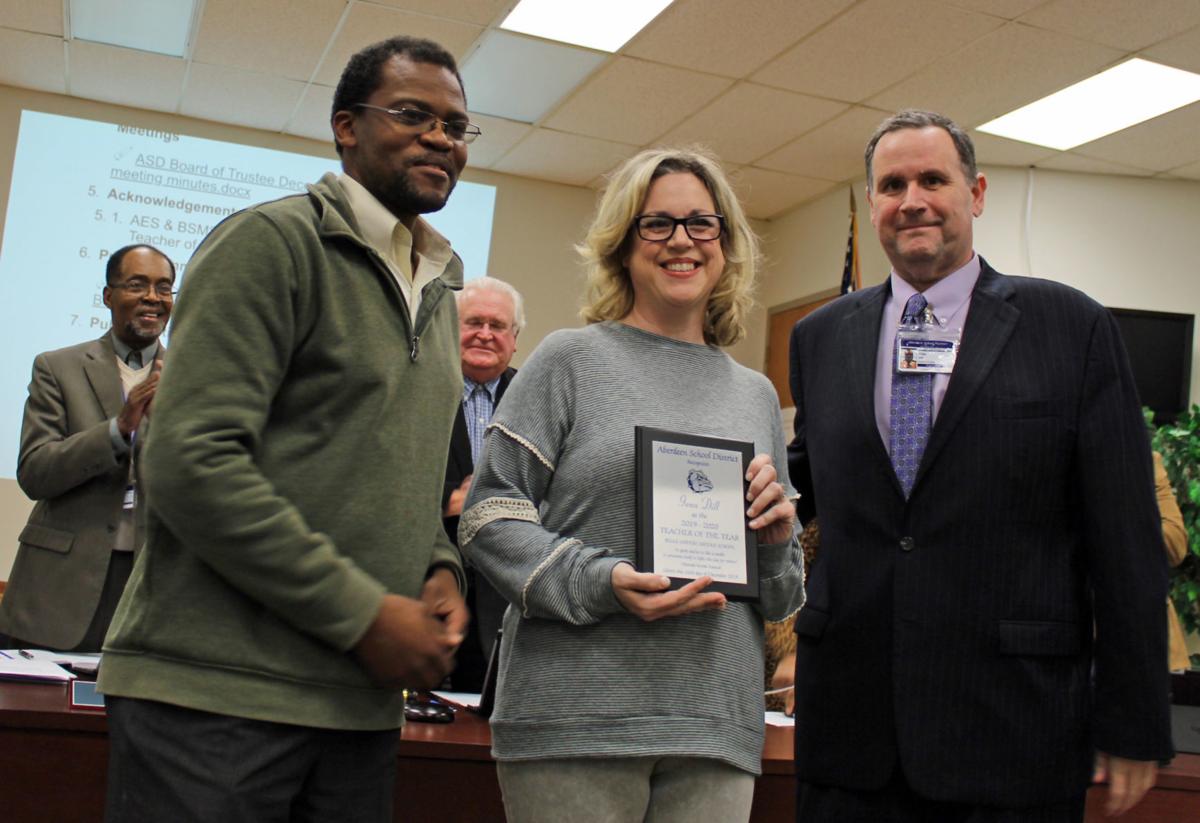 Gena Dill, pictured with district chief operations officer Willie Brandon and Clay, was selected as the Belle-Shivers Middle School Teacher of the Year. 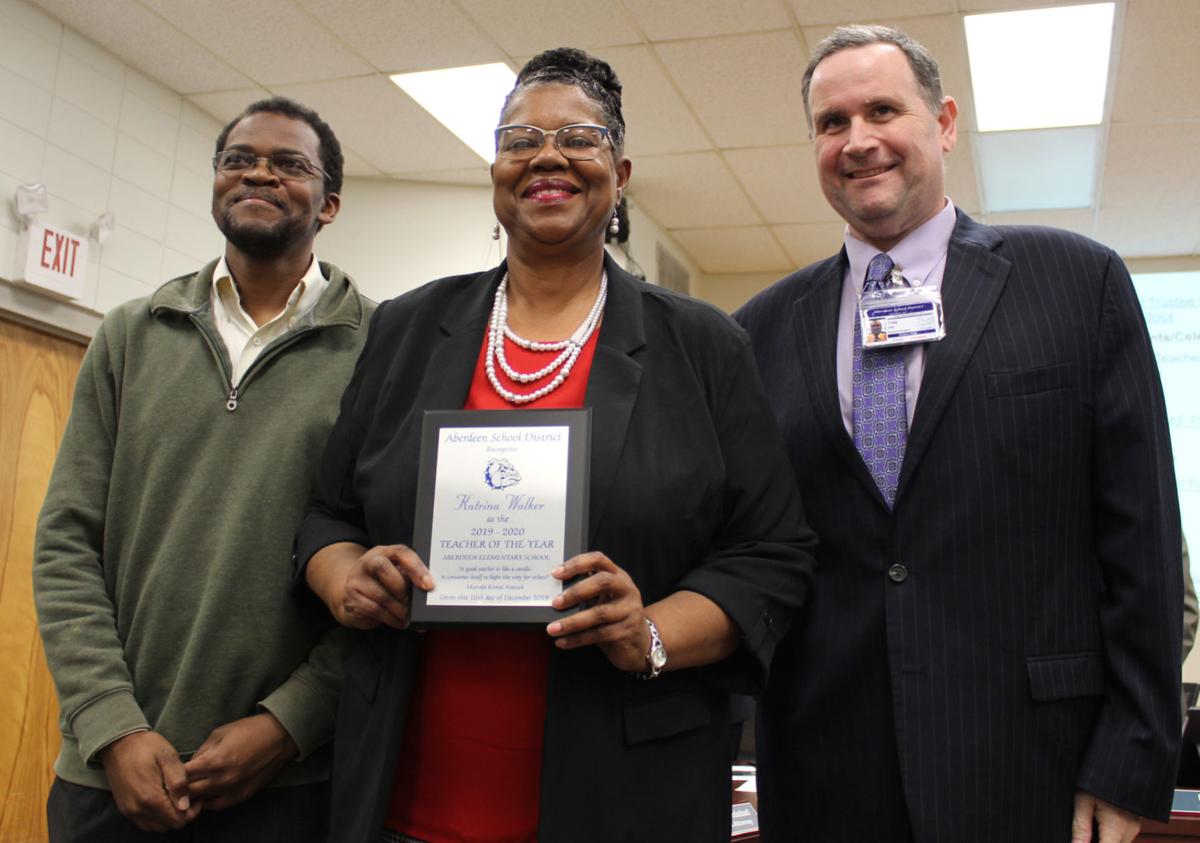 Katrina Walker was named as Aberdeen Elementary School Teacher of the Year.

Gena Dill, pictured with district chief operations officer Willie Brandon and Clay, was selected as the Belle-Shivers Middle School Teacher of the Year.

Katrina Walker was named as Aberdeen Elementary School Teacher of the Year.

ABERDEEN – The Aberdeen School District’s Teachers of the Year were recognized Jan. 16, with a high school coach and teacher taking top honors.

Coach Marquis Burnett, who teaches Algebra I, was absent due to coaching a basketball game but was recognized during the December school board meeting. Wintry weather during that meeting posed complications for all of the recipients to attend.

Aberdeen Elementary School’s Teacher of the Year is long-time kindergarten teacher Katrina Walker. She has worked in the district for 33 years.

“I’ve enjoyed it. Every year has been nothing but a pleasure. I’ve gone from the district with the ups and downs, but we took it with a smile, a stride and we have gone on. I will always love this like it’s my own,” she said.

“I tell everyone I love my job, I love my children, I love the people I work with,” she said. “I’m honored, I’m humbled and I thank you so much.”

“Of those eight, I’m proud to say four of them ended the first semester with a 4.0 [GPA]. Four students have nine hours of college credit with a 4.0. Two of them had a 3.66, and two of them had a 3.33,” he said. “When we started this, we had people say, ‘Our kids couldn’t do that.’ Our kids can do that, and they did do that and they were very successful.”

“It took care of some of the eighth-grade students. We had 17 who took it in December. I’m pretty proud we had three who scored 18 and two who scored 17. It’s pretty good for kids who had never taken the ACT,” he said.

In April, seventh-graders will be among Aberdeen students taking the test.

AHS JROTC instructor Sgt. Allen Williams gave a presentation about the program and the possibility of its participation with an aerospace science academy. He said there is a growing need for pilots as current pilots retire in the next 10 to 20 years.

He has networked with a contact in the aviation training industry who is in the position of negotiating with the Air Force about an interactive flight training program. Williams expressed a willingness of AHS’ unit to be part of a pilot program.

“On January 23, this company will be briefing the two-star general at Air Education and Command in San Antonio about their concept, and they’re going to say in that presentation that we have a relationship with one Junior ROTC unit in the country, and it’s Aberdeen, Mississippi, and it’s willing to come on board and be part of this process,” Williams said.

The school board approved the 2020-2021 district calendar, which includes Aug. 6 as the first day of school for students for next school year and May 25, 2021 as graduation day.

Following executive session, the school board approved to extend Clay’s contract for one year, which includes the 2021-2022 school year.