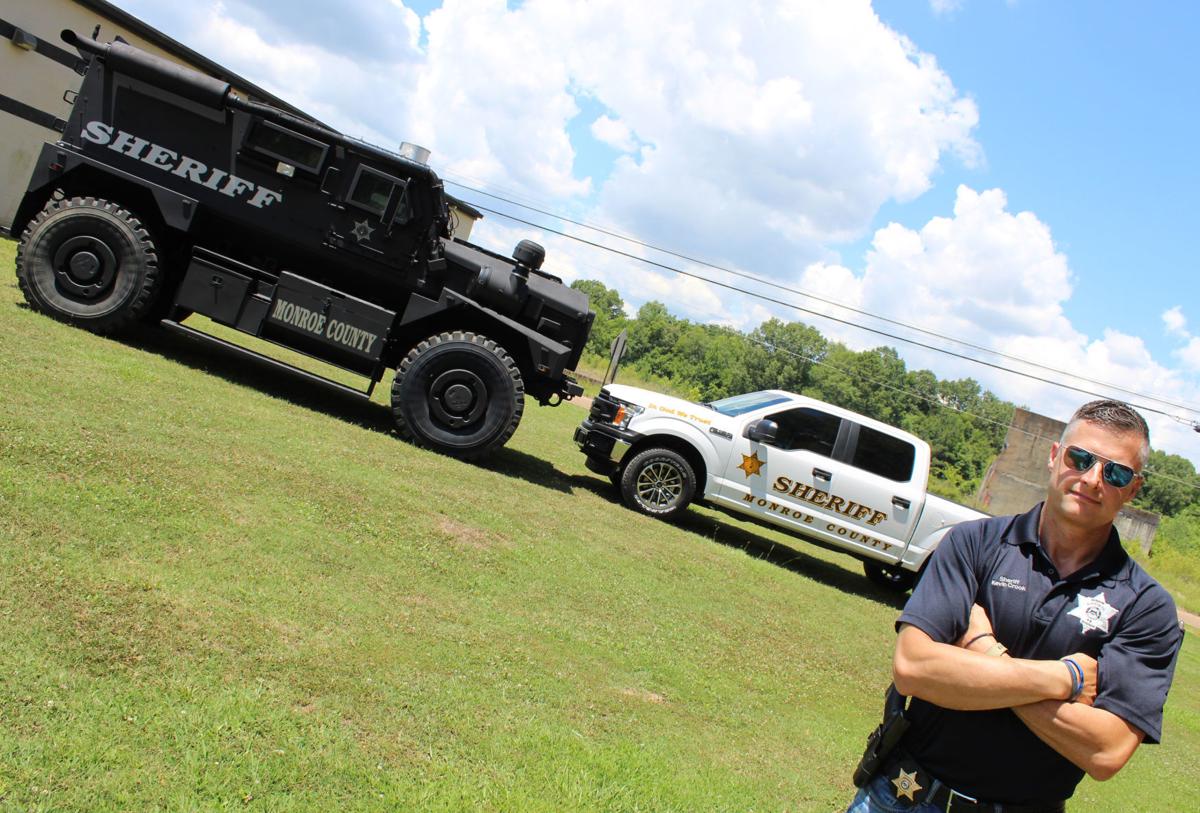 Monroe County Sheriff Kevin Crook stands in front of the department’s Mine-Resistant Ambush Protected (MRAP) vehicle and one of the new Ford F150s being added to road patrol. The MRAP was provided by funds donated to the department, and its purposes include search and rescue and standoff situations. 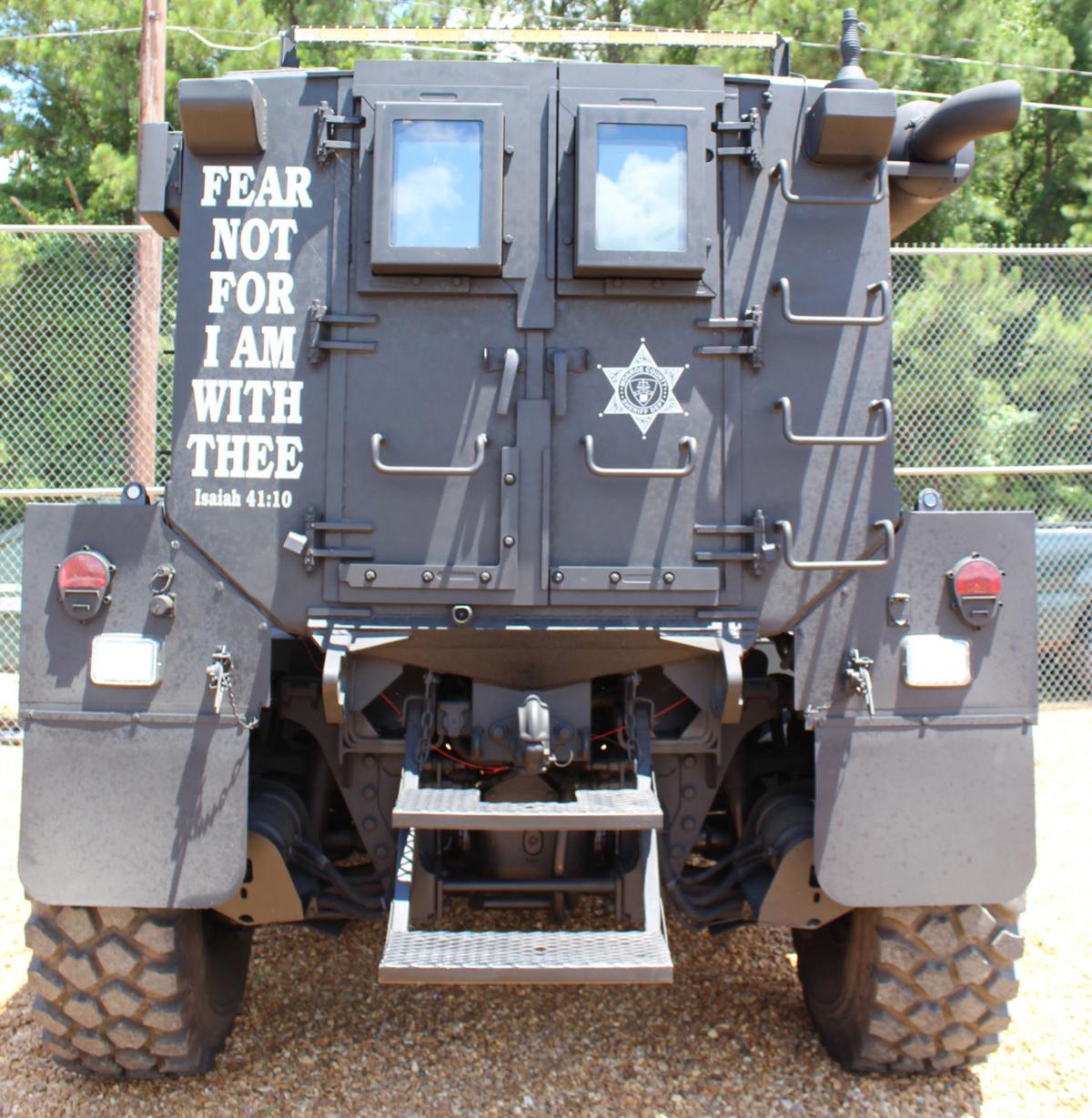 The MRAP was previously used by the U.S. Marines.

Monroe County Sheriff Kevin Crook stands in front of the department’s Mine-Resistant Ambush Protected (MRAP) vehicle and one of the new Ford F150s being added to road patrol. The MRAP was provided by funds donated to the department, and its purposes include search and rescue and standoff situations.

The MRAP was previously used by the U.S. Marines.

The Monroe County Sheriff’s Office’s new armored vehicle will offer an advantage to search and rescue efforts following floods and storms, missing person cases, instances of barricaded suspects and any situation when a person needs to be extracted.

The Mine-Resistant Ambush Protected vehicle (MRAP) was funded by donations from the public at no cost to the county. The effort to acquire the vehicle was initiated by Joey Miller and assisted by Willie Lockett, both of the sheriff’s office.

“I think it’s awesome to have your guys out there to use their connections to ask. It’s a blessing to know there’s enough people out there who want us to be equipped to protect this county, and we appreciate it,” said Sheriff Kevin Crook. “This is innovative. This is not something we could purchase from our budget.”

The backside of the MRAP has the message of Isaiah 41:10, which reads, “Fear not for I am with thee.”

The MRAP, which had 83.3 miles on it and even some seats still wrapped in plastic at the time of delivery, came to the MCSO from the U.S. Marines.

“It’s not a weapon of mass destruction. It’s to help the community and help keep us safe and protected,” said Capt. Billy Richey. “It’s a tool for the county and a tool for the guys when we deploy.”

As far as search and rescue, the MRAP can drive through water as deep as six feet. It will mainly be used by search and rescue and SWAT teams. It was on standby recently for if it was needed to assist in a standoff in Itawamba County two weekends ago.

Even though the armored vehicle looks intimidating, MCSO officials don’t want people to be intimidated by it.

“The perception can be terrifying, but it’s not for that. It’s solely for helping the community,” Richey said.

As intriguing as the MRAP is for all ages, the MCSO hopes it peaks interest from younger age groups, especially.

“This is a tool that can also be used as an outreach for kids. A prime example is at touch-a-trucks. I would love for this to be a relationship-builder, especially with the kids,” Crook said.

Adding to the patrol

In addition to the MRAP, the MCSO is rolling out new crew cab 4x4 Ford F150s to compliment its current inventory of vehicles for road patrol. There will be one F150 per shift.

“People aren’t going to be used to being pulled over by a crew cab truck. We’re putting light bars on the top for that reason,” Crook said.

Richey said the new trucks are the first new vehicles for road patrol since Ruble Maxey’s administration in the early 2000s.

“The last time we had snow and ice, we were picking up and dropping off RNs. This will help transport other first responders if we have more bad weather like that,” Richey said.

Crook added he’s happy Clark Ford submitted the low bid on the trucks so the purchase could be made in-county. Richey said help from the work center to install light bars saved the county $5,000.