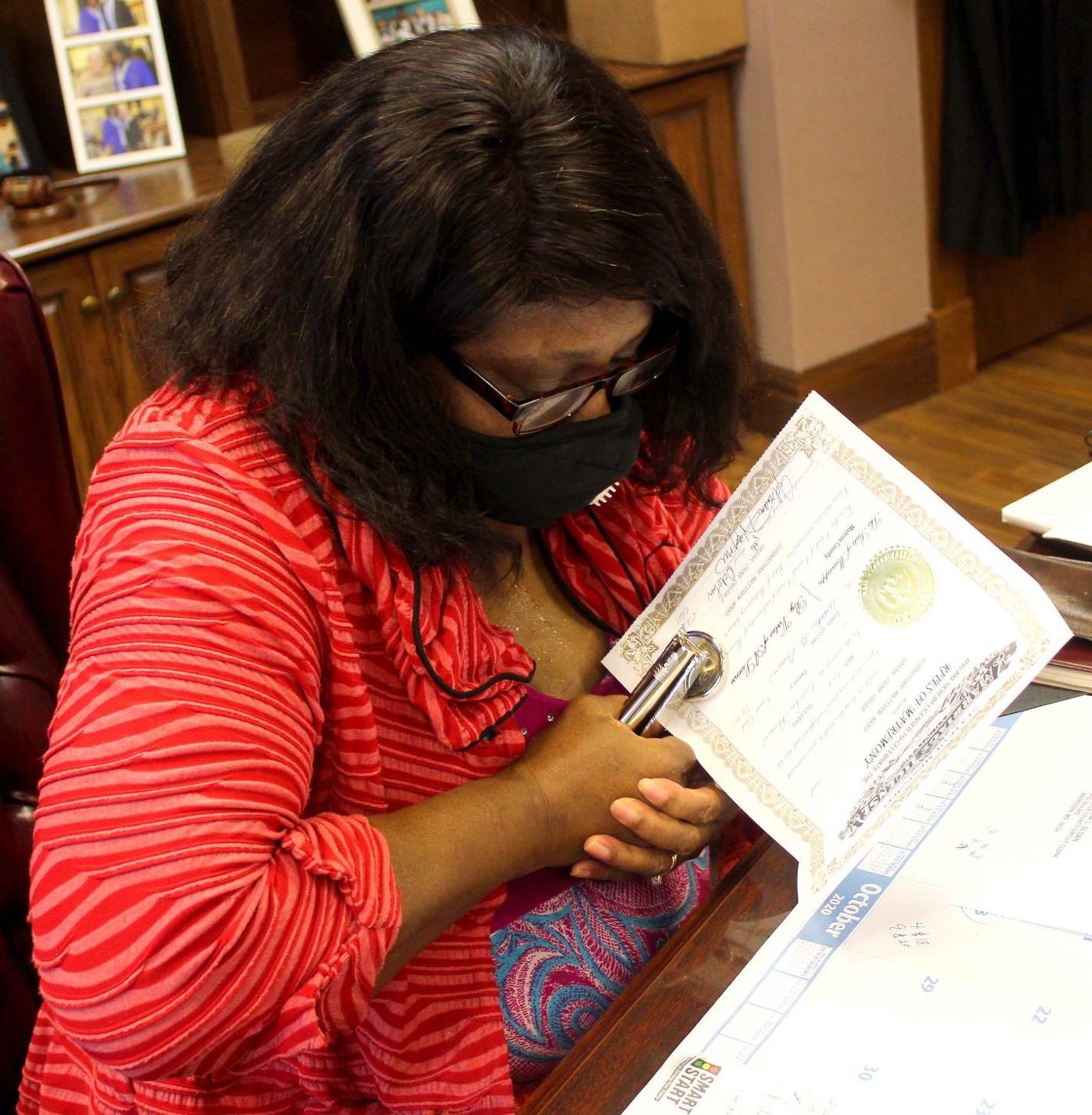 Monroe County Justice Court Judge Adrian McIntosh Haynes presses a seal onto a marriage license in her chambers after officiating at a wedding at the Monroe County Government Complex in Amory. 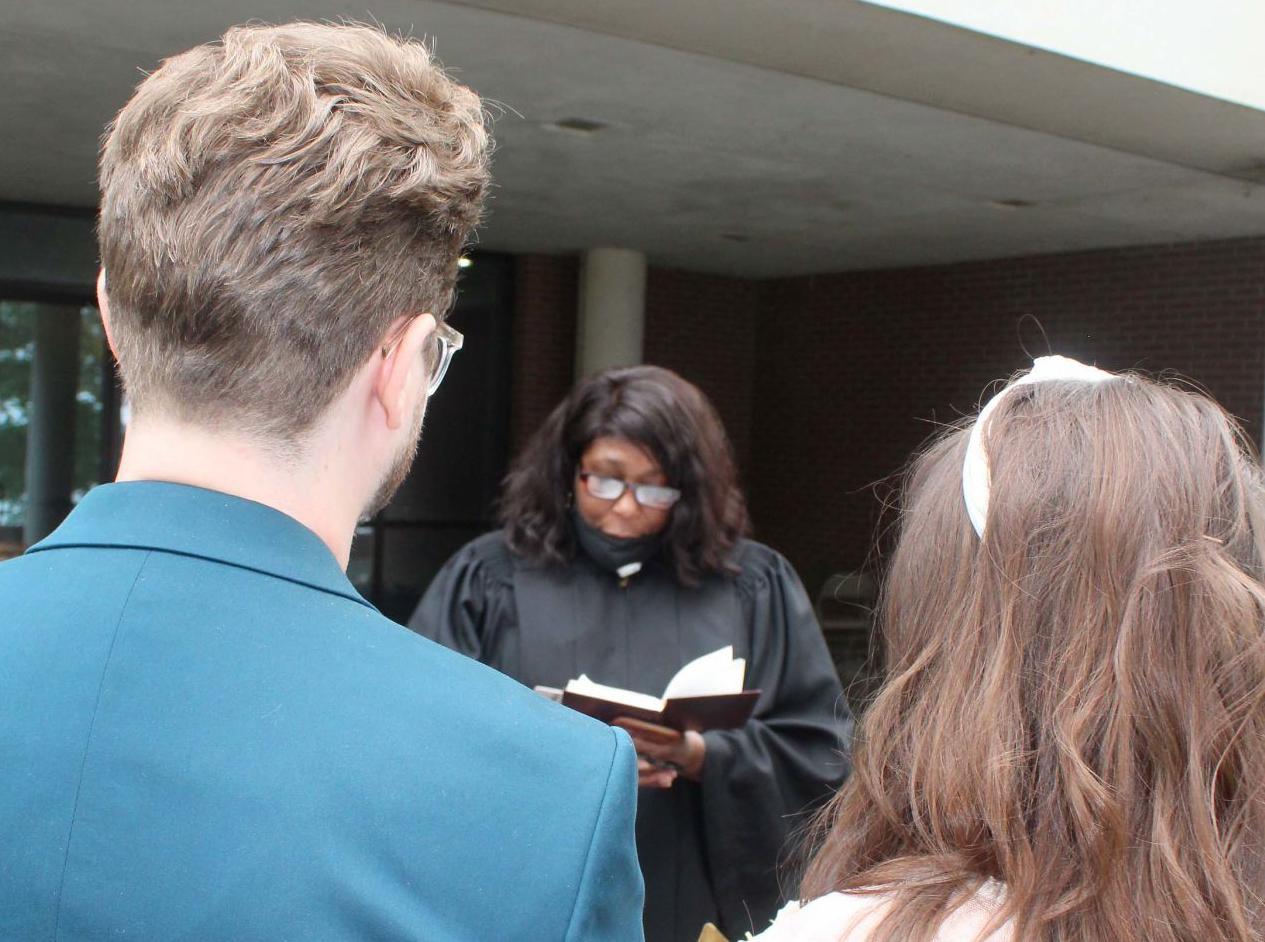 One of the opportunities in Judge Haynes’ career that brings her joy is presiding at weddings.

Monroe County Justice Court Judge Adrian McIntosh Haynes presses a seal onto a marriage license in her chambers after officiating at a wedding at the Monroe County Government Complex in Amory.

One of the opportunities in Judge Haynes’ career that brings her joy is presiding at weddings.

AMORY – Monroe County Justice Court Judge Adrian McIntosh Haynes of Wren investigated a number of different directions in pursuing her professional career before being elected to serve on the bench, representing District 3.

She is not only the first female but the African-American to serve as a judge in Monroe County – first as municipal judge for the City of Aberdeen and then Monroe County Justice Court, where she has been elected to five terms thus far.

“My motto is firm but fair. I take my job seriously and I take the law seriously,” she said. “I’ve always wanted to help my community. My hope was anchored in prayer.”

She is the sixth of seven children born to the late Phillip and Dezzie Pierce McIntosh and has been married for nearly 50 years to her high school sweetheart, Coleman Haynes. They are the parents of two children, Scott and Jana, and two grandchildren, Deontae and Malachi.

Haynes’ interest in entrepreneurship took her from banking to public service, all the while doing freelance stints on the side in specialties that varied from auditing and real estate to sewing.

“After graduating from Itawamba Community College as a business major, I couldn’t find a job in that field. I wanted to work in an office setting, preferably in bookkeeping or accounting,” she said.

Haynes is a graduate of Amory High School and credits former Amory Middle School Principal Dexter Montgomery as being one of her mentors who saw the potential in her life.

“He wanted me to be a teacher though,” she said.

She’s also thankful for the companionship and advice of a couple of ladies in her life – Marilyn Pickle Reed and Anita Wax.

Haynes’ work history began with duties under Montgomery as the school’s library assistant before moving on to a position with Security Bank, where she worked with Reed, who encouraged her to run for a vacant seat on the Amory School Board. She first befriended Reed through shopping for material at Reed’s Fabrics for her sewing projects.

“She was my bridge to further my venture into the marketplace of work. I took her advice and ran for the school board position but lost by 12 votes,” Haynes said.

She continued to press forward in not only the workplace but also by gaining exposure through community service projects through her church.

Haynes eventually won a seat as District 5 election commissioner but resigned that position a couple of years later to run for justice court judge.

“You do not have to be a lawyer to be a judge in Mississippi, but there is a rigorous regimen of study and continuing education required for judges,” she said. “The laws keep changing.”

Haynes believes in doing what it takes to make positive strides for the judicial system, as well as for community and families.

“I seek to serve with character, integrity and respect. Doing what is right was scared into my brother and me by strict parents,” she said.

Haynes believes in the opportunity of the second chance that will help lead offenders toward finding their purposes in life.

“I would like to see more programs to help people. I believe in rehabilitation rather than incarceration. I want to let people talk and discuss their cases and needs with me. I can’t let them down,” she said.

She is striving to see her peers behind the bench to work together rather than independently.

“We need a level foundation of like-mindedness where we make decisions together to exhibit the same respect and same integrity,” she said. “We need to deal with issues in a positive light.”

Haynes encourages respect for the person regardless of position in life.

“Kids think we don’t respect them, but we don’t disrespect anyone,” she said.

Haynes noted two things that come with her duties as a judge that bring her joy – the thanks she receives from people and peers and the privilege of making people happy in officiating weddings.

She is thankful for the position in life that she thinks God gave to her when she was ready for it.

“When God places you, I believe He expects something of you,” she said. “I just want kids to look at me and say to themselves, ‘I can do this.’”

Tigers ready for the grind of playoffs

Lady Bulldogs accustomed to dealing with breaks in season

Panthers recharging during their week off