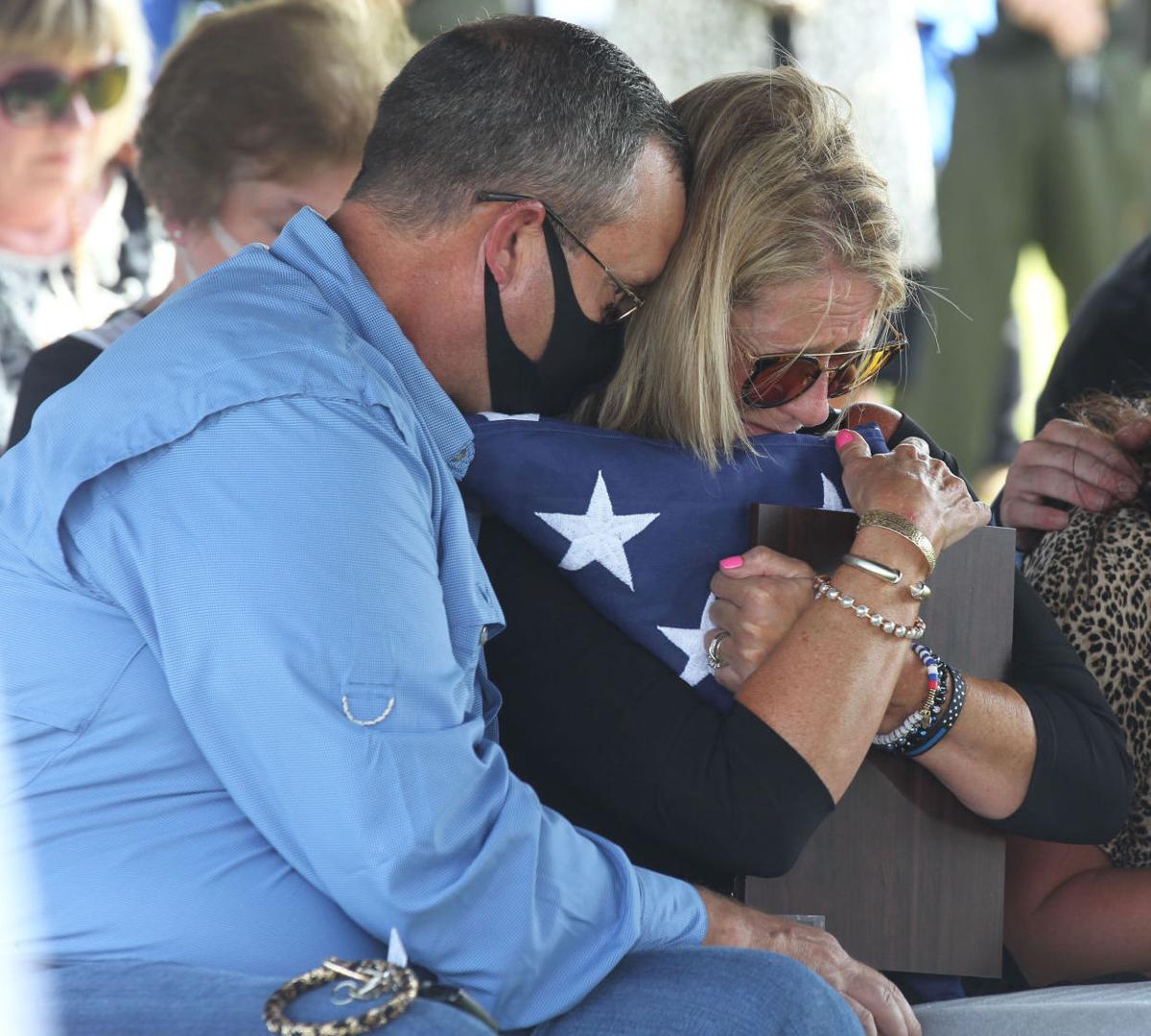 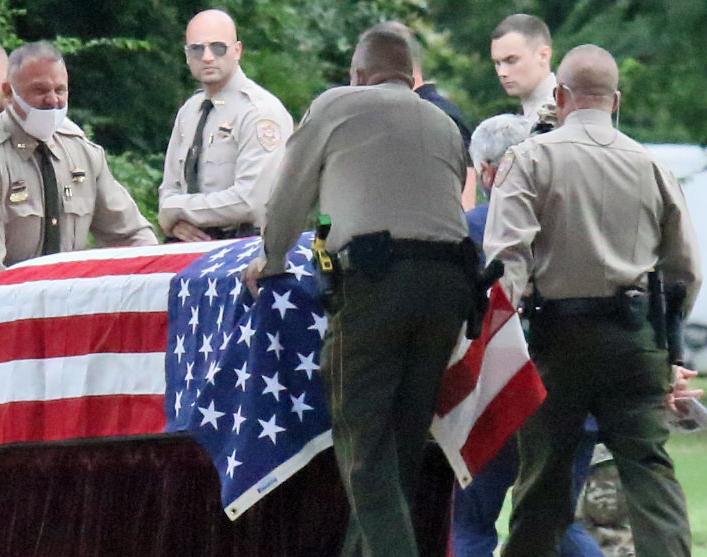 Pickle’s casket is moved from visitation at First United Methodist Church to the hearse. 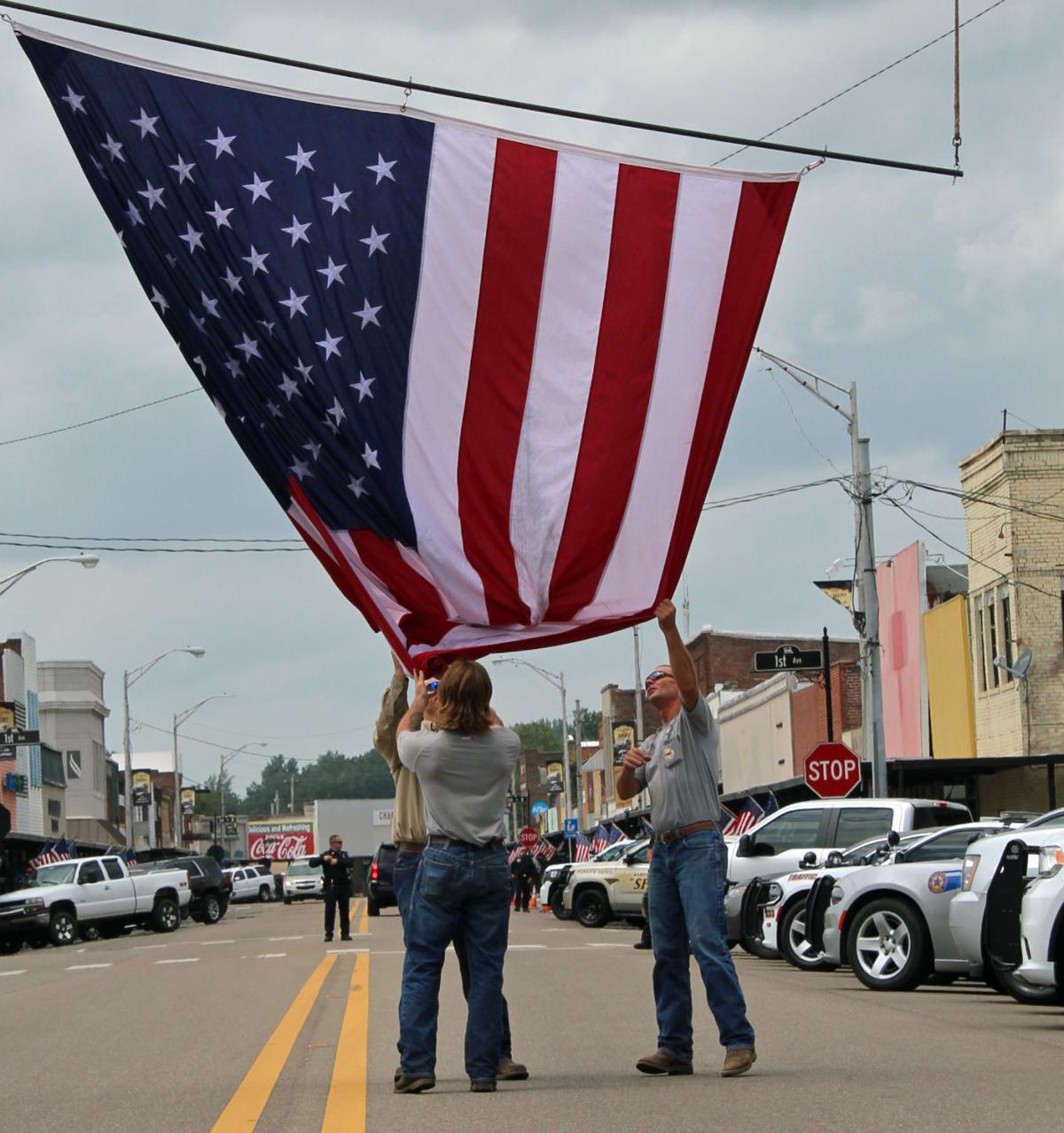 Amory Electric Department linemen raise an American flag over Main Street in honor of Pickle for the funeral procession. 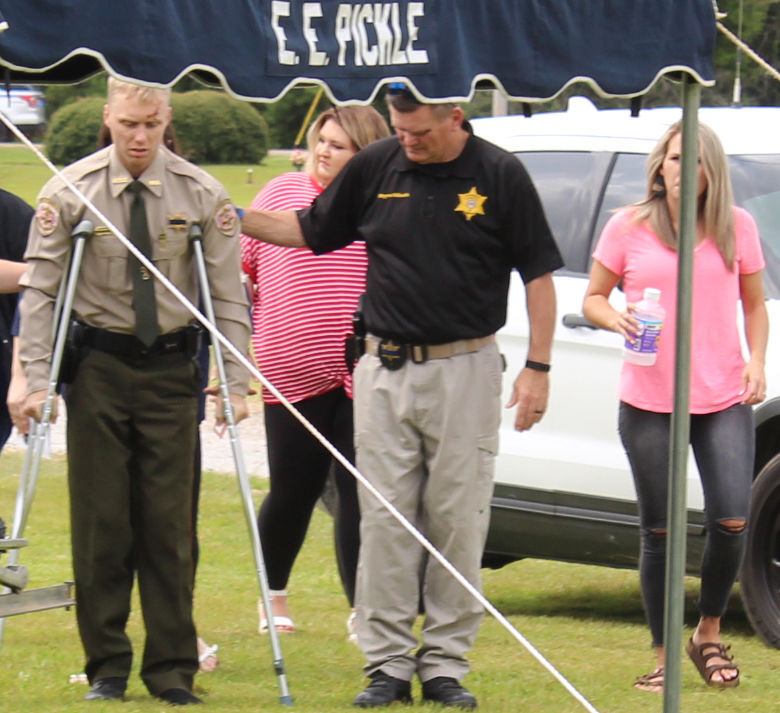 Monroe County deputy Zack Wilbanks is helped by his father, Wayne, to his seat for Pickle's funeral. Wilbanks was also struck by a vehicle at the checkpoint.

Pickle’s casket is moved from visitation at First United Methodist Church to the hearse.

Amory Electric Department linemen raise an American flag over Main Street in honor of Pickle for the funeral procession.

Monroe County deputy Zack Wilbanks is helped by his father, Wayne, to his seat for Pickle's funeral. Wilbanks was also struck by a vehicle at the checkpoint.

AMORY – Fallen Monroe County deputy Dylan Pickle was remembered last week for his drive to be a law enforcement officer – a spirit that’s left a deep impact on the county since he lost his life following an accident in Hamilton July 25.

Pickle and another deputy, Zack Wilbanks, were struck by a vehicle at a checkpoint. Wilbanks, who was present at the funeral, continues to heal from his injuries.

The accident has shaken the Monroe County community, which has shown its strong support for law enforcement at a time when the institution of police has fallen under scrutiny throughout the nation.

“You represent the great majority of Americans that are moved by the loss of a first responder or a soldier. Why is that? Because they truly support and depend on people like Dylan,” said Monroe County Sheriff Kevin Crook, who officiated Pickle’s funeral July 30. “Don’t let the world or big media outlets tell you people have changed their mind about Dylan. They respect him and appreciate him, and there’s proof all around you today.”

Members of law enforcement from across Mississippi were joined with several local fire departments for the procession from First United Methodist Church to Haughton Memorial Park for the graveside service.

Amory Main Street was lined with American flags in honor of Pickle, who served in the military before joining the Monroe County Sheriff’s Office as a jailer. During his military service, he was deployed to Syria.

Crook cited a missionary named Henry Martyn who said, “You are immortal until God’s purpose with you is complete.”

“In other words, there was not one thing anybody could have done to change the outcome. It’s not one thing anybody could’ve done over the past 24 years of Dylan’s life to cut it short on Saturday night. God had a purpose and a plan and He ordained those years for him and he graciously gave us that time with him. God had a purpose for Dylan, and Dylan fulfilled that purpose.

“When our nation is at such a time of turmoil, to put Dylan’s kindness, his gentleness, his thoughtfulness, his selflessness and his love and his passion for serving others for the whole world to see…that’s what God does,” Crook said.

Since he was 4, Pickle dreamed of being a police officer. That dream was recently fulfilled as he began working patrol less than a month under shift supervisor Lt. David Mitchell.

“When Dylan first found out he made patrol, he was the most excited I’ve ever seen him,” Mitchell said. “He told me they changed his badge number to M17, which was my badge number before. We were talking on the phone, and he told me, ‘I’m going to make you proud.’ I am so very proud of him. In the time he started to work on my shift, I could tell he had the calling to be a law enforcement officer. He had a servant’s heart and in my mind, that’s the first step of doing this job.”

During the funeral, M17 was called out over the Monroe County Sheriff’s Office radio channel, followed by the message that he has finished his duty on Earth.

“Deputy Pickle, we thank you for your loyalty, dedication and service to the citizens of Monroe County. Monroe 17, you may be gone but not forgotten. Your courage and valor will always be in the hearts of your brothers and sisters. Blessed are the peacemakers for they shall be called children of God. Monroe 17, I love you from Monroe 5 to Monroe 911,” Mitchell said over the channel, which also had dispatcher Sandy Livingston on the line.

Following the accident, the Monroe County community has pulled together in a unified show of support, from blue and black ribbons with Pickle’s M17 call number on doors to yard signs on display.

The Monroe County Brother’s In Blue Facebook page was also set up as a resource for fundraisers to benefit the Pickle and Wilbanks families.

People also followed encouragement to wear blue Thursday as a tribute to Pickle.

Police officers from multiple agencies such as Houston, Greenville and Okolona police departments and the Panola, Sharkey, Hancock and Oktibbeha County sheriff’s departments lined the east side of Amory Main Street and joined in the procession as an American flag strung between two Amory Electric Department bucket trucks waved overhead.

Crook asked for continued thoughts and prayers for the families of Pickle and Wilbanks.