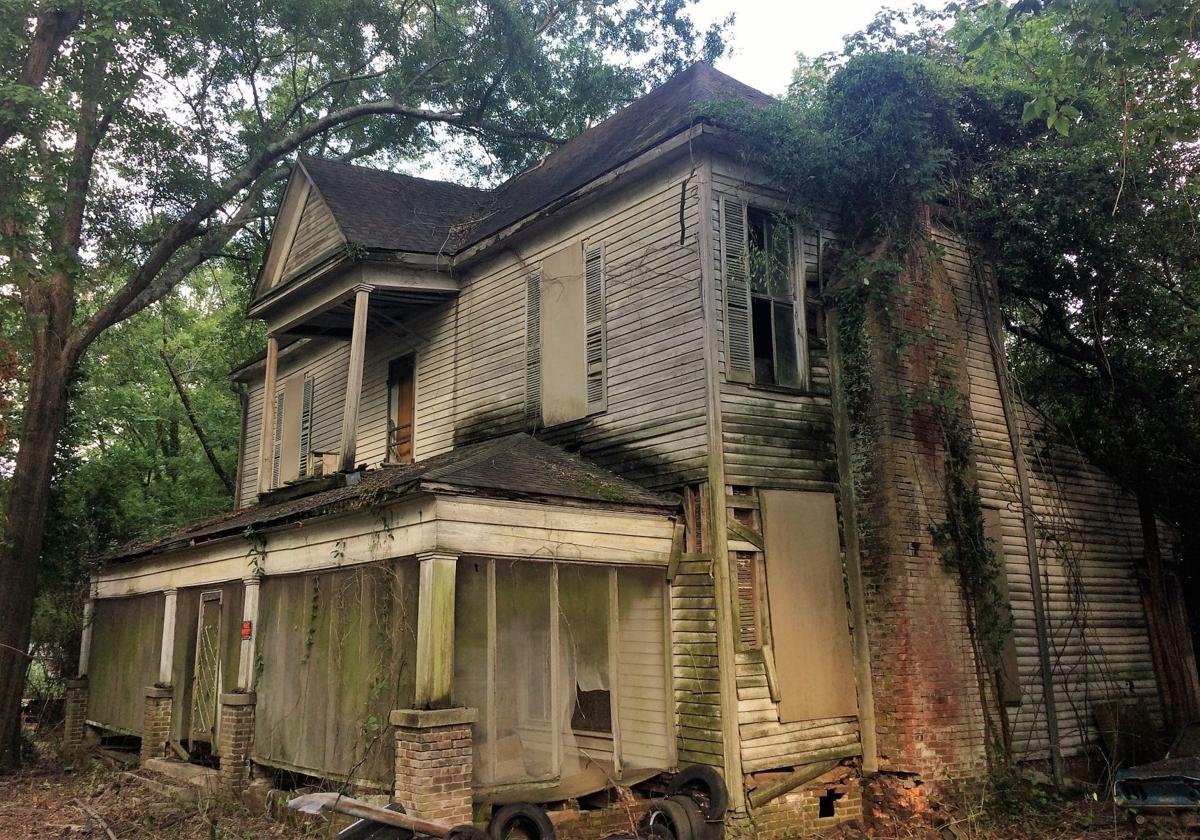 The historic Hester homestead alongside Highland Drive is getting some long-awaited grooming that is revealing a number of cars that were collected through the years by Tibbett and his brothers. The home has been vacant since the passing of Tibbett’s mother, who was its last inhabitant. 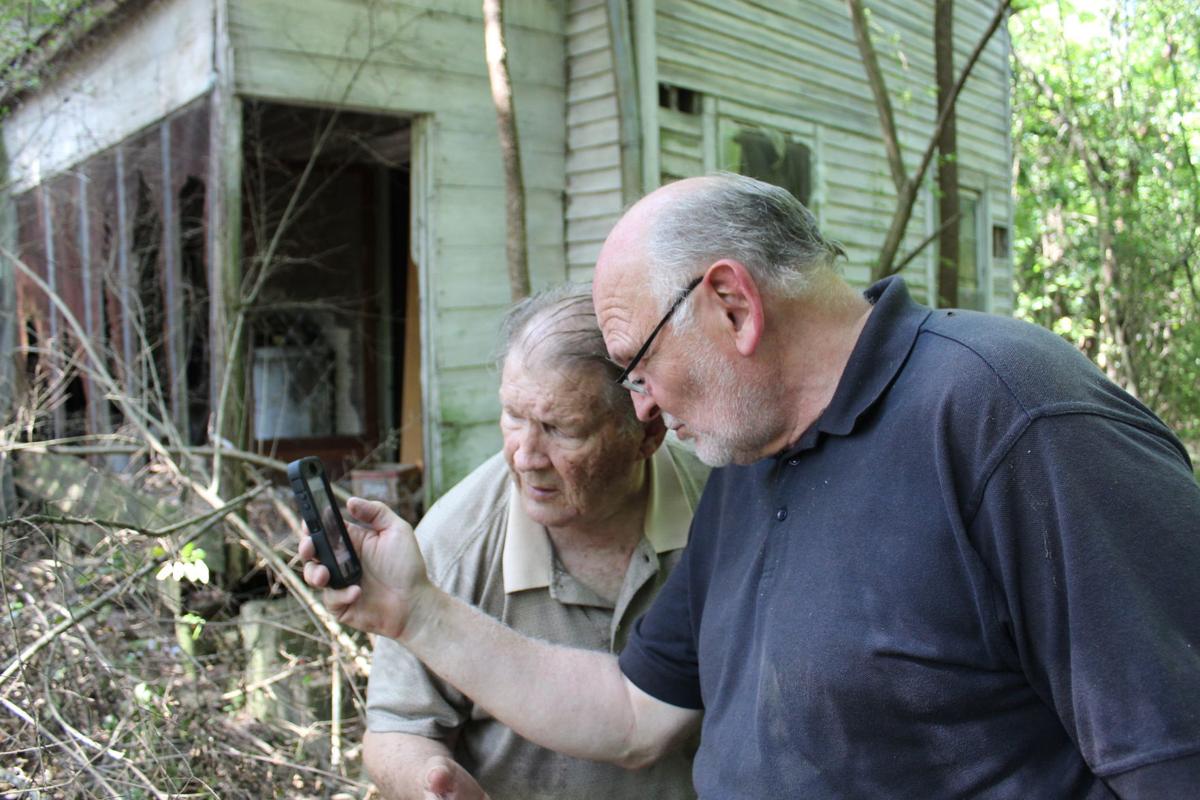 Bill Tibbett, left, views photos taken of the interior of the historic family homestead by his cousin, Tom Hester. Hester has come to Tibbett’s aid to provide contract help to clean up the stately property on Amory’s north side.

The historic Hester homestead alongside Highland Drive is getting some long-awaited grooming that is revealing a number of cars that were collected through the years by Tibbett and his brothers. The home has been vacant since the passing of Tibbett’s mother, who was its last inhabitant.

Bill Tibbett, left, views photos taken of the interior of the historic family homestead by his cousin, Tom Hester. Hester has come to Tibbett’s aid to provide contract help to clean up the stately property on Amory’s north side.

AMORY – The estate of Chesley Columbus Hester once encompassed more than 700 acres crowned by a home place alongside Highland Drive and an area of Black Cat Bottom extending to the Tombigbee River.

The bottom-land property was reduced by half when portions were sold to the U.S. Army Corps of Engineers during the development of the Tennessee-Tombigbee Waterway. The home, however, is still in the family at 1300 Highland Drive.

For years, it has remained vacant but is currently undergoing a property cleaning, peaking the curiosity of many in Amory.

The home’s present owner, Bill Tibbett, is the son of the youngest of Hester’s seven daughters. He is now in his late 70s. Although his health is failing, his resolve remains to save and restore the historic home in which he grew up.

His desire is that the estate’s home will eventually be a restored landmark to compliment the history of Amory.

“I’m doing the best I can for Amory and my family,” he said.

A grandson of Hester’s only son and Tibbett’s cousin, Tom Hester of Mobile, Alabama, has recently come to document the present condition of the home. He has photographed its look after much-needed work to clear the years of overgrowth that hid away several vintage automobiles, ranging from a 1936 Ford sedan to a late 1960s Mustang coupe, parked around the house.

“Billy is a retired football coach and was a star athlete inducted in 2009 to the Itawamba Community College Athletic Hall of Fame,” Hester said. “After retiring from coaching, he worked for the Post Office, taking after his mother, who was a mainstay at the Amory Post Office for many years. He and his brothers also inherited their father’s mechanical abilities and collected the cars that are on the estate.”

According to Hester’s research, his family came to Amory from Alabama and bought the house in 1913, where three generations of the family have lived. Tibbett’s mother, Fay, and her family were the last Hester relatives to live in the home, after which it has been uninhabited.

She lived alone in the house after the death of her husband in 1964 until the early 1990s. She began to have falls, and some dementia set in, so she became unable to continue to live alone and moved in with her sister.

Going back to another previous owner, C.C. Hester is remembered to have run a neighborhood grocery story across the street from the home at the intersection of Old Highway 6 and Highland Drive.

One of the older Hester sisters directed the home economics department at Mississippi State University, managed the Hester Estate after the death of her father and also developed the nearby Meadowbrook Circle subdivision on a portion of inherited estate property, according to Hester.

The massive two-story home is Craftsman in style, with a screened side porch enclosed through the years around the back. Beadboard ceilings in the porches were painted sky blue, which still remains.

“They called the color haint blue,” Hester said. “The colloquial name of the color was adopted from early African-American culture to ward haints, or ghosts, away from the home.”

There is a marker on a portion of the property away from the house in an area where evidence has been found of a prehistoric colony. According to the marker, evidence dating activity of a prehistoric civilization from 10,000 years ago was discovered in 1973.

“It is called the Hester Dig. Each year, Mississippi State University brings students to the site who are enrolled in an excavation- and survey-based archaeological field course for continued explorations,” Hester said.

The deepest layers of the site have been found to contain Paleo-Indian and Early Archaic artifacts, a period of occupation dating from 9000 BC to 7000 BC. Per the National Historic Landmark nomination, all of the layers contain evidence of the manufacture of stone tools using locally abundant chert, or microcrystalline quartz.

Almost all prehistoric tools in the zone recovered by archaeologists suggest that activities in the area could be associated with hunting, butchering or related processing of wild game. The site is one of the largest Archaic sites in the southeast and yields bountiful clues to archaeologists about the Meso-Indian period in North America, which lasted from approximately 8000 to 1000 BC.

The property was listed on the National Register of Historic Places in 2001.