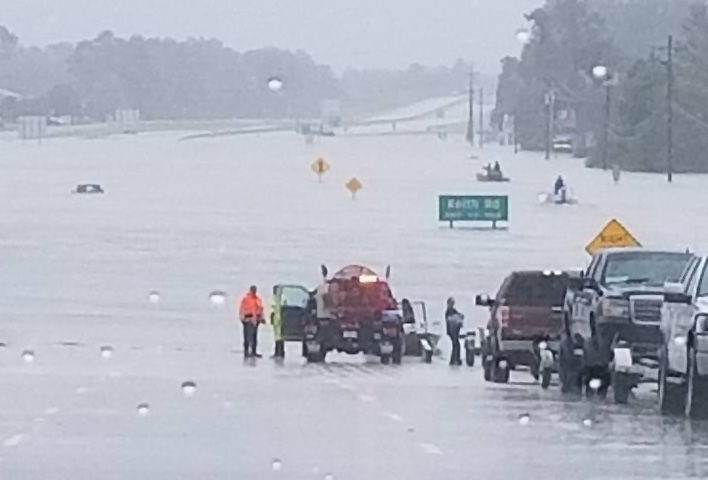 Floodwaters following Hurricane Harvey in the Lumberton, Texas area illustrate disaster many Texans are enduring. An outreach effort through Monroe County churches is helping with relief. 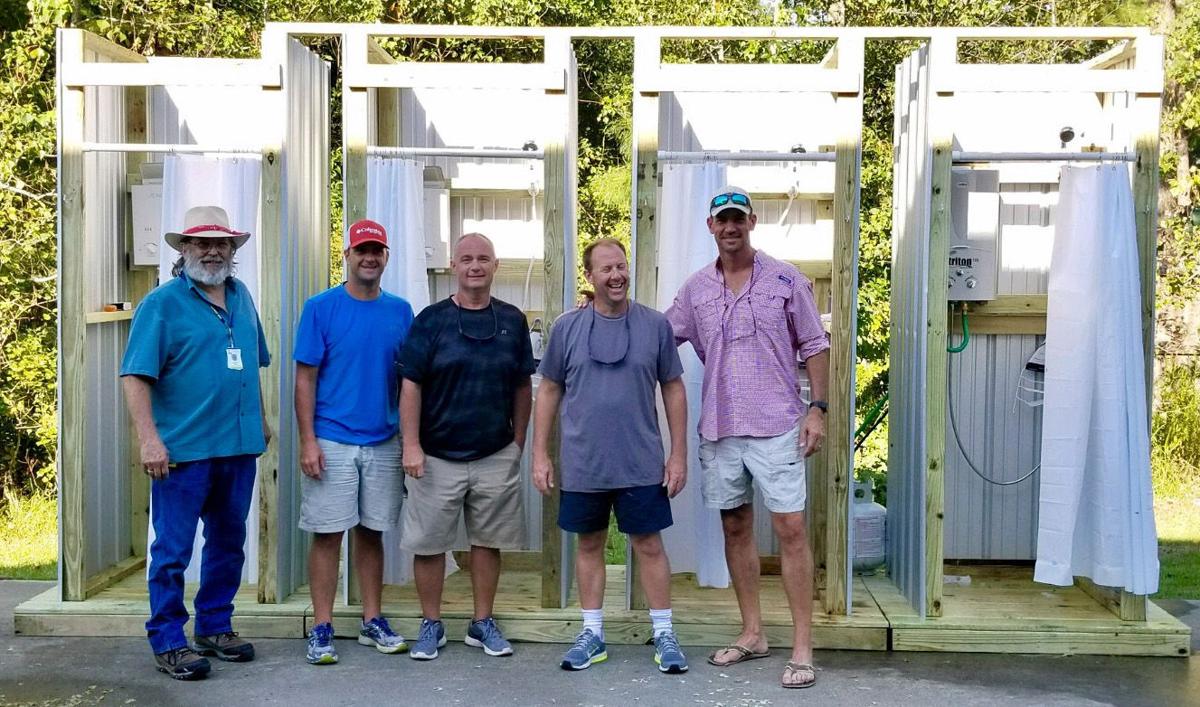 Damage is illustrated following Smithville’s EF-5 tornado in 2011. A county in Texas adopted Smithville in its aftermath to give back.

Floodwaters following Hurricane Harvey in the Lumberton, Texas area illustrate disaster many Texans are enduring. An outreach effort through Monroe County churches is helping with relief.

Damage is illustrated following Smithville’s EF-5 tornado in 2011. A county in Texas adopted Smithville in its aftermath to give back.

SMITHVILLE – From the aftermath of Hurricane Ike, the April 27, 2011 tornado outbreak through Hurricane Harvey, a thread of paying it forward has connected a Texas community with Smithville for the past six years.

“It really was a God thing how it happened,” said Bro. Danny Biddy, interim pastor of Crestwood Baptist Church in Lumberton, Texas. “After Hurricane Ike, a county in Minnesota adopted our county and sent us a gift. After the tornadoes went through, we wanted to find a place to help.”

In 2011, Biddy was a member of a long-term recovery team in Chambers County, Texas, approximately 60 miles away from his current location. Through being in touch with north Mississippi Baptist pastors, he was referred to Smithville Baptist Church leader Brad Stevens to coordinate help. After some time, Chambers County donated $55,000 to help in the Smithville tornado relief effort.

“I was like everyone else in our community in trying to put things back together while dealing with the federal and state authorities and am ashamed to admit that I thought at the time that I was much too busy to deal with this preacher from Texas who called every day for several weeks attempting to line up a trip for me to come to Texas and speak to his church,” Stevens said in retrospect of the tornado. “God finally used my executive assistant, Vicky Lawrence, to stop me in my tracks one morning and say, ‘You’re not going anywhere else or taking on another request for assistance until you’ve called this Danny Biddy fellow from Chambers County, Texas.’”

The Chamber County donation provided for nearly 50 storm shelters at Smithville Attendance Center’s temporary campus, which are still available for Monroe County students at the Advanced Learning Center and the career and technical center. They were moved there since Smithville, Hatley and Hamilton’s campuses have dome shelters.

“One thing I remember was, ‘Okay, we’re going to put a temporary campus in at Smithville, and people were concerned since we just went through what the community did, and the shelters were a great way to ease the tension,” said Monroe County Superintendent of Education Scott Cantrell.

Additionally, Access Family Health Services in Smithville was able to purchase X-ray equipment from the donation.

“I will never forget the day they flew here and gave checks. It was very humbling when people you’ve never seen before raised that much money. We put a plaque in our lobby for those who made donations so they’ll always be remembered,” said Access Family Health Services Executive Director Marilyn Sumerford.

Before receiving the X-ray equipment, patients had to be referred to Gilmore in Amory for the service. Now, patients from Tremont utilize the X-ray service in Smithville.

Members of the two communities connected and have remained close between the times after the tornado and Hurricane Harvey, and Biddy has remained a solid part of the link.

As Texas residents are going through their own tragedy now, Stevens and three other members of the Smithville Baptist Church Men’s Ministry Team recently traveled to Lumberton, Texas to begin repaying the love and support Smithville received. They delivered several thousands of pounds of supplies, as well as four portable outdoor shower units constructed in Smithville then dismantled and erected on site at the Crestwood Baptist Church campus for mud-out crews and relief workers.

“They drove all night long, worked all day and drove back that night,” Biddy said. “It’s amazing how difficulties can turn into great delight.”

“We’ve received grace and we want to be administers of the same grace. We want to do onto others as God has done onto us,” said Bro. Wes White of Smithville Bapstist Church. “I think this is a picture of how God’s progression looks in our lives. He prepares us for service even when we think we’re not being prepared. In the process, God prepared us for how we’ll serve others.”

Lumberton’s population is 12,984, and even though the middle of the town was spared from flooding, both ends of town were inundated. Hundreds of homes took in three to 10 feet of floodwater from Hurricane Harvey. So many people in the area did not have flood insurance.

“When an owner goes into a home, it has been turned upside down. What personal belongings they can save, they can, and the rest of their life is sitting on the curb,” said Kevin Johnson, a deacon at Crestwood Baptist Church. “As far as relief, people love them enough to show up and get their house to where it can start drying out and the owners can make decisions. Most of the flood victims don’t have an idea of how they are going to pay for everything.”

A 30-day health window of opportunity following the flooding is quickly closing before serious mold issues arise. Johnson said the biggest needs for the area are prayer, cleaning supplies, gloves, sprayers, Clorox, gift cards and respirator masks. Any other kind of donations will get to the right person.

“Hundreds of people are choosing to be God’s hands and feet. I know Smithville Baptist Church has committed to help us, and all help is appreciated,” Johnson said. “God has been faithful. He’s provided over and over and over. People have heard the call and responded to help. That’s what has happened.”

“Because of the way Ole River Baptist Church and the Chambers County community donated so graciously to us after the storm, we wanted to open up this opportunity to our extended Monroe County community,” Stevens said.

Opportunities to donate funds or travel to Texas with relief teams aren’t limited to just members of Smithville Baptist Church but rather anyone inclined to do so.

“We’ll be carrying 10-person crews down over the next several weeks to handle clean-up/mud-out but would expect that to transition into basic construction support in the days to come. These will be involve four-day commitments with traveling down on Thursday evening, two full days of work on Friday and Saturday then traveling home on Sunday after church services for relief workers,” Stevens said. “We’re reaching across denomination lines with our area churches and offering this opportunity for them to donate and/or serve these folks since we’ve been down and established a relationship with solid and responsible faith community at Crestwood Baptist Church. We hope those in our county who were touched by the generosity of others will take this opportunity to either donate financially and/or participate in a two-day work crew. How awesome would it be to have a solid cross-section of Monroe County’s Christian faith community show up and work hand-in-hand together in this flood ravaged area? I can’t think of any better illustration of us being the hands and feet of Christ.”

According to Mike Bell, associate missions director of the Monroe County Baptist Association, men and women of faith who fill local churches every week are deeply moved when disasters occur.

“We want to help and we want that to be effective. In order to do that, our churches in the Monroe Baptist Association have joined together to prepare a long-term strategy to minister to those impacted by these storms. We are pooling our resources and assembling teams that can respond as specific requests come in,” Bell said.

The Monroe County Baptist Association, comprised of 37 southern Baptist churches, has begun putting volunteers from several churches together in teams to help in the wake of Hurricane Harvey. The goal is to have several teams from various churches who will help in the rebuilding phase of this work.

“Because so much of the damage was due to flooding, we will be helping with drywall, flooring, electrical and painting. Many of our teams have experience in these areas, but we will also be offering crash courses in teaching our volunteers how to do basic drywall installation and assist with other construction projects. We are in contact with ministries in the Houston and Beaumont areas and when they say come, we want to be ready.”

The primary focus for the county’s Baptist association is the relief effort in Texas, but if the opportunity arises, members will consider helping in Florida in the aftermath of Hurricane Irma.

“Our goal at this point is to assist families with the rebuilding process. We are aware that the majority of homeowners did not have flood insurance. Their homes have been badly damaged, their furniture is ruined and because they were unable to work, they have missed paychecks. That is why we will not only be sending teams of volunteers to help them rebuild, we will also be supplying building materials whenever possible,” Bell said.

Anyone who wants to volunteer or give toward the Monroe County Baptist Association’s effort can do so by contacting its office at 256-8778.