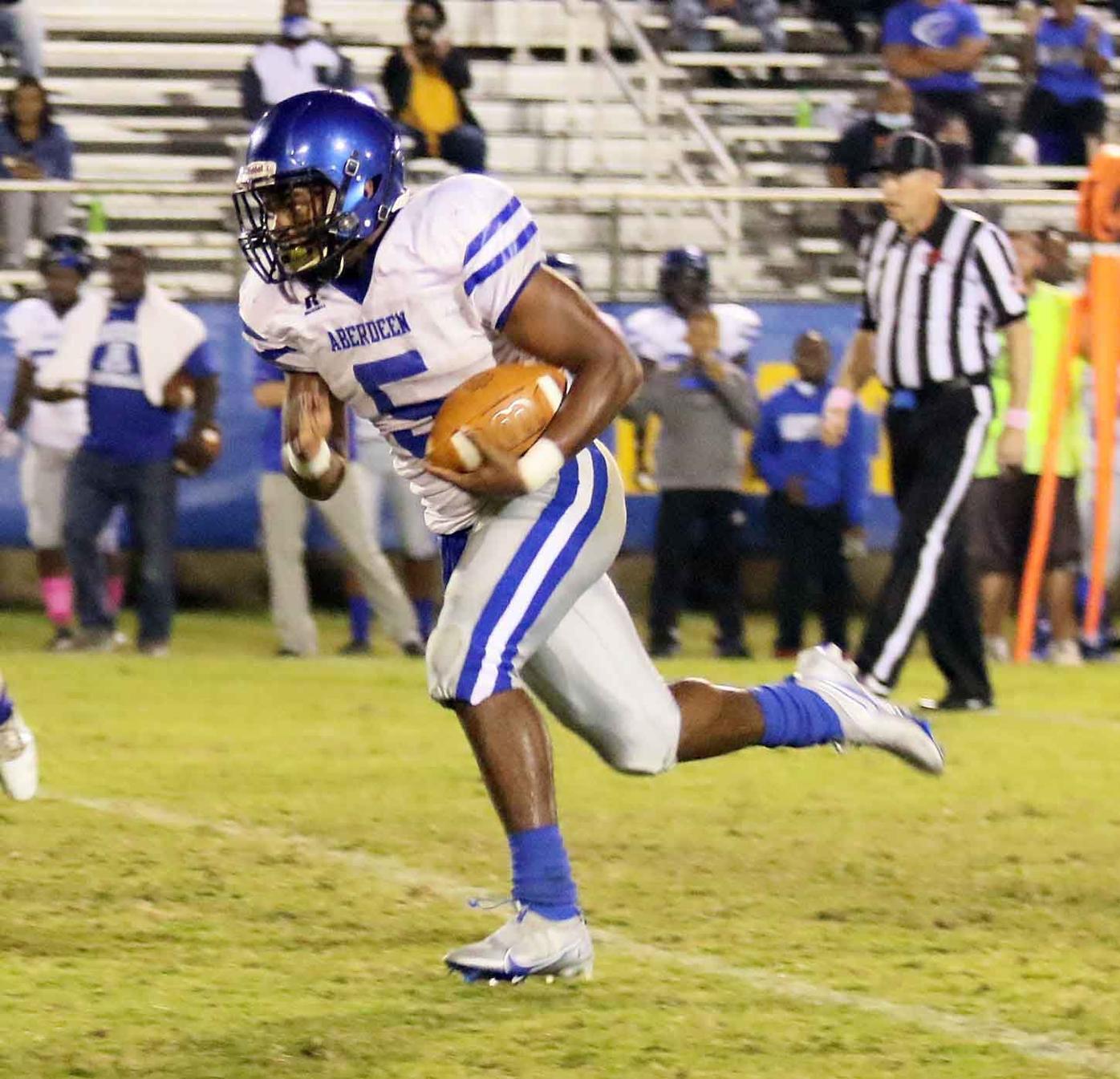 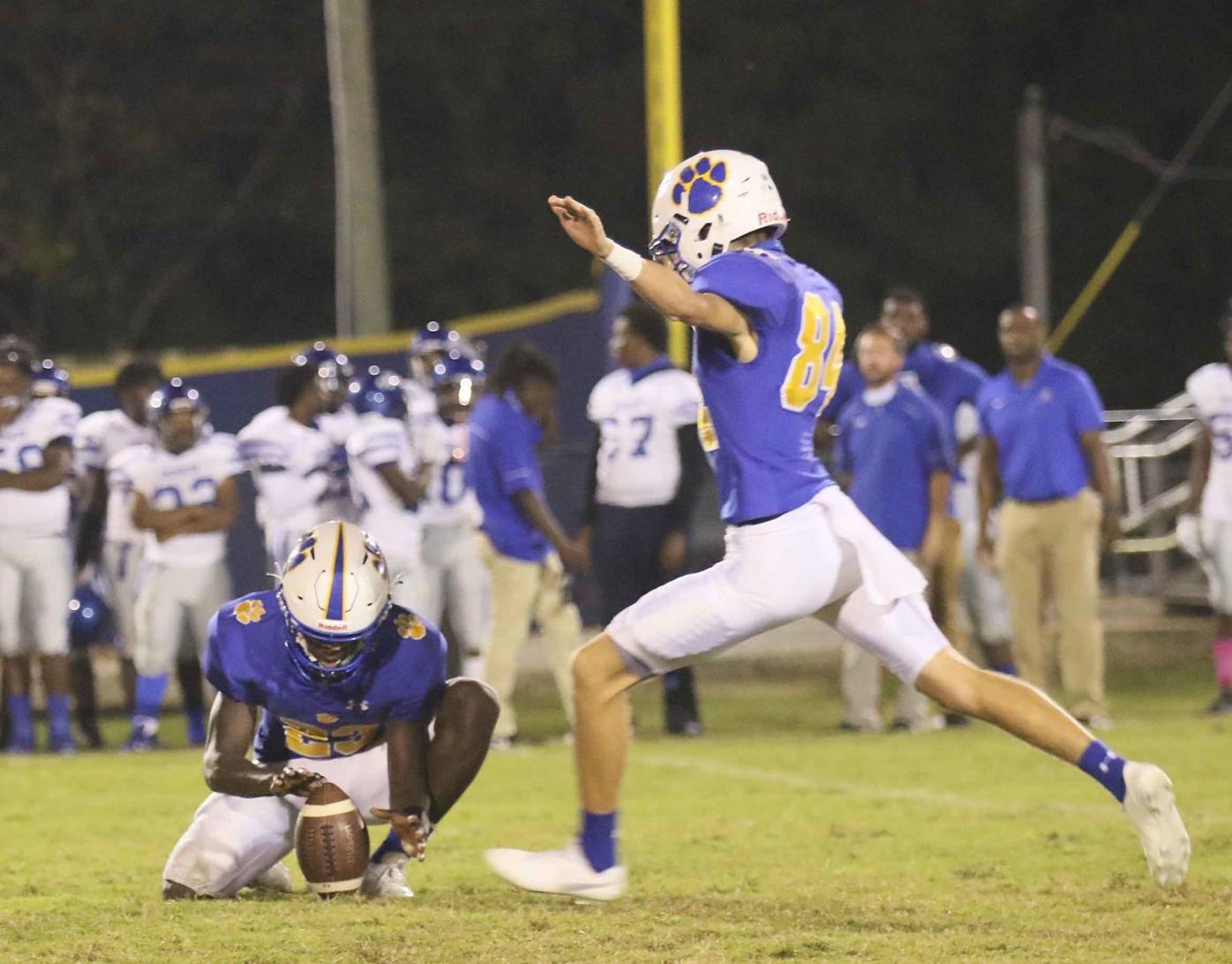 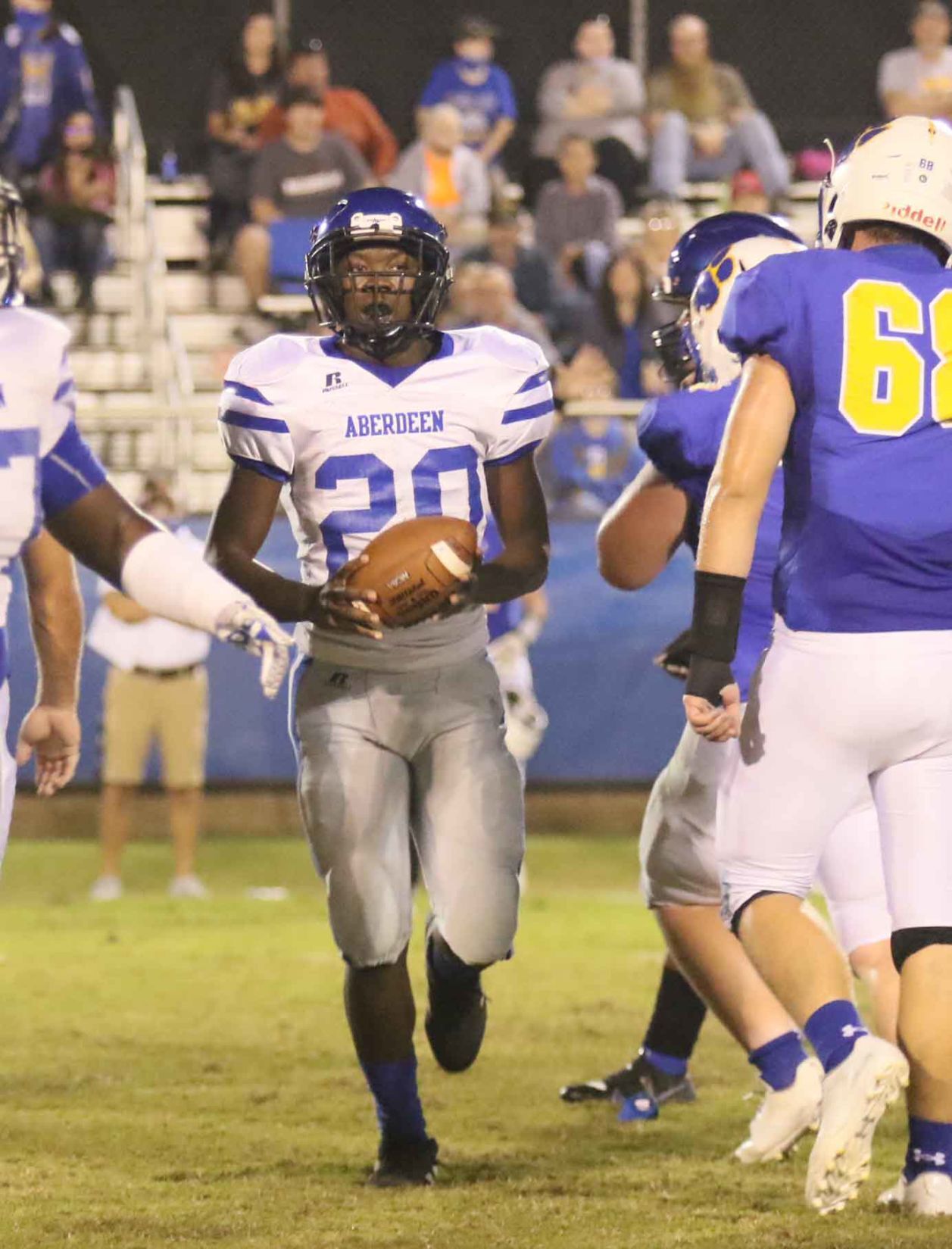 Aberdeen’s Kadarius Watkins had an interception and a fumble recovery against Hatley. 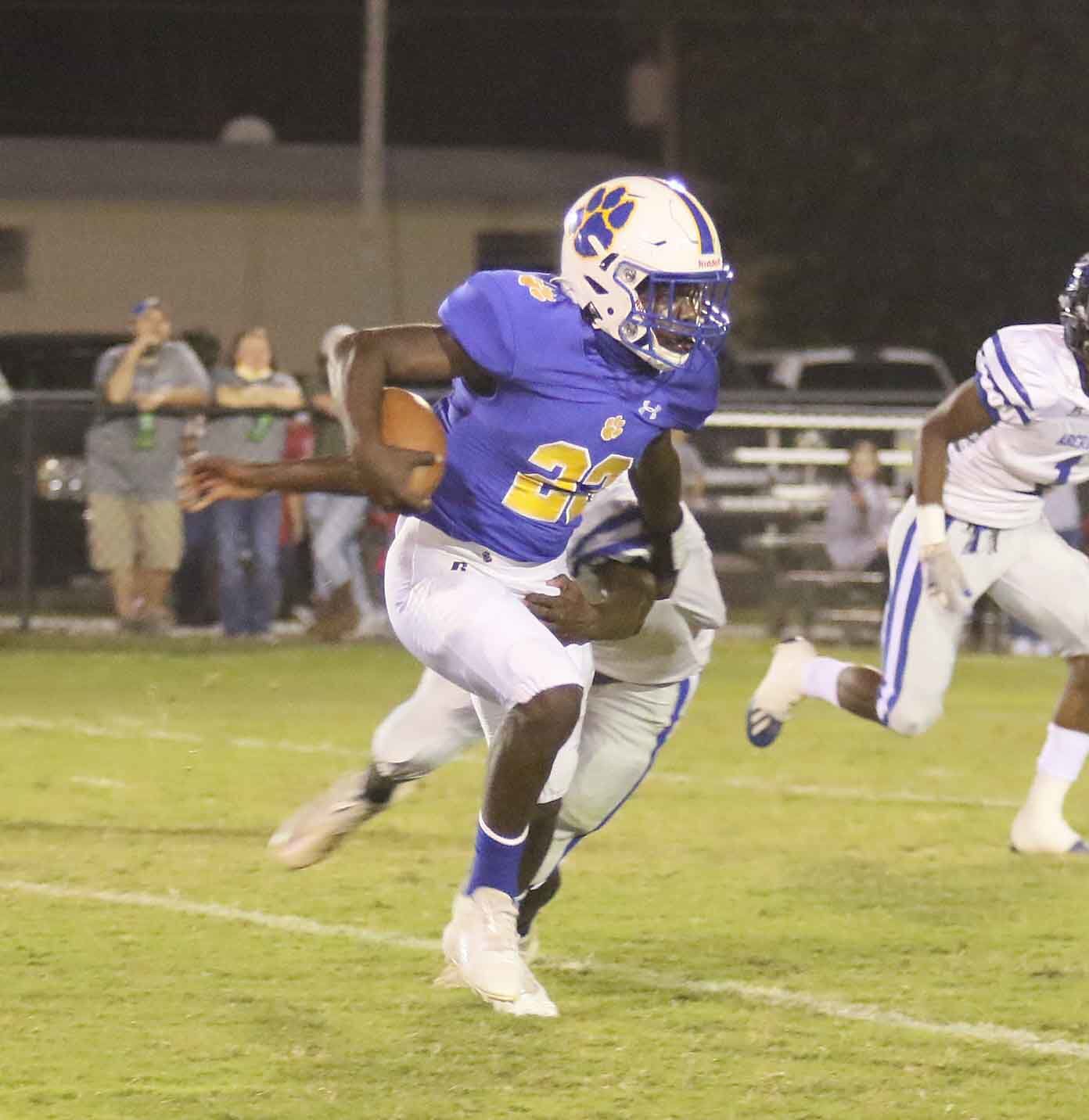 Hatley quarterback Markhel Hunt gets loose for his 29-yard touchdown in the first quarter. 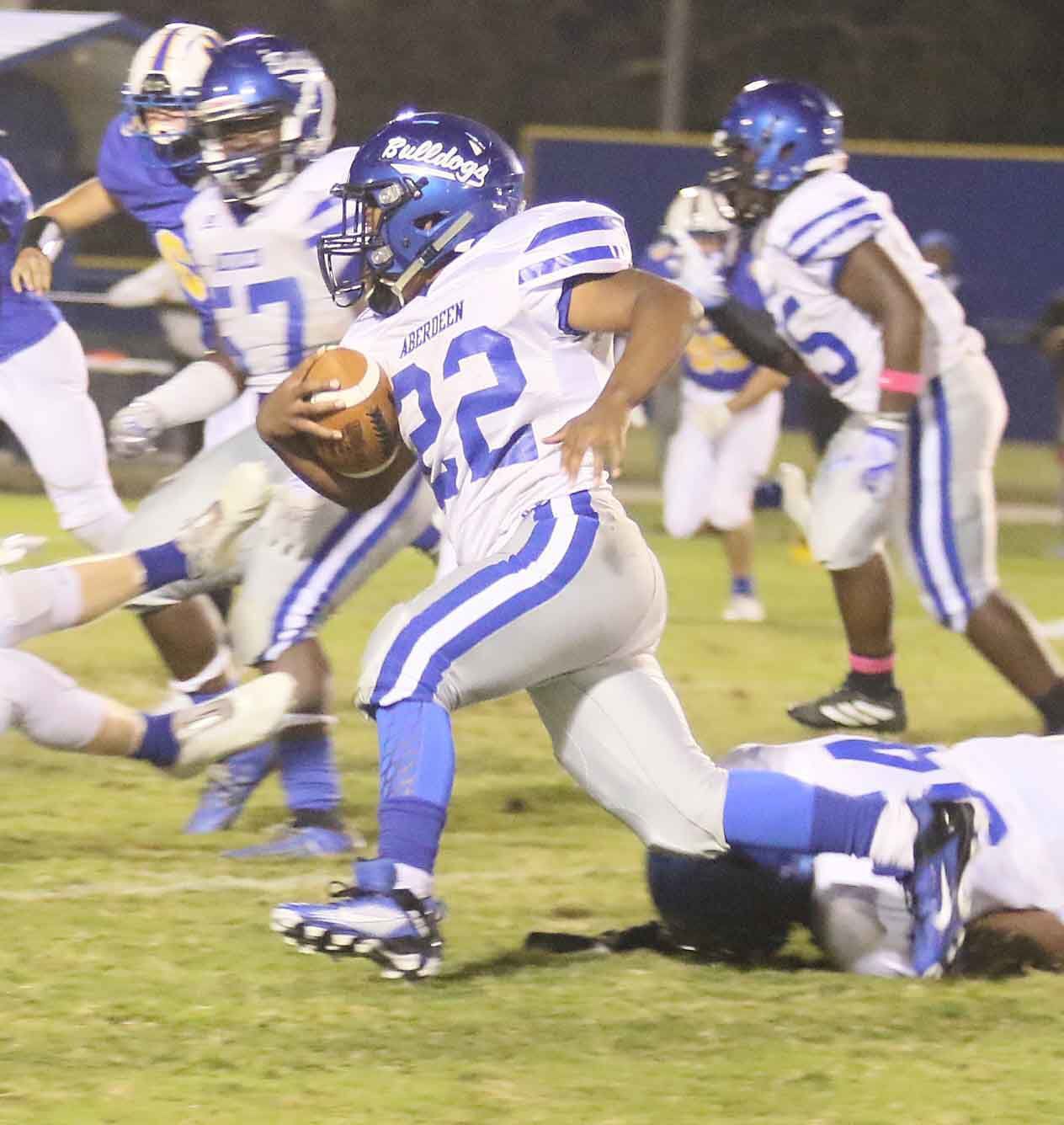 Aberdeen’s Xavier Young scored a touchdown in the second quarter. 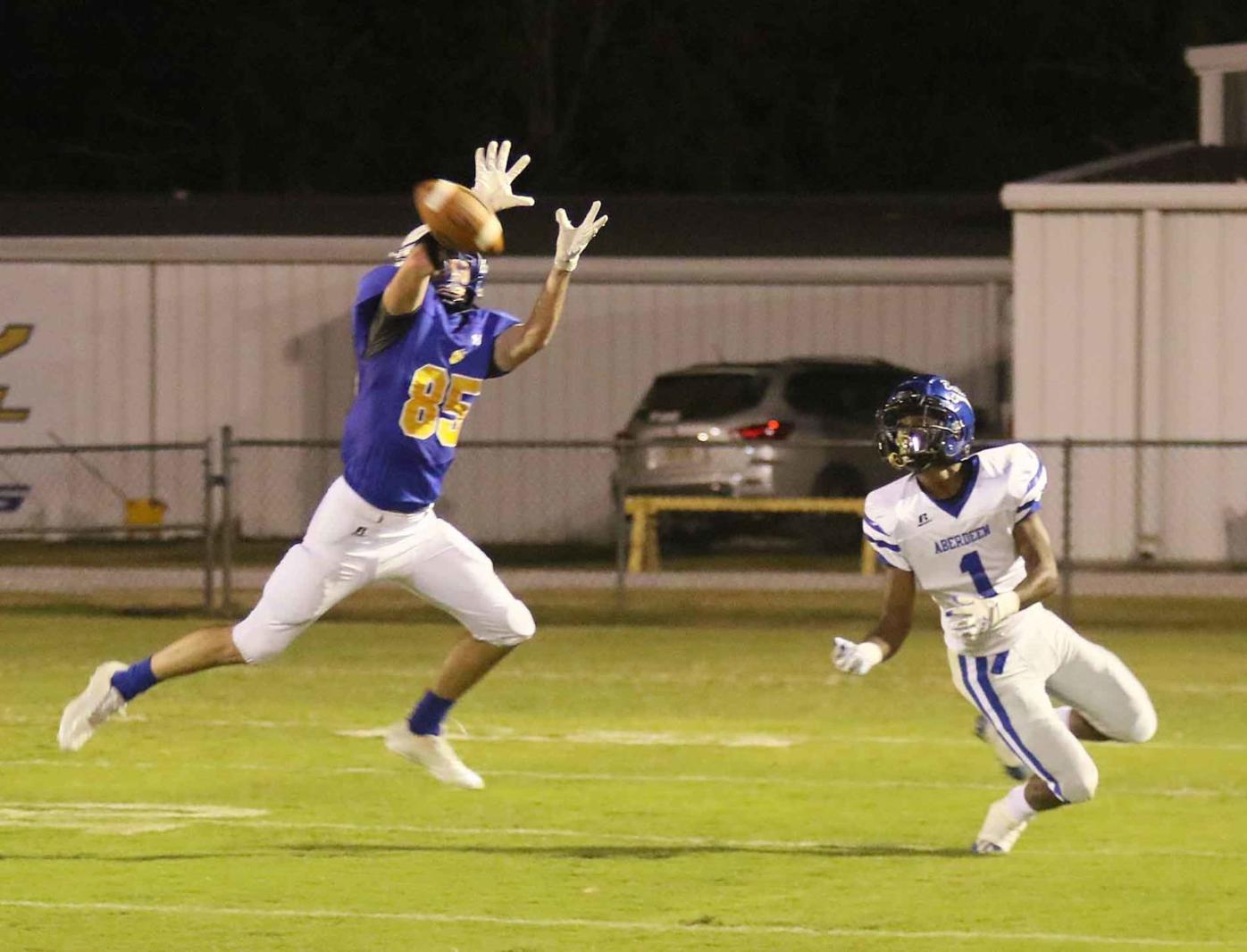 Hatley’s Jayden Green tries to get in front of a pass intended Aberdeen’s C.J. Arnold. 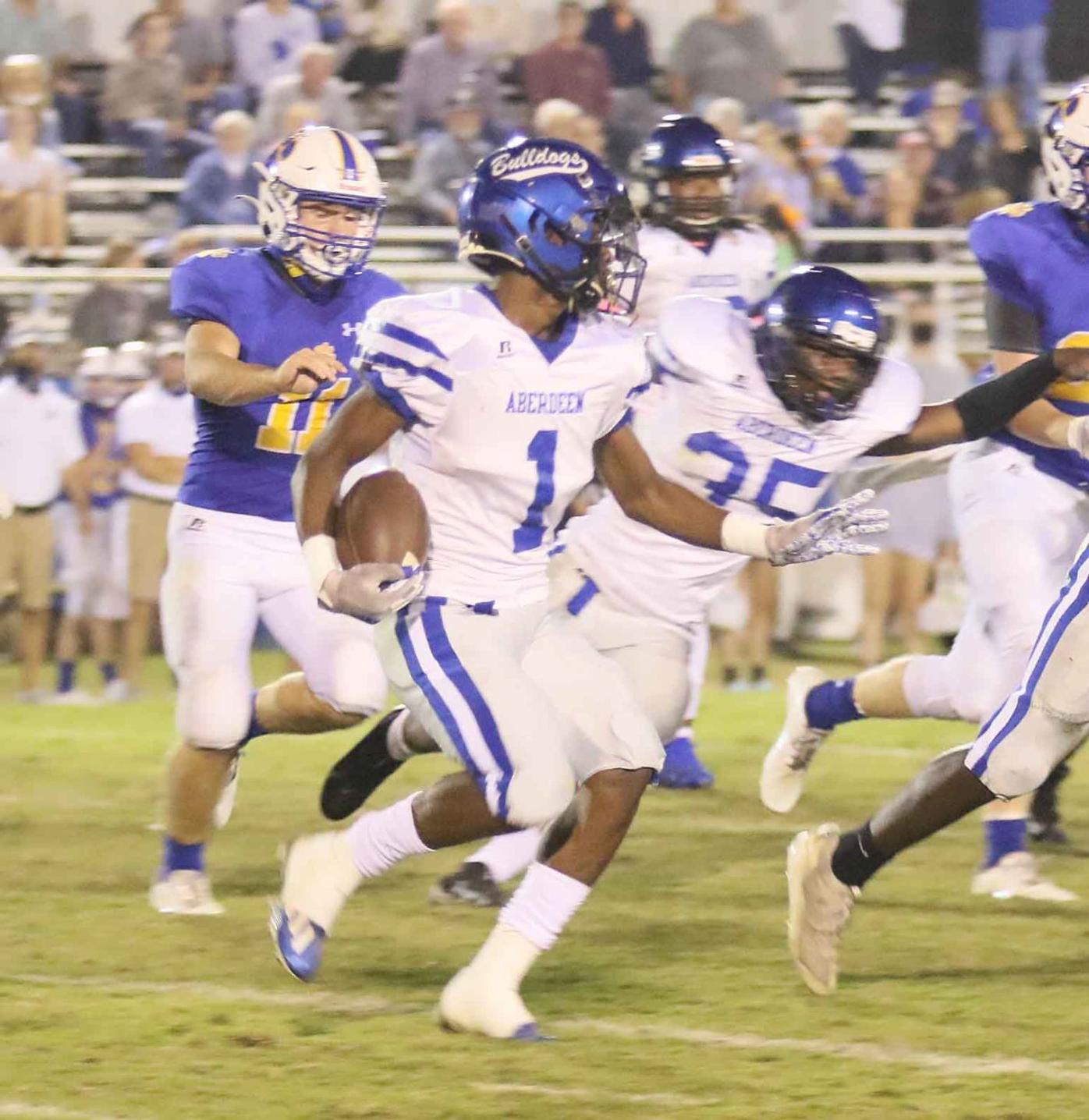 Aberdeen's C.J. Arnold picks up yards on a kickoff return.

Aberdeen’s Kadarius Watkins had an interception and a fumble recovery against Hatley.

Hatley quarterback Markhel Hunt gets loose for his 29-yard touchdown in the first quarter.

Aberdeen’s Xavier Young scored a touchdown in the second quarter.

Hatley’s Jayden Green tries to get in front of a pass intended Aberdeen’s C.J. Arnold.

Aberdeen's C.J. Arnold picks up yards on a kickoff return.

HATLEY – The Aberdeen Bulldogs got the monkey off their backs.

After not winning in 15 games, Aberdeen (1-5) came out in dominating fashion, rolling to a 47-16 Division 4-3A win over Hatley on Thursday night. It was the Bulldogs’ first win since their season opener against Okolona in 2019.

“It’s always big to get a win, and I’m definitely glad to be on the right side of that now,” Aberdeen coach Alex Williams said. “Hopefully this will be a stepping stone for us moving forward, and we would like to have some momentum for next week. That was our focus this entire time.”

The Bulldogs started off strong thanks to the run game of Johnathan Moore and quarterback Jermaine Strong and needed just four plays to get in the end zone on Moore’s 8-yard run. Demarcus Eubanks added the extra point to make it 7-0.

“It was huge for us to have a good start, and that’s the second week in a row to score on our first drive,” Williams said. “Hopefully we can keep that trend up, but it definitely set the tone for the rest of the game.”

Moore came through with the score on defense next, picking off Markhel Hunt on Hatley’s second play of their first drive and taking it to the house for the pick six.

The Tigers had more success on their second drive as a 45-yard pass from Hunt to Kade Starling and a roughing the passer call set them up inside Aberdeen territory. Hunt cut to the sideline for a 29-yard touchdown run to cut the lead to 13-7 after Luke Moffett’s extra point.

Penalties threatened Aberdeen’s next drive, but Moore found the open space, racing for a 50-yard touchdown for his third one of the night.

Kadarius Watkins recovered a Hatley fumble two plays later to set the Bulldogs up again, and Strong found the end zone on a 12-yard keeper to go up 26-7.

A few Aberdeen penalties pushed the Tigers into Bulldog territory, and while their drive stalled, Moffett started out his big night by hitting a 45-yard field goal.

Hatley’s momentum was short-lived as Aberdeen answered with two more touchdowns before the half with Xavier Young finishing off a long drie with a 12-yard scoring run and Moore adding his second pick six of the night.

“I’ve been really studying on defense this year,” Moore said. “I really couldn’t worry about offense tonight because I had to get on my defensive level because I haven’t been playing well on defense lately. Offense, I know what I can do on that, but when I get ready to show my game on defense, then you see what I can do. It’s great to win, but this should be a good start for us to keep on after this.”

Aberdeen’s defense finished off the first half with a sack by Wyza Randle and an interception from Watkins that ended the second quarter.

“Everything is starting to finally come together for the defense, and the guys are starting to do what we ask them to do with two pick sixes,” Williams said. “When they play hard, it just prepares us to be much better. The offense feeds off it because we know we can get the ball back, and we know they will get stops when they need to. We held them to field goals tonight, and they have a really good field goal kicker.”

The Tigers opened the third quarter with the ball, but a bad snap led to a quick punt. Young, Strong and JaNolan Jones ate up the groundwork on the ensuing drive, and C.J. Arnold came in at quarterback and scored on a 1-yard keeper for the Bulldogs’ final score.

‘Luke is a weapon’

Hatley started to find some success on the ground, which led to two more huge field goals from Moffett – a 32-yarder with 6:54 to go and a 48-yarder with 2:06 left in the game after Jacob Mobley recovered an Aberdeen fumble.

“Luke is a weapon. He does a really good job for us and hadn’t even gotten a chance to kick many field goals this year,” Hatley coach Clint Adair said. “Any time we have gotten in range, we have ended up scoring or something else happened to back us up. I was proud of him tonight to actually get a chance and for him to show everybody what he can do.”

Moore finished with seven carries for 136 yards in just the first half of play, while Strong added 105 rushing yards and Young another 57 yards on the ground.