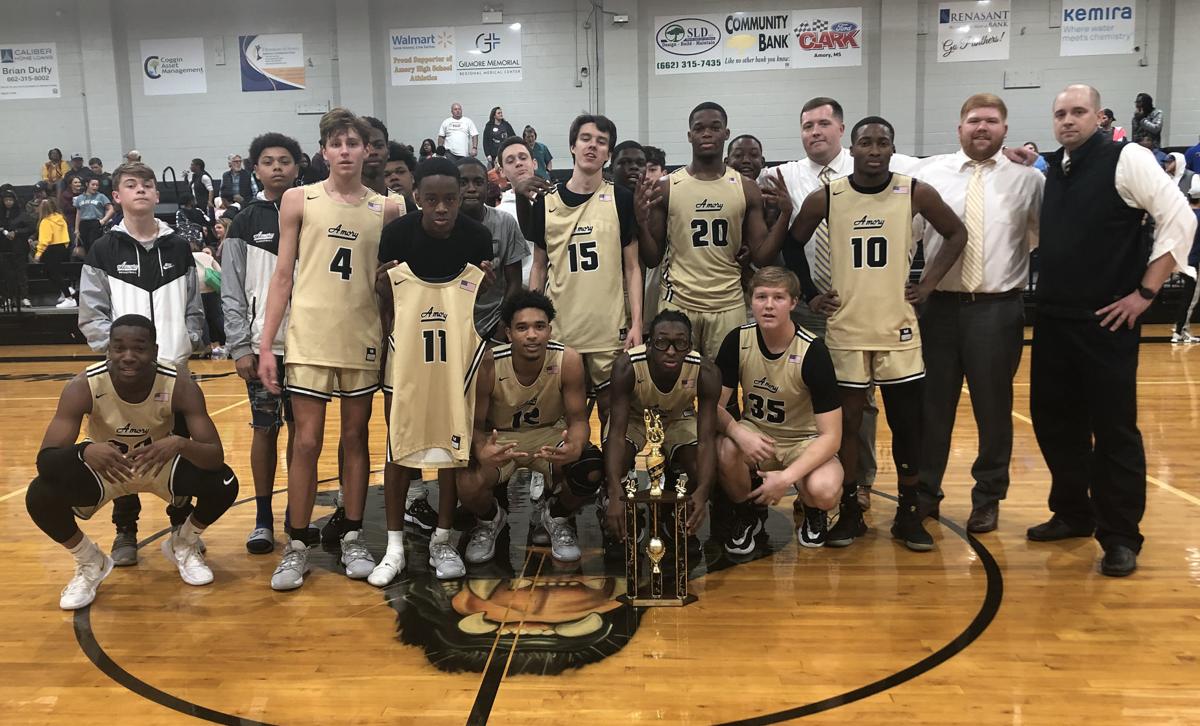 The Amory Panthers pose with their championship trophy after their 61-57 win over Smithville in the boys’ championship. 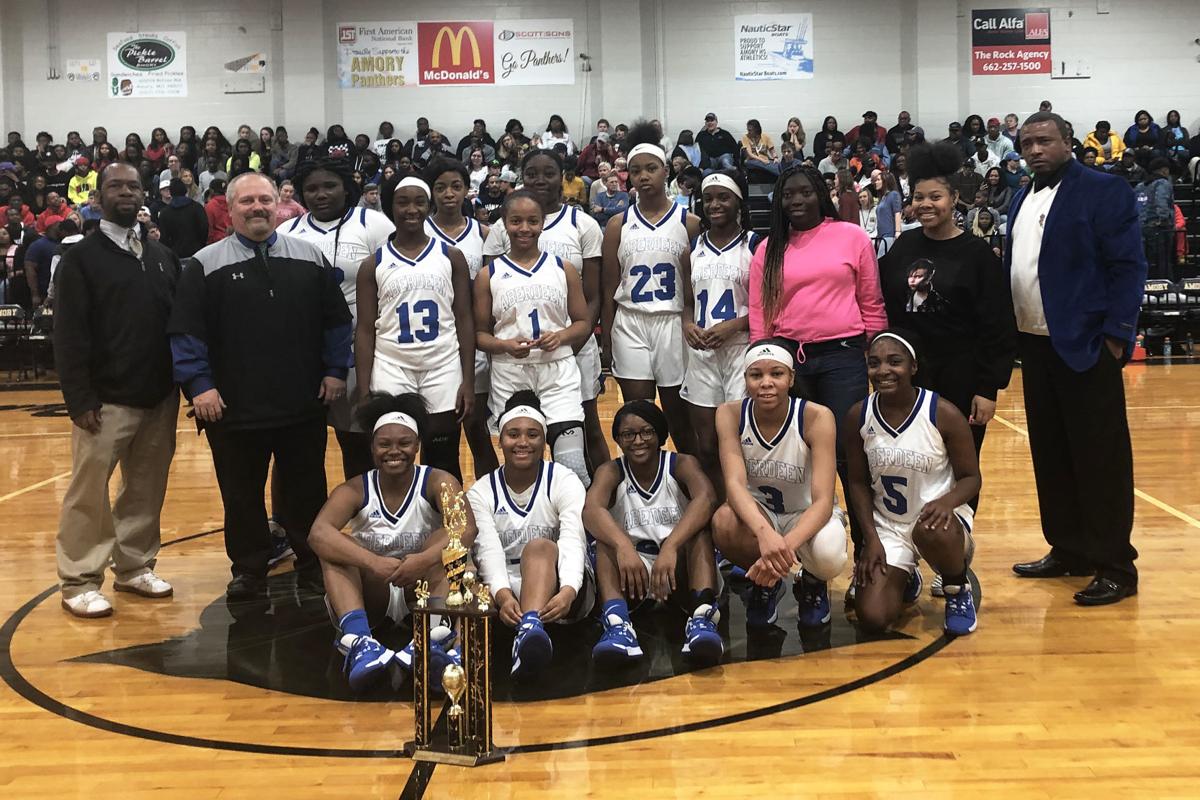 The Aberdeen Lady Bulldogs pose with their trophy after defeating Amory 48-43 in the girls’ championship. 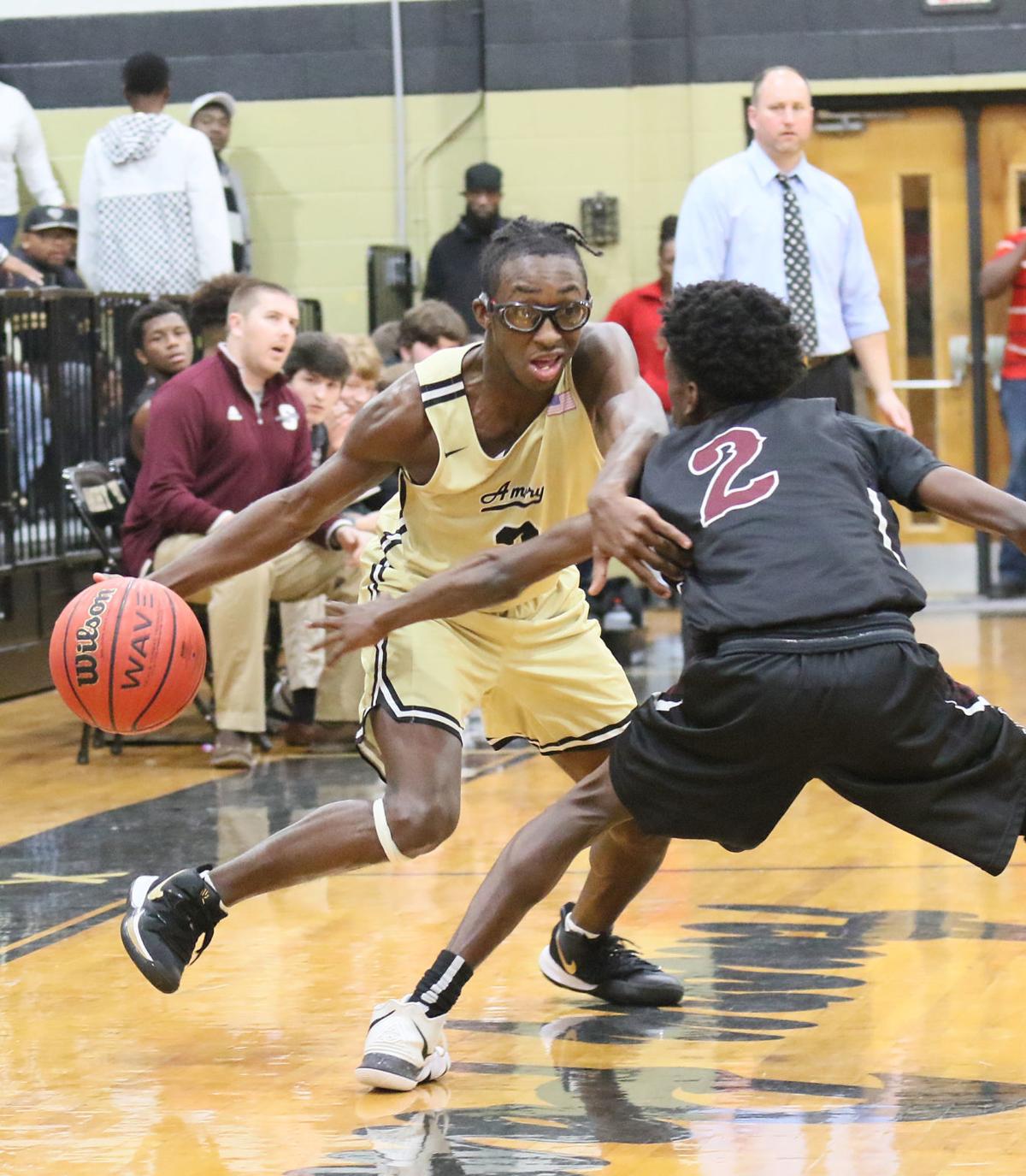 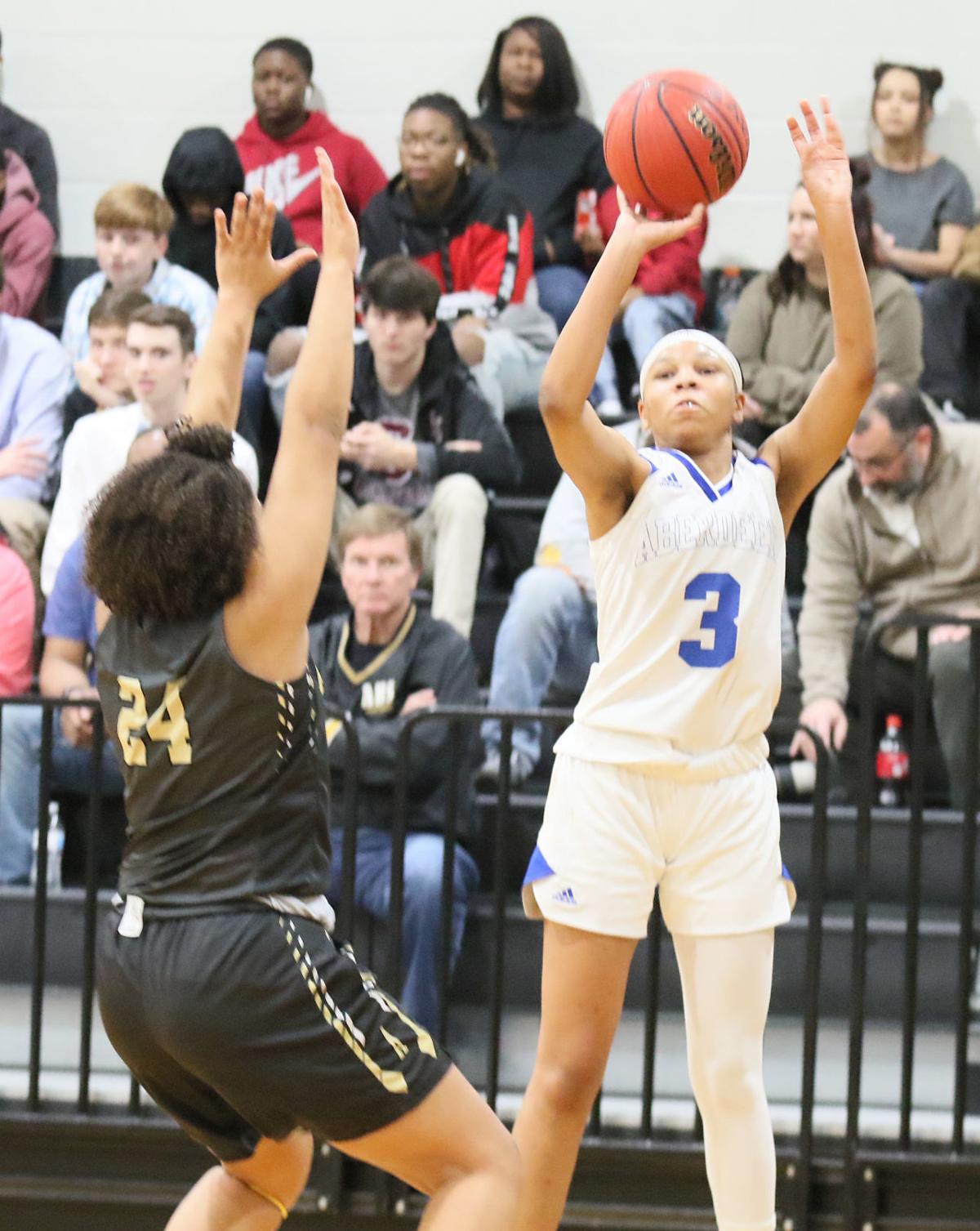 Aberdeen’s Jamiyah Hoskins finished as the Lady Bulldogs’ leading scorer in all three wins in the tournament. 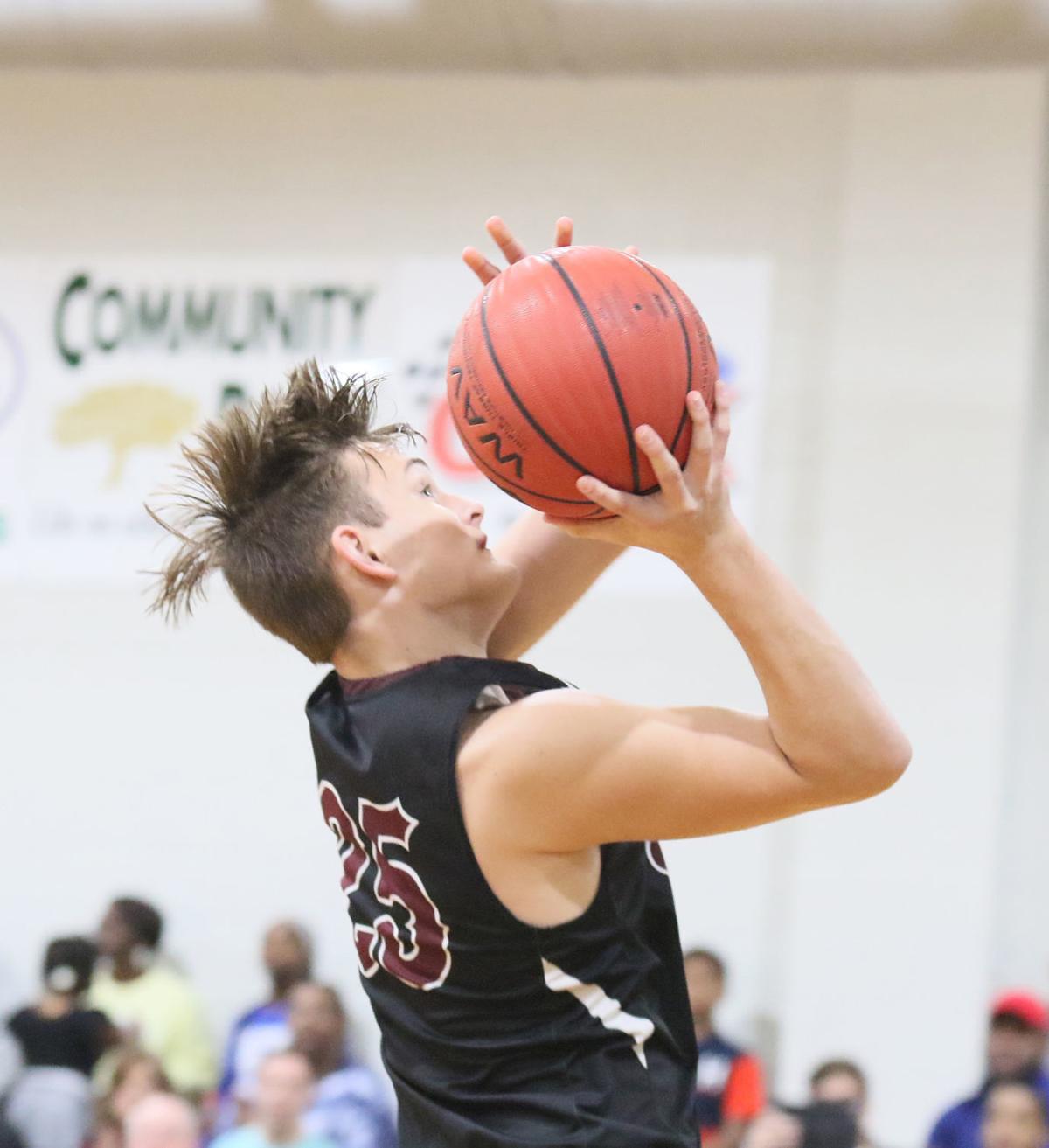 Smithville’s Chandler Woodham scored the first six points of the game and finished with 15 in the championship against Amory. 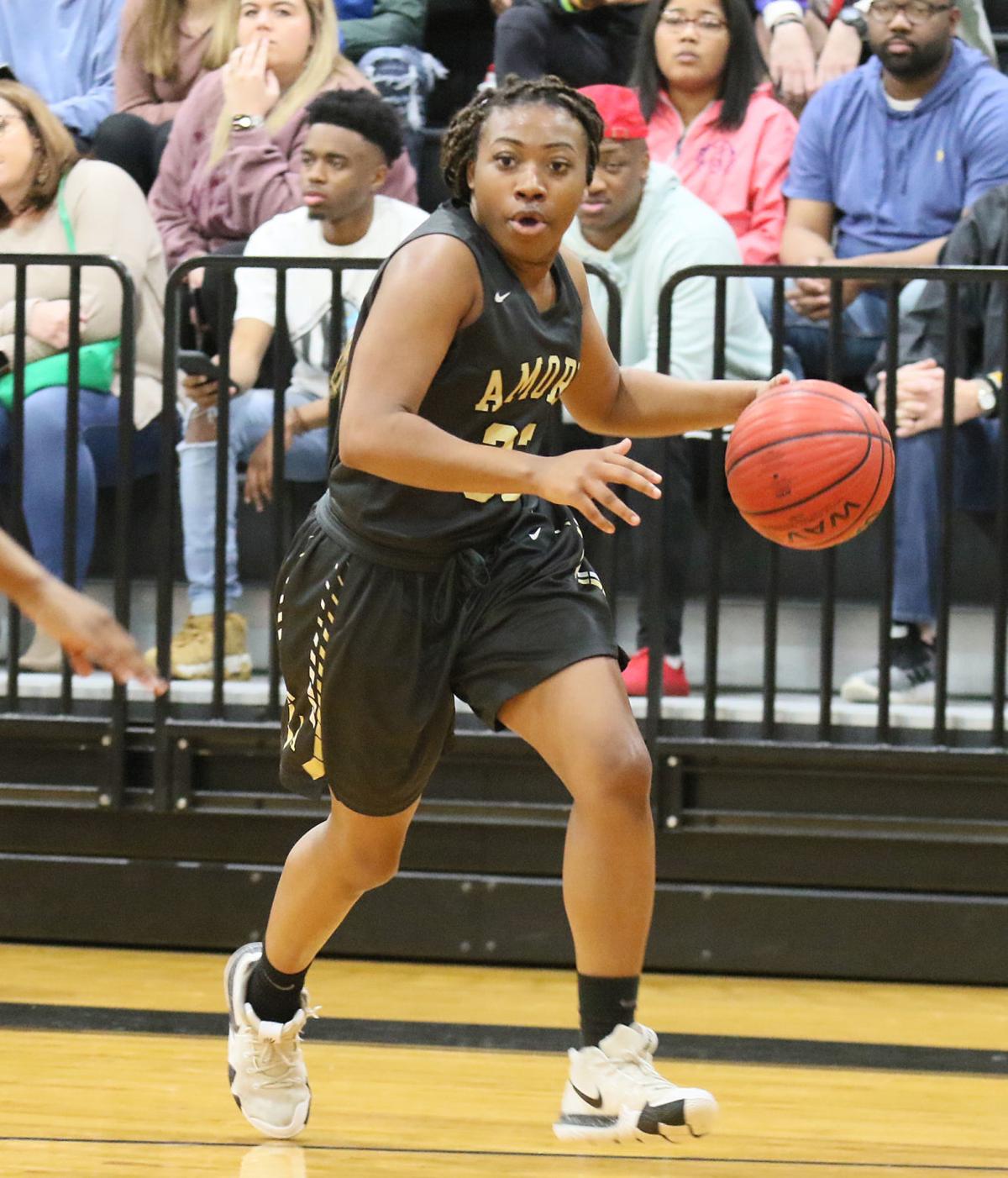 Amory’s Kimiya Parks paced all scorers with 11 points in the championship game. 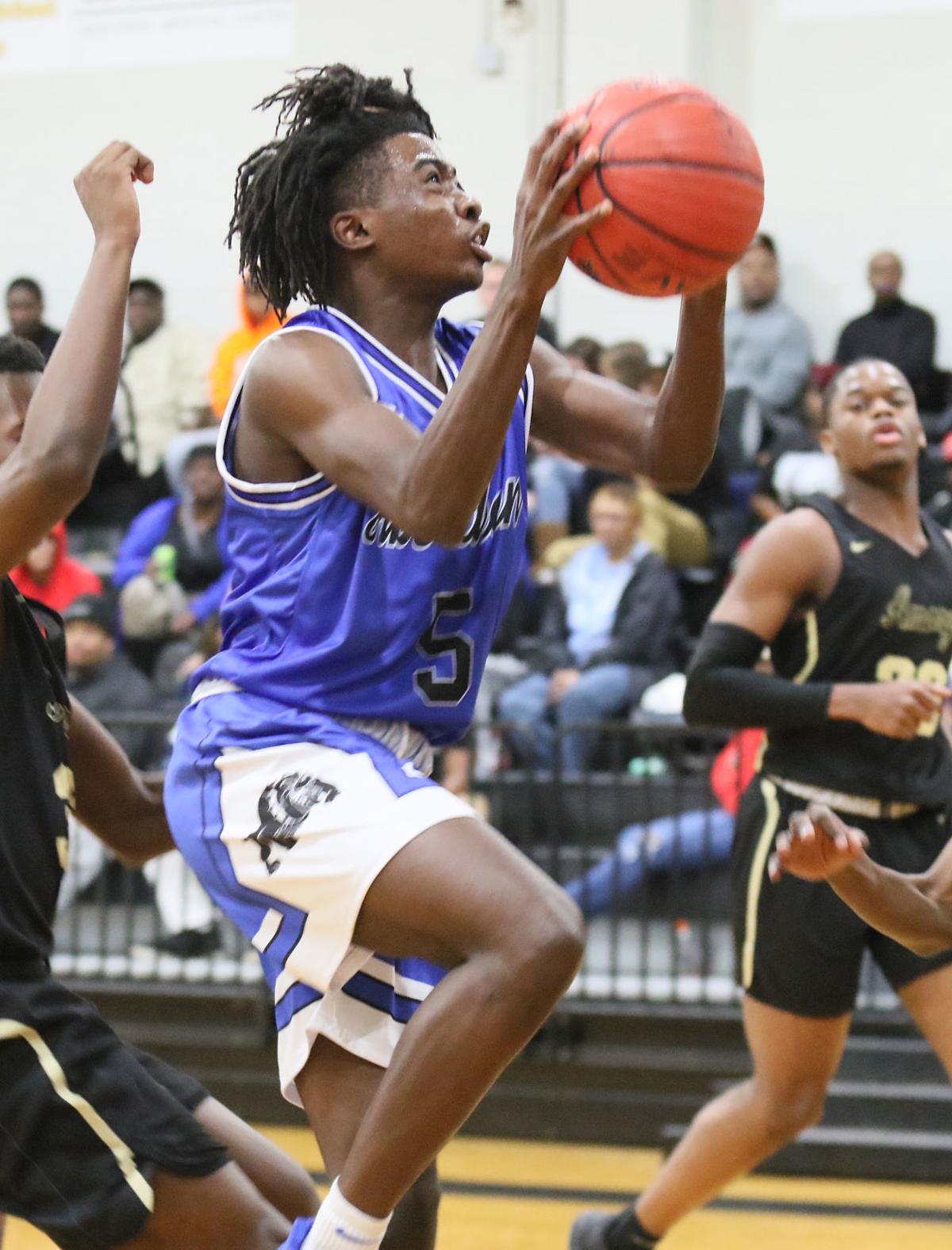 Aberdeen’s Javian McMillian drives to the basket against Amory. 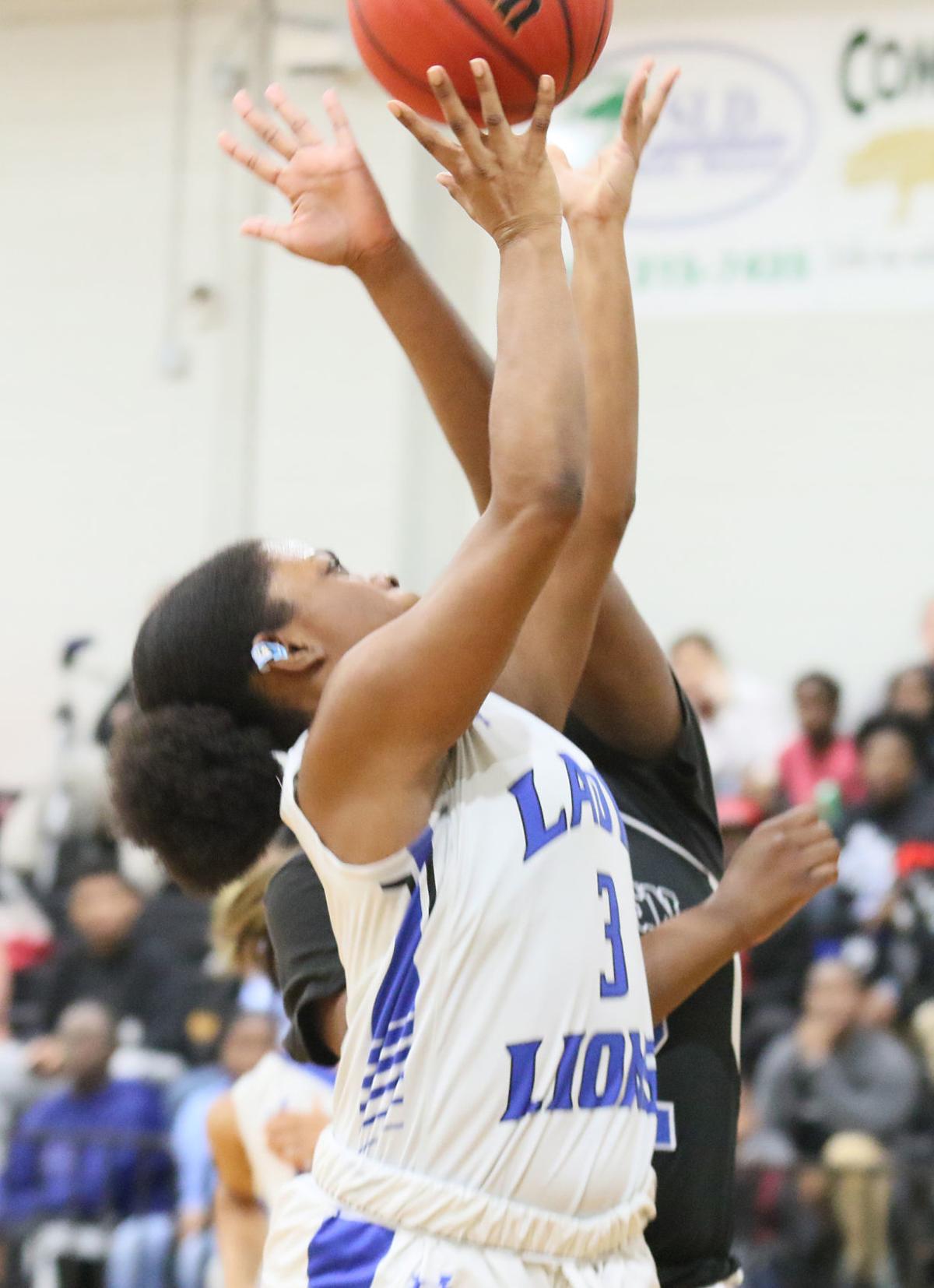 Hamilton’s Alexia Ware puts up a basket against Aberdeen on Friday. 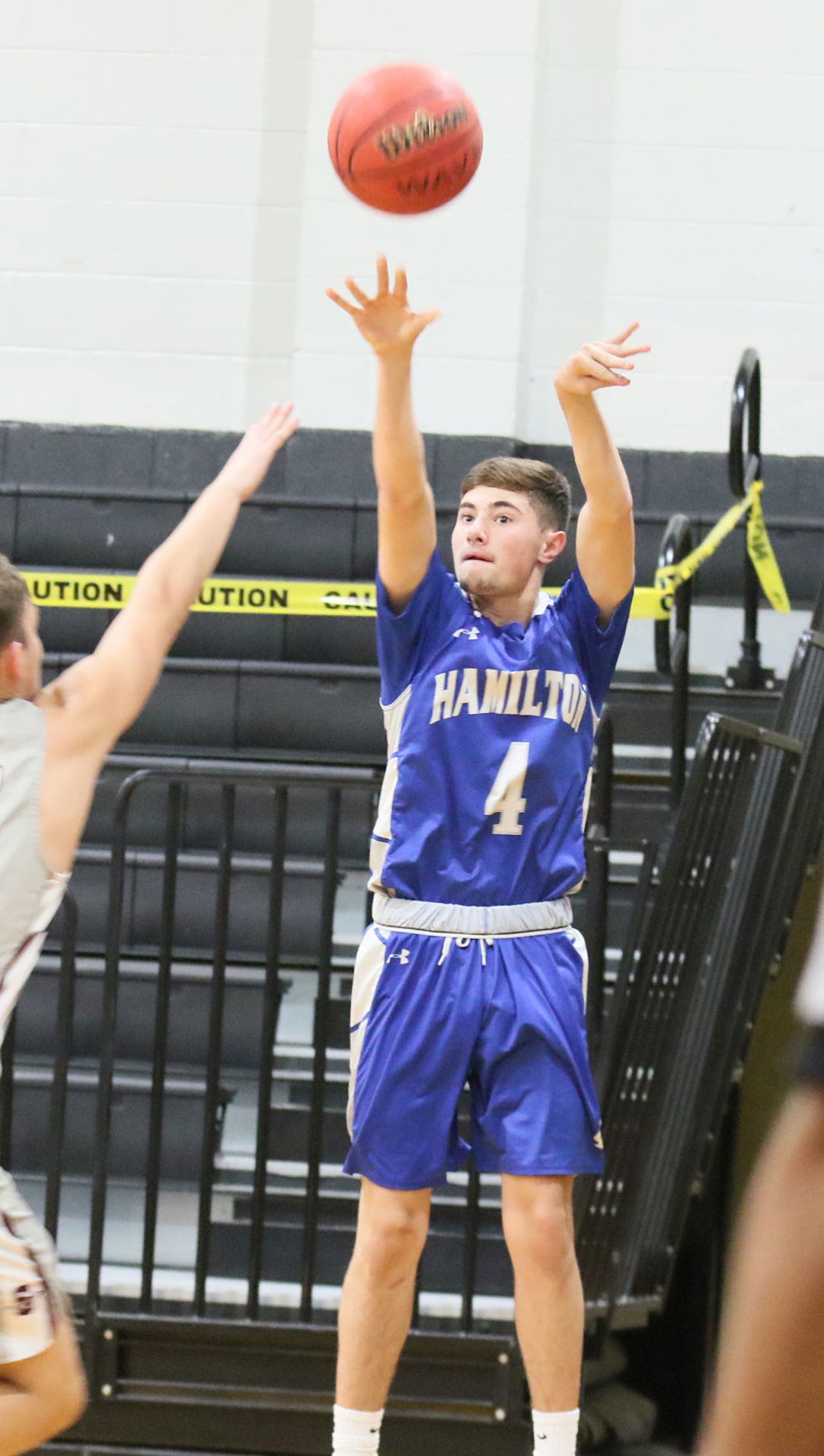 Hamilton’s Collin Holman puts up a three-pointer against Smithville on Friday. 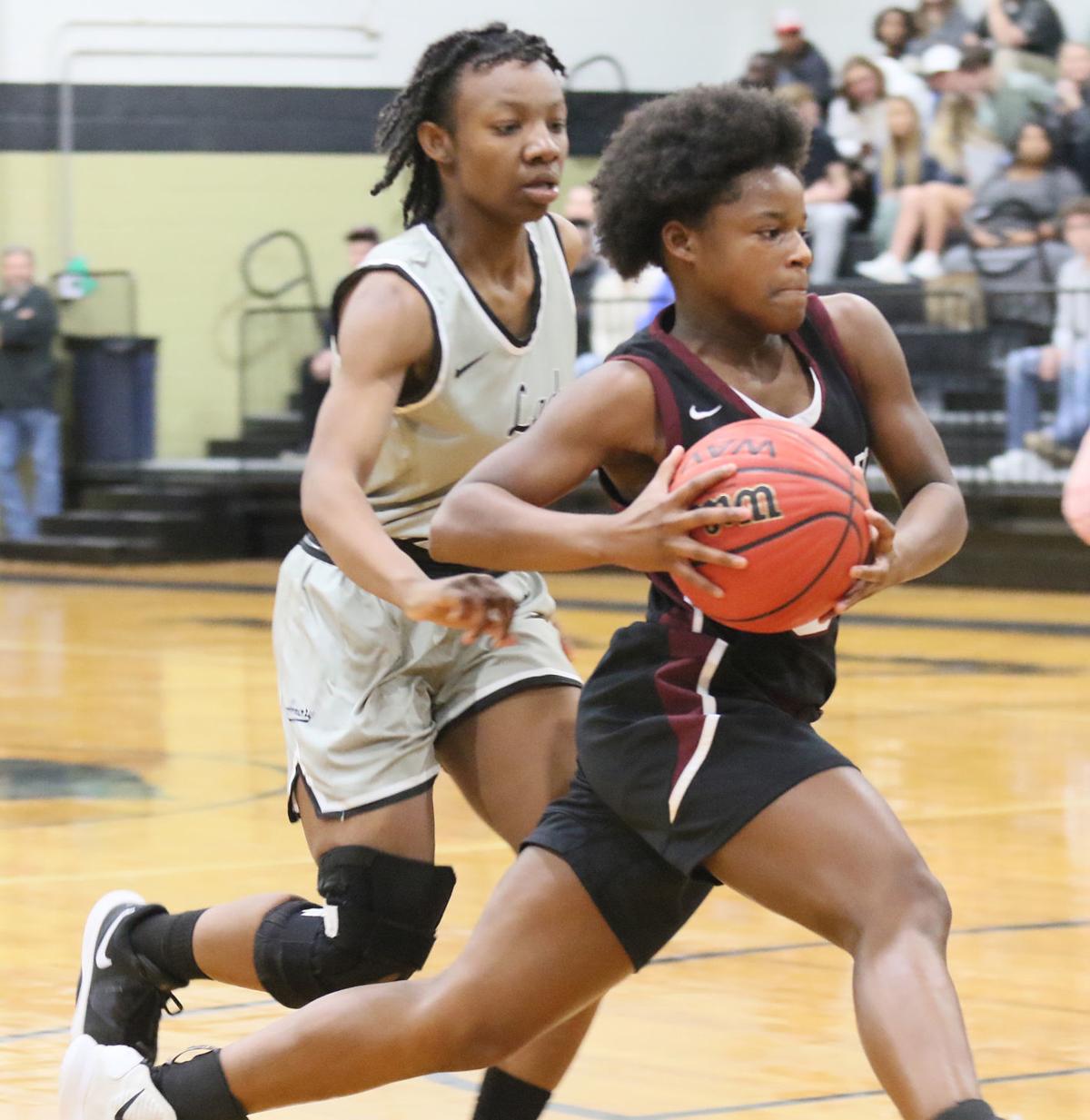 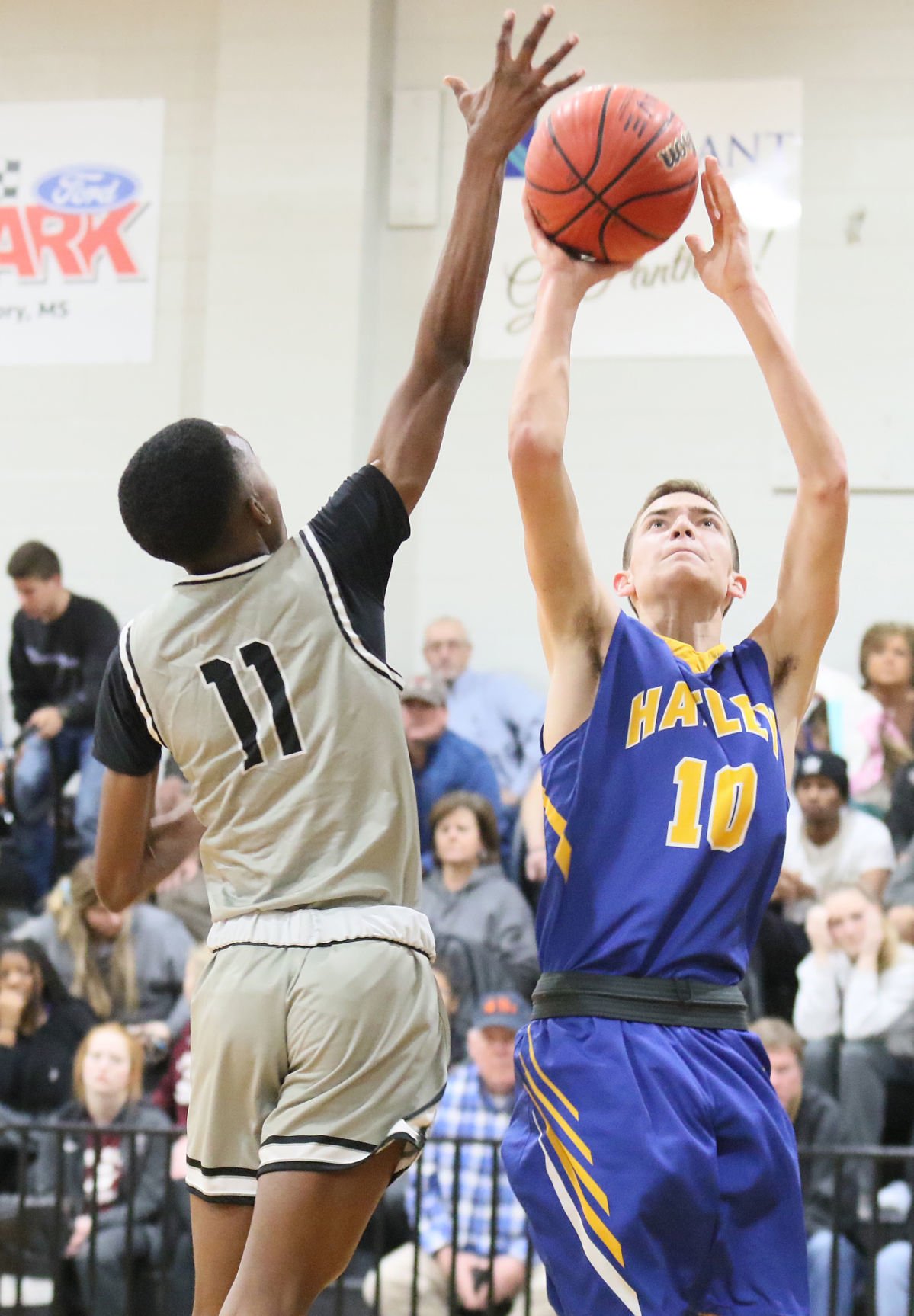 Hatley’s Luke Moffett led all scorers with his 20 points against Amory on Thursday. 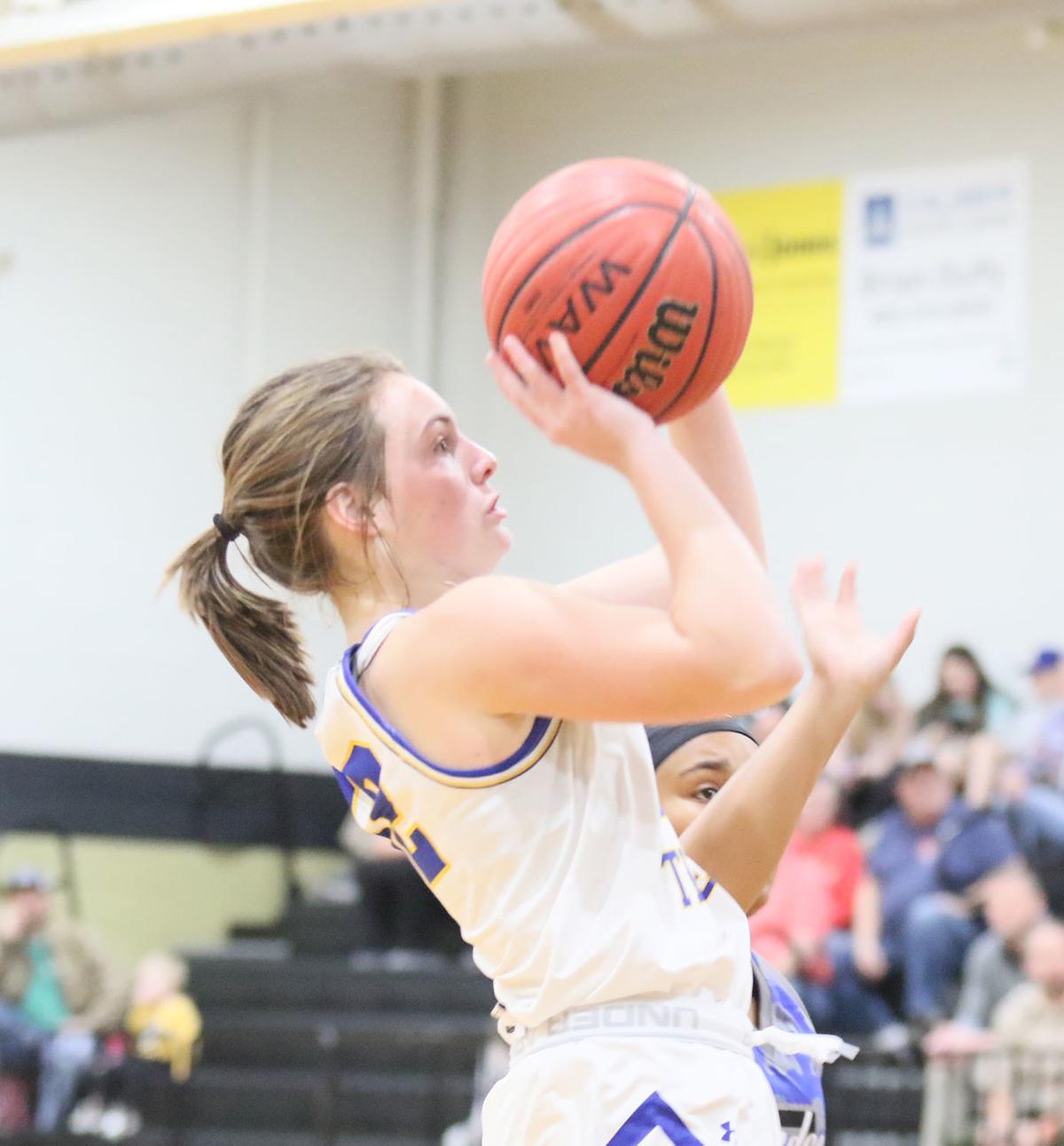 Hatley’s Kenlee Wilkinson puts up a jump shot against Aberdeen on Thursday.

The Amory Panthers pose with their championship trophy after their 61-57 win over Smithville in the boys’ championship.

The Aberdeen Lady Bulldogs pose with their trophy after defeating Amory 48-43 in the girls’ championship.

Aberdeen’s Jamiyah Hoskins finished as the Lady Bulldogs’ leading scorer in all three wins in the tournament.

Smithville’s Chandler Woodham scored the first six points of the game and finished with 15 in the championship against Amory.

Amory’s Kimiya Parks paced all scorers with 11 points in the championship game.

Aberdeen’s Javian McMillian drives to the basket against Amory.

Hamilton’s Alexia Ware puts up a basket against Aberdeen on Friday.

Hamilton’s Collin Holman puts up a three-pointer against Smithville on Friday.

Hatley’s Luke Moffett led all scorers with his 20 points against Amory on Thursday.

Hatley’s Kenlee Wilkinson puts up a jump shot against Aberdeen on Thursday.

AMORY – Late comebacks were the story on Saturday night as the Amory Panthers and the Aberdeen Lady Bulldogs each rallied in the fourth quarter to take home Monroe County Tournament championships.

The Amory Panthers overcame a slow start in both the first and second halves on the way to their comeback in grabbing the boys’ championship.

“I have never seen a group show more fight in one game than that one right there,” Amory coach Brian Pearson said. “To overcome two huge deficits, and first of all, it’s a huge credit to Smithville and what Coach (Nick) Coln and them do. Those guys stepped up, made shots and gave us everything that we wanted. I don’t know where we dug down and found it, but I’m so proud of these guys and they earned it.”

Smithville started the game on an 8-0 run with the first six points coming from Chandler Woodham before Isaiah Thompson hit a three and ended the drought for Amory with 5:32 left in the first quarter. He hit another trey a few seconds later to cut it to 11-6, but Woodham, Blake Williams, Khirei Standifer and Mason Blair helped open the advantage to 21-11 for the Noles at the end of the quarter.

Jamerison Martin scored the first points of the second at the free-throw line, but Smithville went on a 7-0 run to extend the lead to 28-13. The Panthers had their first big run to end the quarter, a 15-0 one to tie the game at 28-28 at the half. Charleston Wallace hit a three during the run, while Martin and Drew Keeton chipped in four points each.

Woodham put the Noles back on top to open the second half, and Brian Coxey got going from three-point range with three big shots to get the lead out to 39-30. Martin put in a pair of three-point plays to cut into it twice, but Smithville held a double-digit advantage twice after threes from Coxey and Blair. Keeton ended the third with a trey of his own to cut it to 51-43 going into the final quarter.

The Panthers started the fourth with a 7-0 run with Martin, Gray Thornton and James Spratt all going perfect at the line to tie the game once again. Woodham answered with a layup to put the Noles up 53-51 with 6:51 to go, but Martin answered him once again. Blair sank a three for Smithville’s last lead, as Thompson scored the next six points to give the Panthers the lead for good with 1:40 to go.

Woodham hit one from the line to cut it to 59-57, but Thornton sealed the deal with two free throws of his own with 12 seconds to go.

“I think you could look at anyone for us tonight,” Pearson said. “Jamerison hit some big shots. Isaiah hit some big buckets late, and Gray made some key free throws. It was a defensive end though, and we guarded them man to man when we had to and got stops.”

Martin led all scorers with 21 points, while Thompson added another 14 points. Woodham finished with 15 points for Smithville, followed by Coxey’s 14 and Blair’s 12 points.

The Lady Bulldogs overcame a six-point deficit at the beginning of the fourth quarter to come away with the girls’ championship.

“We had a lot of girls who stepped up this whole week and played real hard, played great basketball,” Aberdeen coach Lorenzo Conley said. “Like I told them, you’re going to have opportunities to make big plays at the end, and they did. It was some girls with some big time moments tonight.”

It was a back-and-forth first quarter that featured three-pointers from Amory’s Emma Kate Wright and Aberdeen’s Paige Matthews and Jamiyah Hoskins. Amory led by as many as five, but Miyunia Thomas put in an easy basket to tie it at 14-14 at the end of the first.

Kimiya Parks and Amaya Trimble put Amory back on top early in the second before Jamia Johnson was able to answer for Aberdeen. Back-to-back baskets by Thomas and Tyquasia McMillian gave the Lady Bulldogs a 20-18 lead that Parks cut to one with her free throw to end the first half.

Jatavia Smith and Parks scored the first four points of the third quarter, and Smith drained a three a few seconds later for a 26-21 Amory lead. Makayla Davis scored on three-straight trips down the floor, and Matthews followed her with a layup for Aberdeen to go up 30-28 midway through the period.

A putback from Jhalia Small and a three by Laney Howell retook the lead for the Lady Panthers, who were up 37-35 going into the fourth.

Howell hit a three and drew the foul, making it a four-point play to open the fourth with a 41-35 Amory lead. Aberdeen scored the next eight points with Hoskins putting them on top with 3:07 to go. Small tied the game again, but Thomas answered her to regain the lead for good for Aberdeen. Tamia Walker, Hoskins and Kierstyn Riddle sealed the win with four late free throws.

“They all came up big tonight,” Conley said. “Tamia Walker and Jamiyah Hoskins have been carrying us, and my bigs did an awesome job against No. 24 (Jhalia Small) tonight. We had worked on that today, running the post. She’s pretty good. We have talked about our defense all year, that we’re not going to score much, so we have to lock down. We’re just excited about a great team win and getting an opportunity to come in and get one on their home court. These girls have worked hard, and they really deserved it.”

The Lady Bulldogs didn’t have any double-digit scorers, but Hoskins led with nine points, while Davis and Thomas added eight each. Parks was the game’s leading scorer with 11 points for Amory.

Jamerison Martin poured in a career-high 40 points, including five three-pointers, in the nightcap of the tournament on Thursday night. Isaiah Thompson added another 16 points, while Charleston Wallace chipped in 10 for the Panthers, who advanced to the championship. Tae Johnson led Aberdeen with 14 points in the loss, followed by Malik Williams with 12 points.

Jamiyah Hoskins led the Lady Bulldogs with 15 points in the win that advanced them to the championship. Tori Harrison paced Hamilton with 12 points, while Alexia Ware added eight points.

Smithville rolled after a 48-10 halftime advantage on the way to a season-sweep of Hamilton. Mason Blair poured in 18 points to lead all scorers, while Blake Williams added 10 points. Hamilton’s Zach Crawford and Drenon Benson tied as the Lions’ leading scorers with 5 points each.

Amory led 13-4 at the end of the first quarter and 23-17 at the half, but a 7-0 Smithville run from Orlandria Smith and Chloe Summerford put the Lady Noles ahead 34-33 at the end of the third. The Lady Panthers pushed back ahead by five midway through the fourth before Kylie Faulkner tied the game with a three-point play and forced overtime.

In overtime, Jhalia Small and Amaya Trimble opened the period with back-to-back baskets for all the advantage that the Lady Panthers would need as they held Smithville to just a pair of free throws from Smith.

(B) Amory 60, Hatley 46: Amory turned a 22-13 lead at the end of the first into double digits at 31-20 at the half, thanks to four late points from Isaiah Thompson and Charleston Wallace, and widened the gap to 44-32 to finish the third quarter. Hatley’s Luke Moffett led all scorers with 20 points, including four three-pointers, while Thompson paced Amory with 19 points. Wallace with 15 and Jamerison Martin with 11 points were also in double figures for the Panthers.

(G) Aberdeen 44, Hatley 26: The Lady Bulldogs held an 11-6 lead at the end of the first quarter and a 26-18 advantage at the half and were able to open that to double figures with a 9-3 run of the third quarter. Jamiyah Hoskins scored a game-high 15 points for Aberdeen, and Tamia Walker joined her in double figures with 10 points. Hatley’s leading scorers were Emma Rose Thompson with eight points and Emilee Slade with seven points.