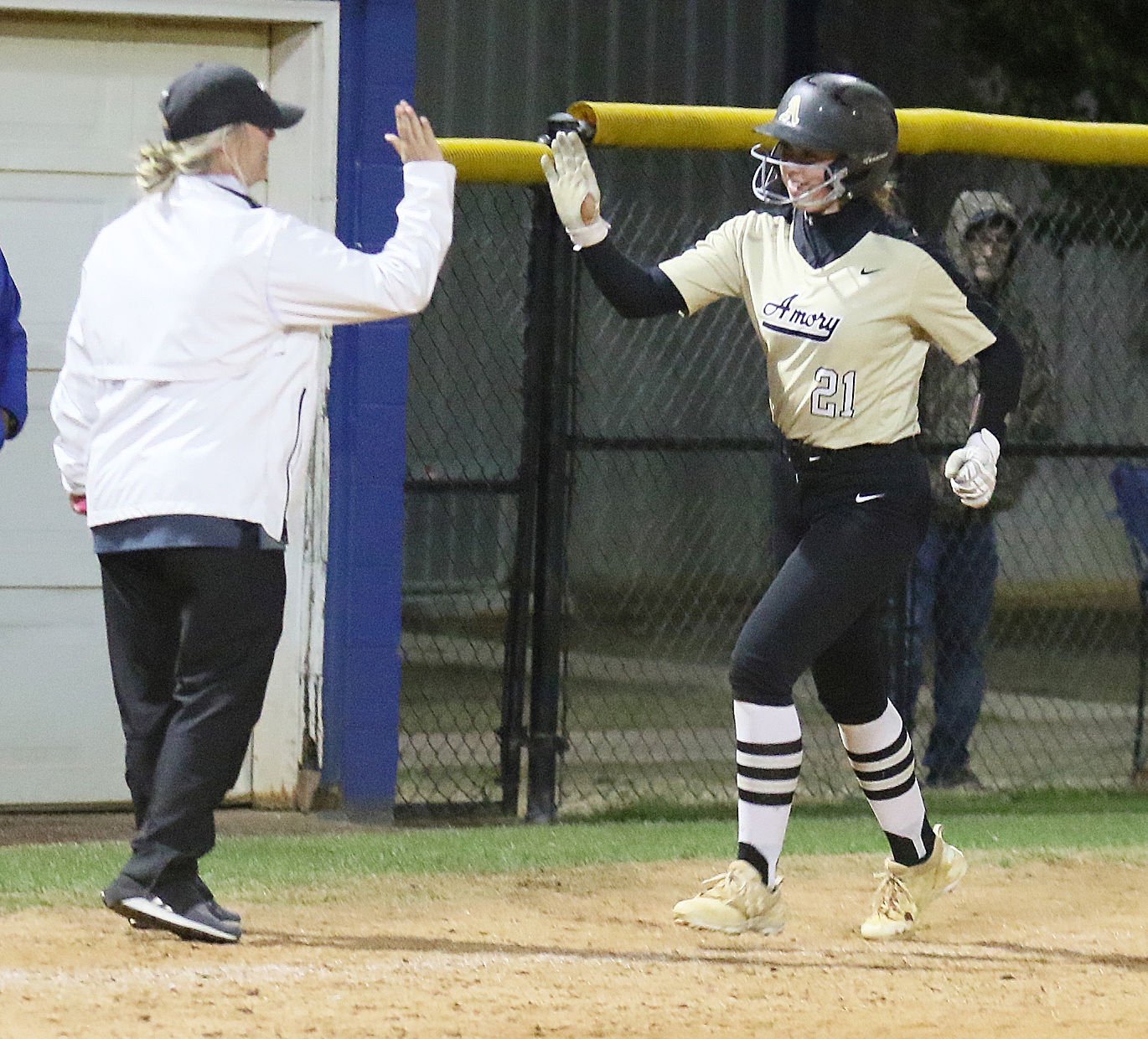 Amory’s Ella Phillips gets a high five from coach Jessica Seger as she rounds the bases on her solo homer in the seventh inning. 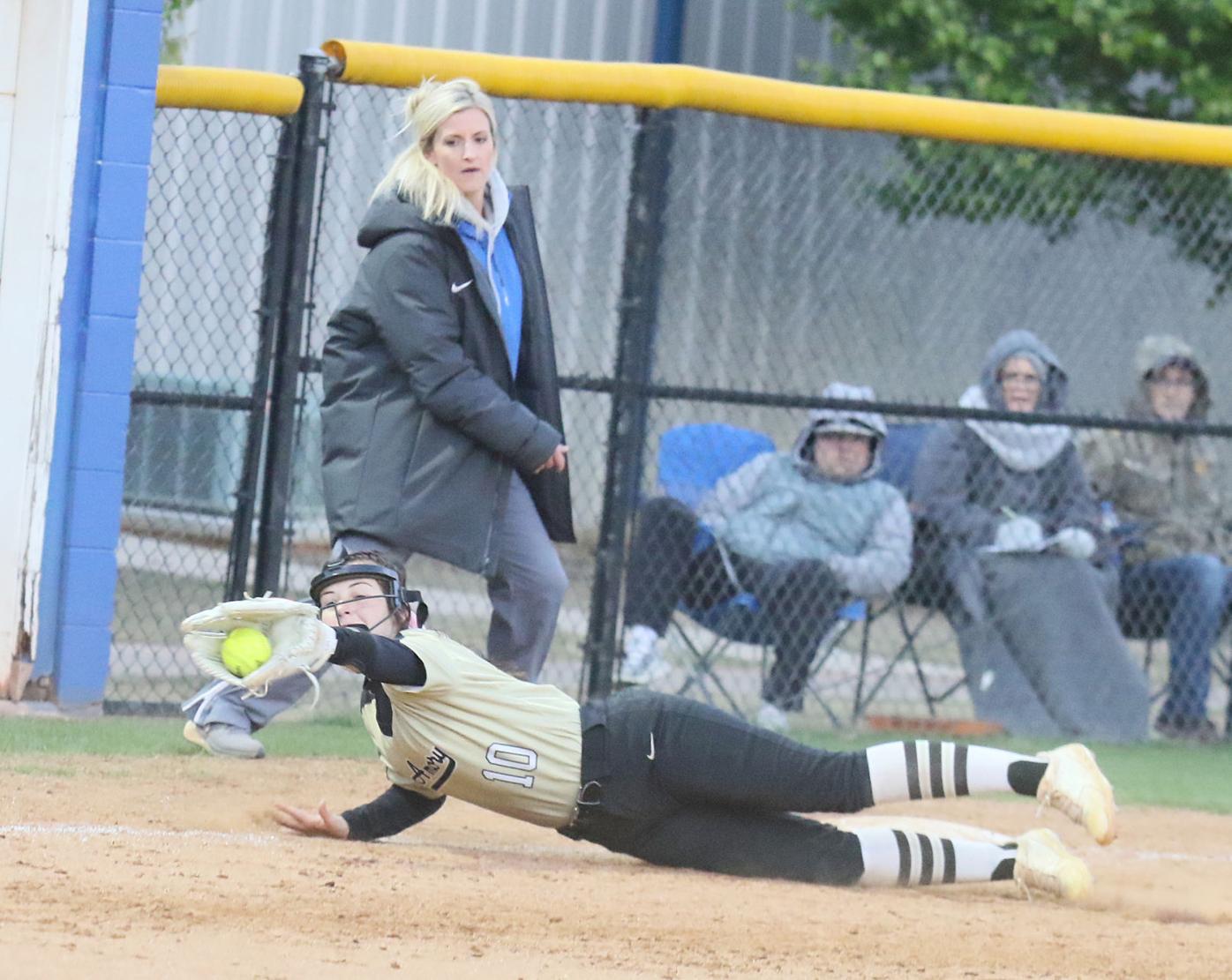 Amory third baseman Karsen Sanders dives to make a stop on the infield. 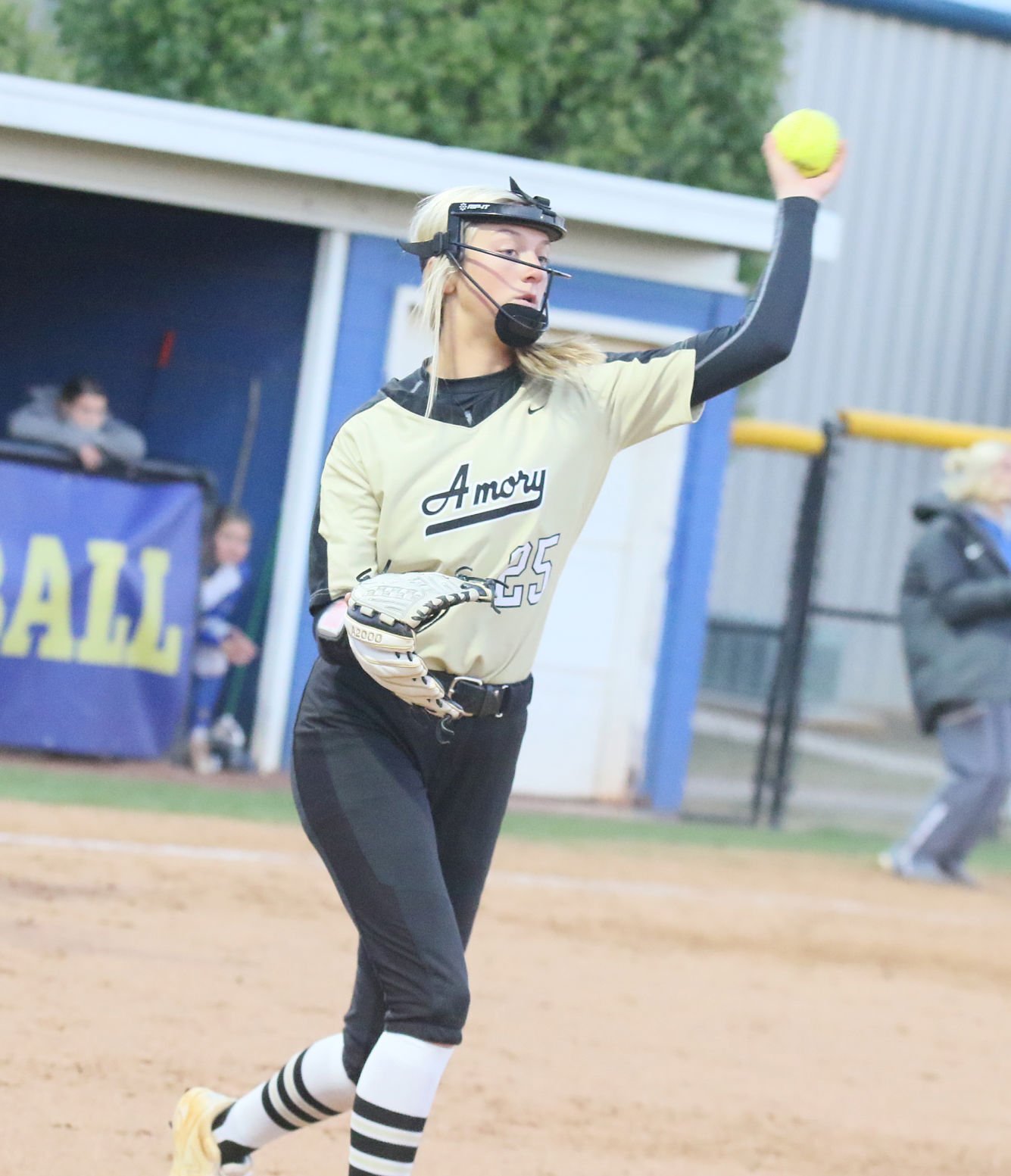 Amory pitcher Reese Griffith throws to first after fielding a bunt. Griffith picked up the win, allowing one run on two hits in four innings. 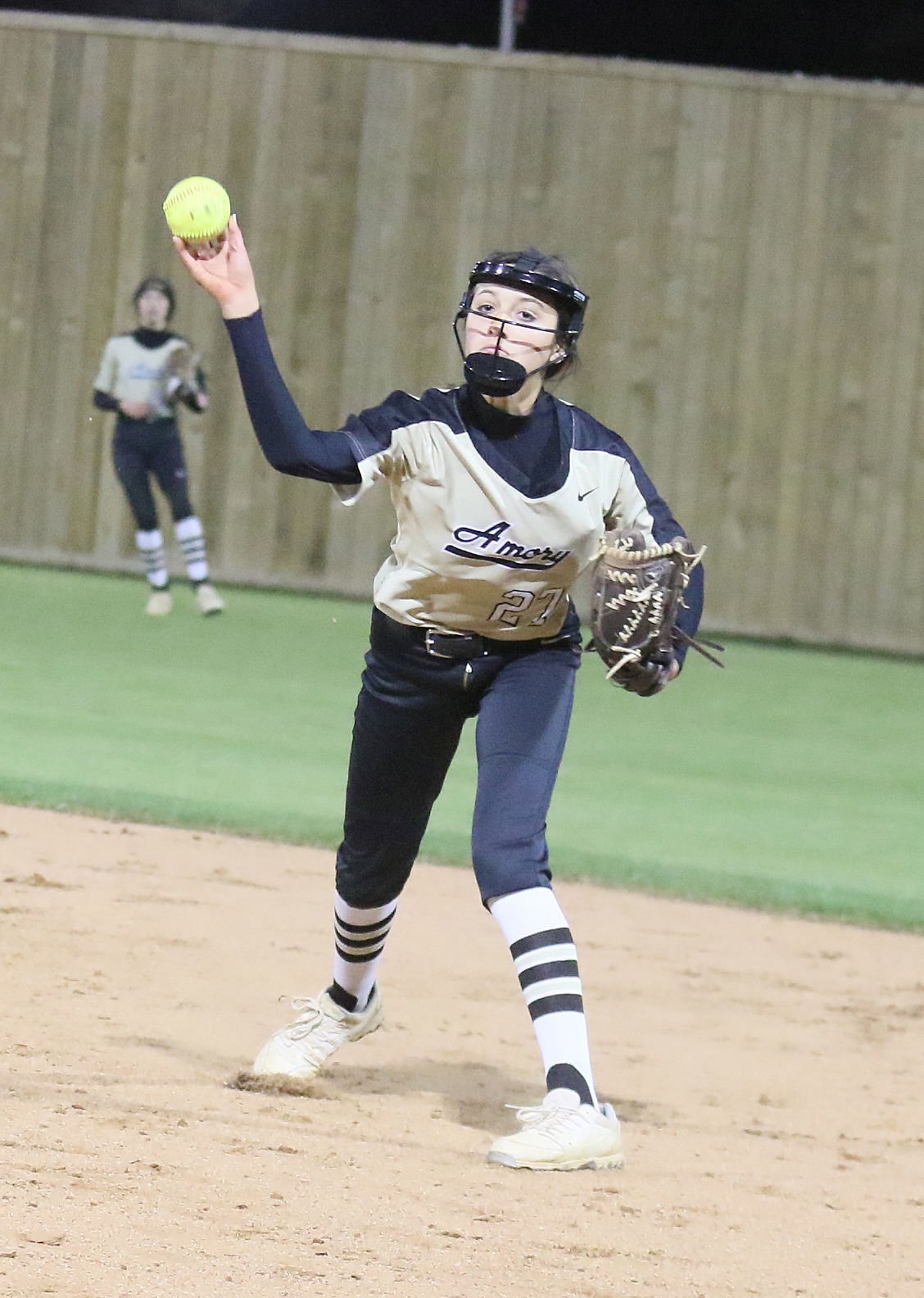 Amory second baseman Ali Holton throws to first for an out in the fifth inning. 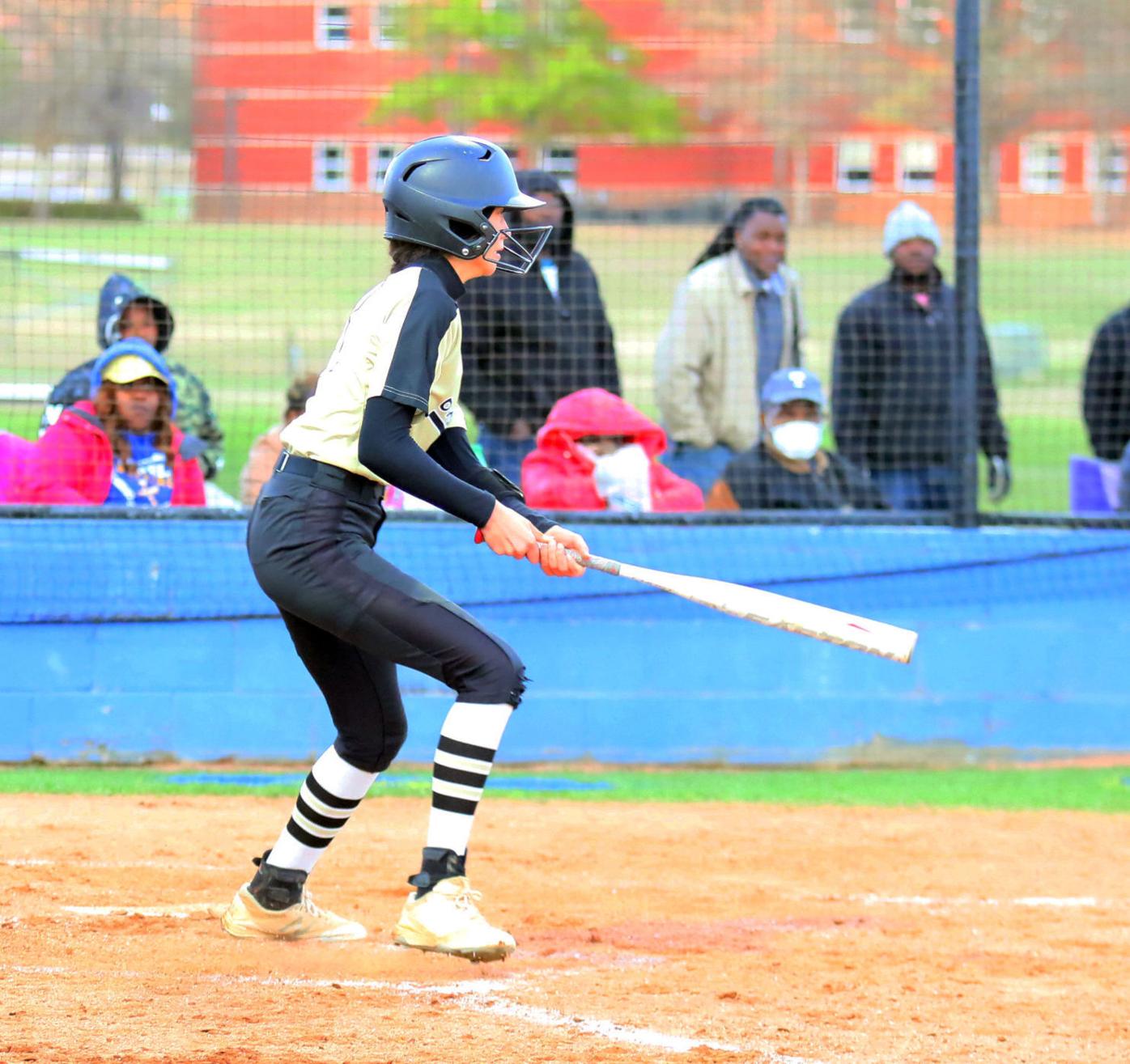 Amory’s Ella Phillips gets a high five from coach Jessica Seger as she rounds the bases on her solo homer in the seventh inning.

Amory third baseman Karsen Sanders dives to make a stop on the infield.

Amory pitcher Reese Griffith throws to first after fielding a bunt. Griffith picked up the win, allowing one run on two hits in four innings.

Amory second baseman Ali Holton throws to first for an out in the fifth inning.

TUPELO – The Amory Lady Panthers struck for a quick 5-0 lead on Thursday night on the road against Tupelo, seizing the momentum and never letting go as they rolled to the 11-4 victory over the Lady Wave.

“Our girls do exceptionally well of staying and playing from one side of the game to the other,” Amory coach Jessica Seger said. “You put up five runs in the first inning, which is a good lead, but what I have stressed to our girls is no matter how many runs we score, we play from start to finish. You finish the game, and they came back in and squeaked out four runs. If we had let off the gas, it would have been intense and more pressure.”

Amory’s five-run first inning came with the ball never leaving the infield. Maggie Kate Cummings reached on a wild pitch after a strikeout, and Macie Williams got on with an infield hit. Reese Griffith hit a grounder to third that everyone was safe on to lead the bases, and Karsen Sanders’ groundball was thrown away at second to bring home a pair of runs.

Emarie Boddie kept it going, being hit by a pitch and later scoring on a passed ball. Laney Howell’s infield single brought home another run, and Julianna Simmons grounded out to first to score Howell and make it 5-0.

Tupelo was able to get on the board in the bottom of the third, scoring after back-to-back hits and then an error on a bunt, but Amory worked out of jams in both the second and third innings, first getting a runner out at home and then getting another out at third.

“I tell them to stay in the game,” Seger said. “Laney in center does a real good job of reading the bases and knowing where to throw it, and they are just locked in from start to finish, which is huge.”

The Lady Panthers responded with two more in the fourth. Ella Phillips smashed a triple off the wall in center field, and Emma Pinkerton picked up the RBI with a grounder to first to score her. Cummings kept it going with a base hit down the right field line, and Griffith helped her cause with an RBI single to make it 7-1.

Amory kept putting the game out of reach, adding three more runs in the top of the sixth with Pinkerton and Macie Williams scoring each scoring on wild pitches and Griffith driving in another run with a groundout to short.

Those insurance runs were key as Tupelo threatened for a big inning in the bottom of the inning, scoring three runs after two walks, two hits, a sacrifice fly and a wild pitch.

Phillips put the exclamation point on the game by blasting a solo homer in the top of the seventh and then getting the Lady Wave out in order in the bottom half to finish off the win.

“Our pitchers, Reese and Ella, have done a good job this year, especially when it’s tough behind the plate,” Seger said. “They adjust and work, and they are fighting back. Ella has done really well coming in and getting the saves, and she hit a ball to the wall and then came in to smack that one, both off different pitchers. I’m just proud of them all with the way they are playing.”

Julianna Simmons and Ella Phillips hit doubles with Simmons’ driving in the first run in the fifth inning.

Reese Griffith went five innings in the start and struck out 11 on the night, while Phillips threw the last two scoreless innings.

The opinion page: My annual column