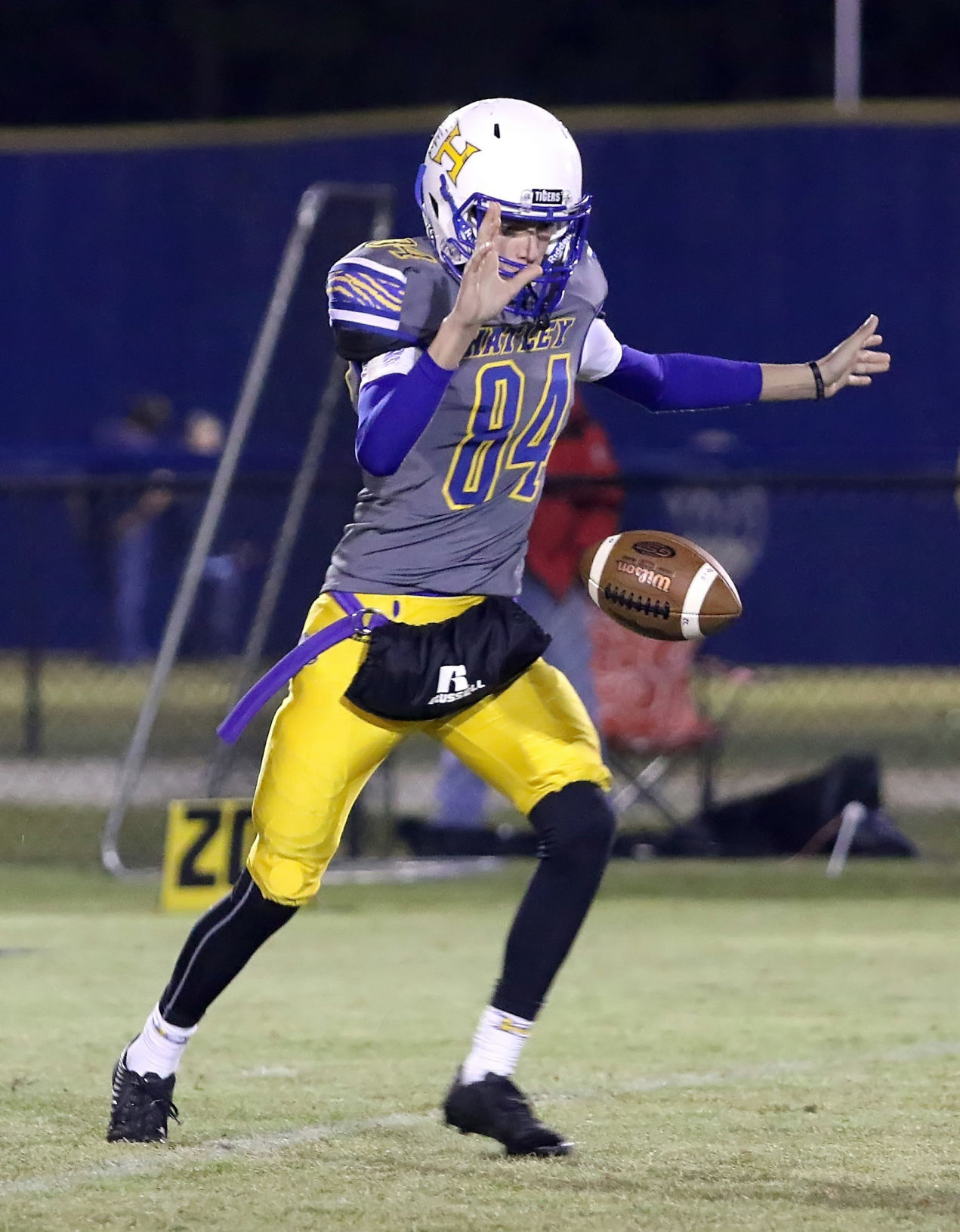 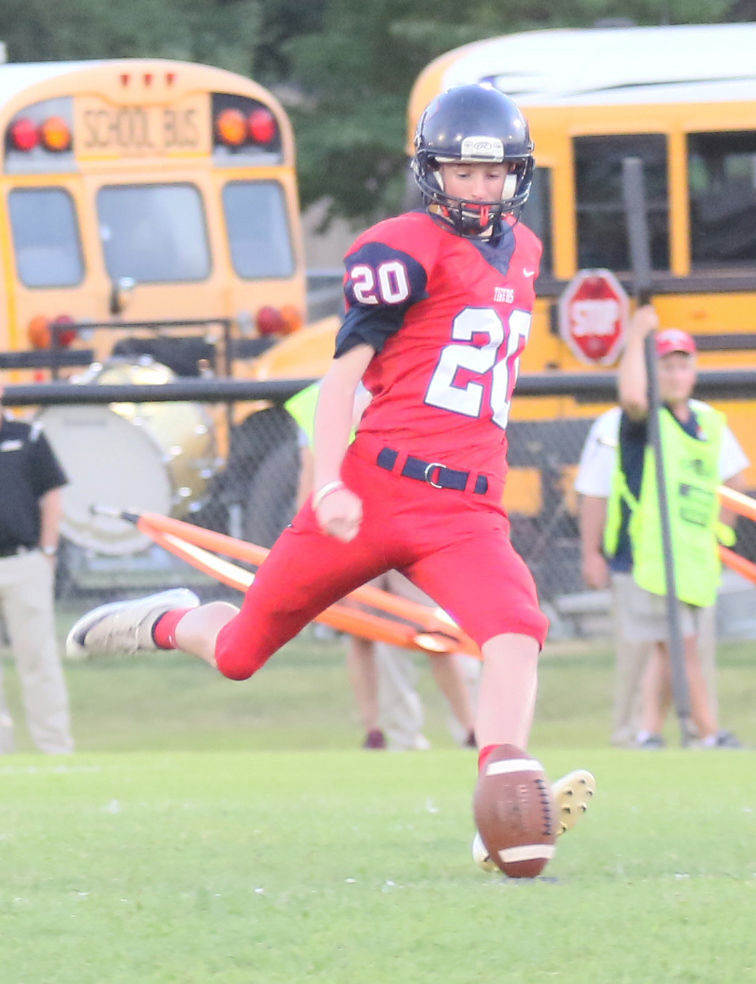 Nettleton’s Jackson Cheek is ranked first in the state in the Class of 2022 kickers. 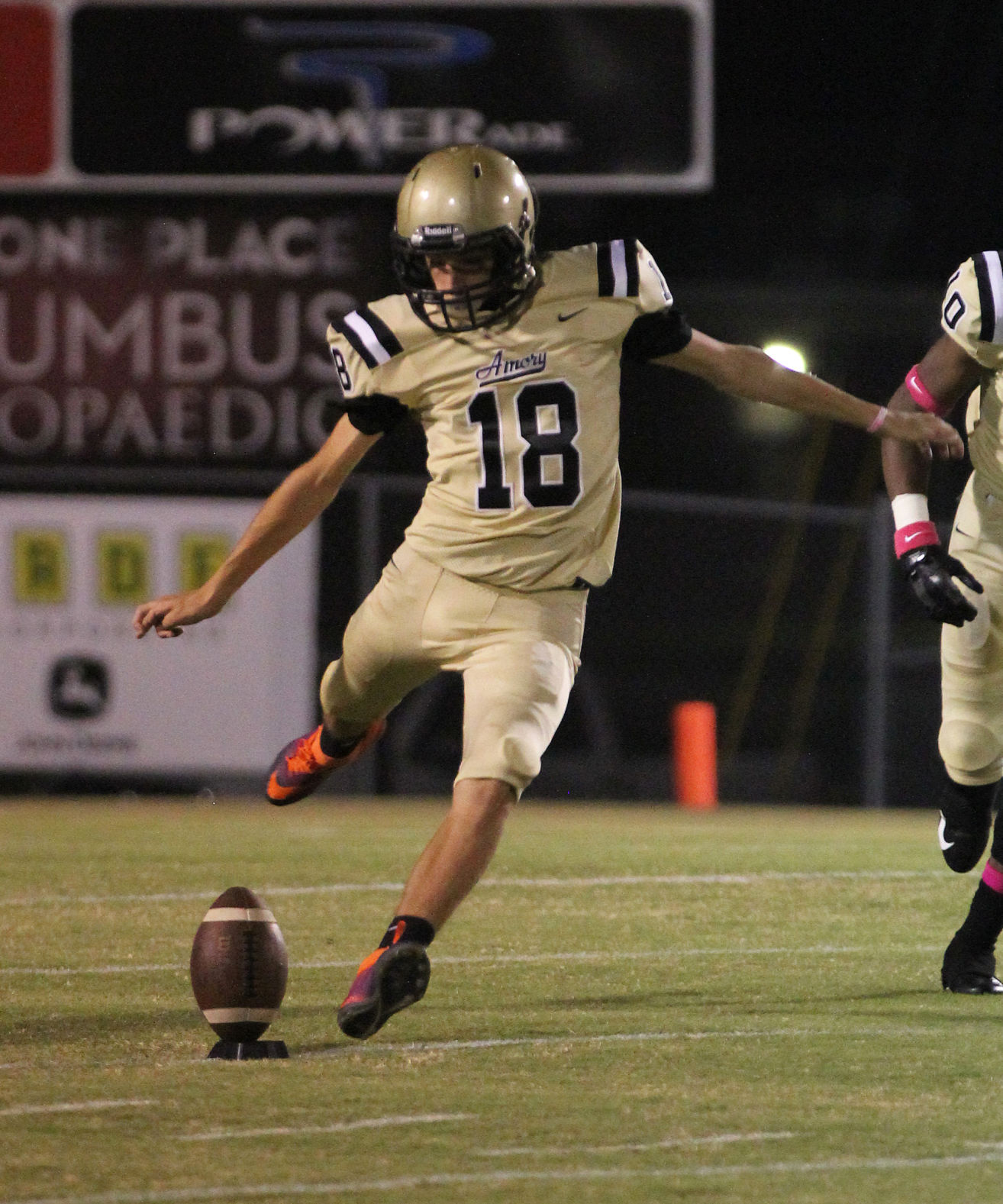 Amory kicker Bryn Camp has been solid for the Panthers in the kicking game for the last two seasons. 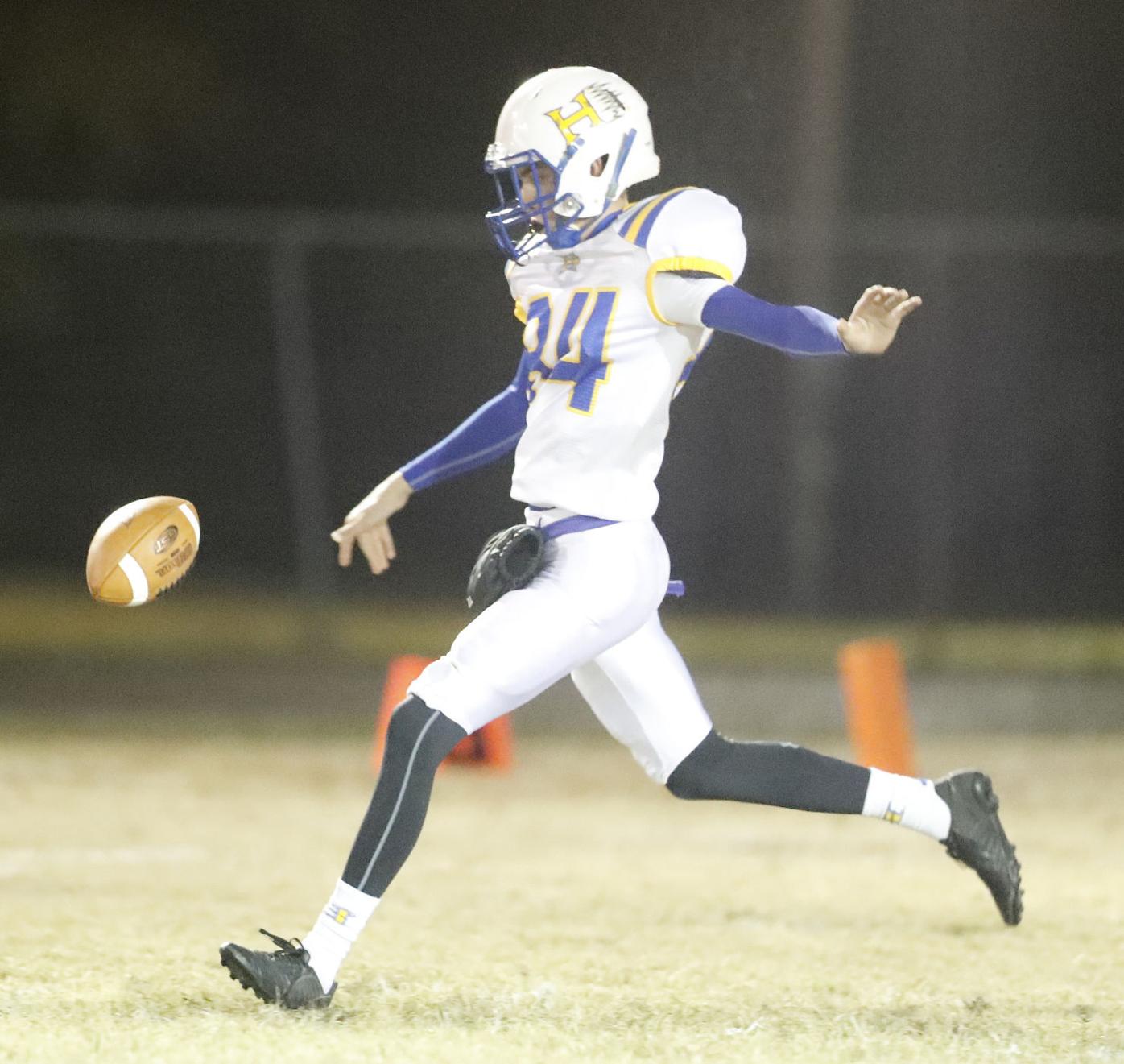 Luke Moffett kicks a field goal for Hatley in the Tigers’ final game of the season in 2019, a playoff loss to Amanda Elzy. 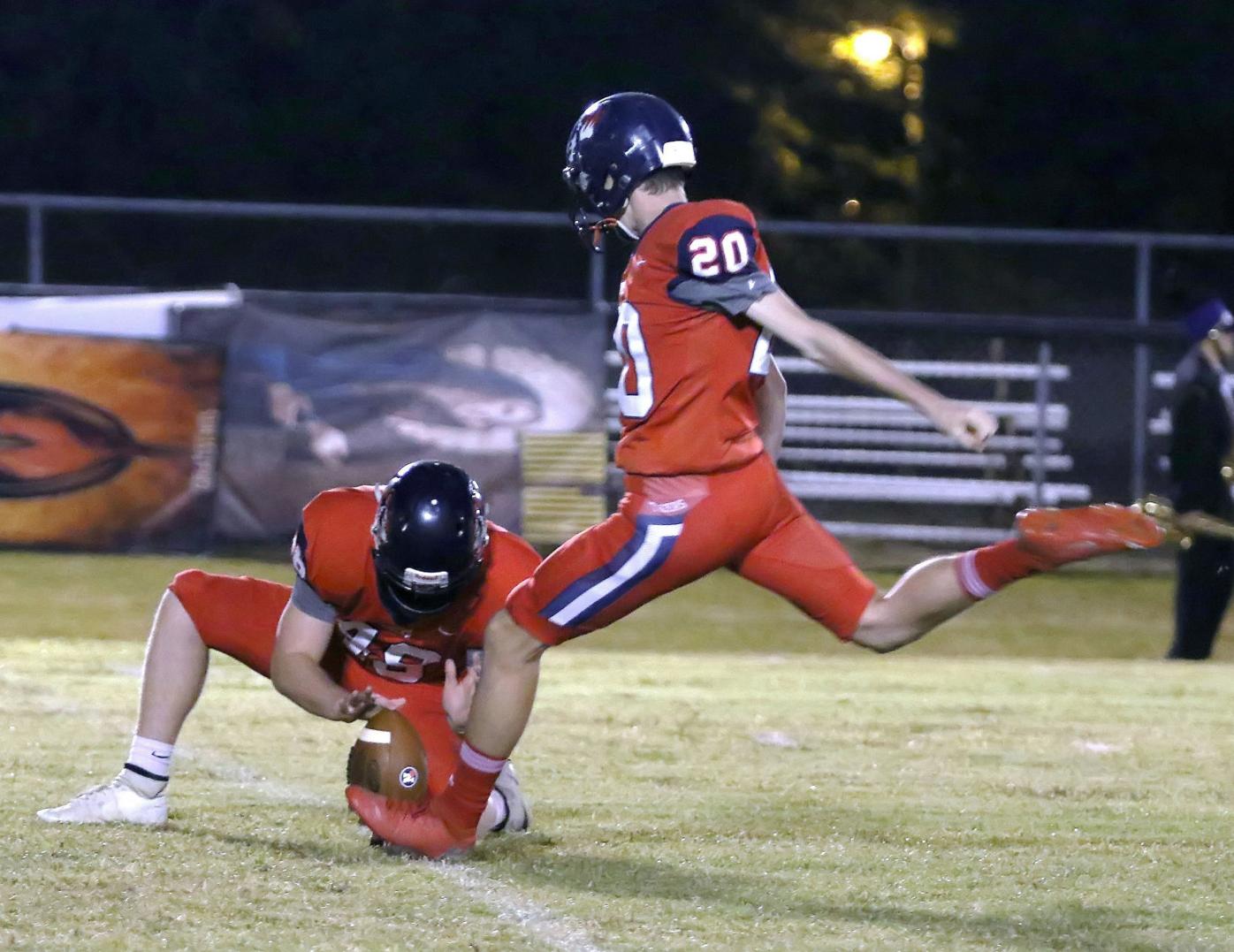 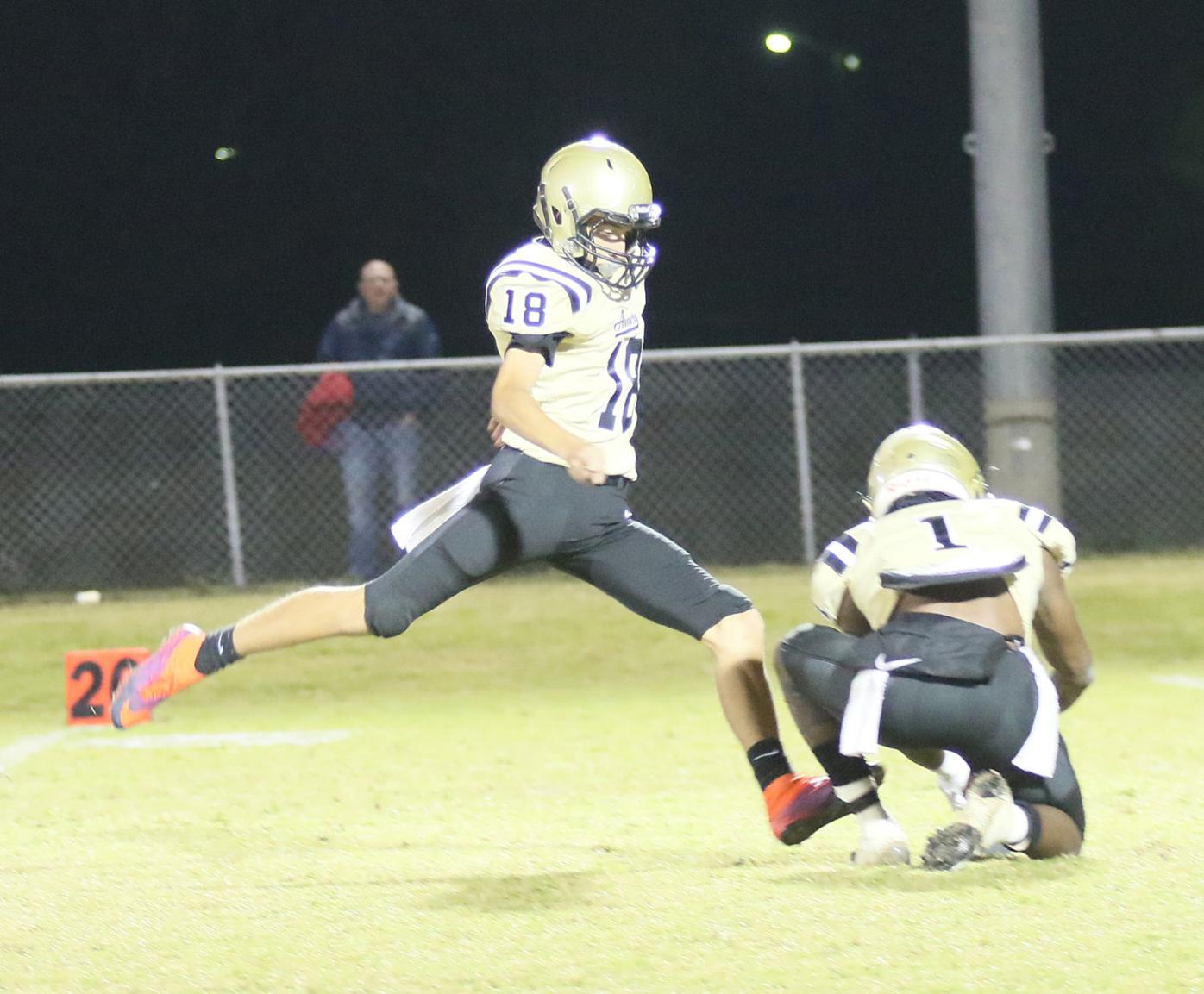 Camp kicks a field goal in a division win against Mooreville during his sophomore season.

Nettleton’s Jackson Cheek is ranked first in the state in the Class of 2022 kickers.

Amory kicker Bryn Camp has been solid for the Panthers in the kicking game for the last two seasons.

Luke Moffett kicks a field goal for Hatley in the Tigers’ final game of the season in 2019, a playoff loss to Amanda Elzy.

Camp kicks a field goal in a division win against Mooreville during his sophomore season.

A good kicker is an underestimated strength in high school football, but it’s one that Amory, Hatley and Nettleton have been able to rely on for the last few seasons with seasoned kickers Bryn Camp, Luke Moffett and Jackson Cheek.

Amory’s Camp and Hatley’s Moffett are both seniors, with Nettleton’s Cheek being a junior. All are at least three-year starters with Moffett going into his fourth season as Hatley’s kicker.

Both Cheek and Moffett spent time kicking camps during the summer with favorable results.

Moffett went to the Chris Sailor camp in Texas and left being ranked a four-star kicker.

“I just have been going to a lot of camps, and they have helped me a lot,” Moffett said. “They did a lot of charting sessions on us, and that’s how they rated me. They watched us on kickoffs, punts and field goals. I averaged 60 yards for my kickoffs. On my field goals, they just charted us from different yard lines and rated us.”

Moffett said his longest field goal was a 50-yarder.

“He’s out here working on it a lot, even in his own time. He works on it at home as well,” Adair said. “We are just hoping he will continue to push himself, continue to improve and not be satisfied with where he’s at and continue to grow and get better throughout the year so he can be a weapon for us.”

Cheek competed in the Ray Guy camp in Nashville, being ranked a five-star, first out of his class and eighth overall.

His best kickoff was from 74 yards, and he ranked 80 percent on his field goals from the hashes. On kickoffs, his top hang time was a 4.1.

“There were a lot of kickers there, a lot of good ones and ones that could put up some big numbers. I was just trying to get there and get as high as them,” Cheek said. “It was pretty surprising. I’m not one of those guys who just kicks because I play other sports, so I didn’t think I would rank that high. It was pretty good that I was, and I was pretty proud.”

Keith said Cheek also puts in the extra time outside of practice.

“To spend time to work at it like he does, even though he’s really good naturally, shows you the determination, willingness and desire he has to want to get better. He sends videos of himself kicking and working at it,” Keith said. “He stays after workouts and kicks, and that’s on top of him doing travel baseball and other things right now. He wants to be good, and he wants to get better, and that’s a big part of it. Some kids just take for granted that ‘I’m good at this and I don’t have to work at it,’ and it makes you proud to see a kid that’s not above that, one that’s humble enough to say, ‘I still have the opportunity to get better.’”

While Camp didn’t become a part of Amory’s football team until his sophomore year, he said the decision to play was an easy one for him.

“Coach Glenn had asked me one day during PE, and I said that I would talk to my mom about it,” Camp said. “She wasn’t about it at first, and then my dad said to go for it. I talked to her some more, and she finally agreed to it after I bugged her a lot.”

Camp and Cheek are both also some of the leading scorers on their respective soccer teams. Camp scored 25 goals last season.

“Coming from a soccer background, I think kicking a ball helps with kicking a football,” Camp said. “I think it gets my leg in shape for soccer, especially when I’m booming over the goal.”

Amory coach Allen Glenn has recruited soccer players before Camp to handle the kicking duties and has found that area to be a strength for his teams.

“We are hoping that we can put it in the end zone some on kickoffs with Bryn,” Glenn said. “Hopefully his leg has gotten a little stronger, and he has always been fairly consistent on extra points. That’s important. We feel pretty good about Bryn.”

Getting his leg it in

Cheek agreed with Camp that soccer and football go hand-in-hand and that his strengths in one sport can help him out in the other.

“I think football helps me out with soccer a little bit more because the soccer-style kick that I do kind of showed me what I needed to kick on the football and what I need to do,” Cheek said. “They are a little bit different in kicks, but for the most part it’s the soccer-style kick. I just translated that over to football. It’s been to where I have been kicking a football to soccer and then I will still have that same rotation on my leg to where it will help me out a lot more.”

While kickers might just be involved in one phase of the game, it’s still a pressure situation, Moffett noted, to kick a field goal or an extra point.

“It’s not easy. It takes a lot of practice, and you have a lot of pressure if it’s a tied game to kick a game-winner or if you’re down one to try to make an extra point,” he said. “If you miss one even early, it can cost you in the end.”

As far as college plans go, both Moffett and Cheek expressed wanting to kick in college. Camp said he would play football or soccer either one, whichever one presented an opportunity for a scholarship.

“I want to go kick in college. I have had a few emails from a couple of people just wanting to watch me, and that’s about all right now,” said Moffett, who also plays baseball and basketball. “They have seen my highlights on my Twitter.”

Also being a three-sport athlete, Cheek has hopes for baseball at the next level too.

“I would like to get a football scholarship, but also have the chance to play baseball, too,” he said.

A sloppy, ugly win goes down the same in the record book

Tigers shut out Bulldogs after their week off

Beating the streak: Lions capitalize on turnovers to down Noles

Lady Lions open up division with sweep against Okolona