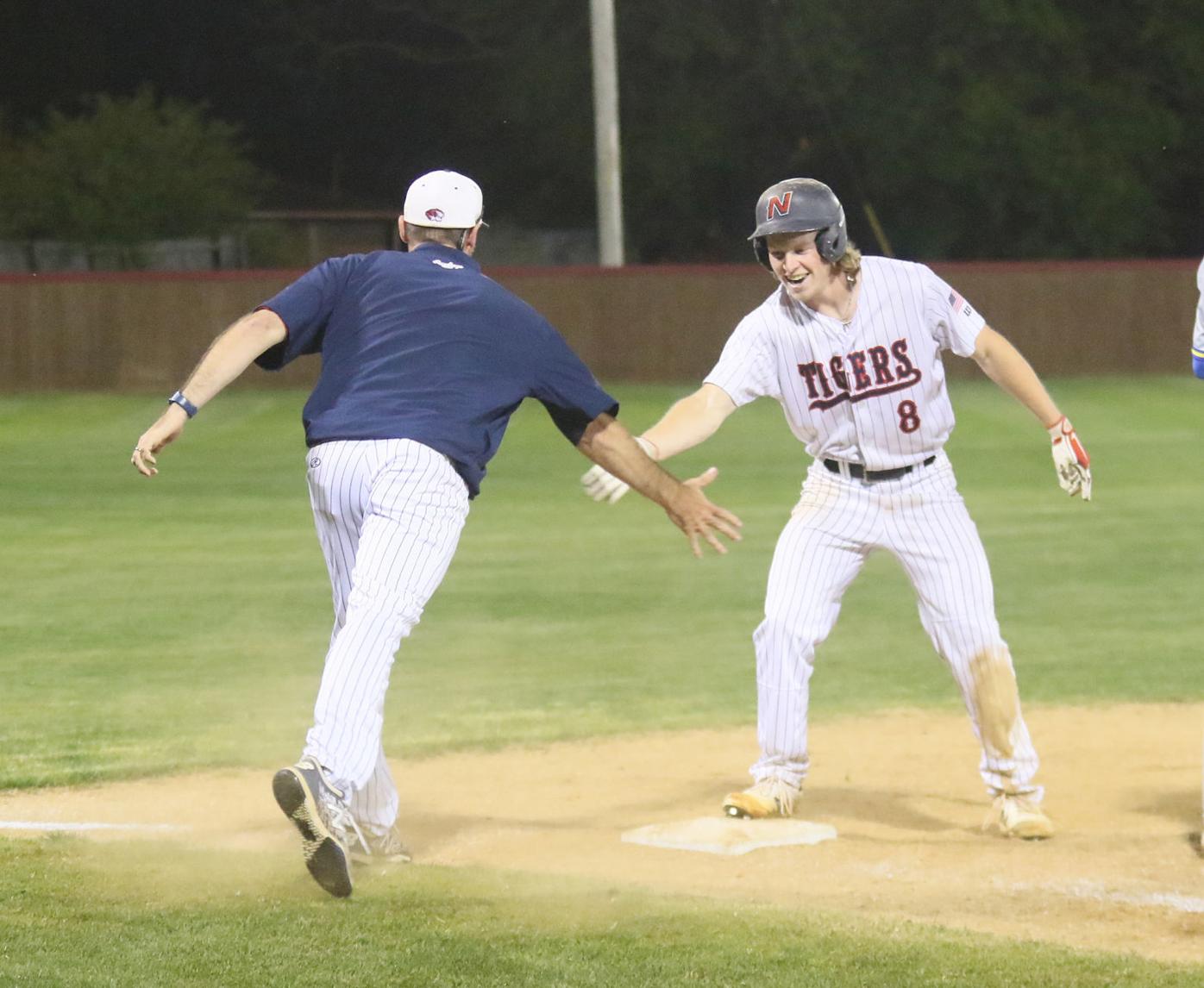 Nettleton's Davis Oswalt gets a high five from coach Joseph Koon after his RBI triple scored the final run against Booneville last Tuesday night. Oswalt was 3 for 4 at the plate and picked up the win on the mound, striking out nine. 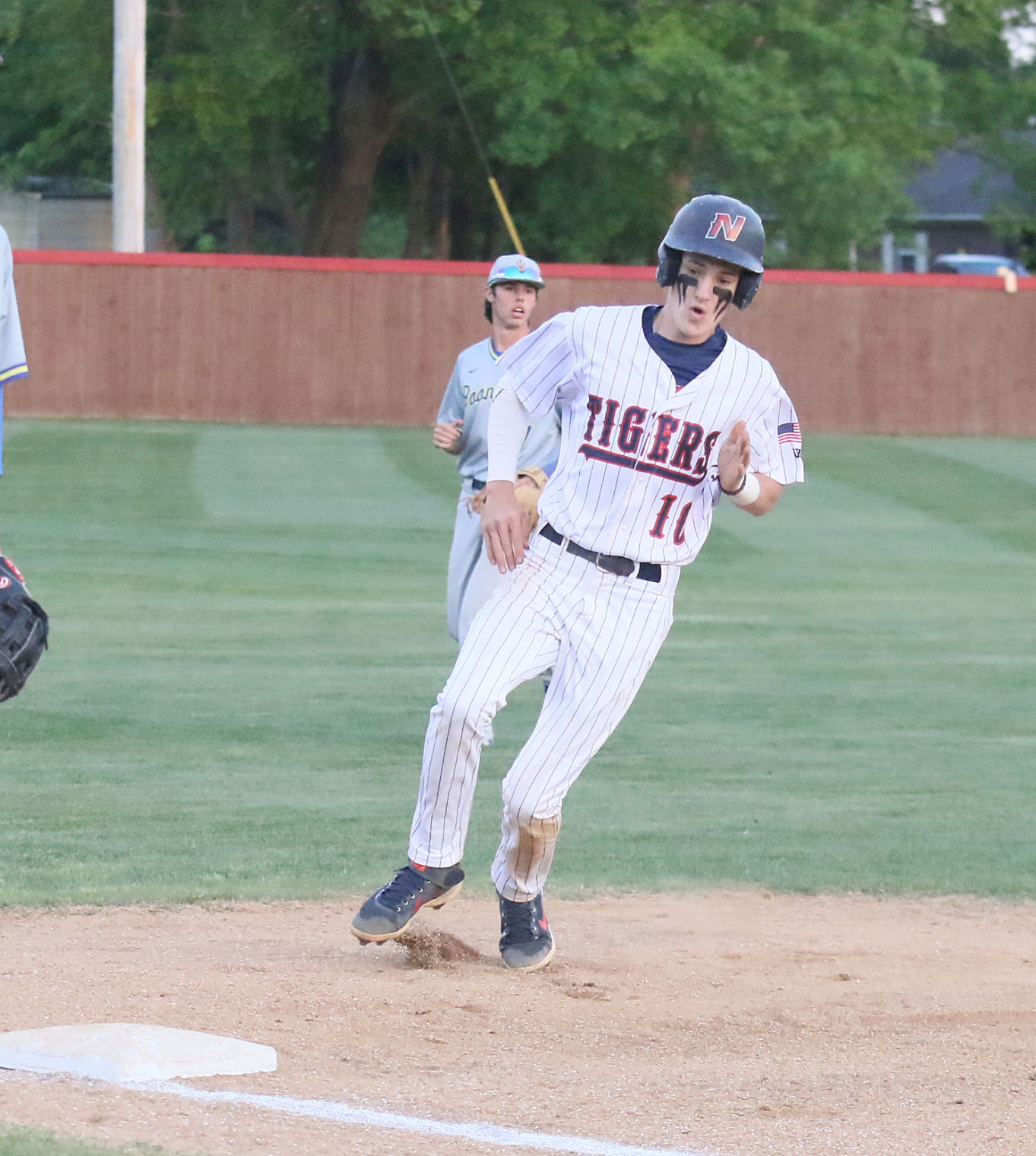 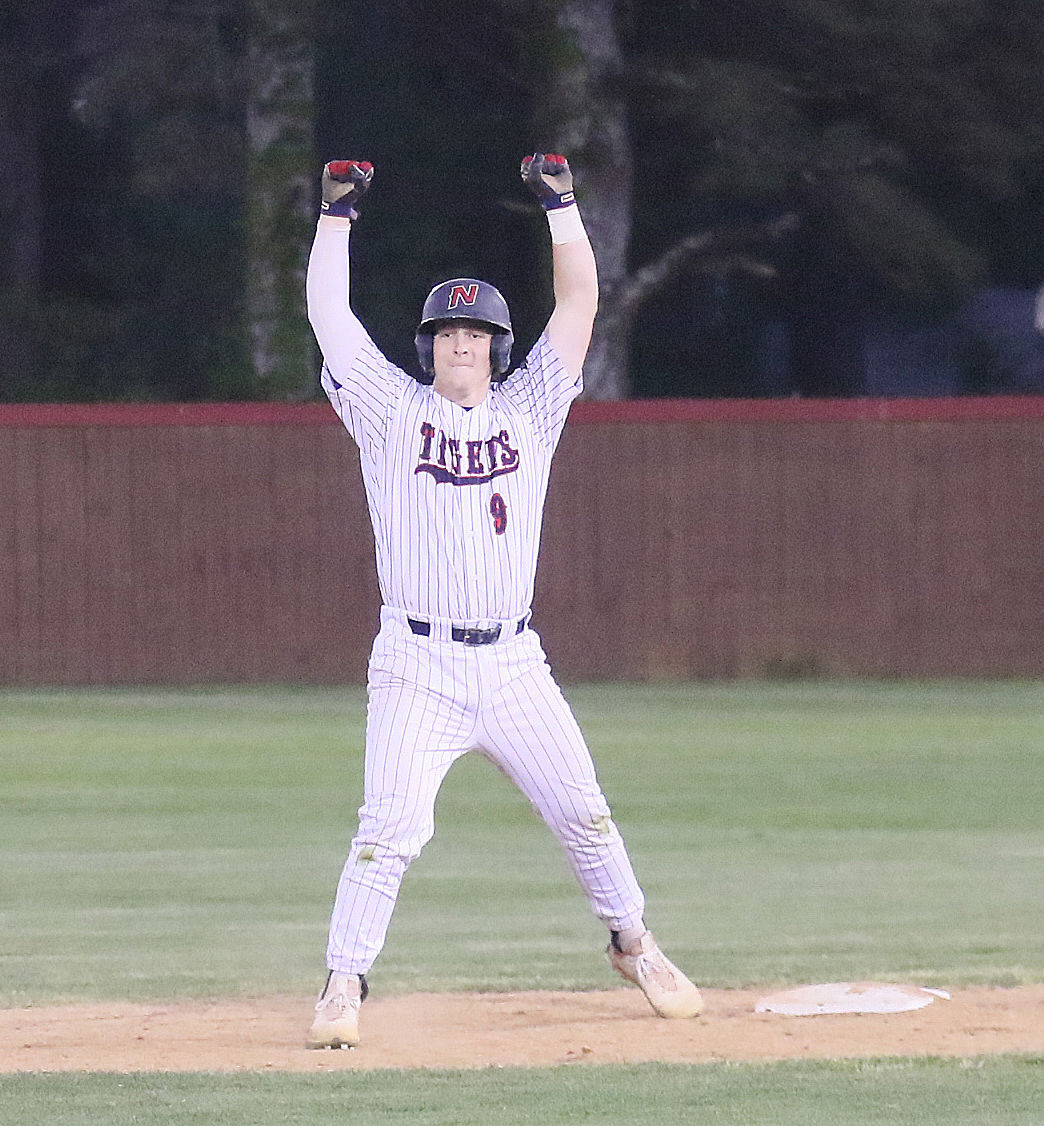 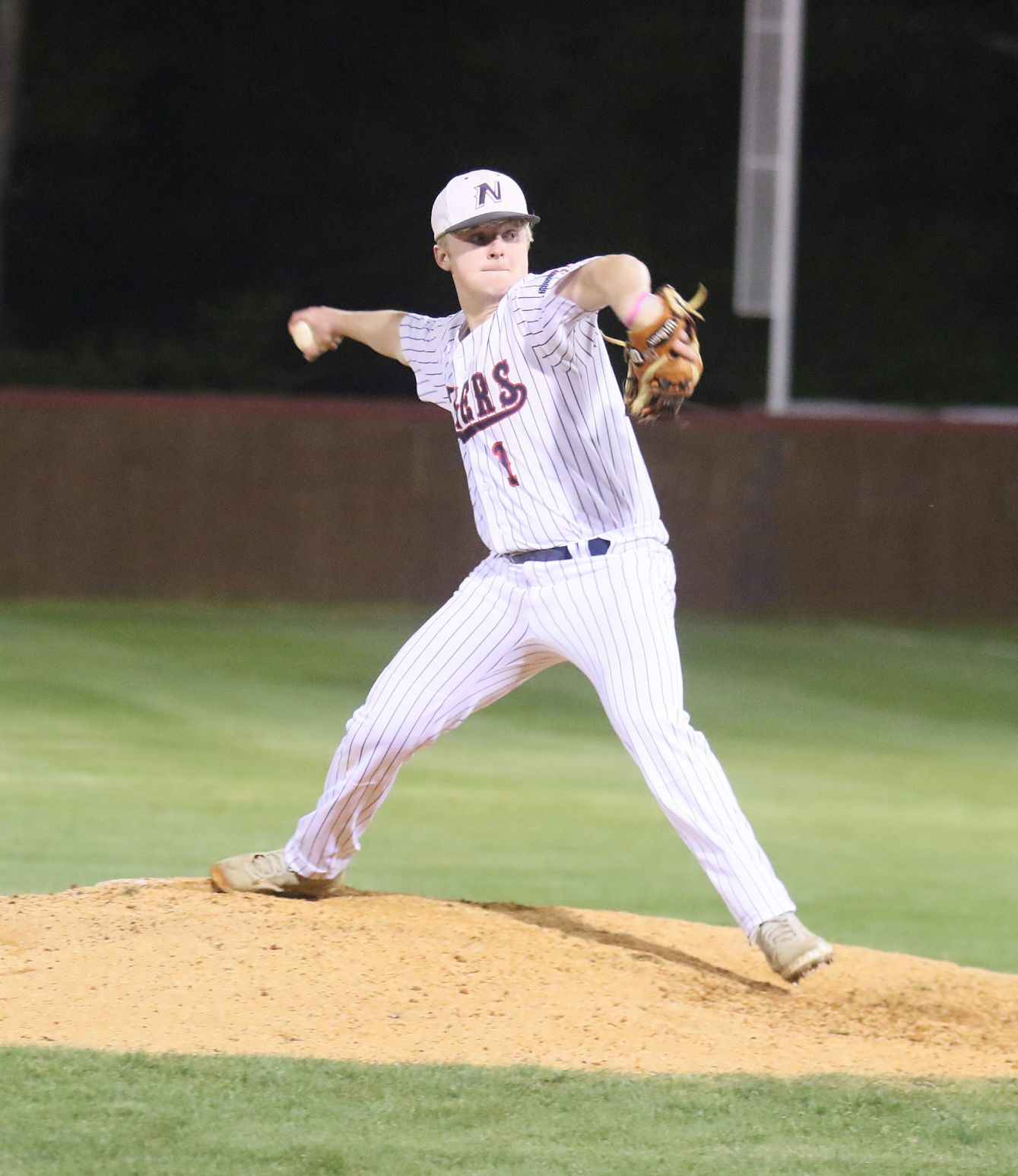 Nettleton's Evan Smith closed out the game with a strikeout looking in the only batter he faced against Booneville. 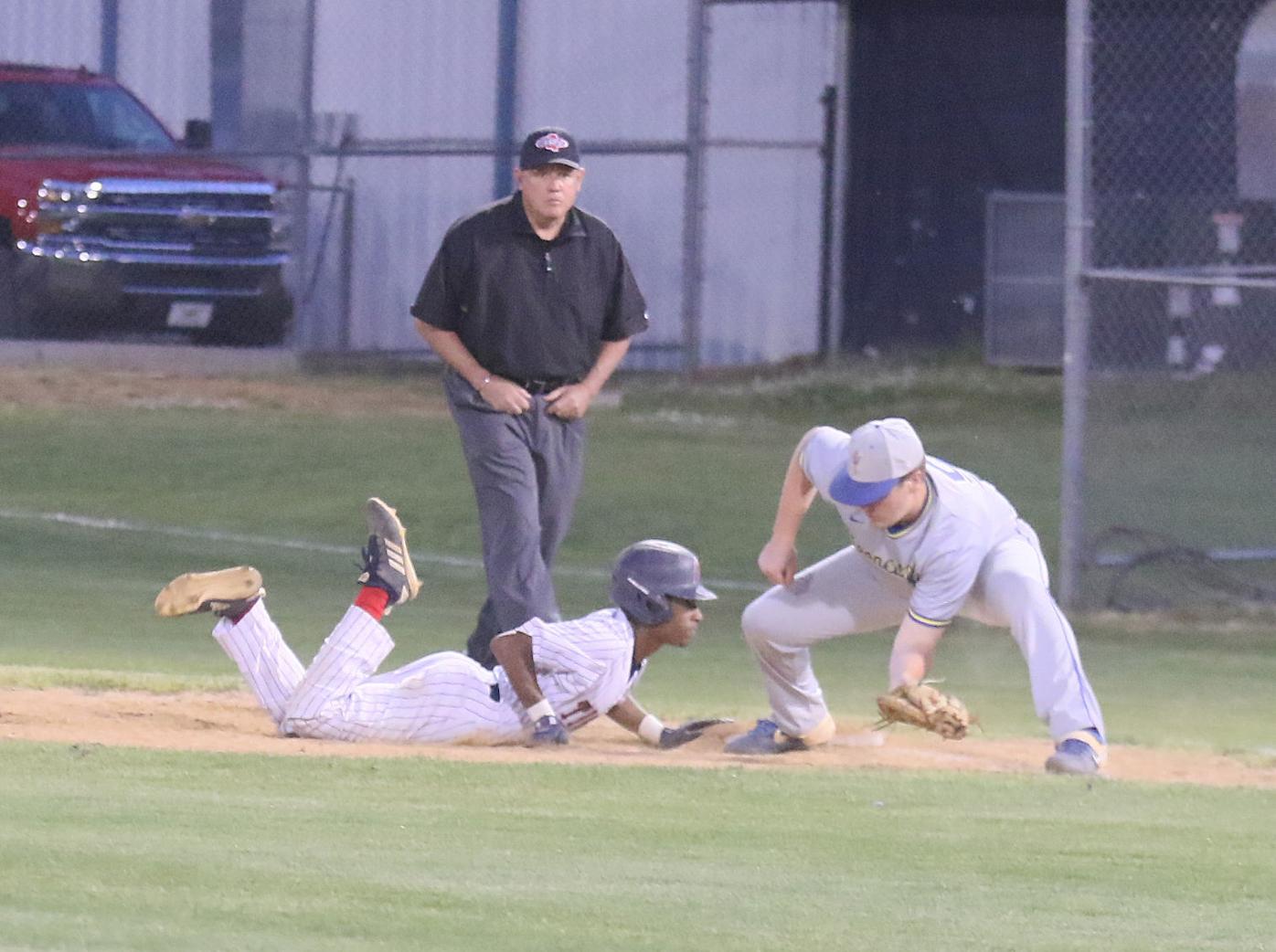 Nettleton's Jaylon Betts dives safely back into the first base bag in the second inning.

Nettleton's Davis Oswalt gets a high five from coach Joseph Koon after his RBI triple scored the final run against Booneville last Tuesday night. Oswalt was 3 for 4 at the plate and picked up the win on the mound, striking out nine.

Nettleton's Evan Smith closed out the game with a strikeout looking in the only batter he faced against Booneville.

Nettleton's Jaylon Betts dives safely back into the first base bag in the second inning.

NETTLETON – With first place on the line, Nettleton ace Davis Oswalt was back in top form last Tuesday night.

The senior went 6 2/3 innings, scattering six hits, walking two and striking out nine as the Tigers’ 7-1 victory sealed first place in Division 1-3A. Evan Smith came on for the final out, getting it on a strikeout.

“I let my defense work tonight, and Booneville did a really good job of running my pitch count up with fouling a lot of balls off,” Oswalt said. “We got some big outs in big situations. With two outs in that last inning, I knew Evan would come in too and fill it up to get the last out.”

The Tigers came out hot, putting up a 4-0 lead before Booneville could crack the scoreboard.

Adam Adkins laid down a bunt base hit to start it off and stole second before Oswalt helped his own cause with an RBI double. Jackson Cheek was intentionally walked, and the move paid off for Booneville as they retired the next three in order.

The bottom of the second inning ended up being the big one for Nettleton as they sent eight to the plate and put up three more runs.

Jaylon Betts drew a walk leading off, and Drew Humble smoked a double to put two in scoring position. Betts came home on a passed ball to make it 2-0, and Adkins drove in a run with his single to center. Oswalt loaded the bases with a hit, and the last run scored when Smith hit into a fielder’s choice and Adkins came in on an error on the play.

Booneville’s lone run came in the third inning on a Jackson McCoy RBI double, which was just their second hit of the game, after an error.

Nettleton answered in the bottom of the fourth with two more runs. Adkins led off with his third hit, and after another intentional walk to Cheek, Smith made them pay with an RBI single. Cade Oswalt drew a bases-loaded walk to bring in another run.

The combination of Adkins and Oswalt came through with the final run of the night as Adkins smacked his fourth hit, and Oswalt nearly had an inside-the-park homer but had to settle for an RBI triple.

The first two in the lineup combined for seven hits, four from Adkins and three from Oswalt.

“Davis was huge at the plate too, and he was able to really get after it from both sides,” Nettleton coach Joseph Koon said. “Adam has been working hard, and for him to step up like that in his new leadoff role, it’s just his second week for him to be there, and it’s huge for him at the top of the lineup to be able to do that and be on base and put the pressure on them.”

Booneville’s two-out hit chased Oswalt from the game due to pitch count, but Smith needed just three pitches to get the final strikeout.

“Davis looked great and competed his tail off,” Koon said. “He worked some deep counts, and those hitters battled and put together some quality at bats, which you always expect out of Booneville with the kind of club they always have and continue to produce. No doubt about it that Davis set the tone for us.”

The win sets up a first-round matchup with Noxubee County. Koon said getting first place in a tough division is momentum going into the playoffs.

“This division, everybody beat up on each other all year, and there are some great clubs,” Koon said. “It’s funny how talented everybody is, from top to bottom. There were some good teams left at home, and obviously it’s great to win the division and get the No. 1 seed, but we will have to get through our own division. They will be competing against each other here in a few weeks. I’m so proud of our guys though because the energy was great, and they played for each other. Obviously the fans were electric tonight and showed up, so it was great to be at home for this game.”