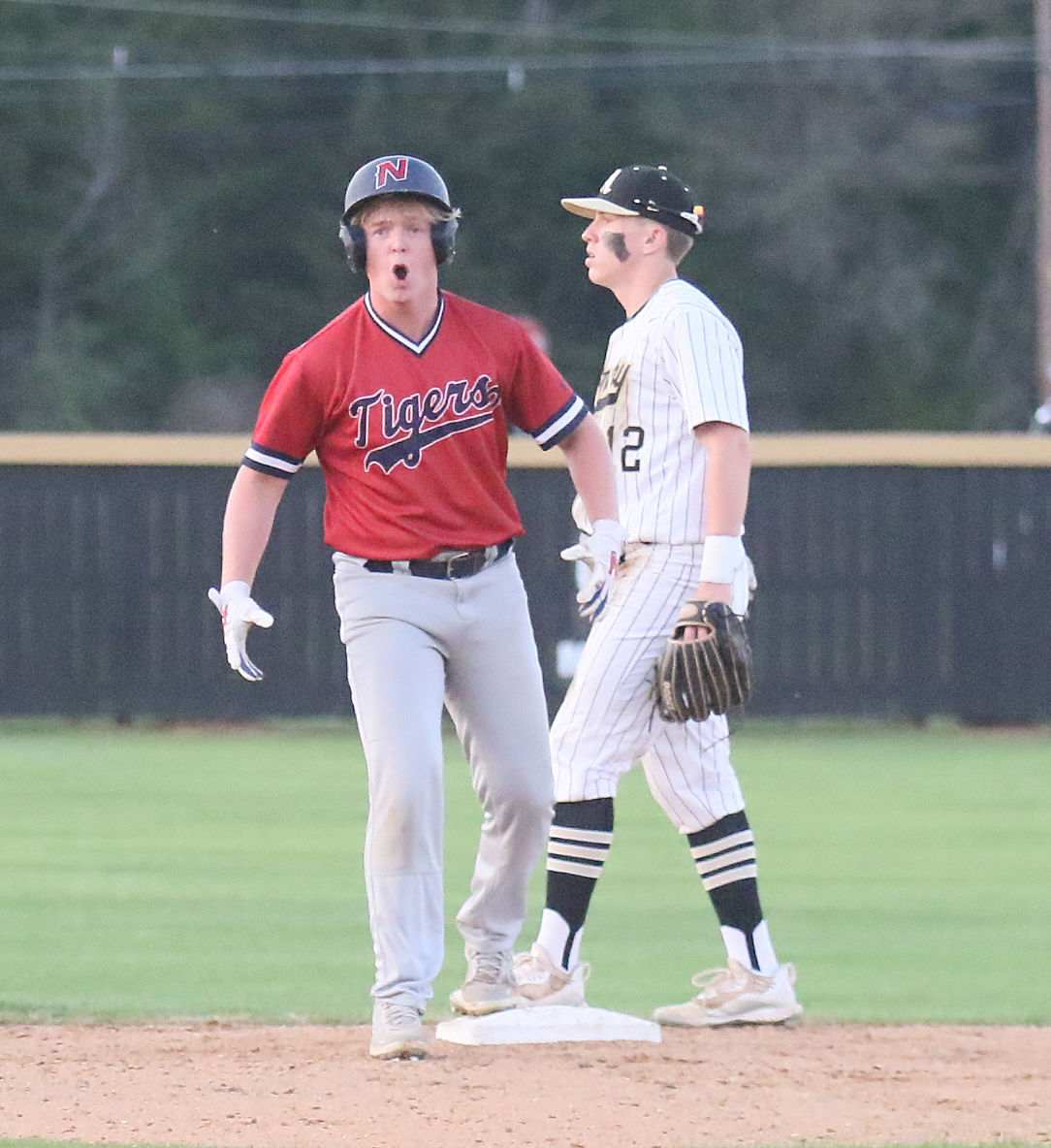 Nettleton's Evan Smith celebrates smashing an RBI double to drive in the Tigers' first run of the game on Friday night. 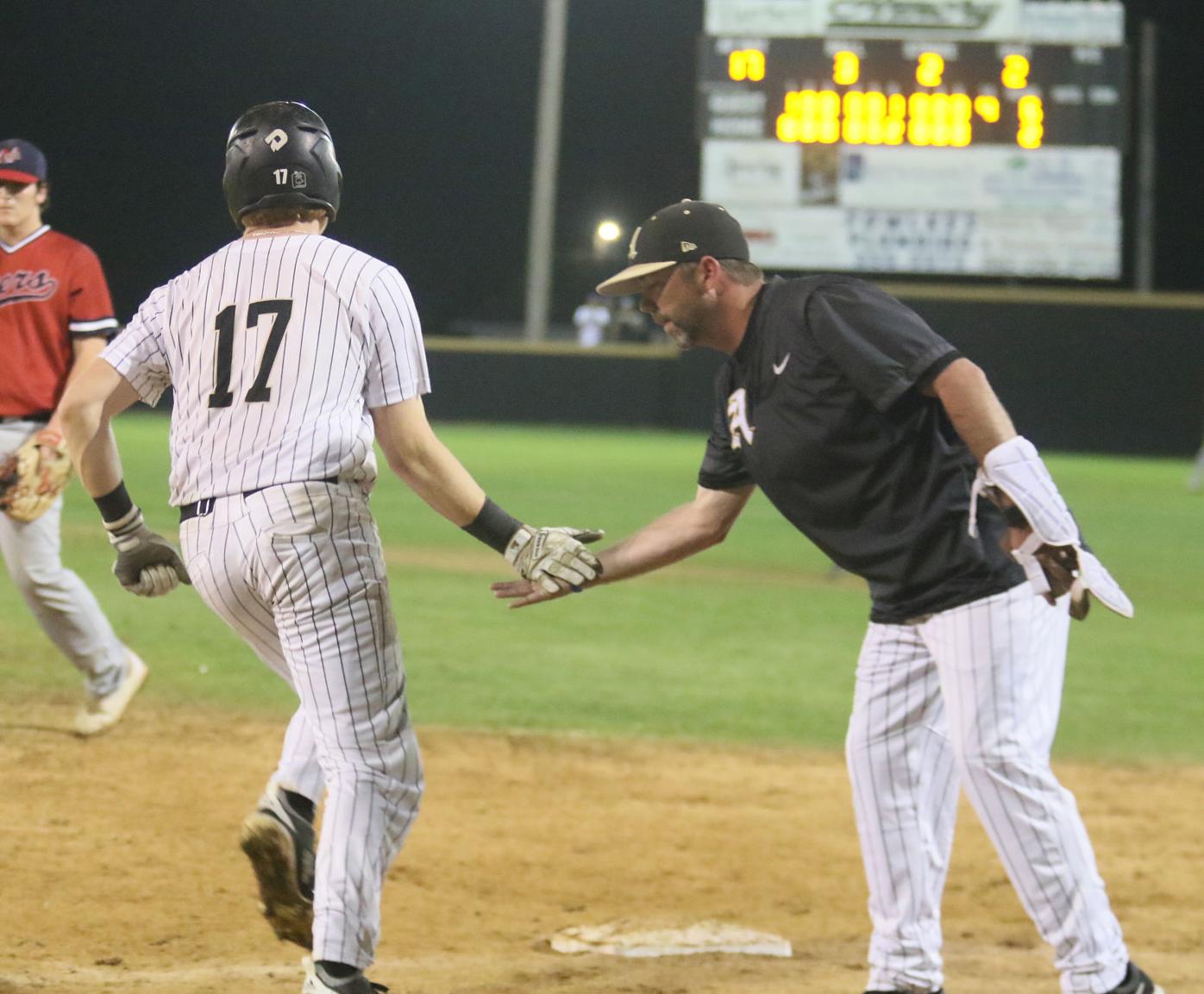 Amory's Bo Rock gets congratulated by assistant coach Chris Pace as he rounds the bases on a two-run homer on Friday night, his third of the season. 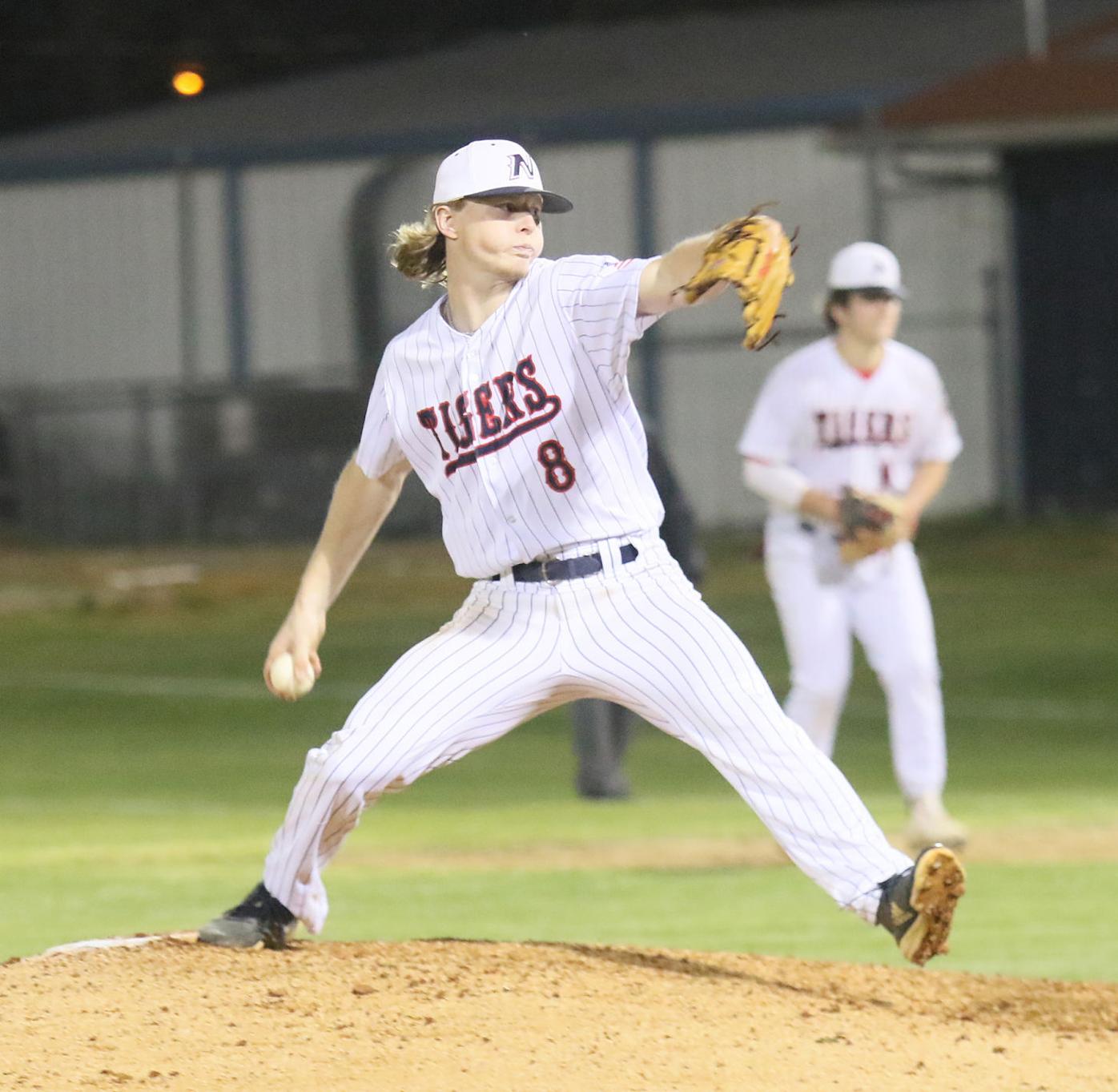 Nettleton's Davis Oswalt picked up the win in both games - with eight shutout innings and 10 strikeouts on Monday and five innings of relief and seven strikeouts on Friday night. 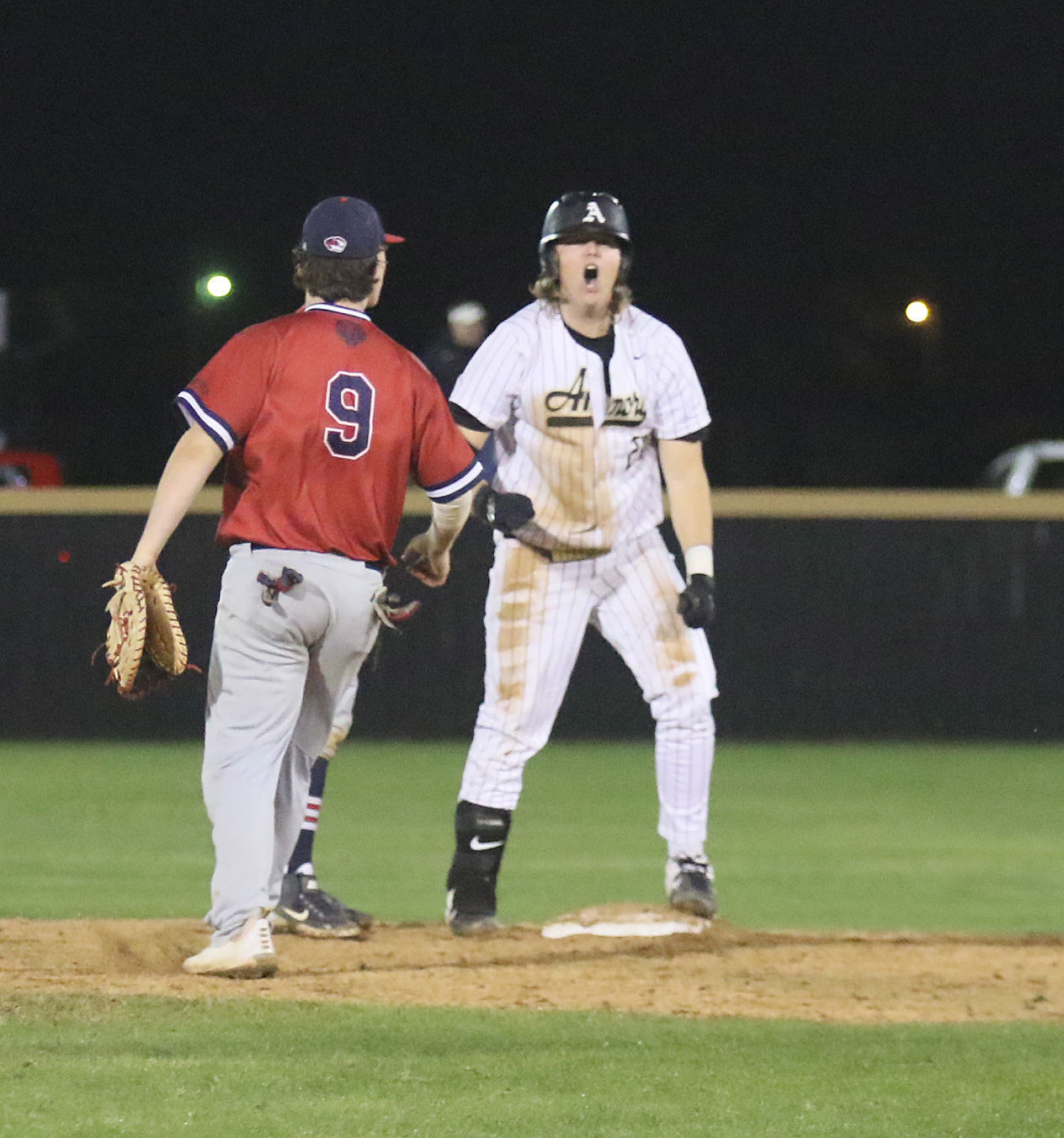 Amory's Ethan Kimbrough pumps the Panthers' dugout up after his double off the wall in the ninth inning. 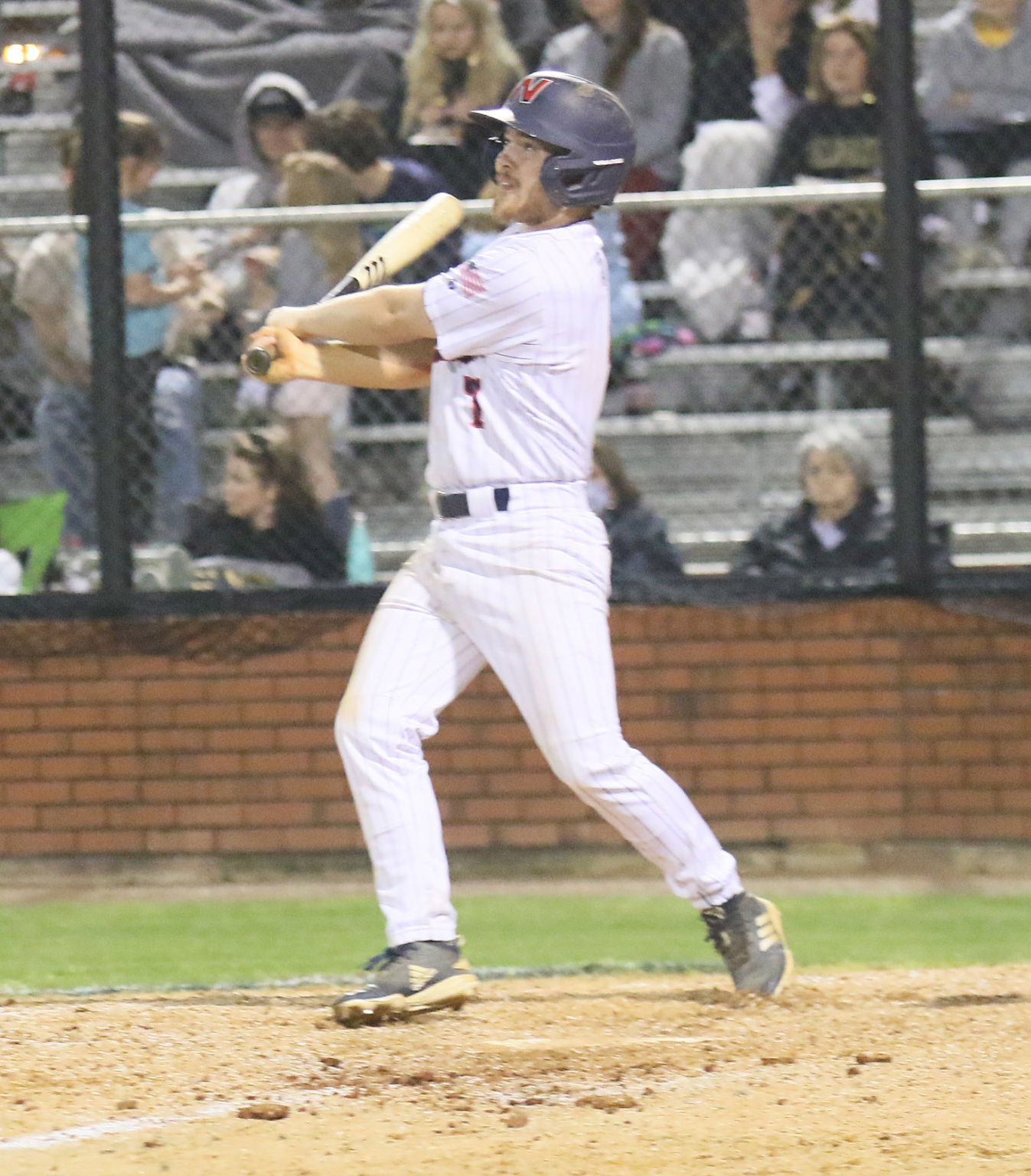 Nettleton's Carter Crawley had the walkoff RBI single in the bottom of the eighth to win the game last Monday night. 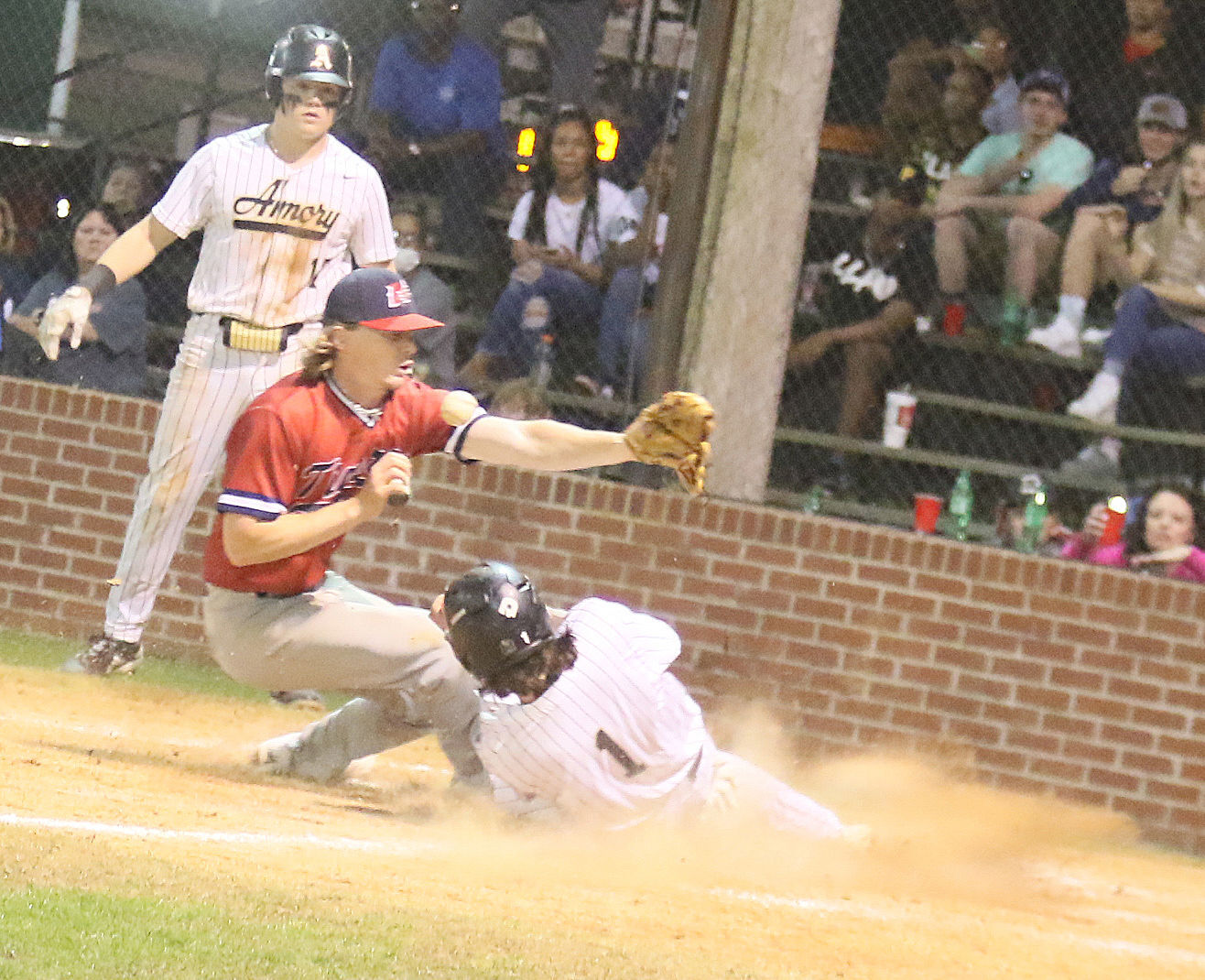 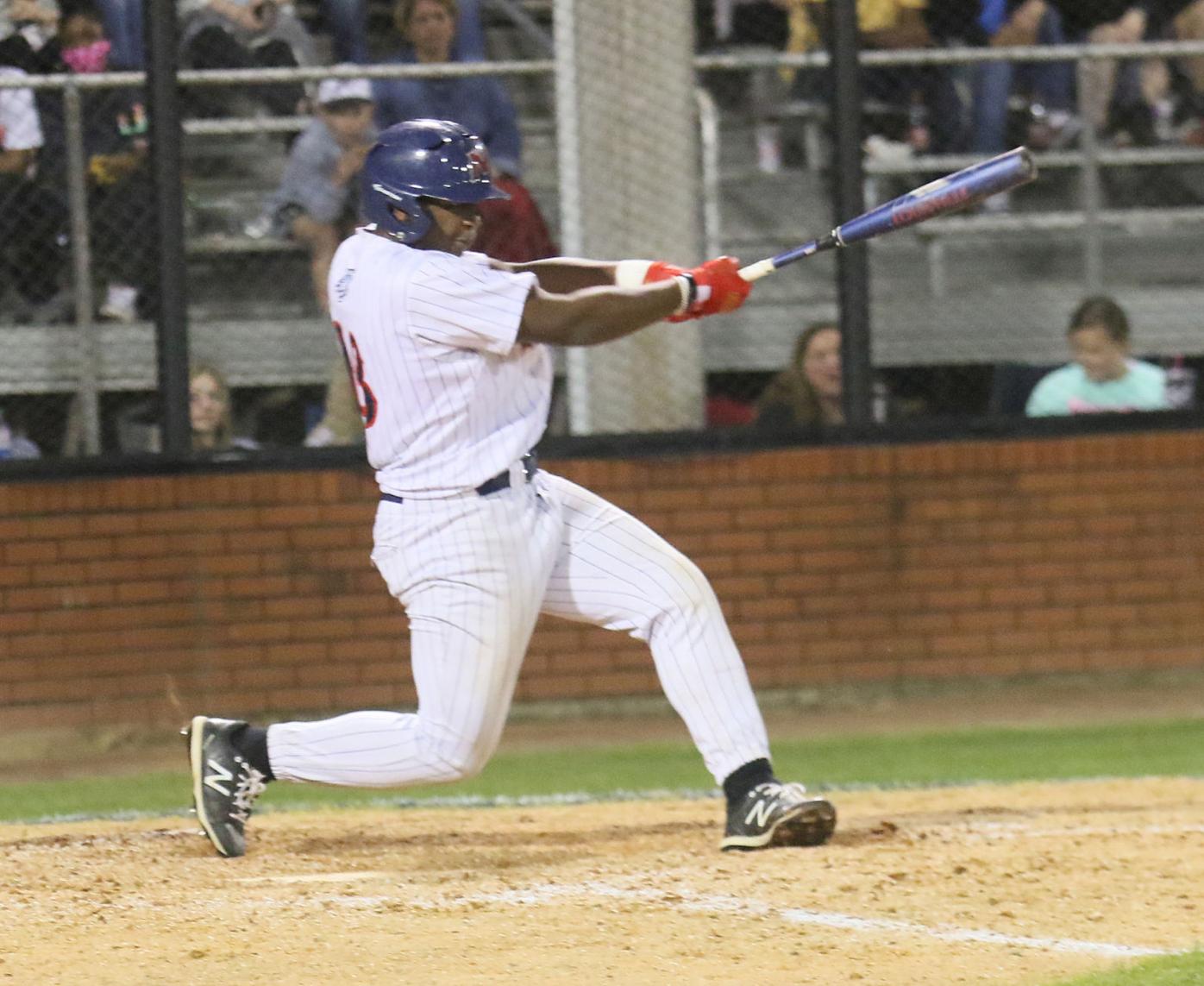 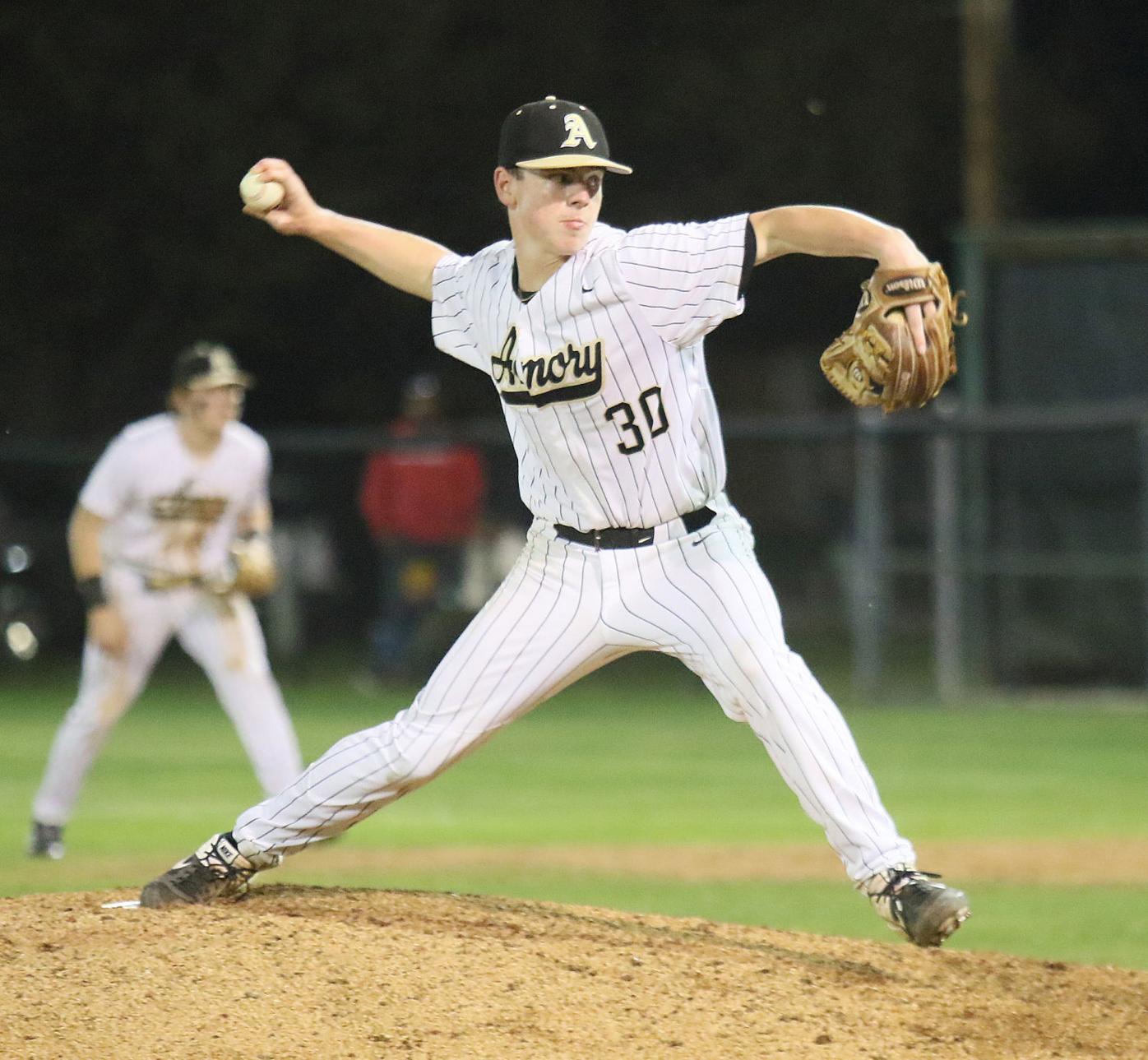 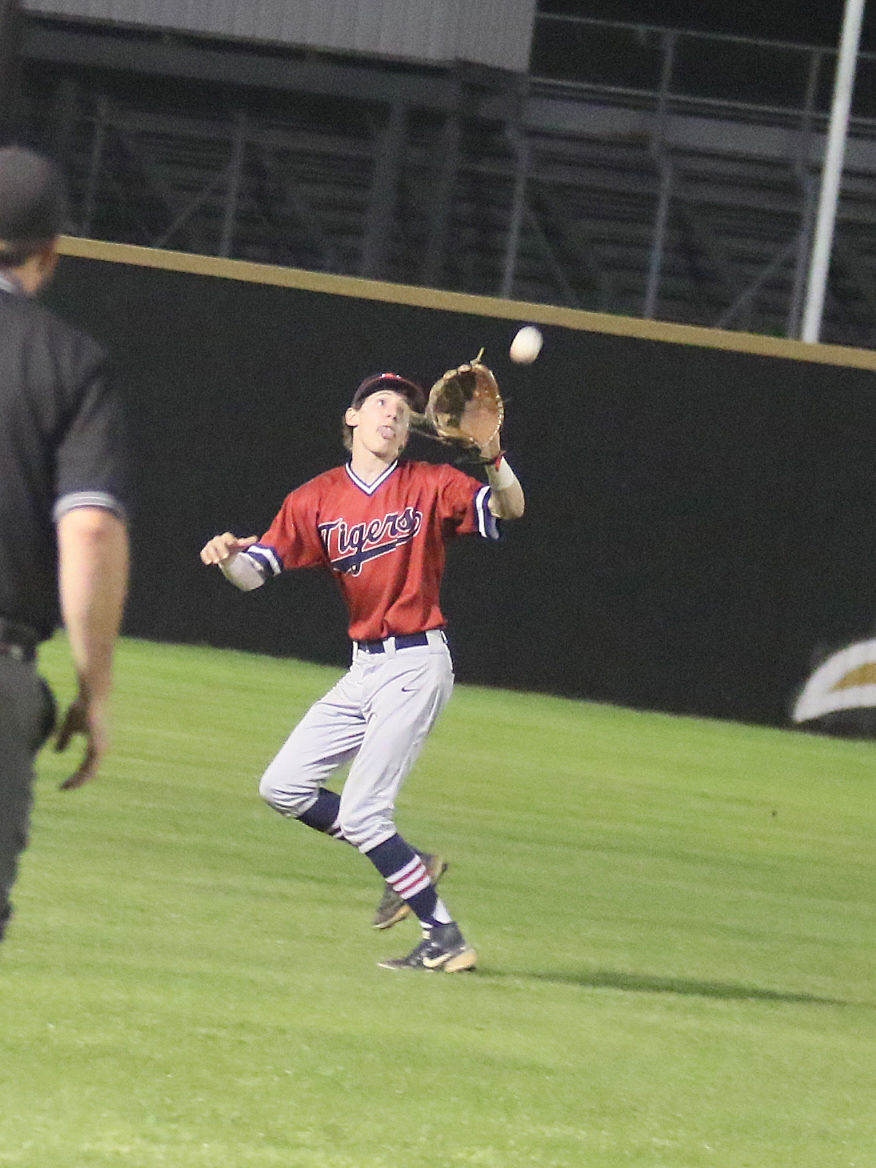 Nettleton shortstop Adam Adkins drifts out on the outfield grass to make a catch on Friday night.

Nettleton's Evan Smith celebrates smashing an RBI double to drive in the Tigers' first run of the game on Friday night.

Amory's Bo Rock gets congratulated by assistant coach Chris Pace as he rounds the bases on a two-run homer on Friday night, his third of the season.

Nettleton's Davis Oswalt picked up the win in both games - with eight shutout innings and 10 strikeouts on Monday and five innings of relief and seven strikeouts on Friday night.

Amory's Ethan Kimbrough pumps the Panthers' dugout up after his double off the wall in the ninth inning.

Nettleton's Carter Crawley had the walkoff RBI single in the bottom of the eighth to win the game last Monday night.

Nettleton shortstop Adam Adkins drifts out on the outfield grass to make a catch on Friday night.

AMORY/NETTLETON – Emotions and energy were high when Nettleton and Amory met in a huge Division 1-3A showdown this week, and the Tigers came through with a pair of extra-inning wins, 1-0 in a pitcher’s duel last Monday and 6-4 in ten innings on Friday night.

The Tigers scored four in the top of the tenth inning on the road and held off a late Amory charge to secure the sweep.

“Any time Nettleton and Amory get together, you know it’s going to be a very high level, high emotion game,” Nettleton coach Joseph Koon said. “Tip your cap because they played a heck of a game again and to our guys too for staying with it. The four-run inning was huge to give us a cushion, and it obviously feels good any time you can sweep Amory.”

Nettleton put up an early 1-0 lead in the first inning when Davis Oswalt walked with one out and Jackson Cheek singled to put two on. Evan Smith helped his own cause by smashing a double to the gap in left center to drive in the run, but Tyler Sledge worked out of the inning with a strikeout and a groundout to second.

Amory didn’t get its first baserunners until an error in each of the third and fourth innings and had a pair on in the fifth with a walk to John Isaac Wallace and the first hit of the game by Corbin Gillentine. Smith worked out of it with a pop up, and Cade Oswalt also gunned a runner down.

The Tigers threatened in the fifth but had a runner thrown out at the plate, but they were able to extend their lead in the sixth. Oswalt was hit by a pitch, and Drew Humble cashed in with two outs on a RBI double to make it 2-0.

The Panthers responded quickly, tying the game in the bottom of the inning. Hunter Jones started the rally off with a quick walk, and Reed Stanford singled to left. Bryce Glenn drew another walk and loaded the bases, and Jones was able to come home on a passed ball to score the first run.

Bo Rock reached on an error to tie the game up, and Davis Oswalt came on in relief and got a pop up and another caught stealing by Cade Oswalt to keep the game tied at 2-2.

Each team had its chances before the Tigers took the lead in the tenth. Amory got base hits from Gillentine in the seventh and Jones in the eighth and had their best chance on a leadoff double from Ethan Kimbrough that nearly cleared the wall and ended the game in the ninth.

Nettleton had its best chance with two outs in the eighth on a walk to Cheek and a single from Smith, but Jones and Oswalt each worked out of their jams with key strikeouts.

The Panthers made it interesting in the bottom of the inning. Jones and Stanford started it off with each getting their second hits of the night, but a double play killed that momentum. Rock crushed a two-run shot to left to cut it to 6-4, but a groundout to short preserved the win for the Tigers.

“Thankfully with the pitch count Davis had on Monday and the three days rest, he was able to come back and competed his tail off to give us a chance to win,” Koon said. “He didn’t have his best stuff but let his defense make a couple of good plays at the end.”

It was a pitcher’s duel in the opening game of the series as Nettleton’s Davis Oswalt and Amory’s Bo Rock battled to a 0-0 tie through seven innings.

Oswalt and the Tigers came out with the win on the mound as Carter Crawley’s walkoff single scored Jay Hawkins in the bottom of the eighth inning.

“They were hitting the ball pretty well at the beginning of the game, and I got settled down, got my nerves calmed,” Oswalt said. “I hit my spots and let my defense work. This is a huge win, and I’m glad to come out on top in this pitcher’s duel.”

Both teams had their opportunities early in the game.

Amory got a pair of one-out base hits in the first from Reed Stanford and Bryce Glenn, but Oswalt worked out of the jam with a flyout to left and a strikeout.

Clayton Reese smashed a leadoff double in the third, but a pair of strikeouts spoiled that opportunity. Oswalt limited the Panthers to just a base hit from Ethan Kimbrough in the fourth from there, retiring them in order from the fifth inning on.

Nettleton had its chances in the second and third innings. In the second, Adam Adkins laid down a bunt single with one out, and Cade Oswalt ripped a base hit after him but was thrown out trying to stretch it into a double. Rock picked up a strikeout to end the inning.

“Tip your cap to Bo Rock because that guy pitched his tail off, and obviously Davis pitched his tail off. We told them coming in that it would be a dogfight and a playoff type atmosphere,” Nettleton coach Joseph Koon said. “That’s definitely what both teams put up, and I think both teams had some great defensive plays.”

The Tigers had two runners thrown out at home in the fourth inning. Crawley singled to third with one out, and Davis Oswalt ripped a double, but Reese and Hunter Jones combined to gun Crawley down at the plate. Oswalt was also thrown out at home to end the inning trying to score on a wild pitch.

Rock settled in from there as well, just allowing a base hit from Cade Oswalt in the seventh before the Tigers grabbed the win in the eighth.

Hawkins led off the eighth with a single up the middle, stole second and third on a close play before Crawley’s shot up the middle brought him in for the win.

“I was just looking to put it in play, two-strike approach, go oppo,” Crawley said. “And I just got it done.”

“I’m proud of the guys because that was a tough at-bat with (Jay) Hawkins getting hit on the foot there and getting up, getting a hit and then stealing two bags,” Koon said. “Then Carter obviously there at the end having a great approach and hitting a hard shot up the middle. It was a heck of a job and a heck of a game tonight.”

Amory woman drowns after her SUV runs into pond