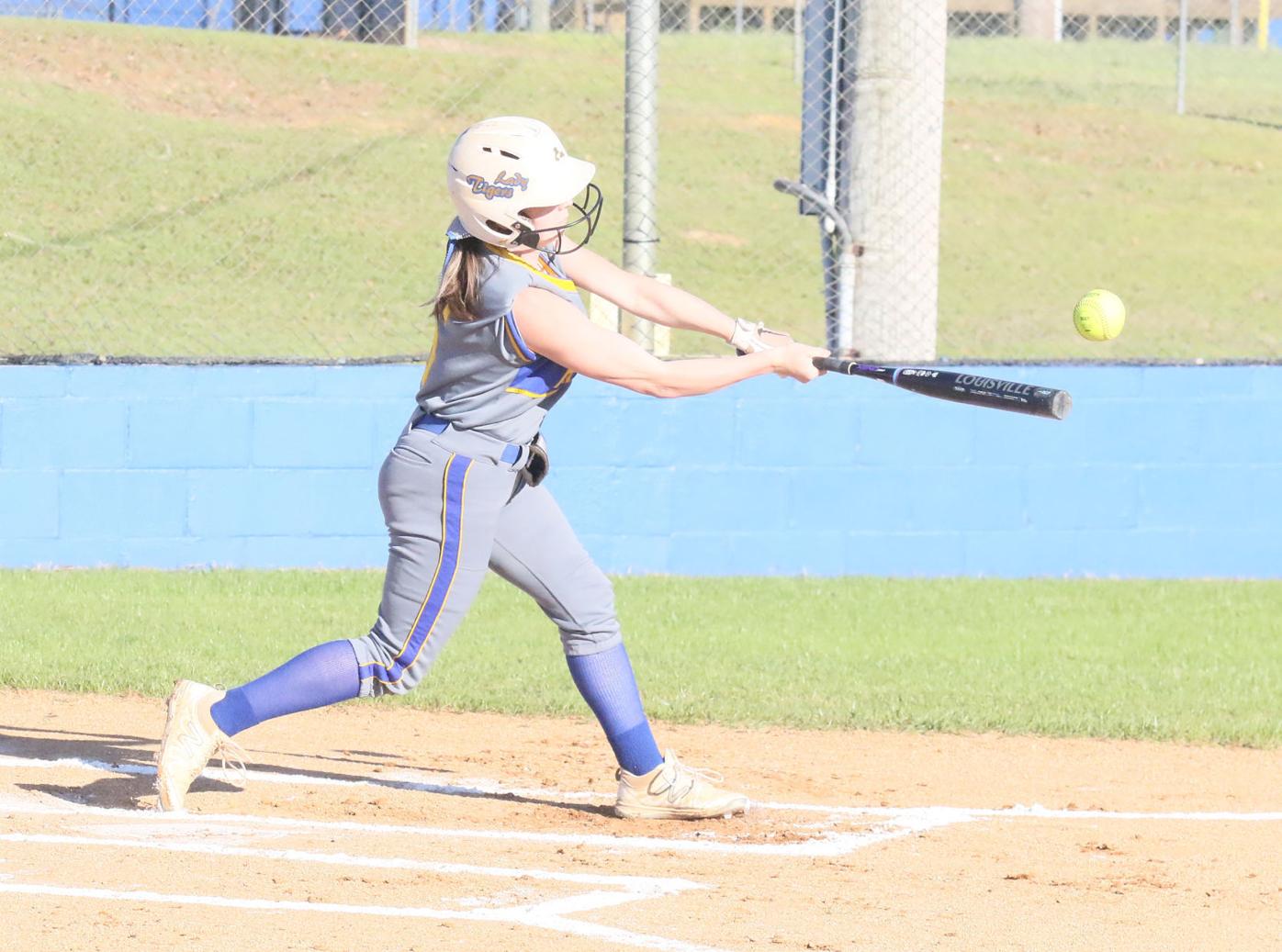 Hatley's Emma Rose Thompson gets into third safely as the ball gets away from the Noxubee County third baseman.

Hatley's Emma Rose Thompson gets into third safely as the ball gets away from the Noxubee County third baseman.

HATLEY – Hatley came up with a big inning to blow their division game against Choctaw County wide open last Tuesday night on the way to a 14-1 dominating win.

The Lady Tigers put up 10 runs in the bottom of the third to get some separation after leading just 2-1.

“We put some pressure on them, got a couple of runs there and hit the ball hard,” Hatley coach Chris George said. “We had a real good inning there and took advantage of it.”

Choctaw took advantage of a Hatley error and a base hit in the first to go up 1-0, but that would be all that Jessie McHenry would allow in the circle.

Hatley answered in the bottom of the inning with a leadoff single and stolen base from Bre Harmon. Kenlee Wilkinson drove her in with an RBI single and moved up on a passed ball, allowing Emma Rose Thompson to give the Lady Tigers the lead with a sacrifice fly.

The Lady Tigers sent 14 to the plate in the bottom of the third to strike for their big inning.

Wilkinson started it off with a one-out triple, and Thompson picked up another RBI with her second sac fly. Brooklyn Mohler started it off again with a double, and McHenry’s RBI single made it 4-1.

Bella Oliver was hit by a pitch to put two on, and Chloe Wilbanks sent both runners home with a two-run single. Marleigh Cockrell’s single put runners on the corners, and Wilbanks raced home on a steal.

Cheyenne Bowen drew a walk, and Harmon reached on an error to load the bases as Wilkinson reached on a passed ball to send another run in. Thompson made it a four-RBI night with her two-run single to push the lead to 11-1, and Mohler smashed her second double of the inning to plate Thompson.

“Brooklyn had a couple of really good hard hits, and (Emma) Rose hit the ball hard three or four times,” George said. “Kenlee had a big hit off the wall.”

Hatley finished the win off with two runs in the bottom of the fourth on Harmon’s two-RBI double after Bowen’s base hit, Wilbanks’ fielder’s choice and Oliver reaching on an error.

McHenry surrendered an unearned run on four hits, no walks and striking out seven.

“We made an error the first batter of the game to give up that one run, but Jessie didn’t let it bother her,” George said. “She got in there, grinded it out and had a great game. She’s just gotten better every outing, and that’s what we want to see at this point in the year.”

Hatley cruised through a pair of division wins against Noxubee County, 20-0 and 25-0, with Peyton Wilkinson and Brooklyn Mohler picking up the wins.

Amory woman drowns after her SUV runs into pond