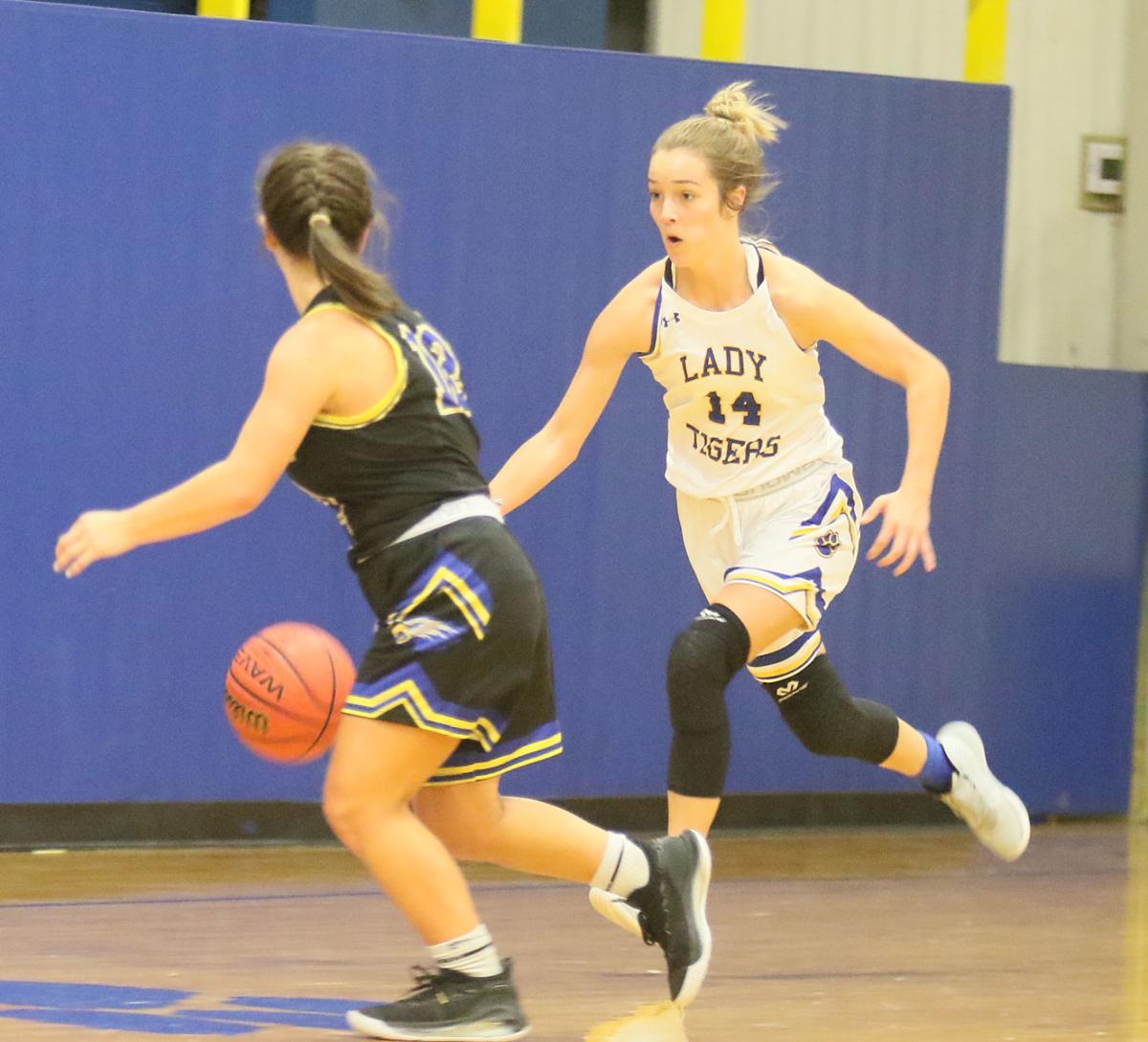 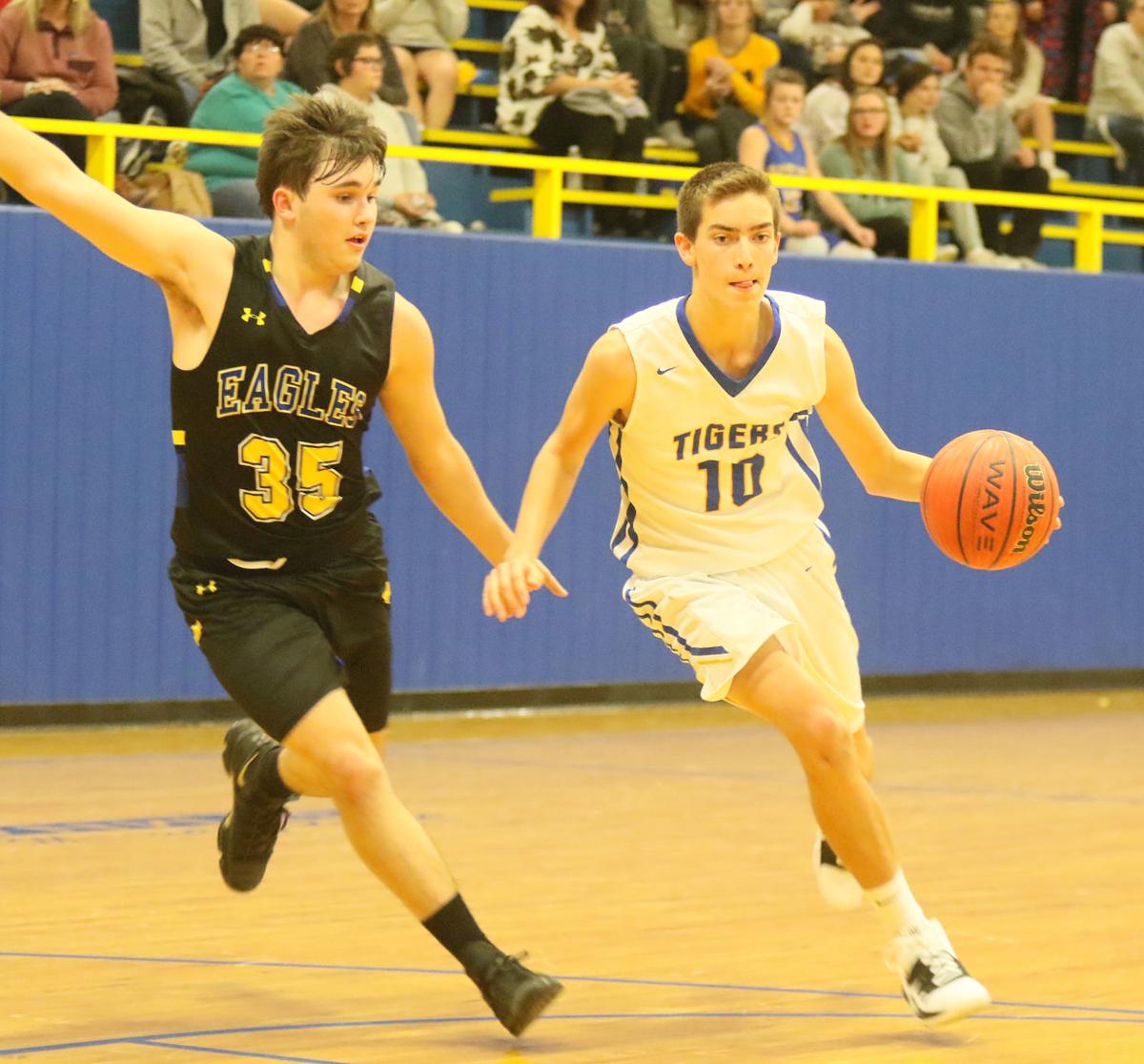 Hatley’s Luke Moffett was the leading scorer against both Blue Mountain and Tremont. 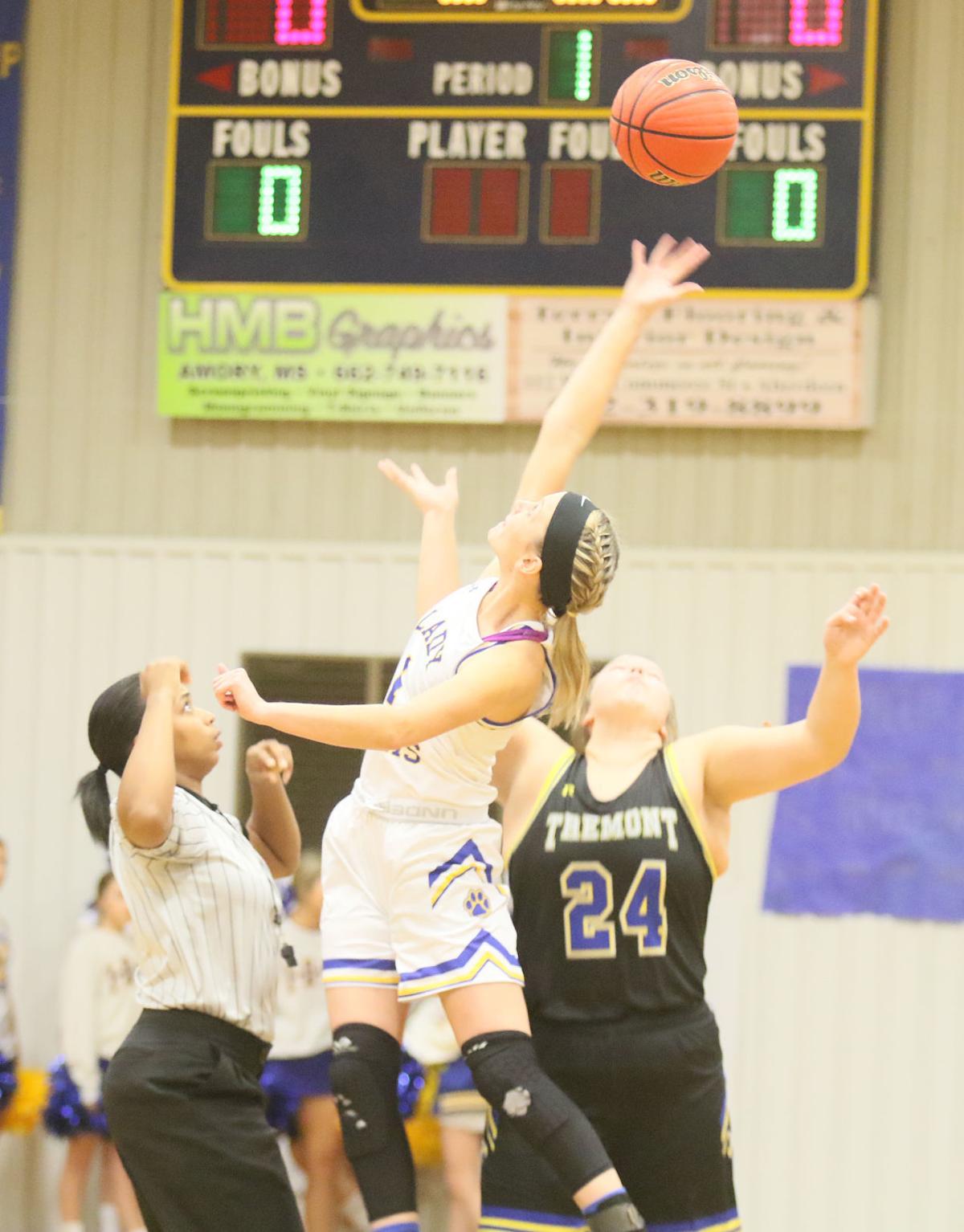 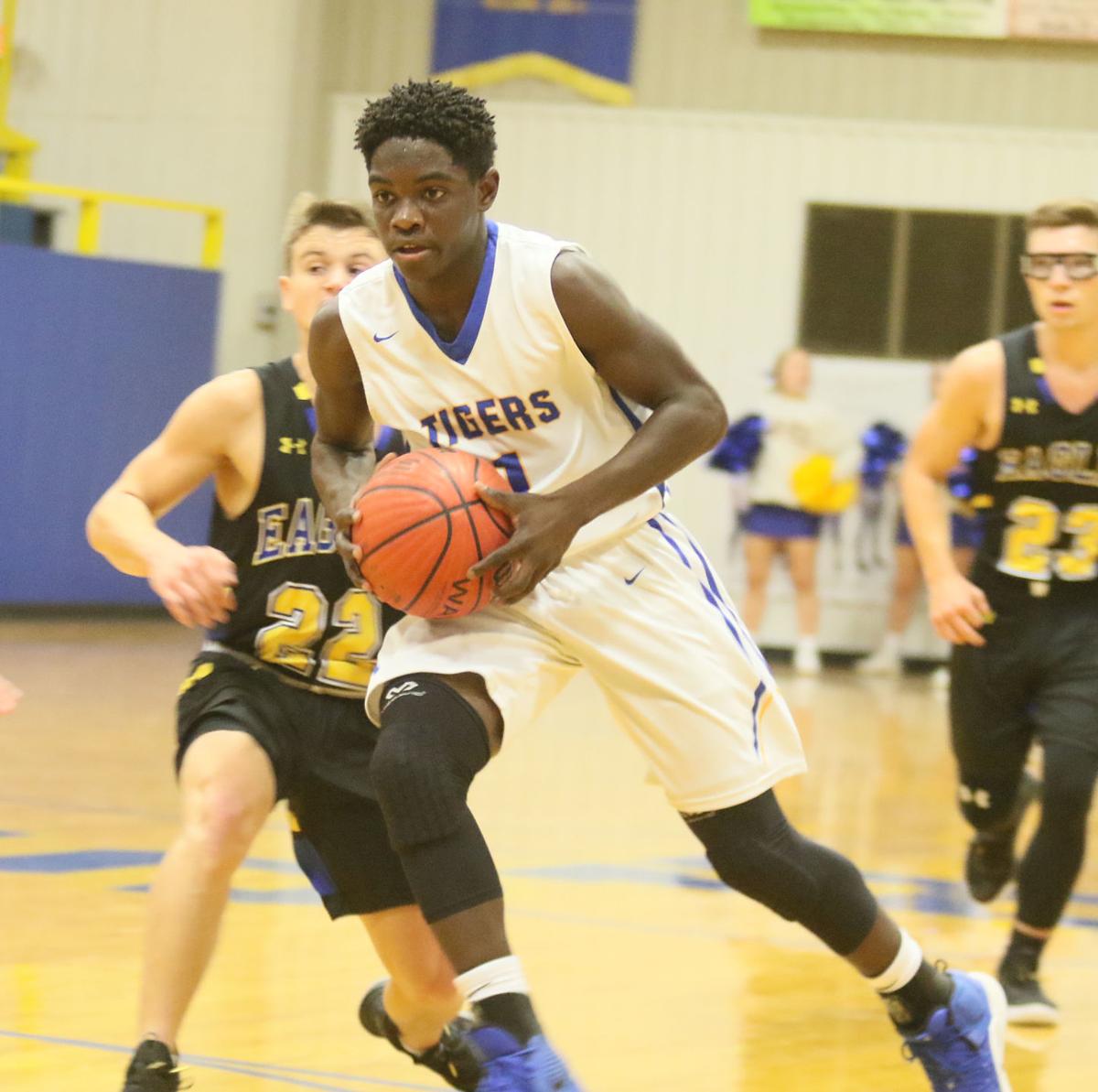 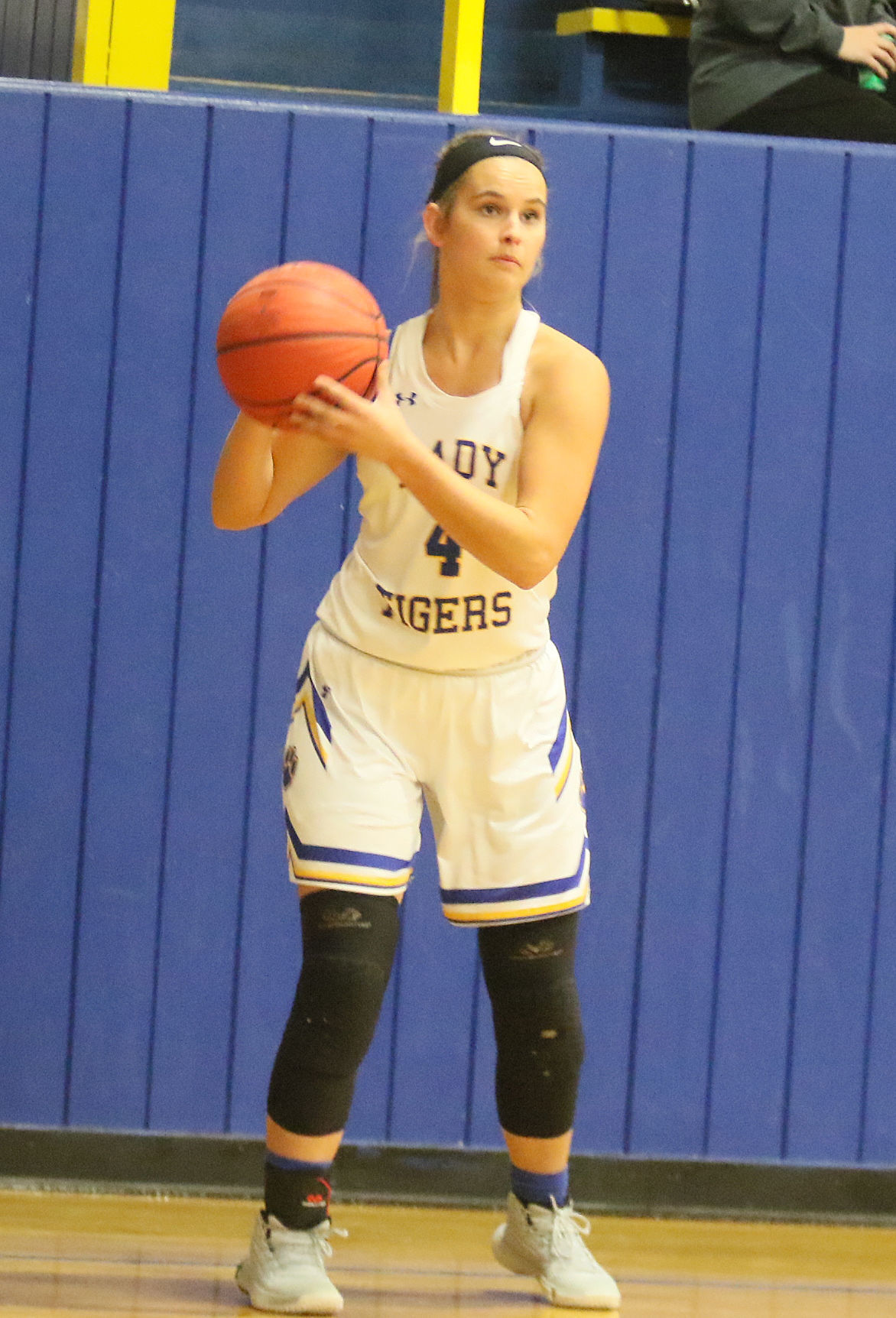 Hatley's Sydney Elkin hit a pair of threes and finished with 10 points.

Hatley’s Luke Moffett was the leading scorer against both Blue Mountain and Tremont.

Hatley's Sydney Elkin hit a pair of threes and finished with 10 points.

HATLEY – The Hatley Lady Tigers dominated from beginning to end last Tuesday night against Tremont, holding the visitors to just four points in a 53-4 victory.

It was the Lady Tigers’ first win after losses to Vardaman and Blue Mountain.

“I saw a lot of positive things that we have missed the last two games. Last night with Blue Mountain, we lost by seven, which was a tough loss against a good team,” Hatley coach Ginger McAlester said. “Our goal this year we decided is we have to finish the game, and we can’t just play the first and second quarter. We have to start playing third quarter, fourth quarter and finish, and we did that tonight.”

Sydney Elkin drained a three to open the game, and Emilee Slade made back-to-back trips to the basket to make it 7-0 quickly. The Lady Eagles got on the board by a free throw, but Elkin hit another three and Slade and Tara Robertson stretched it to 17-2.

The Lady Tigers got to the line three times to end the first quarter with Slade, Elkin and Robertson all going a perfect 6 for 6 to go up 25-1 at the end of the quarter.

In the second quarter, Peyton Wilkinson, Madison Mitchell, Brooklyn Owen and Lexi Miller added points off the bench to make it 35-2 at the half.

Slade and Emma Rose Thompson opened the third with baskets, and Robertson took a steal to the hoop on back-to-back possessions. Elkin put in an easy basket to go up 45-2 at the end of the quarter.

“Tara had a big night defensively with all her steals. She drives so well because she steals so much,” McAlester said. “I tell her that if she will shoot and make her free throws, she will have 10 points every game.”

McAlester emptied her bench again for the fourth, and Owen, Miller and Kenlee Wilkinson made contributions in the final quarter.

Slade led the way with 14 points, while Robertson added 11 and Elkin chipped in 10 points to put three in double figures.

“Everybody worked hard and worked well together, and they executed every play,” McAlester said. “That’s something that comes with us being together for three years. I was proud of them. It wasn’t a great team, but we didn’t regress like we did last year, and we didn’t start from scratch like we did when I first started. We picked up where we left off at the end of the year last year.”

The Tigers opened the game on a 10-0 run but saw Tremont come back in the final three quarters, including holding Hatley to just six second-half points.

Markhel Hunt opened the run in the first quarter with a layup, and Parker Easter added a three and a jumper and Luke Moffett also sank a three to go up 10-0.

The Eagles scored the final four points to make it 10-4 at the end of the first.

They continued the run with the first bucket of the second, but Moffett answered with his second three. Tremont cut it to 13-11 at the half.

The Eagles went on a 10-0 run to start the third and take the lead for good, and Hunt fed Moffett under the basket to finally break Hatley’s drought. Tremont ended the third on a 10-3 run with Hatley’s only points coming on Conner Powell’s three to make it 31-18 at the half.

Tremont continued to pour it on in the fourth with 18 more points, and the Tigers were only able to get a free throw from Hunt in the final quarter. Moffett finished as Hatley’s leading scorer with eight points.