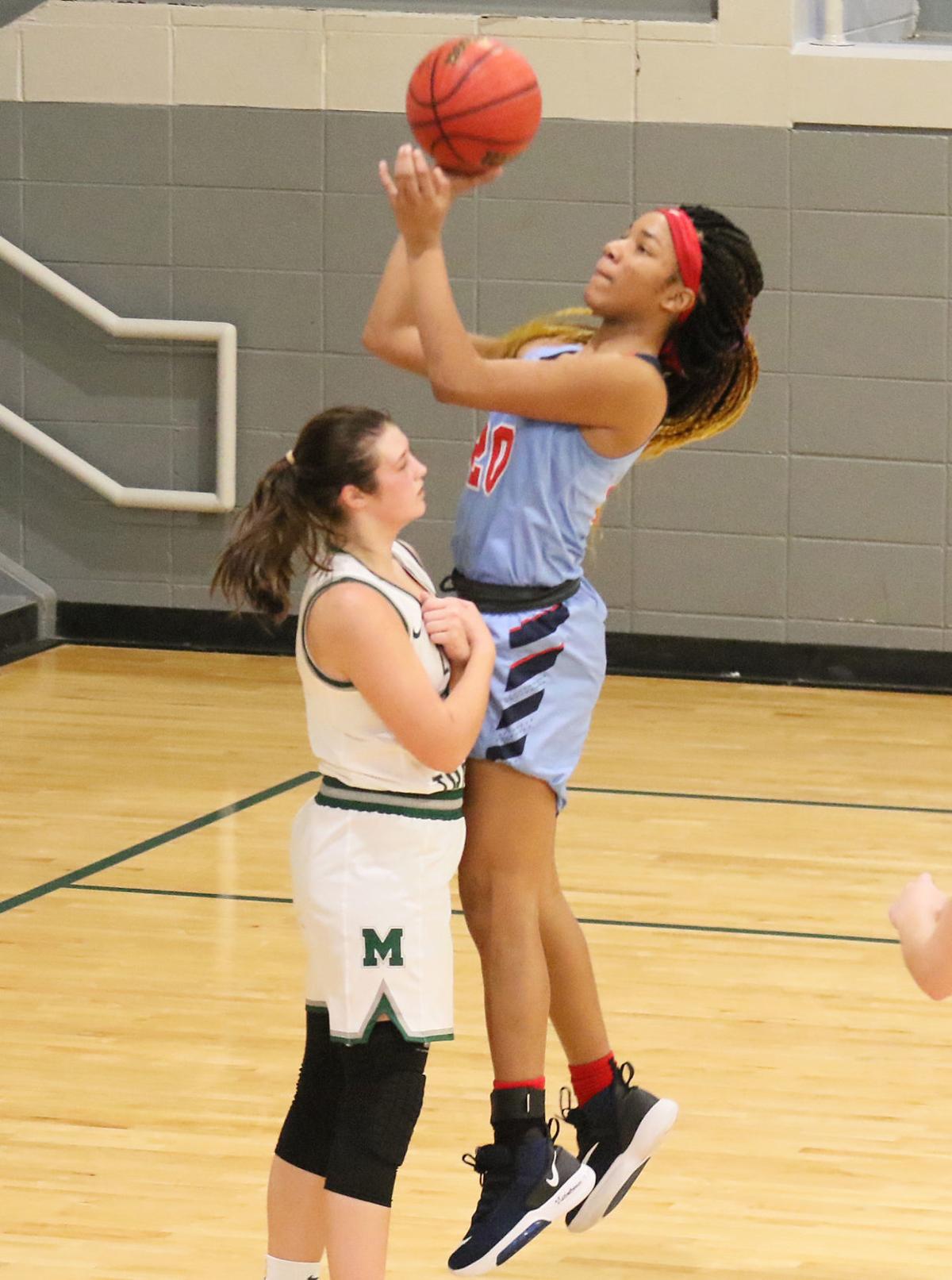 Nettleton's Madison Miller led the way with 16 points against Mooreville on Friday night. 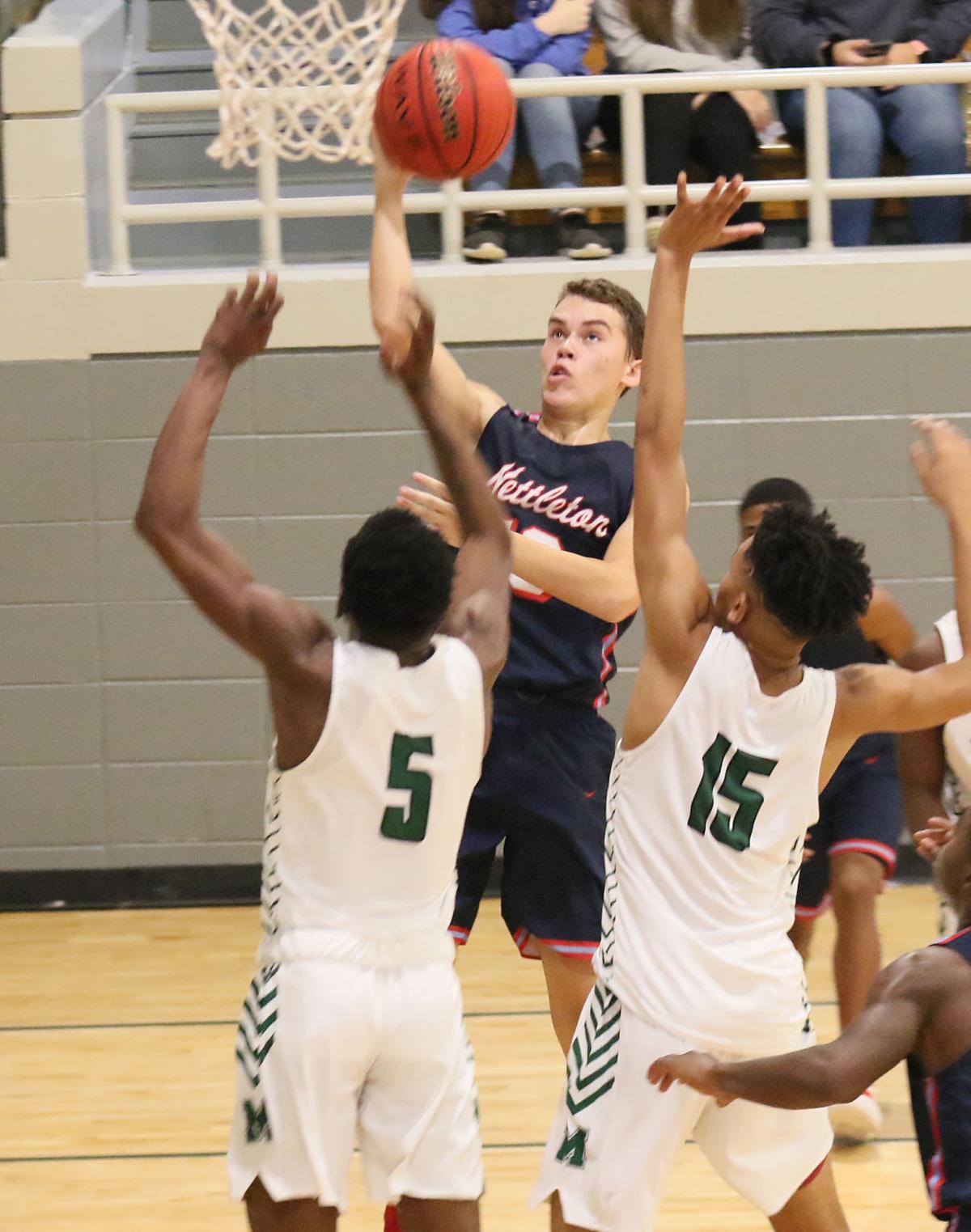 Nettleton’s Graham Gardner puts in a layup in the fourth quarter against Mooreville. 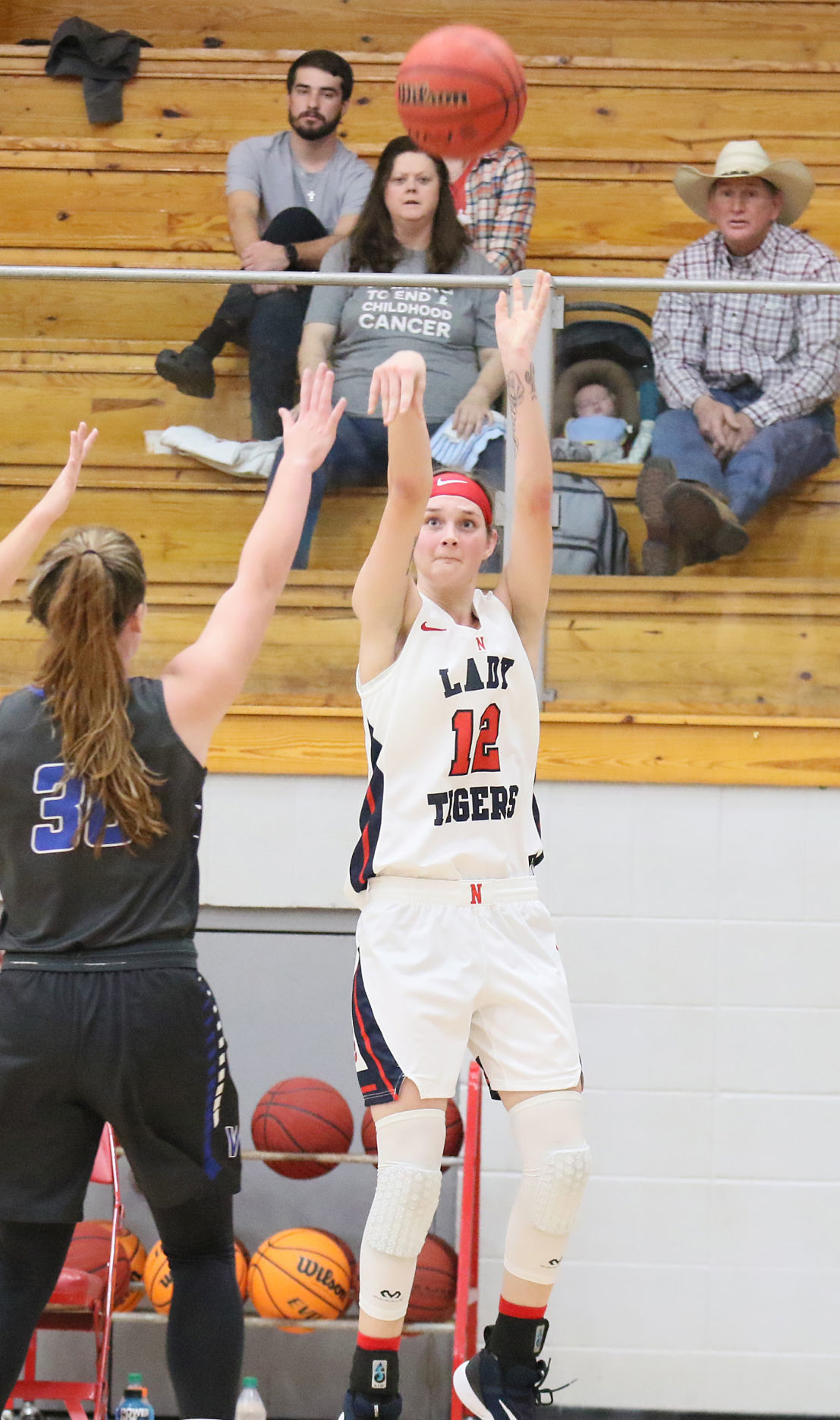 Nettleton’s Faith Collier shoots a three-pointer against Vardaman at the Wheeler Tournament. Collier was the leading scorer with 16 points in the win. 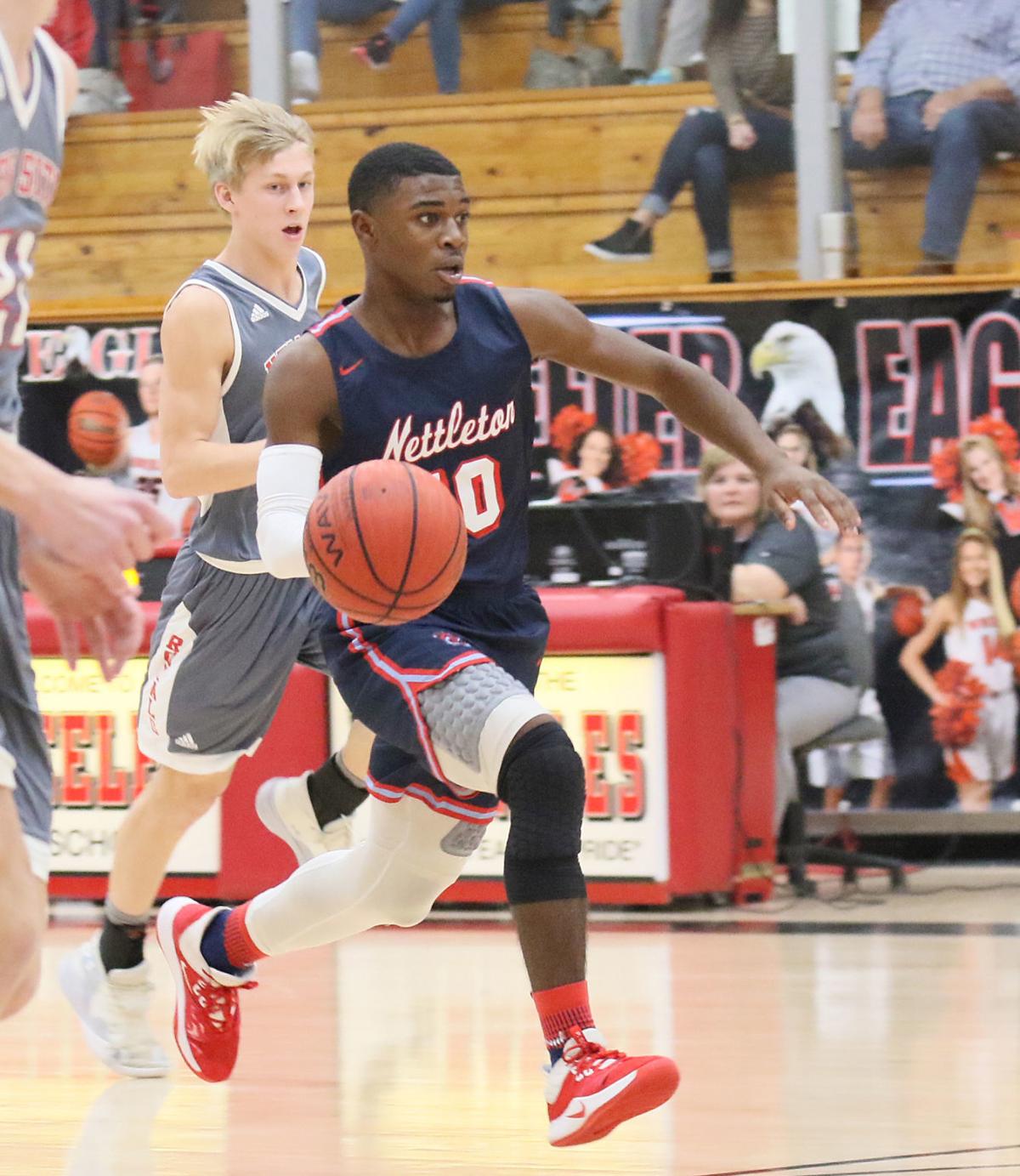 Nettleton’s Jacorien Moore gets ahead of the New Site defense for a basket at the Wheeler Tournament.

Nettleton's Madison Miller led the way with 16 points against Mooreville on Friday night.

Nettleton’s Graham Gardner puts in a layup in the fourth quarter against Mooreville.

Nettleton’s Faith Collier shoots a three-pointer against Vardaman at the Wheeler Tournament. Collier was the leading scorer with 16 points in the win.

Nettleton’s Jacorien Moore gets ahead of the New Site defense for a basket at the Wheeler Tournament.

MOOREVILLE – The Nettleton Lady Tigers lost the opportunity for a win in regulation against their county rival Mooreville but picked it back up in overtime for a 43-32 victory on Friday night.

The Lady Tigers outscored the Lady Troopers 11-0 in overtime to seal the win.

“We missed a defensive assignment in the last few seconds of regulation, maybe thinking we had it won,” Nettleton coach Shane Hayles said. “We came out in the second half and made some good adjustments, and then we had the good run to start overtime. We know it wasn’t the best thing to pay to come watch in the first half, but from our perspective, we were ahead at the half and just wanted to get a win.”

In a low-scoring first half, Mooreville led 5-3 at the end of the first, and Nettleton carried the 9-8 lead into the locker room at halftime. Annalyn Housley’s three accounted for Nettleton’s lone points in the first, and Madison Miller, Faith Collier and Miah Hall led a 6-0 run to end the second to push ahead.

The Lady Troopers hit a three to open the third and reclaim the advantage, but Miller answered with a pair from the line to tie it. The two teams continued to go back and forth, with Mooreville leading 23-19 at the end of the third.

Collier and Hall started the Lady Tigers off with an 8-0 run to open the fourth, including Collier’s three-pointer, to go up 27-23. Mooreville answered quickly to tie the game, but Hall at the free-throw line and Nakira Gillard with a steal and a basket put Nettleton back up. Hall hit a free-throw with just 12 seconds to go to try to ice the win in regulation, but the Lady Troopers scored as time expired to force overtime.

Miller led three Lady Tigers in double figures with her 13 points. Collier and Hall chipped in 11 points each.

“Getting Tamiya Martin back from injury tonight was big, and she gave us some good minutes,” Hayles said. “Madison (Miller) established herself in the post in the third quarter, and that’s when we started making a little push and getting ahead. Miah (Hall) ended up scoring nine in the fourth quarter, and Nakira (Gillard) had a big two late. I’m proud of the girls because they are working hard and doing what we’re wanting them to do. We’re making strides, and I’m optimistic.”

The Lady Tigers also picked up a 48-34 win over Vardaman last Friday afternoon at the Wheeler Christmas Tournament. Collier led the way with 15 points in that win, followed by 13 from Hall and 10 from Miller.

Nettleton led by double digits most of the game but had to fight off a Vardaman comeback midway through the fourth.

“We played them the first game of the year and had the lead at the half and then lost. I told them at the half that we didn’t want to repeat that one,” Hayles said. “They have been looking at this game as redemption. Vardaman made a run, and we finally got the lead back up and regrouped to hold them off. It was a big day for us considering we only had seven people with a few out with the flu and stomach bug. The girls stepped up to that challenge and didn’t get in foul trouble early, and we had some all-around good efforts.”

The Lady Tigers took their only loss of the Christmas break last Saturday in the Pool A championship game of the Wheeler Tournament, 34-26 to host Wheeler.

The Tigers fell behind 30-14 at the half but battled back in the third and fourth quarters to make a game of it on Friday night.

Nettleton trailed just 11-9 at the end of the first with Zavian Dilworth, Dedrick Johnson and Jacorien Moore contributing points. They were held to just five in the second with Dilworth doing all the scoring.

The Tigers started the third quarter on a 9-1 run, cutting it to 31-23. Dilworth had another three points, while Johnson, Moore and Graham Gardner also helped close the gap. Mooreville finally got going in the third and was able to widen their advantage to 40-27 at the end of the quarter.

The Troopers started off the fourth with a quick 4-0 run before back-to-back buckets from Moore and Keandre Johnson ended Nettleton’s drought. Gardner scored seven straight points midway through the period, including a three-point play, that helped the Tigers close to within 45-39, but the Troopers were able to ice the win in the final few minutes, despite Nettleton baskets from Moore and Keylin Ruff.

Moore was Nettleton’s leading scorer with 14 points, followed by 10 from Dilworth.

Nettleton dropped both games at the Wheeler Tournament with a 65-54 loss to New Site last Friday and a 65-39 loss against Smithville.

Against New Site, Ruff led the way with 15 points, while Keandre Johnson finished with 13. Against Smithville, Gardner had 10 points.