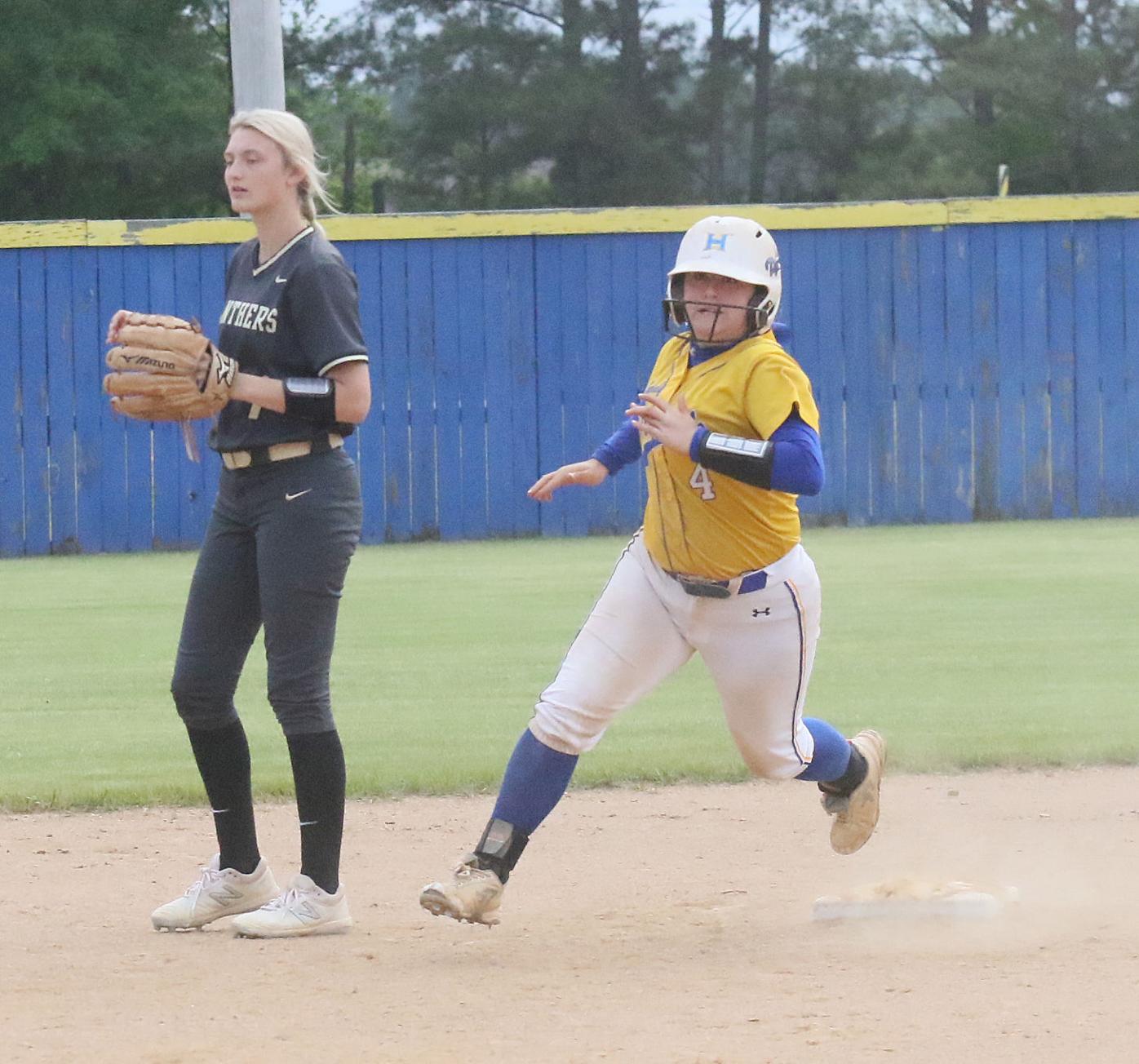 Hatley's Bre Harmon heads into second base on one of her two doubles in Game 2 against Amory on Friday night. 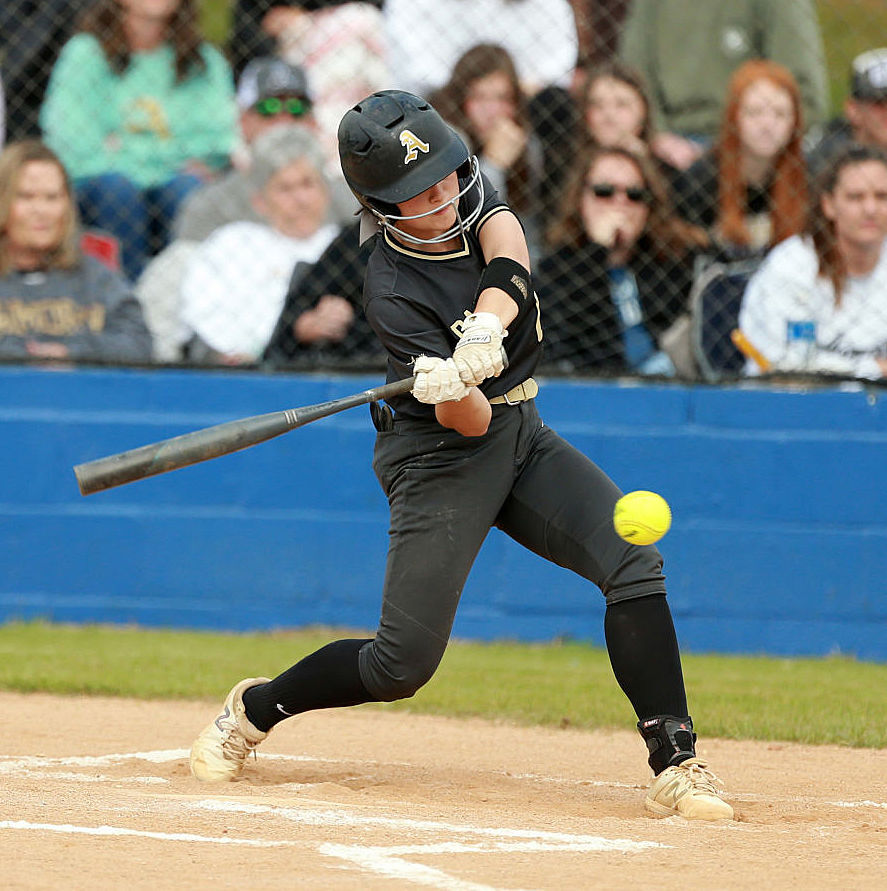 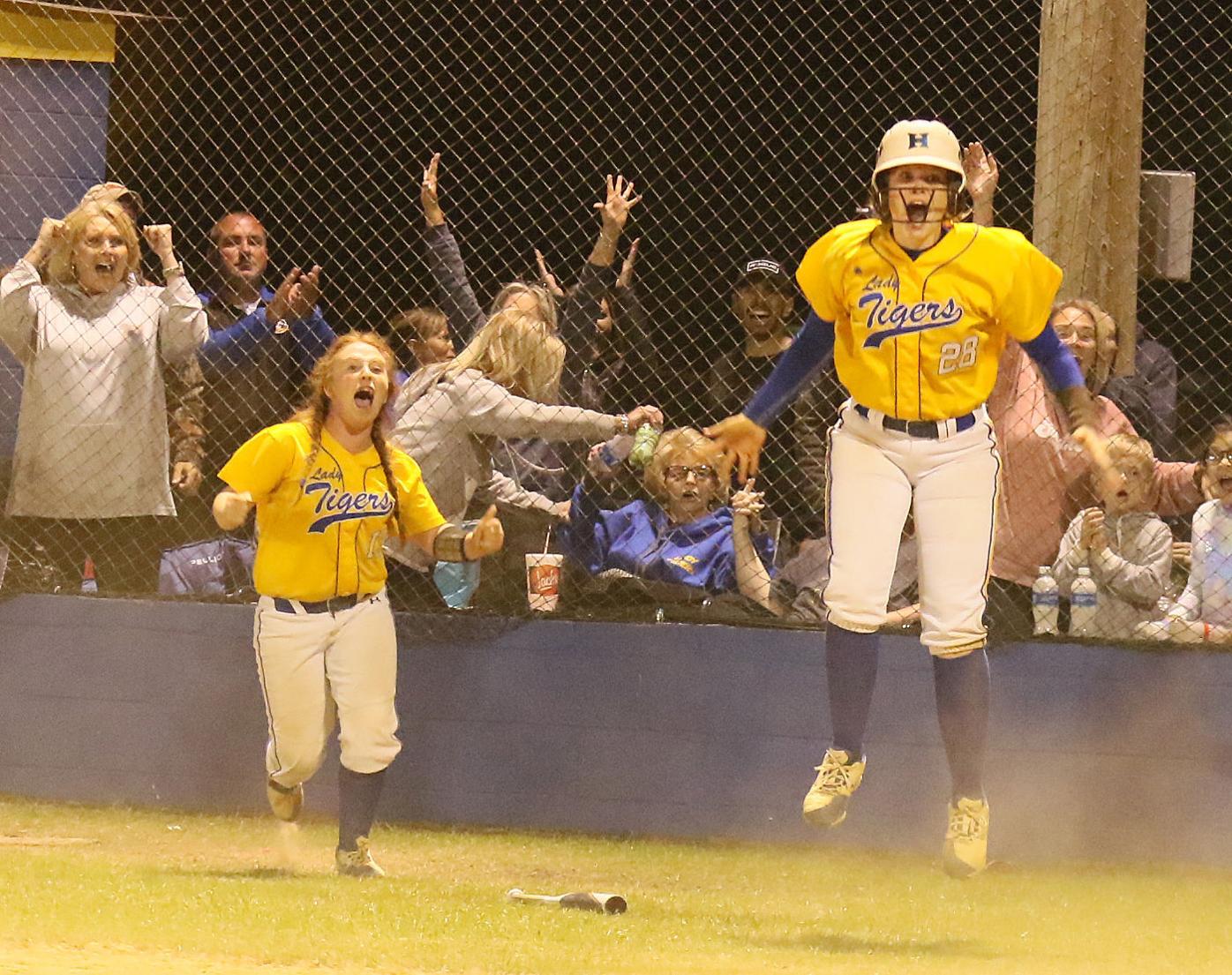 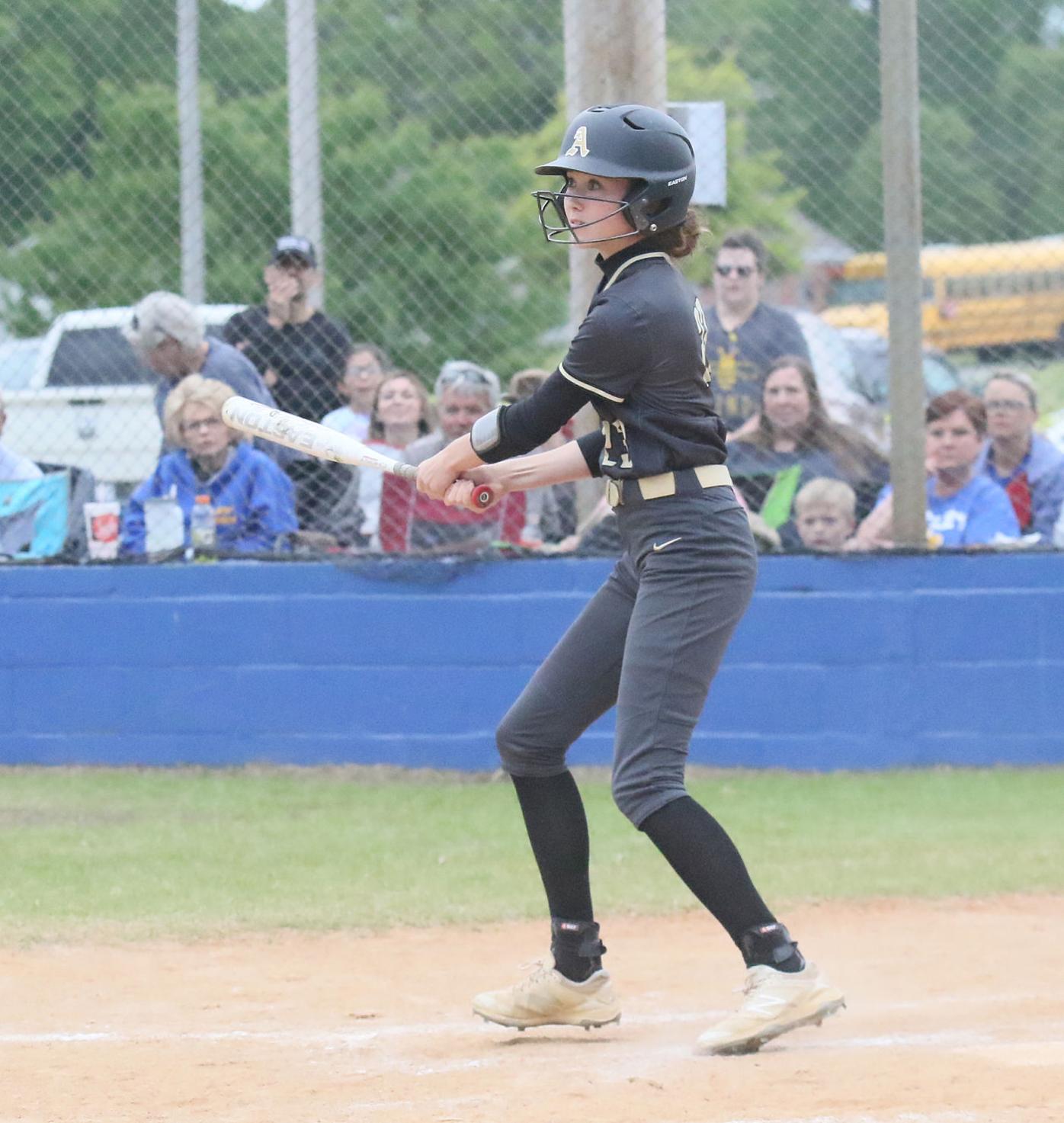 Amory's Laney Howell had the walkoff hit in Game 1 and three hits in Game 3. 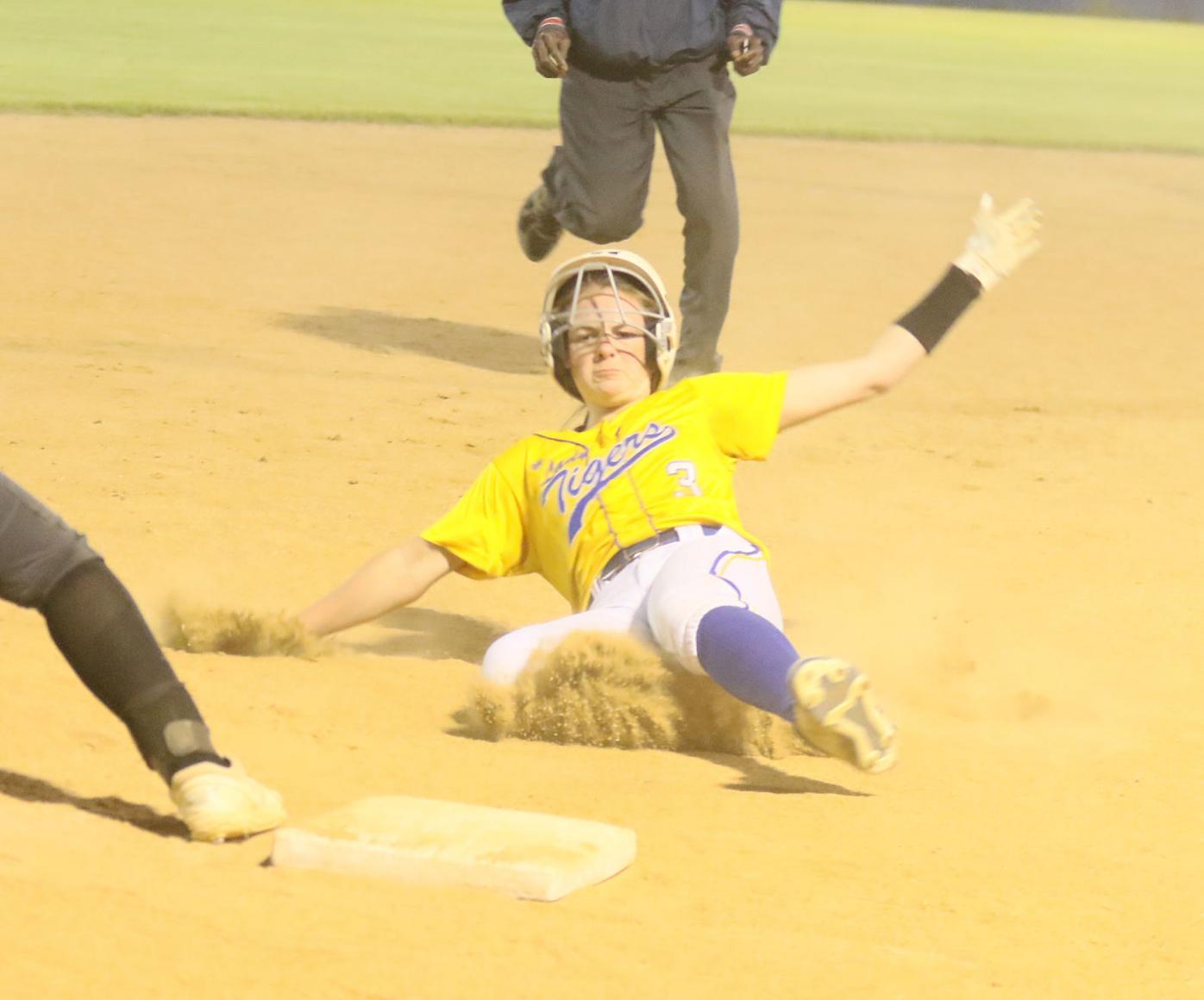 Hatley's Kenlee Wilkinson slides into third with her two-run triple in the fifth inning of Game 3. 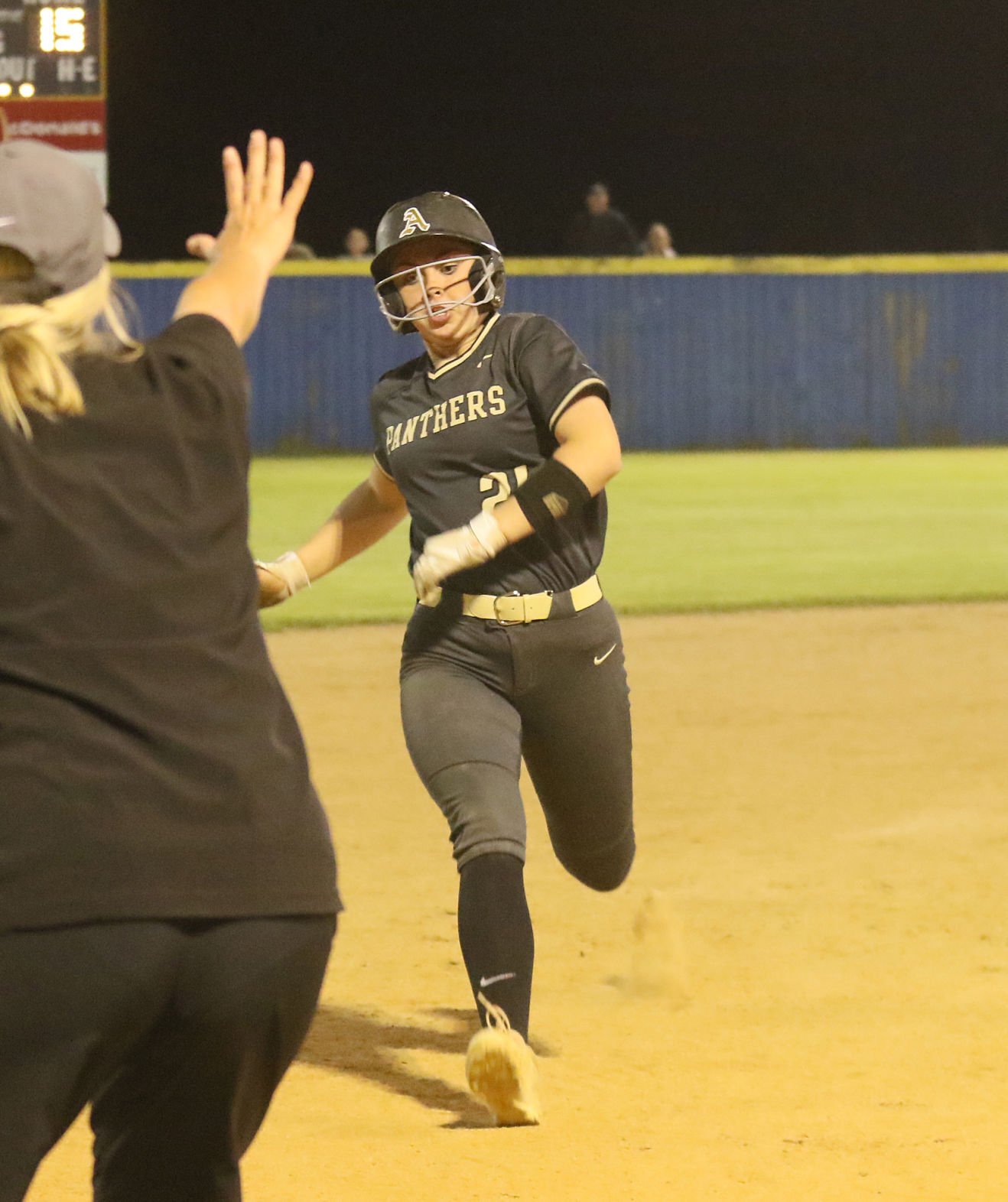 Amory's Ella Phillips heads into third on an RBI triple that gave the Lady Panthers the lead in the top of the seventh of Game 3. 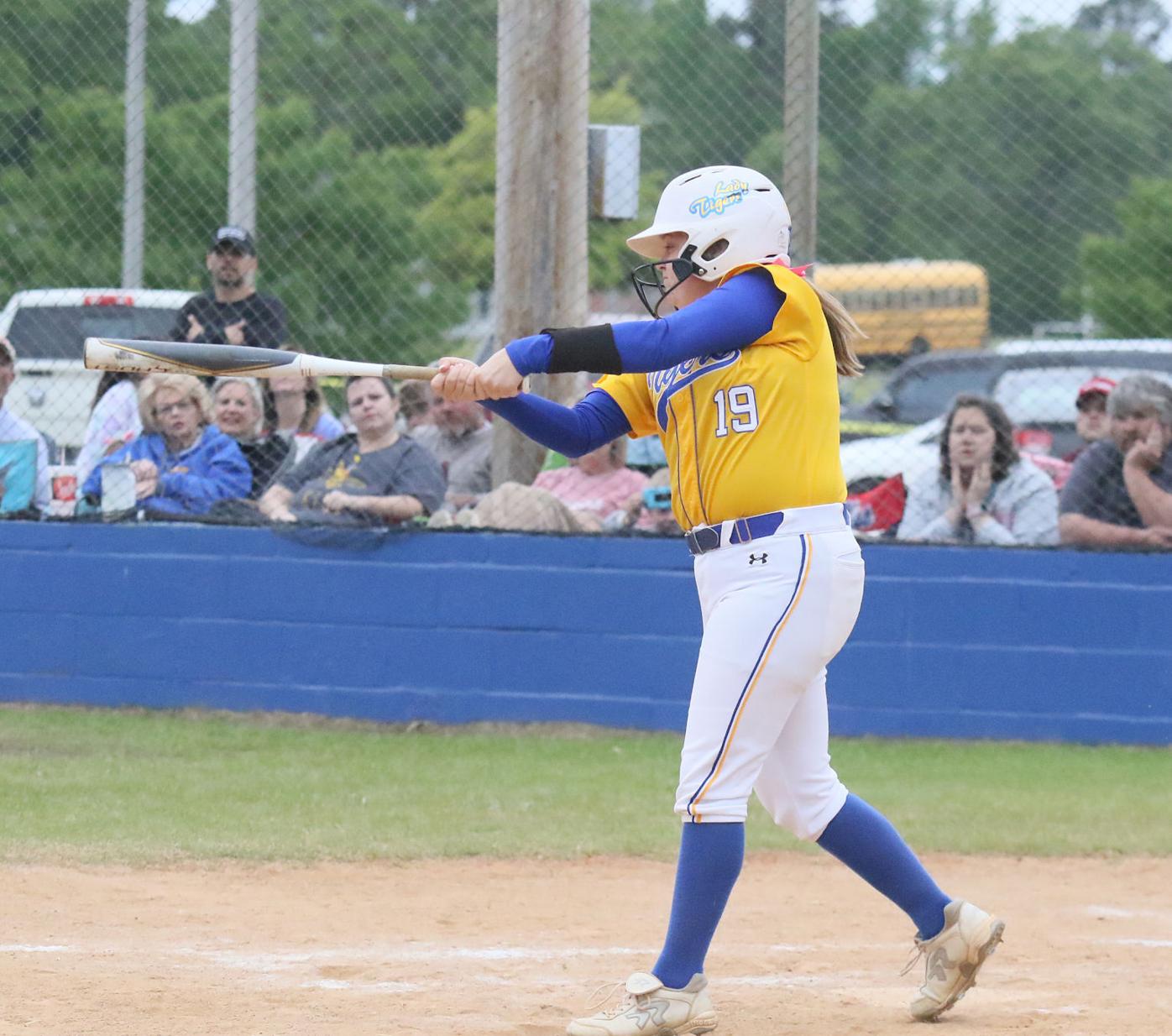 Hatley's Gracie Long had a pair of hits in both games on Friday night.

Hatley's Bre Harmon heads into second base on one of her two doubles in Game 2 against Amory on Friday night.

Amory's Laney Howell had the walkoff hit in Game 1 and three hits in Game 3.

Hatley's Kenlee Wilkinson slides into third with her two-run triple in the fifth inning of Game 3.

Amory's Ella Phillips heads into third on an RBI triple that gave the Lady Panthers the lead in the top of the seventh of Game 3.

Hatley's Gracie Long had a pair of hits in both games on Friday night.

HATLEY – Hatley had a pair of comebacks at home in store on Friday night as they trailed in the play-in round of the Class 3A playoffs.

Amory walked it off on Thursday night to take Game 1, 9-8, but the home team came through again on Friday as Hatley won 11-5 and 17-16, coming from behind in both to take the series. They advanced to play Senatobia in the first round.

“This just shows to the character of this team,” Hatley coach Chris George said. “We’re two separate teams, and tonight, we were the good team. We came out and didn’t quit, and we were down by seven runs in that last game. That just shows the character that we have.”

Both teams came out firing in the first inning of Game 3 as Amory scored three and Hatley scored five.

The Lady Panthers’ first inning was highlighted by run-scoring hits from Reese Griffith and Laney Howell.

In the bottom of the inning, Emma Rose Thompson and Jessie McHenry each hit RBI singles up the middle, and Gracie Long drove in a pair with her base hit. Bre Harmon received the first of three intentional walks, which drove in the fifth run of the frame.

Amory found its offense, scoring in each of the next three innings to start to get a good lead. Macie Williams scored on a wild pitch in the second, while Griffith’s groundout to third and Karsen Sanders’ RBI single to right gave Amory a 6-5 lead.

The Lady Panthers extended that to 10-5 with four in the third as Ella Phillips, Emma Pinkerton, Maggie Kate Cummings and Griffith all drove in runs.

Two more Amory runs came in during the top of the fourth before Hatley started its first comeback as Cummings’ third hit made it 12-5.

The Lady Tigers started going with two in the bottom of the inning, taking advantage of three Amory errors.

The top of the fifth was the only inning Amory didn’t score a run, and Hatley cashed in with eight in the bottom half to go up 15-12.

The Lady Tigers sent 12 to the plate and took advantage of three straight Amory errors but also had several key hits. Thompson and Mohler smoked back-to-back RBI doubles after the errors, and Harmon came through with an RBI single to take the lead in one of her only at bats of the game.

Kenlee Wilkinson’s two-run triple was the big hit of the inning.

“Bre was killing it so they started putting her on,” George said. “Kenlee stepped up and started hitting the ball in the second game, and that was the difference in the game.”

Amory cut it to 15-13 on another Cummings hit, her fourth of the night, and held Hatley in the bottom of the inning. The Lady Panthers went back on top, 16-15, in the top of the seventh as Phillips’ triple retook the lead.

“We knew it was going to be tough,” Amory coach Jessica Seger said. “We came back after losing Game 2 and jumped up on them, and then we had those costly errors. Our whole thing has been never give up, and I’m very proud of this group. We came up a little short, and we don’t lose anybody from this team.”

Down by one with the bottom of the lineup up, Hatley rallied quickly. Long was hit by a pitch to start it off, and Marleigh Cockrell put two on with her base hit. Pinch runner Cheyenne Bowen came home on Kenlee Wilkinson’s RBI single to tie it up after Harmon was intentionally walked again, and Zoey Horne, running for Cockrell, raced home on a wild pitch for the winning run.

“Our eight and nine hitters started it off, and everyone else followed suit like they were supposed to,” George said. “When we got the first two on, I felt like it was ours at that point.”

Hatley tied the game in the bottom of the fourth and scored three in each of the fifth and sixth innings to take the win.

Amory led 5-1 after the top of the fourth. In the first, Sanders and Howell had RBI hits to make it 3-0, and Hatley cut into that with a double play that scored a run after Harmon and Wilkinson’s back-to-back hits.

Cummings’ RBI double and Williams’ RBI single made it 5-1 in the fourth, but the Lady Tigers tied the game with four in the bottom of the inning. Harmon’s double cleared the bases and tied the game at 5-5.

Peyton Wilkinson had a run-scoring single in the fifth, while Thompson’s double and Mohler’s single drove in runs in the fifth.

Peyton Wilkinson picked up the win in the circle.

The Lady Panthers trailed 8-5 going into the bottom of the seventh and came back to score four, winning it on Howell’s walkoff RBI single. Griffith also hit an RBI double in the rally, and Sanders, Emarie Boddie and Simmons also had two hits each for the Lady Panthers. Boddie hit a triple and Phillips a double.

Hatley got three hits from McHenry and two hits each from Mohler, Peyton Wilkinson, Wilbanks, Long and Cockrell.