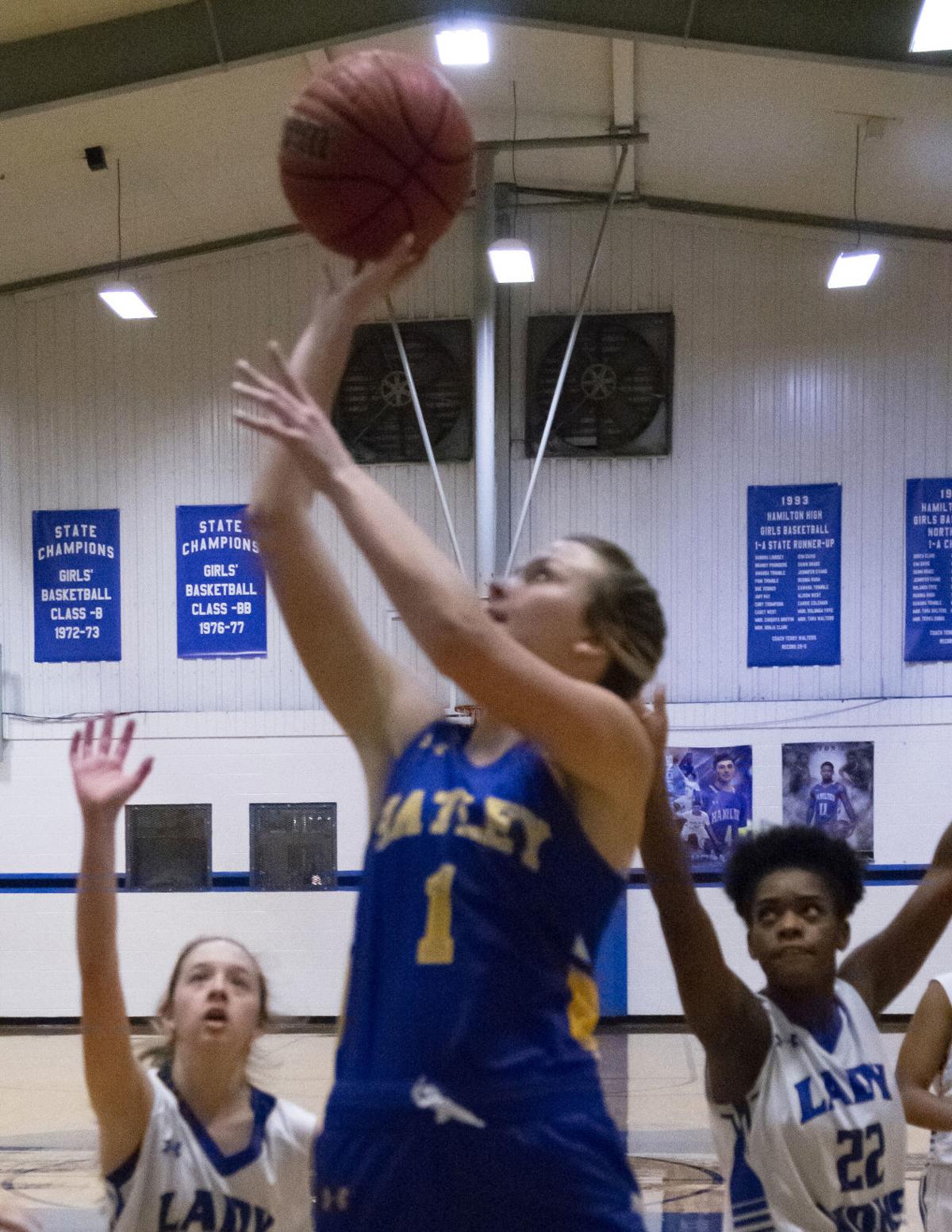 Hatley’s Emilee Slade puts in a basket in the third quarter at Hamilton last Tuesday night. 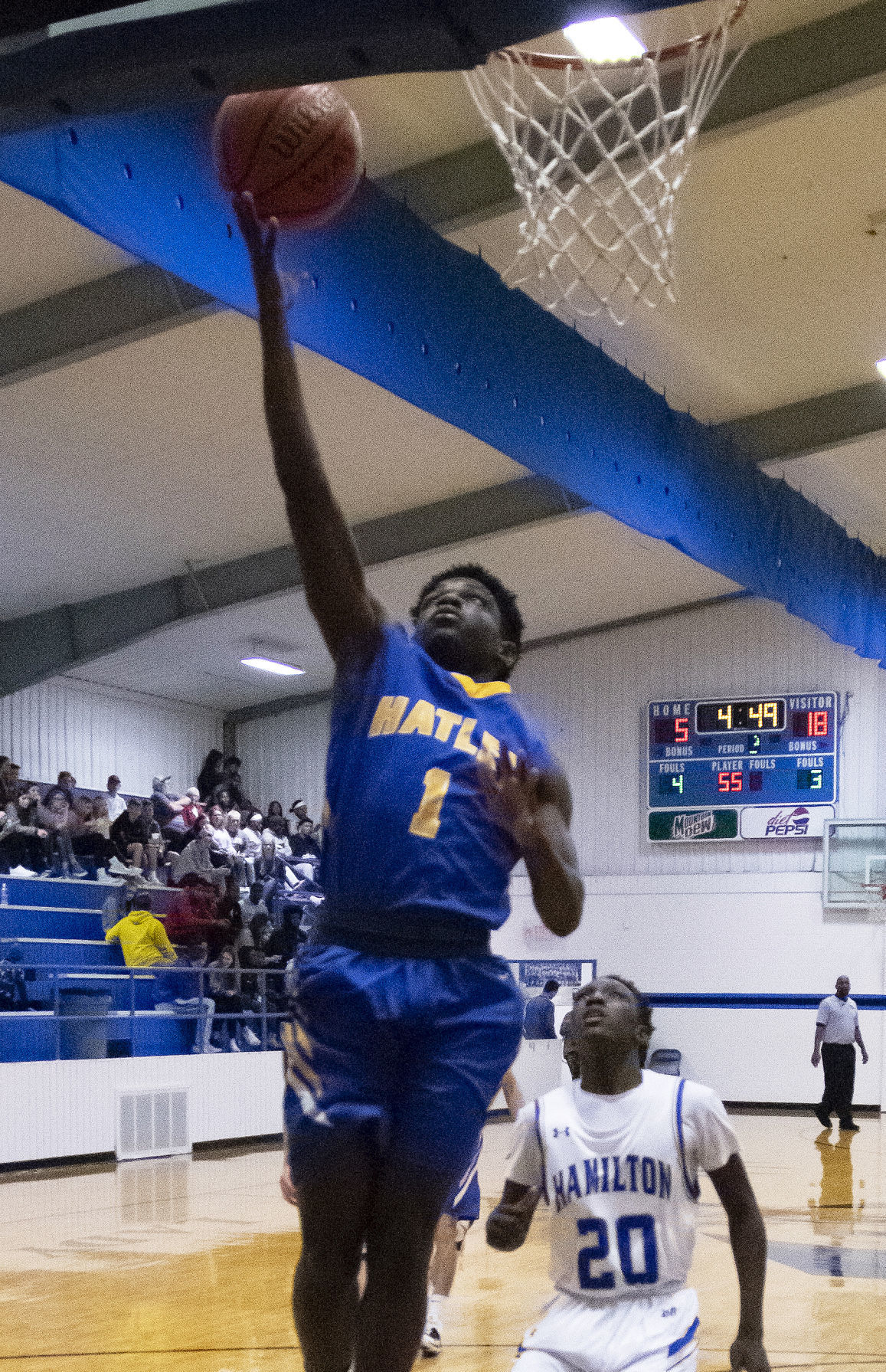 Hatley’s Markhel Hunt was one of three Tigers in double figures in the win over Hamilton with 13 points. 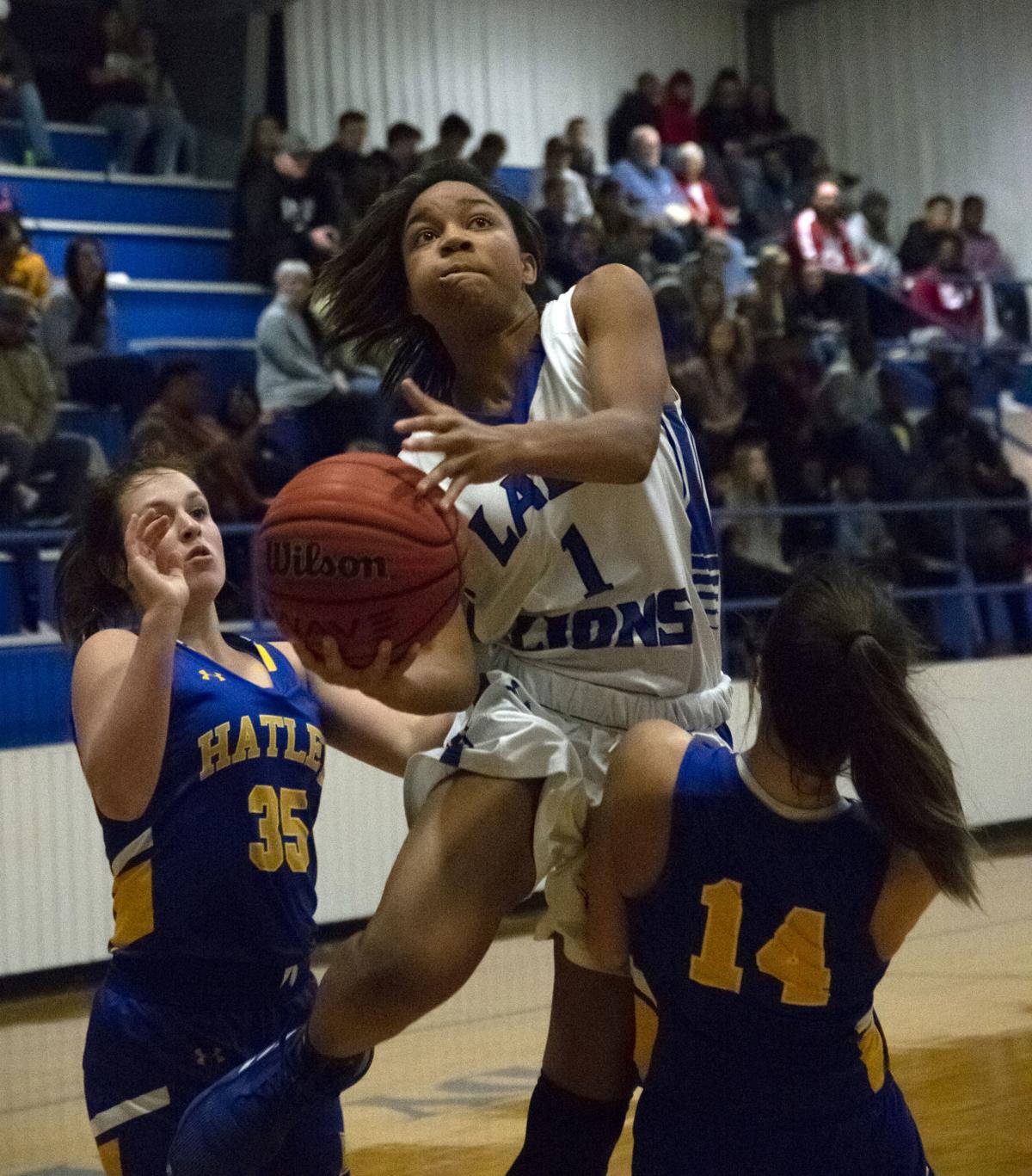 Hamilton’s Tori Harrison goes up for two of her 10 points against Hatley. 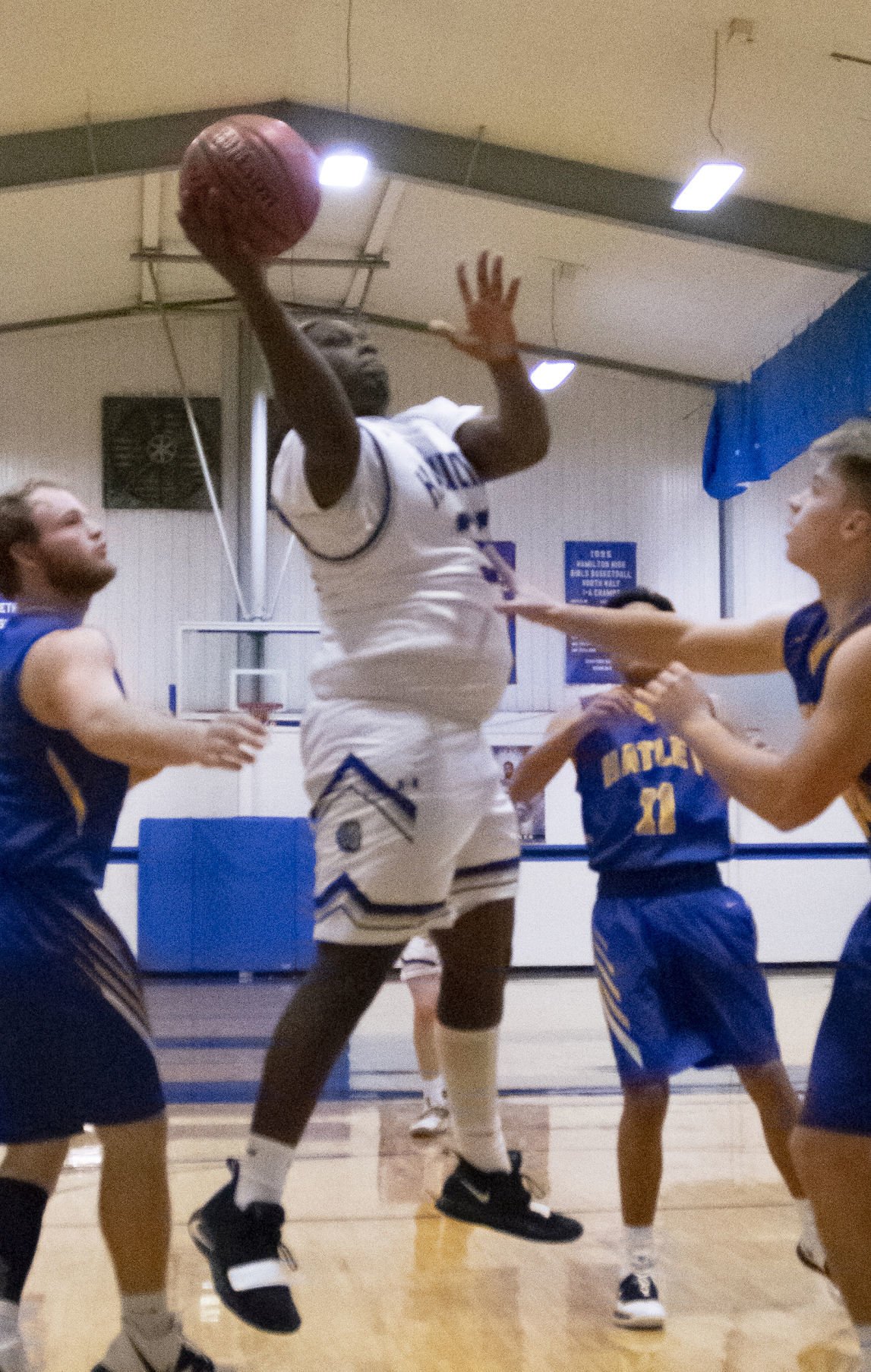 Hamilton’s Zach Crawford paced the Lions with 16 points against Hatley.

Hatley’s Emilee Slade puts in a basket in the third quarter at Hamilton last Tuesday night.

Hatley’s Markhel Hunt was one of three Tigers in double figures in the win over Hamilton with 13 points.

Hamilton’s Tori Harrison goes up for two of her 10 points against Hatley.

Hamilton’s Zach Crawford paced the Lions with 16 points against Hatley.

“The win gives them confidence. We’ve lacked confidence in the last few games,” Hatley coach Ginger McAlester said. “We talked about it before the game, just going out and playing like we know how to play.”

The Lady Lions jumped out to an early lead thanks to Tyra Verner’s shooting at the line and from the field. Sydney Elkin got the Lady Tigers on the board with her made free throw and tied the game with two more from the line. Alexia Ware gave the Lady Lions the lead back, but Tara Robertson took advantage of a turnover to tie the game again.

The Lady Tigers regained the lead with a 4-0 run, before Tori Harrison cut the lead in half with a nice move to the basket. A foul with less than two seconds left in the first quarter sent Lauren Mitchell to the line where she made one of her two for a 12-7 Hatley lead.

Hatley fouls early in the second quarter sent Ware and Kam Johnson to the line, where they cut the five-point deficit to two. Emilee Slade finally got the Lady Tigers back on the board with her layup off the steal. That began a 6-0 run, capped off by a Mitchell basket from Robertson’s steal. A long two from Johnson stopped the Hatley run and cut the lead to 18-12. Lauren Mitchell scored the last four points of the half to give the Lady Tigers a 24-12 halftime lead.

Emma Rose Thompson began the second half with a basket, but the Lady Lions came back with a roar. They went on a 6-0 run led by Verner’s basket and Harrison drawing a foul after scoring a layup. Slade’s steal and bucket stopped the run and her second-straight basket took the Hatley lead to 30-18. Tyra Verner went to the line late in the quarter, where she got one of two and then hit a long two to cut the lead at 30-21 at the end of the third.

The final eight minutes began with a Verner trip to the line, where she made one of two. Thompson answered to stretch the lead to 32-22. Johnson was fouled and made both shots, but Thompson again connected after cleaning up on the offensive glass, before Lowery Taylor’s shot cut the lead to 34-26. That sparked another run for the Lady Lions. Verner’s block led to a Ware make at the other end, and Verner’s basket from distance rolled in to make it a 34-32 game.

Elkin’s shot took the lead to 36-32 and stopped the run, but Verner was fouled on the next possession, where she made both shots and cut the lead in half. A foul sent Kenlee Wilkinson to the line with 3.8 seconds left. Both shots went in and put the game away, but a three from Kam Johnson went in at the buzzer to cut the final score to 38-37.

Verner led all scorers with 11 points, with Harrison getting 10 in the effort for Hamilton. Robertson led Hatley with 10 points.

The Hatley boys did their part, securing the season sweep after falling behind early.

The game began with a Zack Crawford rebound that led to B.J. Jones getting fouled on a drive to the rim where he made both shots to gave the Lions an early lead.

Markhel Hunt got the Tigers on the board with a made free throw, and Keller Wren’s conversion off a turnover gave Hatley the lead. This sparked the Tigers on a 9-0 run, with a three from Wren the highlight of the run. Joshua West’s made basket as the quarter expired stopped the nearly five-minute long Hamilton drought.

Brody Bickerstaff scored the first points of the second quarter, and Luke Moffett, Hunt and Wren contributed to a 10-0 run that ended with Collin Holman’s basket. West and Caiden Thompson helped Holman as the Lions went on a 6-0 run. Conner Powell’s three was the highlight of another long Tiger run, before West answered for the Lions on the next possession. Crawford’s layup was answered with a drive to the rim by Hunt to give the Tigers a 33-17 halftime lead.

After a back and forth beginning to the second half, Crawford’s basket opened the scoring. Hunt answered with a steal and basket of his own. Jones answered for the Lions, but the Tigers went on another mini-run to stretch the lead to 41-21.

“We’re not really an uptempo team, but we do have some guys that are pretty quick,” said Hatley coach Scott Booth on the Tigers’ transition game. “We expect to turn up the speed of the game. We tried it tonight, and it was successful.”

A foul behind the three-point line sent Drenon Benson to the line where he made two of three to stop the Hatley run. The Lions went on a 7-2 run, capped off by Willie Green’s three to get Hamilton within 13. Nick Washington scored on back-to-back trips to the line to stretch Hatley’s lead to 45-30.

The Tigers went on a 4-0 run to begin the fourth quarter. Rye Howard broke the drought, but Wren answered by cleaning up a missed shot. The Lions went on a late 9-3 run, highlighted by a Rye Howard basket from a Holman takeaway and Willie Green’s second three-pointer of the evening to cut the lead to 53-44.

Hatley answered with a 12-0 run, powered by Conner Powell’s back-to-back threes. Crawford’s basket at the end ended the drought and the game, giving Hatley the 65-46 victory.

Wren led all scorers with 17 points, with Hunt’s 13 and Moffett’s 12 points adding to Hatley’s effort. Crawford led the Lions with 16 points.