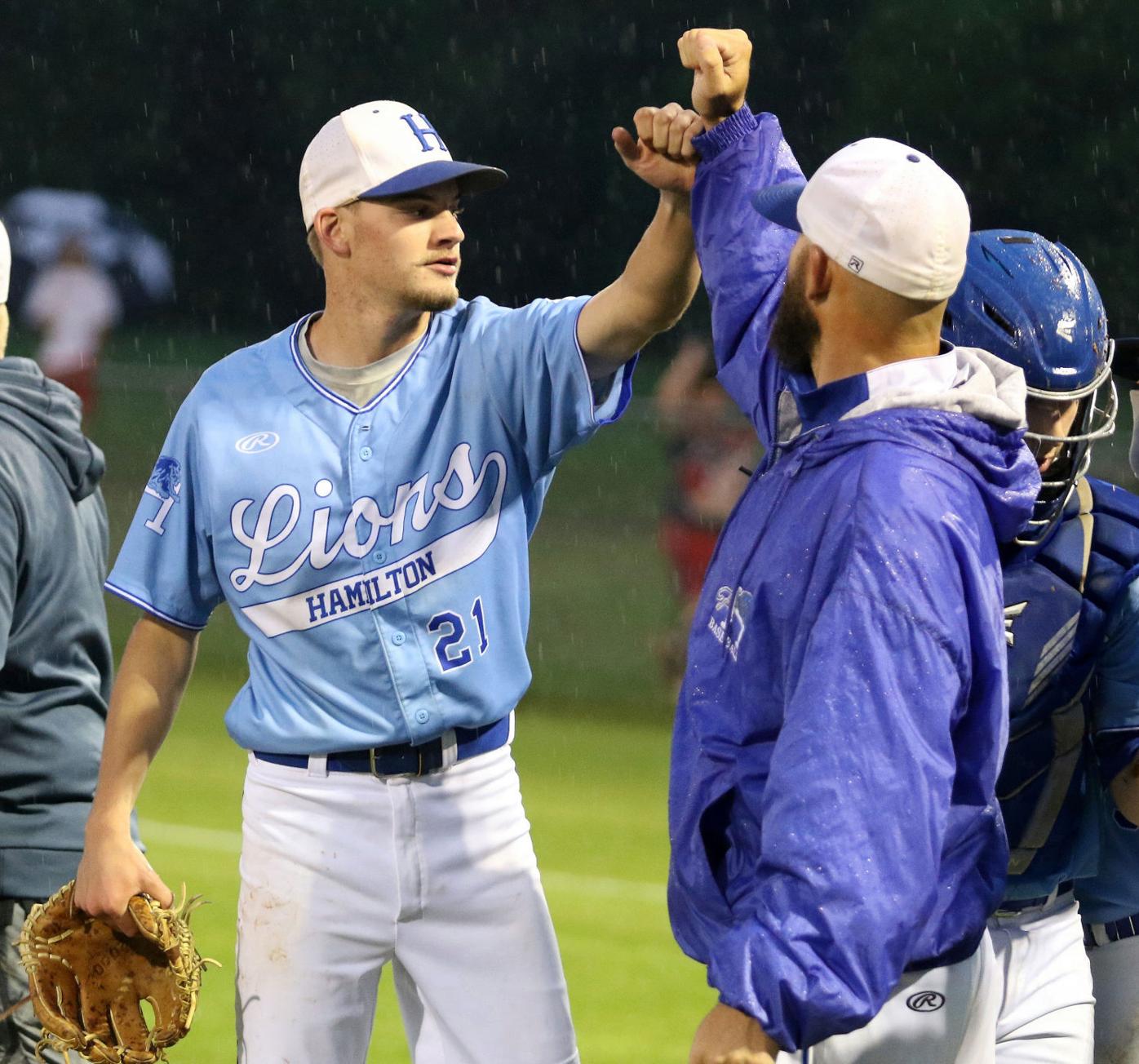 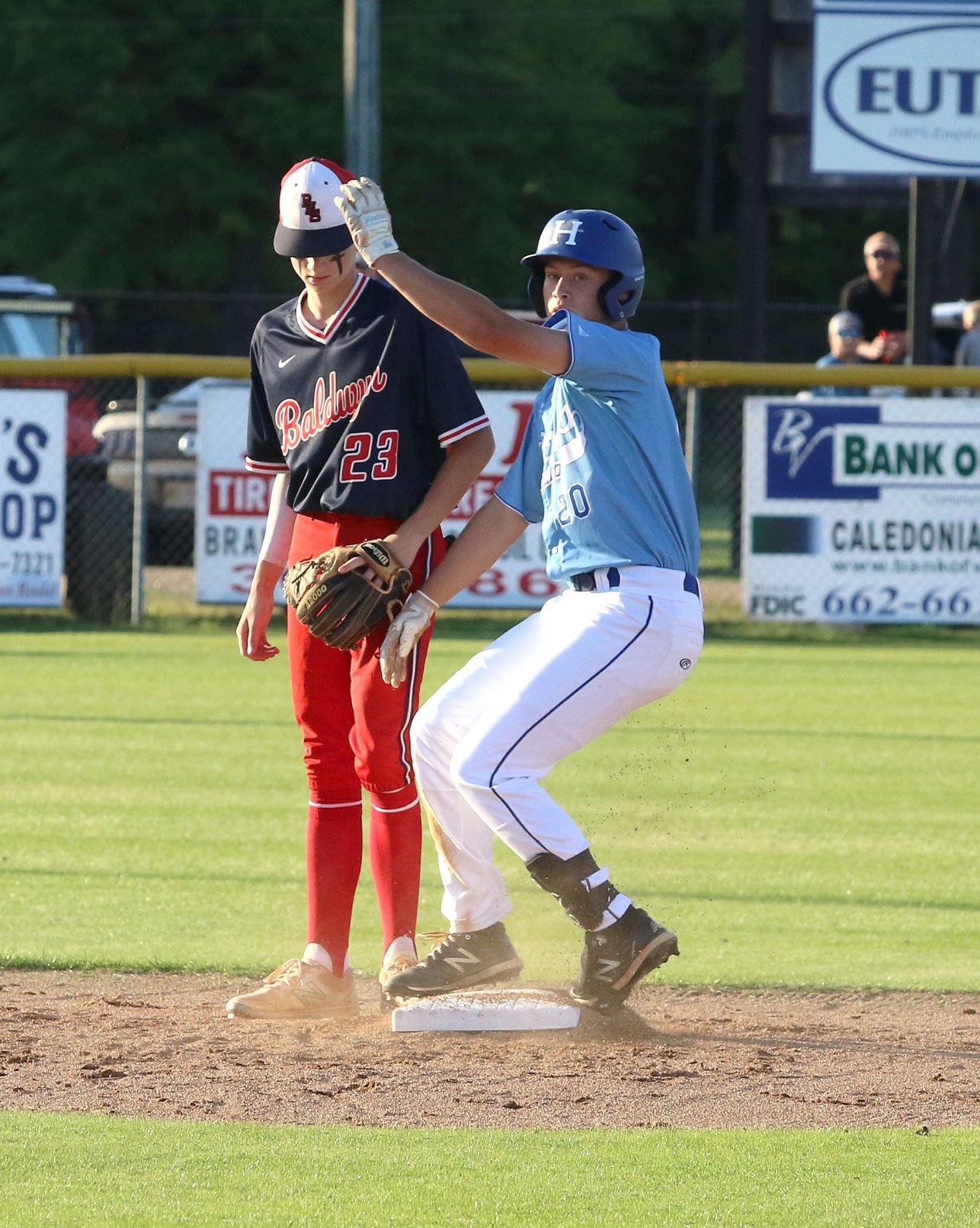 Hamilton's Evan Pounders goes into second on one of his two doubles on Thursday night. 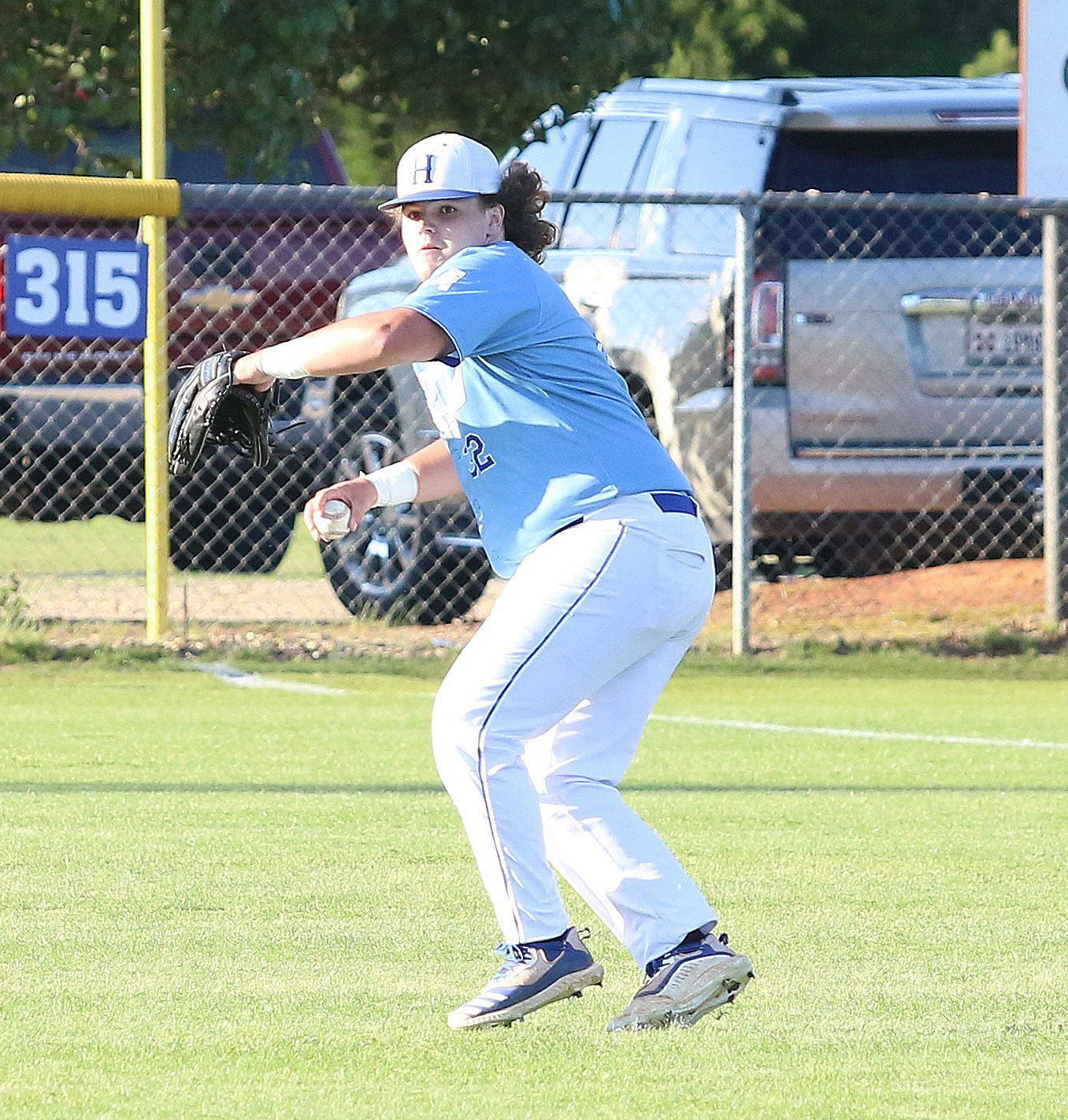 Hamilton's Sam Robinson went 2 for 3 with a double and 3 RBI in the Game 1 win. 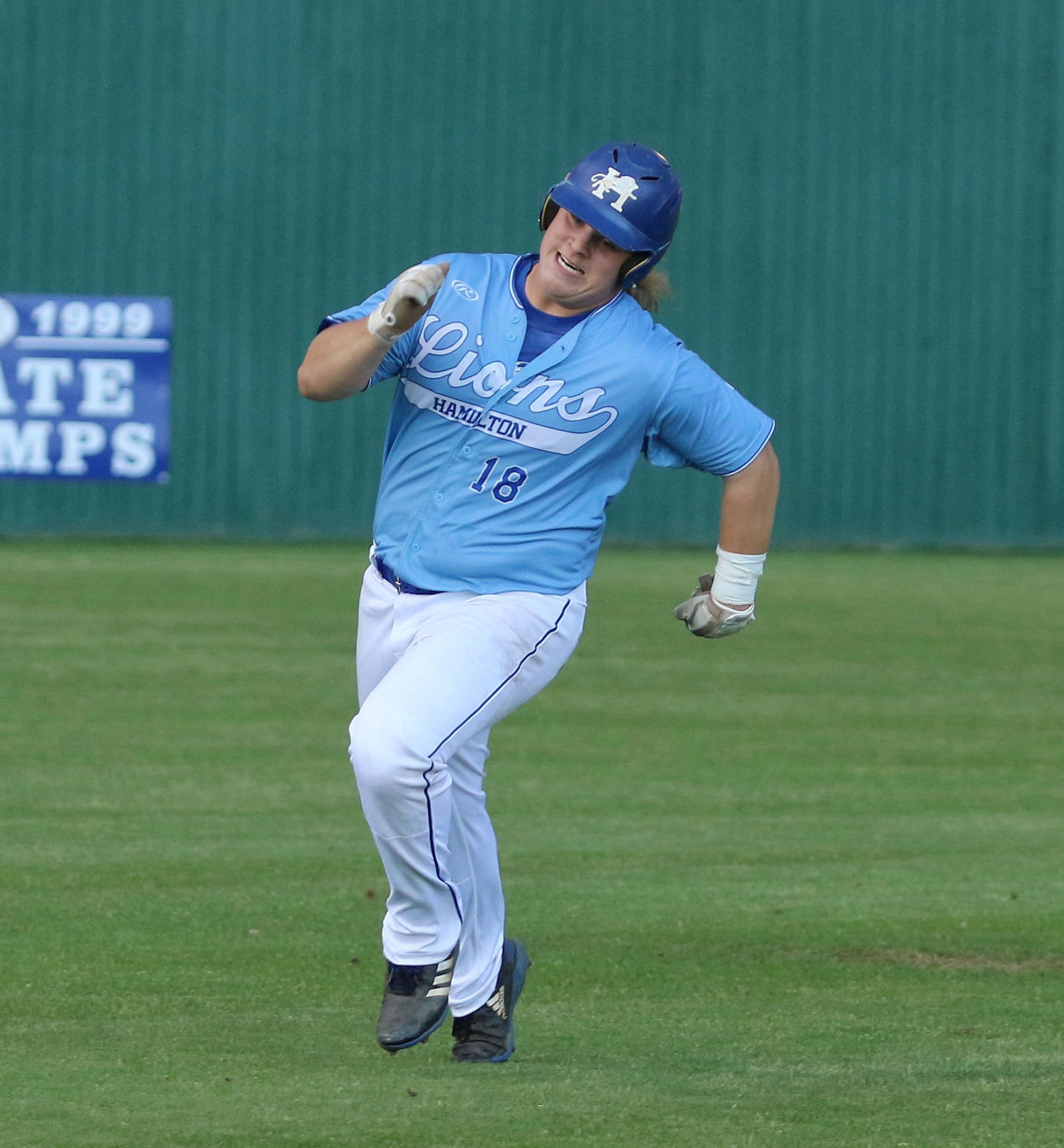 Hamilton's Quinn Pounders rounds the bases after hitting an RBI single in the third inning on Thursday. 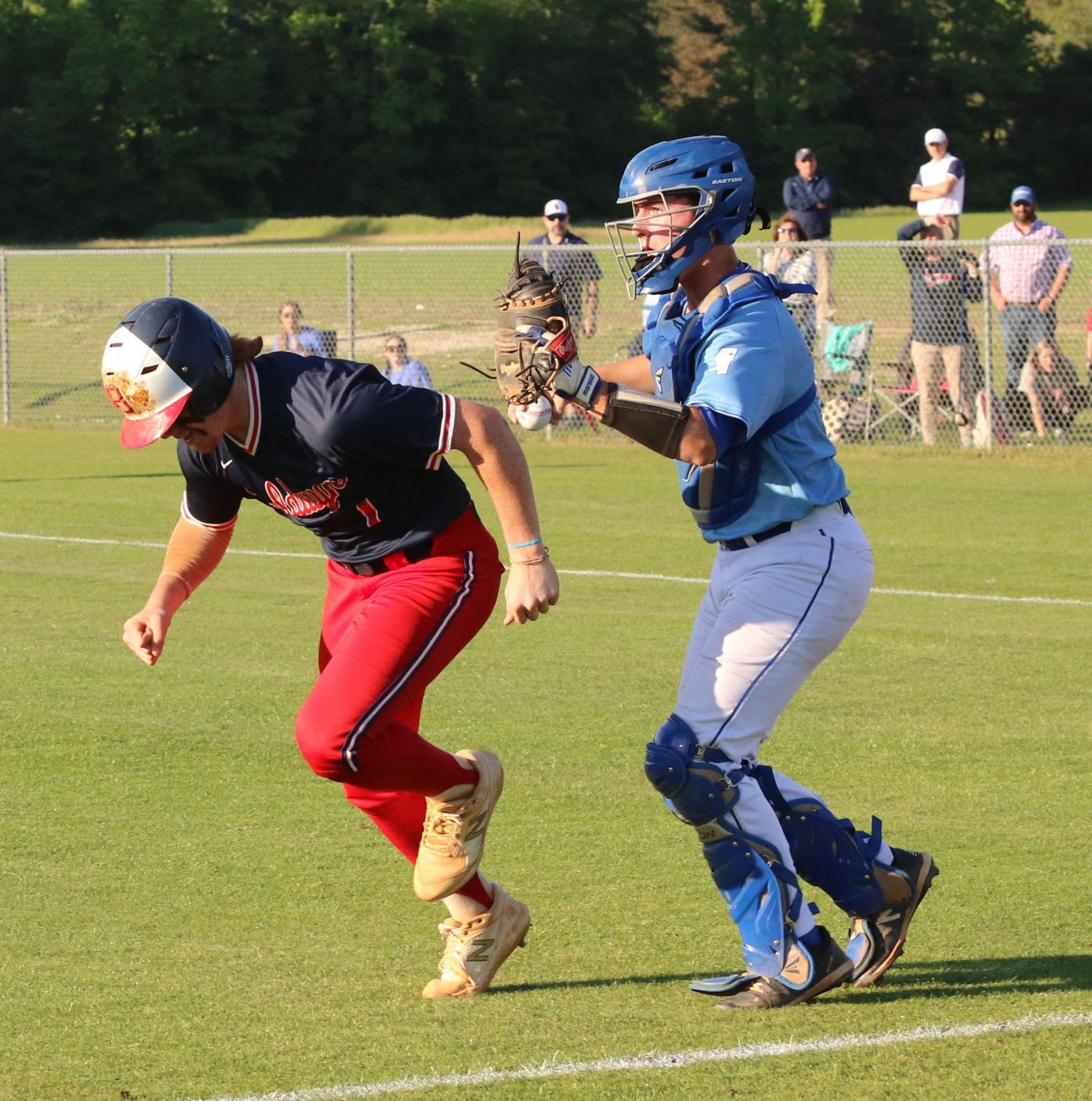 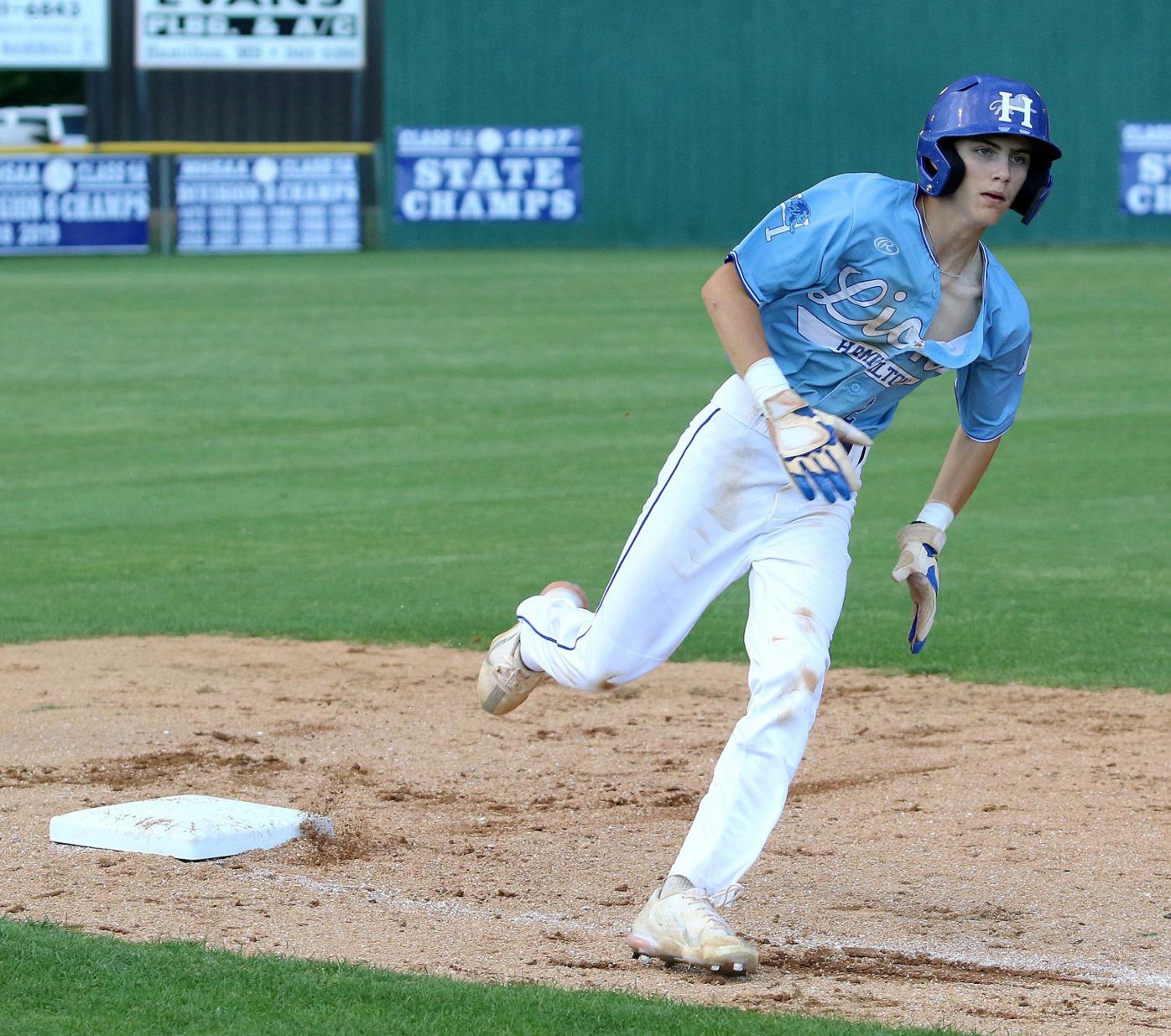 Hamilton's Suede Shows rounds third and heads to score in the third inning.

Hamilton's Evan Pounders goes into second on one of his two doubles on Thursday night.

Hamilton's Sam Robinson went 2 for 3 with a double and 3 RBI in the Game 1 win.

Hamilton's Quinn Pounders rounds the bases after hitting an RBI single in the third inning on Thursday.

Hamilton's Suede Shows rounds third and heads to score in the third inning.

HAMILTON – The Hamilton Lions were down in their second-round playoff encounter Thursday night. Back-to-back RBIs from Quinn Pounders and Sam Robinson changed that as the Lions beat Baldwyn 10-4 in a rain soaked game 1 to take a series lead.

“We’ve put a lot of pressure on those guys to deliver, but when they hit, we win,” Hamilton coach Dallas Flippo said. “When they don’t, we have a hard time winning and it was big to see them go back to back like that.”

Hamilton finished off the series with a 12-1 win in Game 2 to advance to the third round against Pine Grove.

Joshua West got the start for the Lions and quickly found himself in a hole, giving up three straight hits and a 2-0 lead in the top of the first.

Evan Pounders finally broke through with Hamilton’s first hit on a double into left field in the bottom of the second, but the Lions couldn’t drive him in.

West gave up a walk and a single to start the third but redeemed himself by picking off the Bearcats’ leadoff man at second. Blake Gosa got his first pickoff of the night, and the inning ended when the pinch runner was caught stealing third.

West led off the bottom of the third with a single. Josh Harrison came on as a pinch runner but was out at second on Suede Shows’ fielder’s choice and he got to second.

Drake Pittman’s single put runners on the corners, and Quinn Pounders’ hit to the center field fence brought Shows home. Robinson kept the party going with an RBI double into center field to bring Pittman and Pounders in for a 3-2 lead.

The Lions kept the momentum going in the top of the fourth with another 1-2-3 inning. Evan Pounders got a leadoff double in the bottom half, but a caught stealing and a pair of fly outs ended the inning. A Driving rain and high winds halted the game in the fifth, and after a roughly 30-minute rain delay, the game restarted with West’s first strikeout of the game.

West started the sixth with a strikeout, but the Bearcats scored on an RBI single to cut it to 7-3. Gosa got his second pickoff of the night at first, but a double brought home another run. West ended the inning with his third strikeout.

Pittman drew a walk, and Quinn Pounders reaching on an error and Robinson’s walk loaded the bases. Back to back freebies brought home a pair of runs, and Robinson also scored on a passed ball

The seventh began with West’s fourth strikeout of the game. A single was given up but the game ended on Gosa’s third pickoff of the night.

The Lions were in control from start to finish behind a solid offensive performance and another dominating game by Grayson Cockerham on the mound.

Cockerham allowed an unearned run on two hits, four walks and struck out 10 on the night.

Hamilton jumped on Baldwyn out of the gate, putting up four runs with a sac fly from Sam Robinson, an RBI single from Evan Pounders and a two-run double by Ethan Gazaway.

The Bearcats scored their lone run in the bottom of the first, and the Lions got that one back in the second on Quinn Pounders’ RBI hit after Suede Shows’ leadoff single.

Joshua West’s double in the third stretched it to 7-1, and Noah Hester doubled in a pair in the top of the fifth.

West put the exclamation point on the game by blasting his first career homer in the sixth to cap off the scoring.

Right at home: Nettleton’s Sullivan bringing in her championship experience