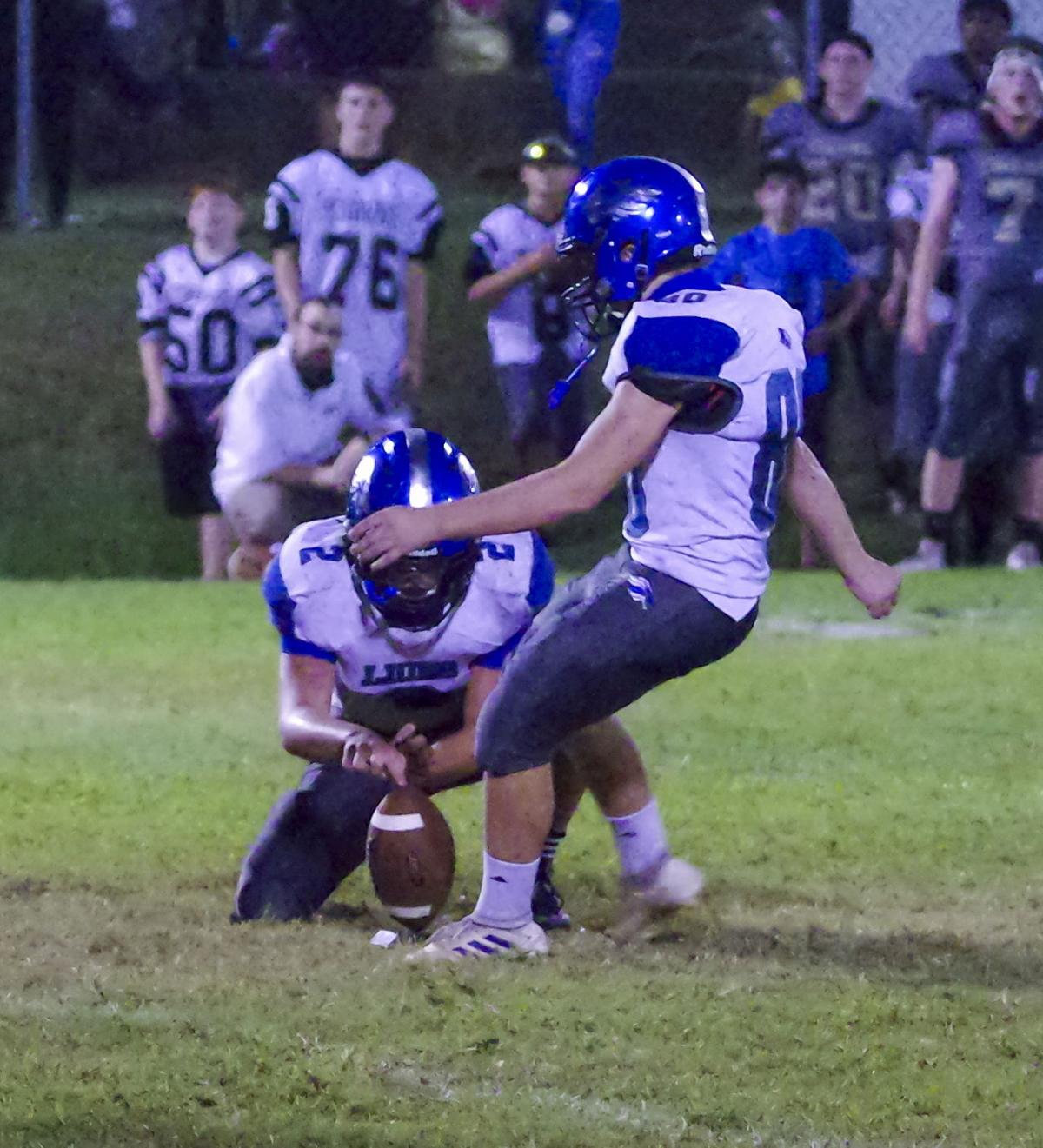 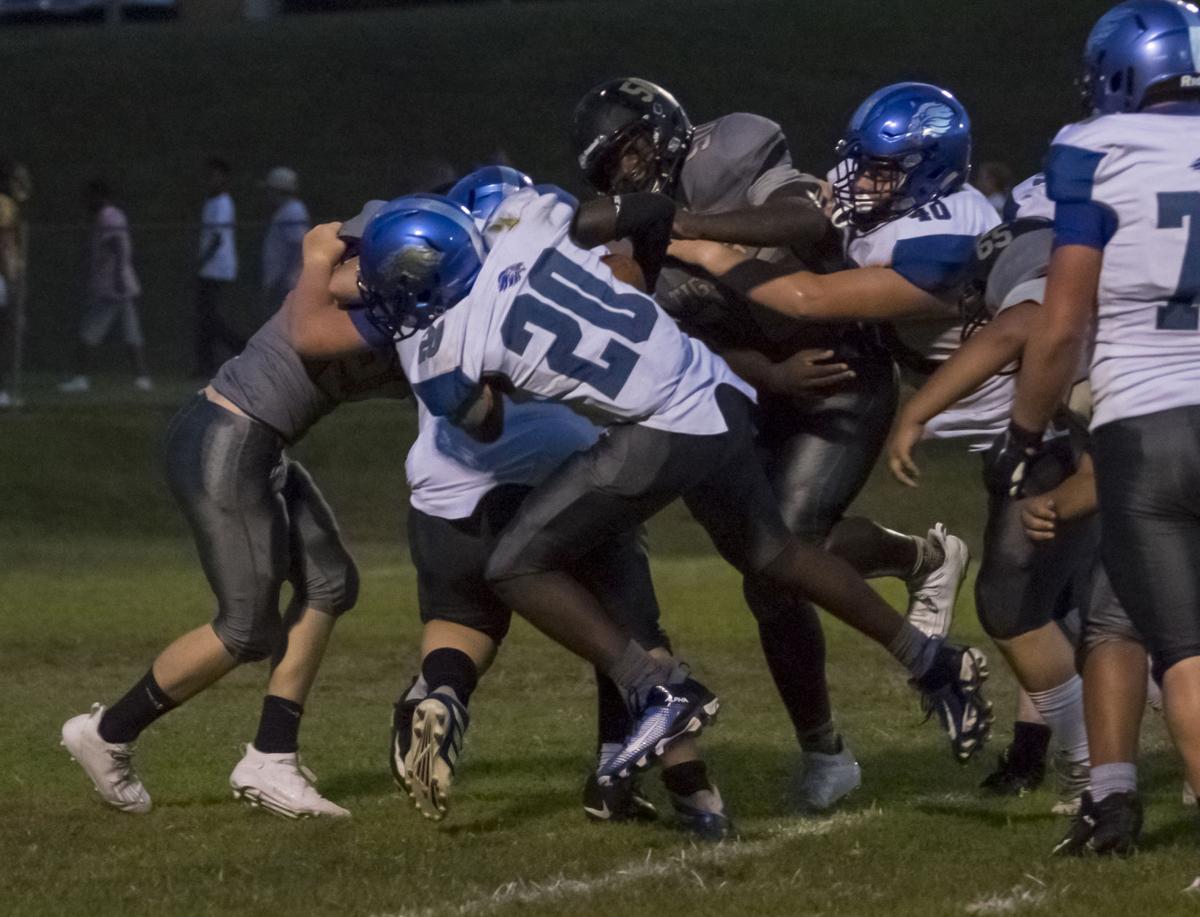 Hamilton running back Rye Howard barrels into the end zone behind a block from Sam Robinson for his first touchdown of the night. 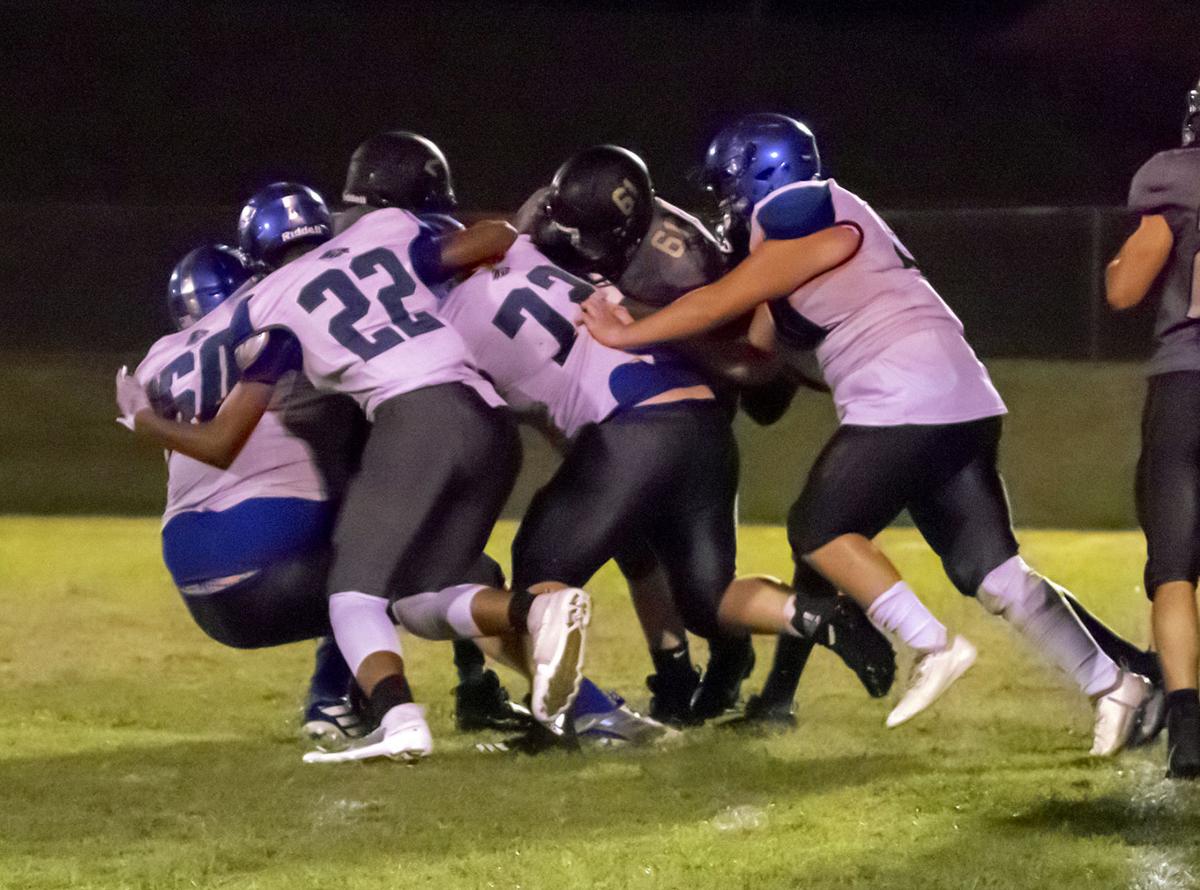 A group of Hamilton defenders including, from left, Tyler Bertrand, Xavier Steffin, Quinn Pounders and Sam Robinson, swarm to the Ethel ball carrier. 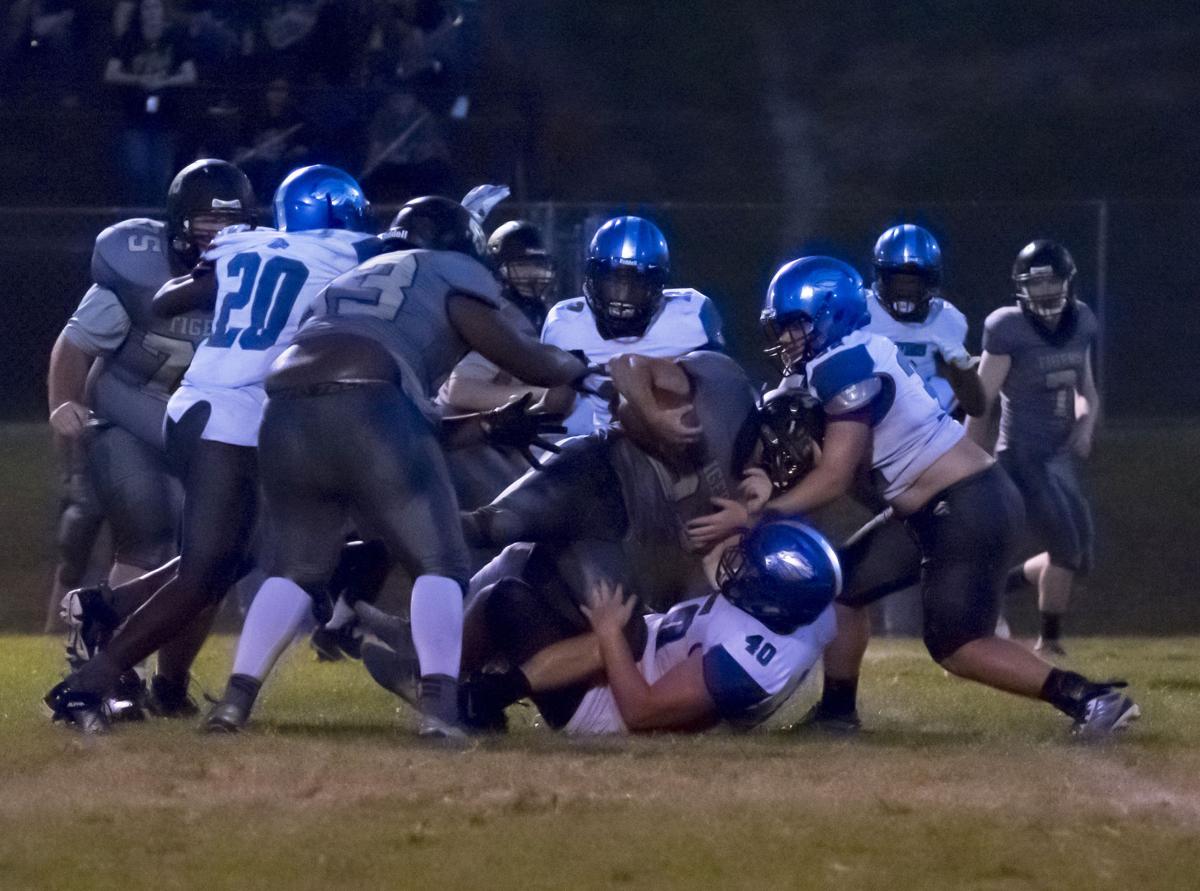 Hamilton linebackers Sam Robinson and Sean Potts combine on a tackle of an Ethel runner. 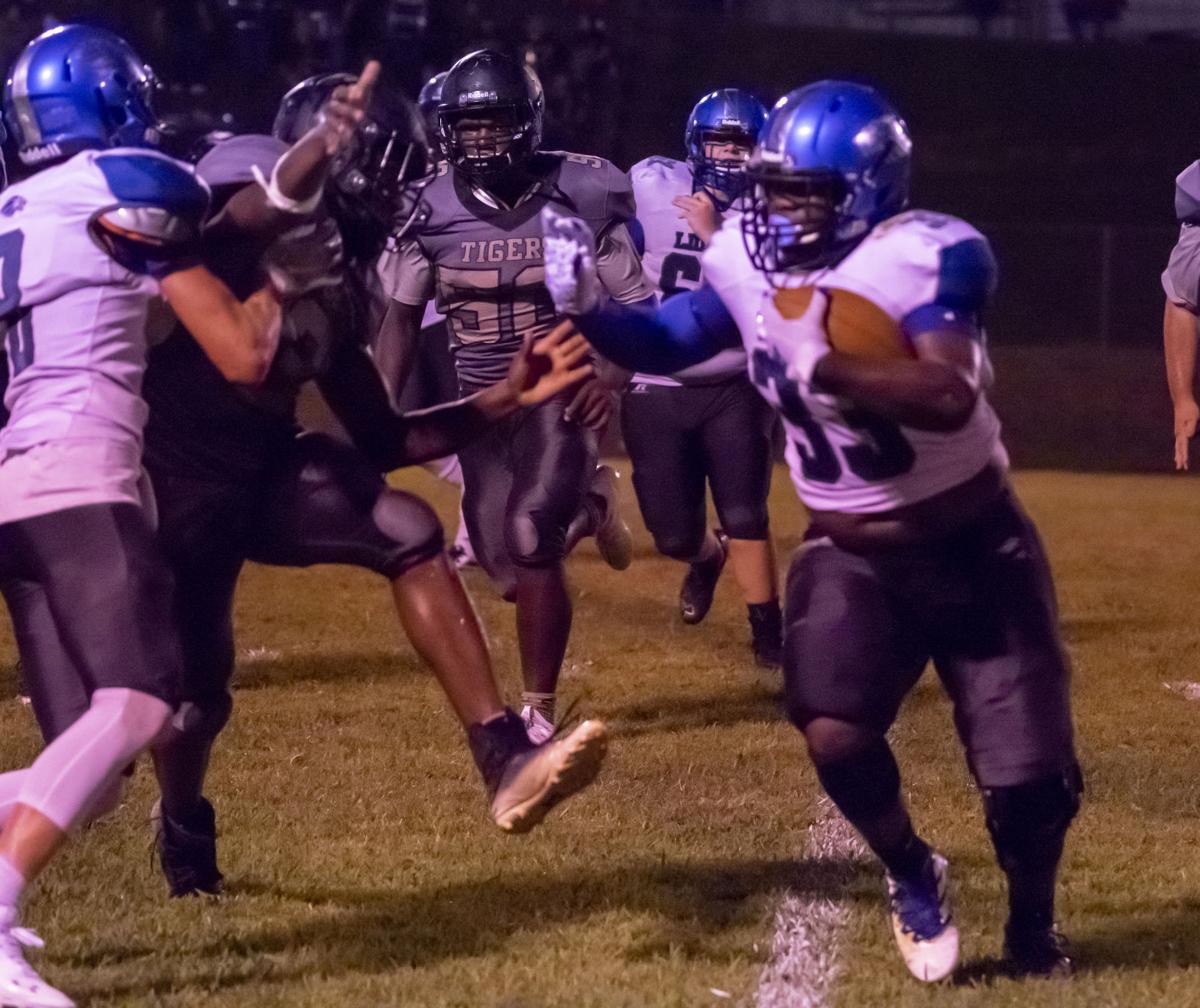 Hamilton running back Joshua Harrison cuts to the edge against Ethel.

Hamilton running back Rye Howard barrels into the end zone behind a block from Sam Robinson for his first touchdown of the night.

A group of Hamilton defenders including, from left, Tyler Bertrand, Xavier Steffin, Quinn Pounders and Sam Robinson, swarm to the Ethel ball carrier.

Hamilton linebackers Sam Robinson and Sean Potts combine on a tackle of an Ethel runner.

Hamilton running back Joshua Harrison cuts to the edge against Ethel.

Hamilton coach Wade Pierce had already seen his team come from behind in the fourth quarter to force overtime on Friday night in their season-opener against Ethel.

After seeing them hold Ethel in the first overtime possession, Pierce knew he needed sure points and turned to his sophomore kicker Parker Beasley. Beasley answered the call and drilled a 23-yard field goal to lift the Lions to an 18-15 road win.

“I looked at Parker and asked him if he was ready for it, and he said, ‘Coach, if it comes down to that point, we will win this football game,’” Pierce said. “It was the first field goal he has ever attempted in a game, and he wasn’t nervous. There was never a doubt. We ran three plays, but I didn’t want to be too conservative or too aggressive. You know you have a guy that can kick it, and when we got down to the 5-yard line, I said, ‘Buddy, it’s your turn.’ And he drilled it.”

Hamilton trailed 15-7 going into the final quarter with the first touchdown coming from Rye Howard on a two-yard run in the second quarter. The Lions’ defense came up with a big play to ignite the game-tying drive as Quinn Pounders got to the quarterback in the backfield, forced a fumble and returned it to Ethel’s 40-yard line.

Evan Pounders found D.J. Dobbs for a 36-yard reception to set up another scoring run by Howard, who also scored the two-point conversion to tie the game with 2:30 to go.

“The credit goes to our kids because they never quit fighting,” Pierce said. “I told them that last year, I don’t know if we would have won that game, and I was just so proud of them and the way they fought. Even when things weren’t going our way, we stayed together. Defensively, we answered the call every single time.”

Hamilton’s defense came up with two key stops after the game was tied – one to finish out regulation and the next to hold Ethel in overtime.

“They had a couple of bad snaps on their last drive in regulation, and you have to credit Tyler Bertrand on that. He was very hard to block and had several big plays,” Pierce said. “Our whole defensive line of Quinn, Bertrand and Zach Crawford made a lot of play and were very difficult to block. On offense, D.J. had some big catches, and he’s someone you can stretch the field vertically and throw a deep ball to. It’s big having him back. Evan also played a good game for his first start, and Rye rushed for about 75 yards and two touchdowns.”

Pierce credited a much-improved Ethel team for a hard-fought game.

“They played their hearts out, and Coach (Adam) Smith is doing a great job with them. They are a completely different team from what we saw last year,” he said. “Getting this win feels good. We have been practicing for weeks, and then it was disappointing last week when our scrimmage against Mantachie was canceled. I hope we can use this as a springboard to get to where we want to be. You don’t know how many chances you get to win games these days, and I told them that they will remember this one for the rest of their lives.”

With the large divisions in Class 1A, Hamilton jumps right into Division 2-1A play this week, hosting West Lowndes. The Panthers made the playoffs last season and topped Hamilton 36-0 in their previous meeting.

“They lost to Kemper County this past week, but they are supposed to have a good football team,” Pierce said. “You can count on West Lowndes being very good and well-coached. Coach (Anthony) King does a great job with them, and they have a lot of veteran coaches on their staff that know what they’re doing. They will be very big and athletic, and this is a big opportunity for us.”