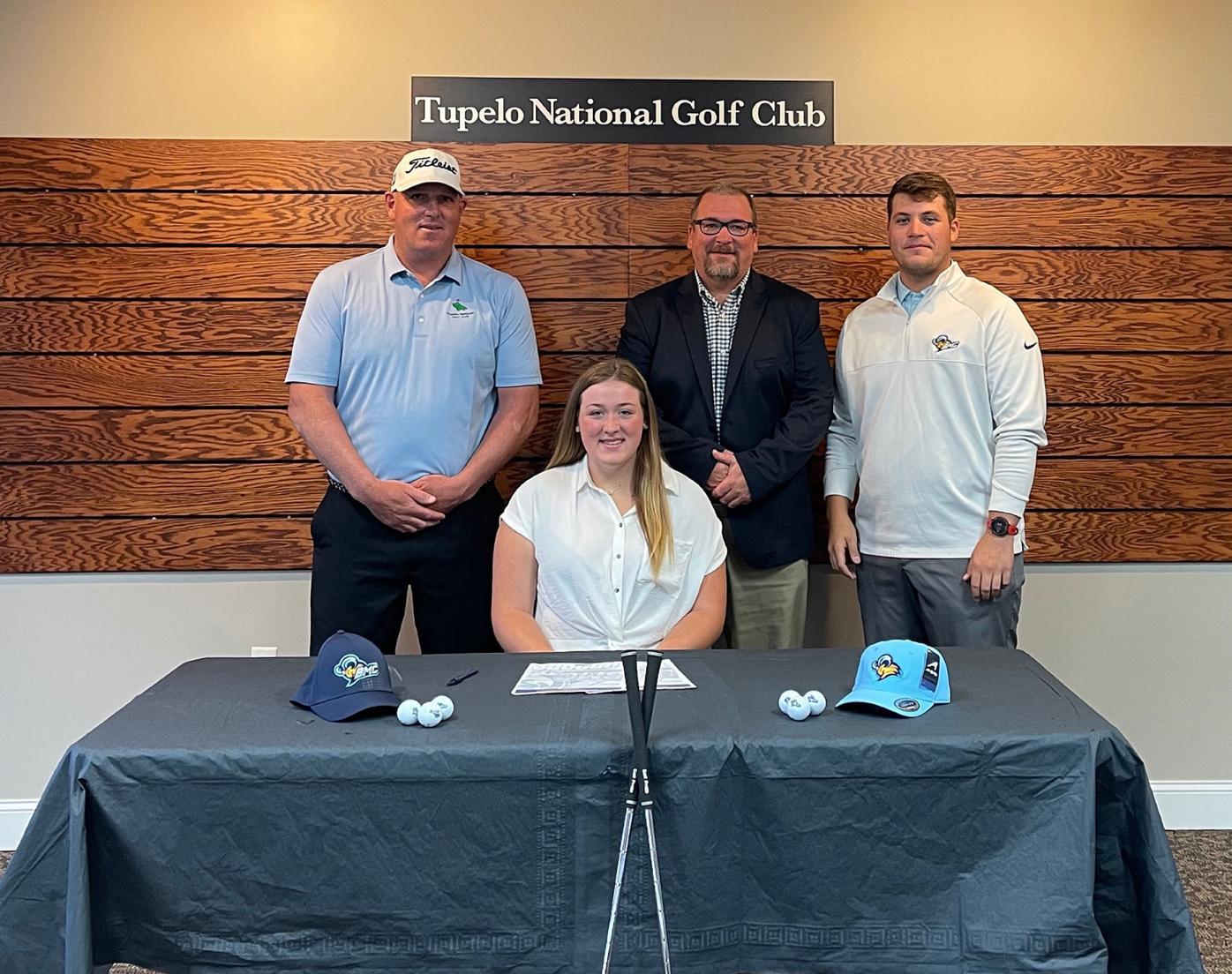 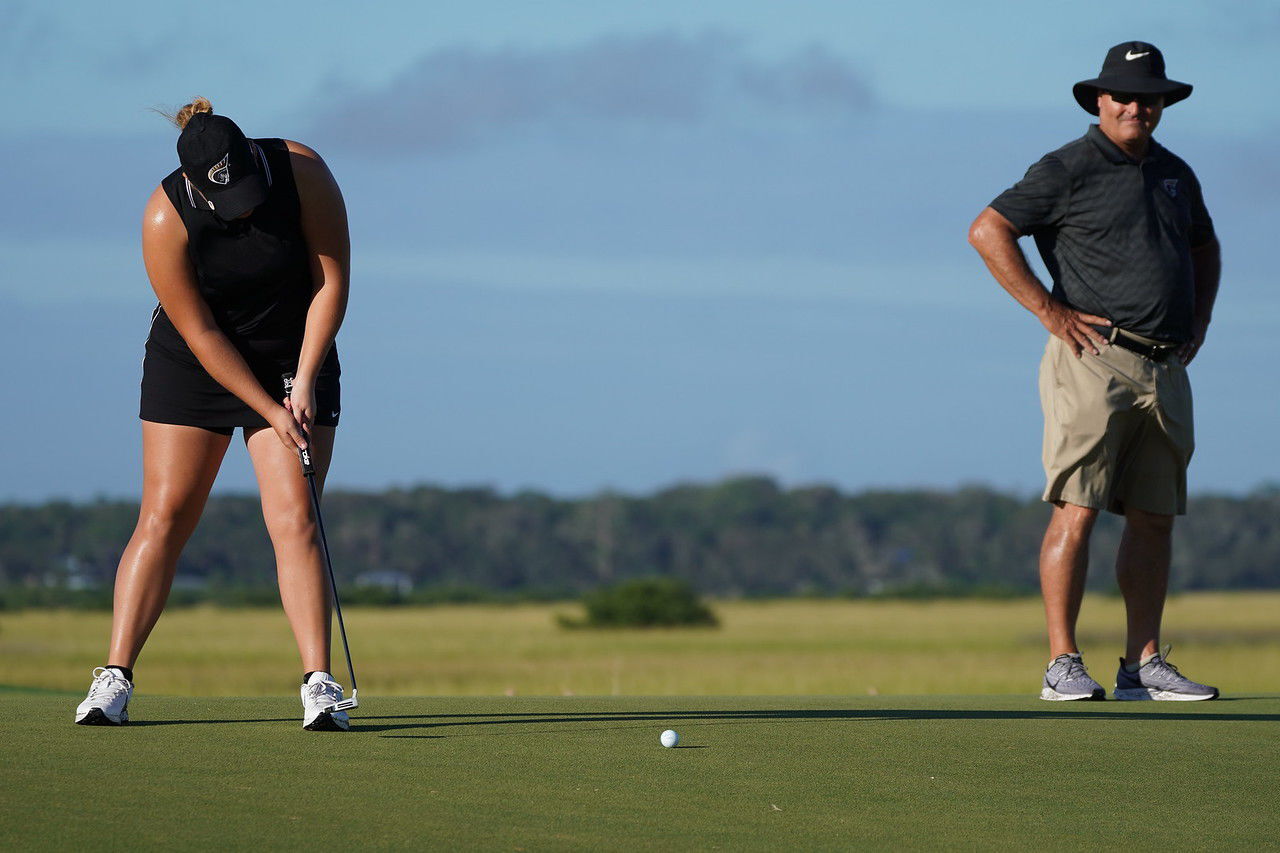 Nettleton’s Riley Mayhew is coming back home and reuniting with a familiar face.

The five-time individual state golf champion played her freshman year at Anderson University in South Carolina but saw her chance to get closer and reunite with best friend and former teammate Sarah Raper. Mayhew signed to join the Blue Mountain College golf team and play the next four seasons for the Toppers.

“I have always been a homebody, and I guess I didn’t realize when I was moving how big of a change that it would actually be,” Mayhew said. “I loved my teammates and coaches there at Anderson, but it wasn’t home and I missed it really badly. I decided to come home, and now I’m playing with Sarah for another four years.”

Mayhew said when she realized she wanted to play closer to home, she contacted Blue Mountain coach Kevin Barefield.

“I told Coach Barefield after I talked to my coaches at Anderson and told them how I was feeling that I missed home, and I was honestly desperate,” she said. “Later on, he ended up offering me. It was kind of a last minute thing. I went up there for a visit a few weeks ago, and I love both of the coaches. They are both great guys. I love the school, and it’s a real old school. It’s really pretty, and the golf facility is very nice, not just it but the whole sportsplex.”

Mayhew was impressed with the golf facilities, which includes a putting and hitting area and a place to track one’s swing. Plans are also in the works to build a golf range, a green and a sand trap.

“It’s really nice, and I feel like in the next few years, it’s going to be really good,” she said.

While her freshman year at Anderson had some difficulties due to the pandemic, Mayhew did find success there, especially throughout the spring semester.

“My first semester, I was struggling a little bit because I had a lot going on. I was adjusting to the change,” she said. “We were supposed to have four matches in the fall, but they did a half season where we only had two matches, just to keep us playing. It still counted towards our rankings.”

Mayhew played as an individual at times and with the team in other tournaments. One of the other adjustments was the grueling college schedule.

“This past semester I was getting a little more comfortable, and I played really well,” she said. “We play 36 holes on a Monday and 18 on a Tuesday, and it’s absolutely draining. We have to walk and tee off at 8 a.m. and go all day long. The longest it’s ever taken us was what got done at 7 p.m. one time.”

She averaged shooting around 75 and 77 for most of her spring tournaments, with her best score being a 70. Anderson’s team ranked 13th in the country after the fall season and got in the top 10 during the spring, getting as high as fourth.

Their team made it to regionals, but Mayhew didn’t compete, due to her plans to transfer, and just barely missed out on competing for nationals.

Mayhew’s freshman season came after a layoff due to the 2020 spring season being canceled and a slowdown in her usual summer tournaments as well.

“I don’t think it affected me that much, but it was a little different going into my first college tournament not having played competitively for probably around eight or nine months,” she said. “It didn’t take long to get back into it, just because I have been playing for so long.”

Raper, Mayhew’s long-time teammate and best friend, signed her letter of intent with Blue Mountain back in the fall, and the two are looking forward to being reunited on the course.

“Sarah is really excited, and she was really upset we didn’t get to play my last year of high school golf together. She said this year that playing at state didn’t feel the same without me,” Mayhew said. “We were talking the other day, and she said she never would have thought in a million years that we would be going to play college golf together. She’s just really excited, and I’m glad to be back home. I missed her a lot, and I’m planning on getting my master’s so I will be there for four years with her. It’s going to be good to get to play with her again and make new memories in a different chapter of my life.”

Mayhew said she also believes being back home will improve her game.

"When you're happy, you play better, so I feel like now that I'm back home, not that I was unhappy there, I am really hoping to excel," she said. "Every golfer gets their great year, and I haven't had mine yet in my opinion. I'm hoping this year will be the year."

Pausing to reflect makes for a bittersweet exit

Amid craziness and conspiracy theories, always maintain your poker face

Local farmers markets gear up for the summer season