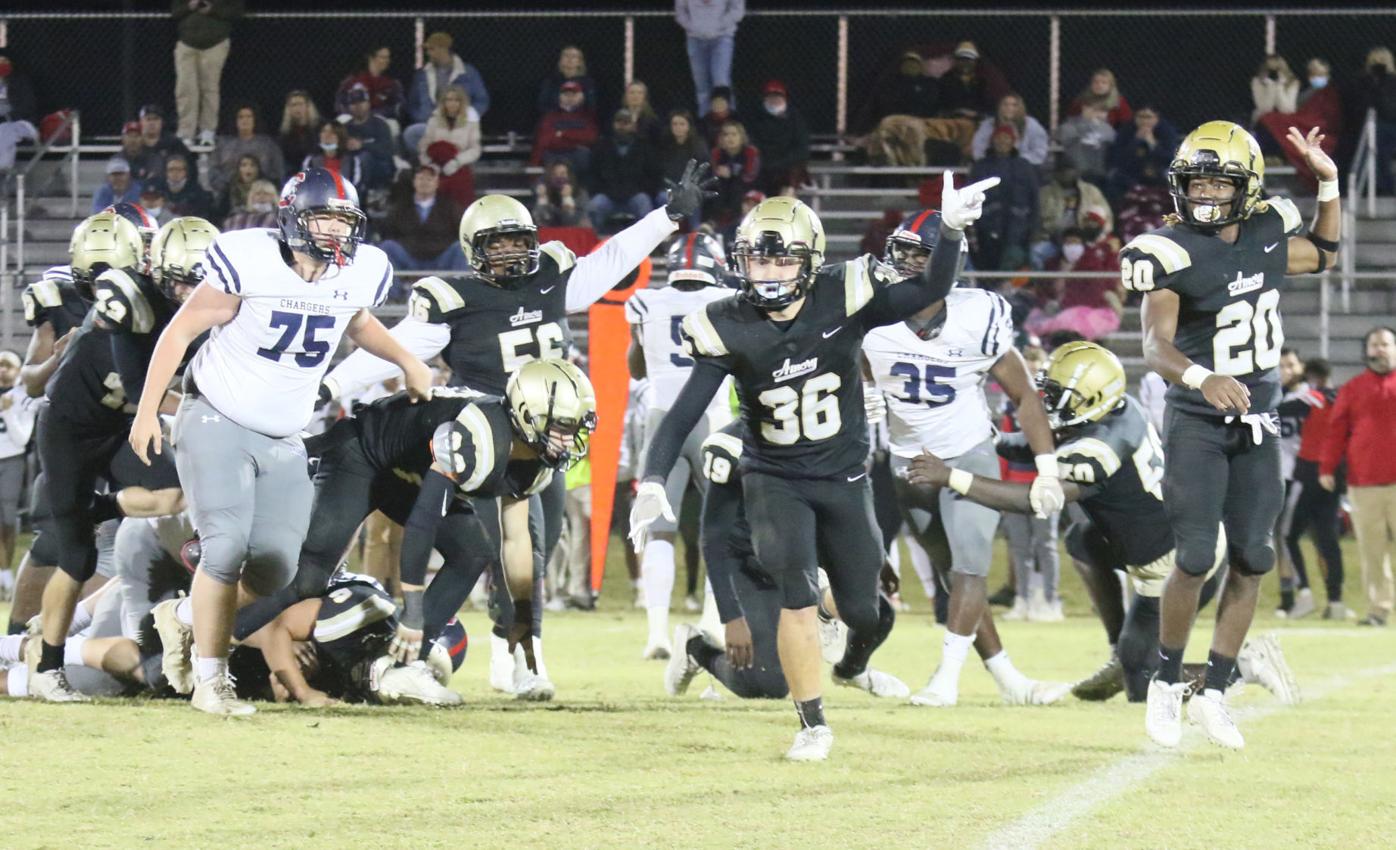 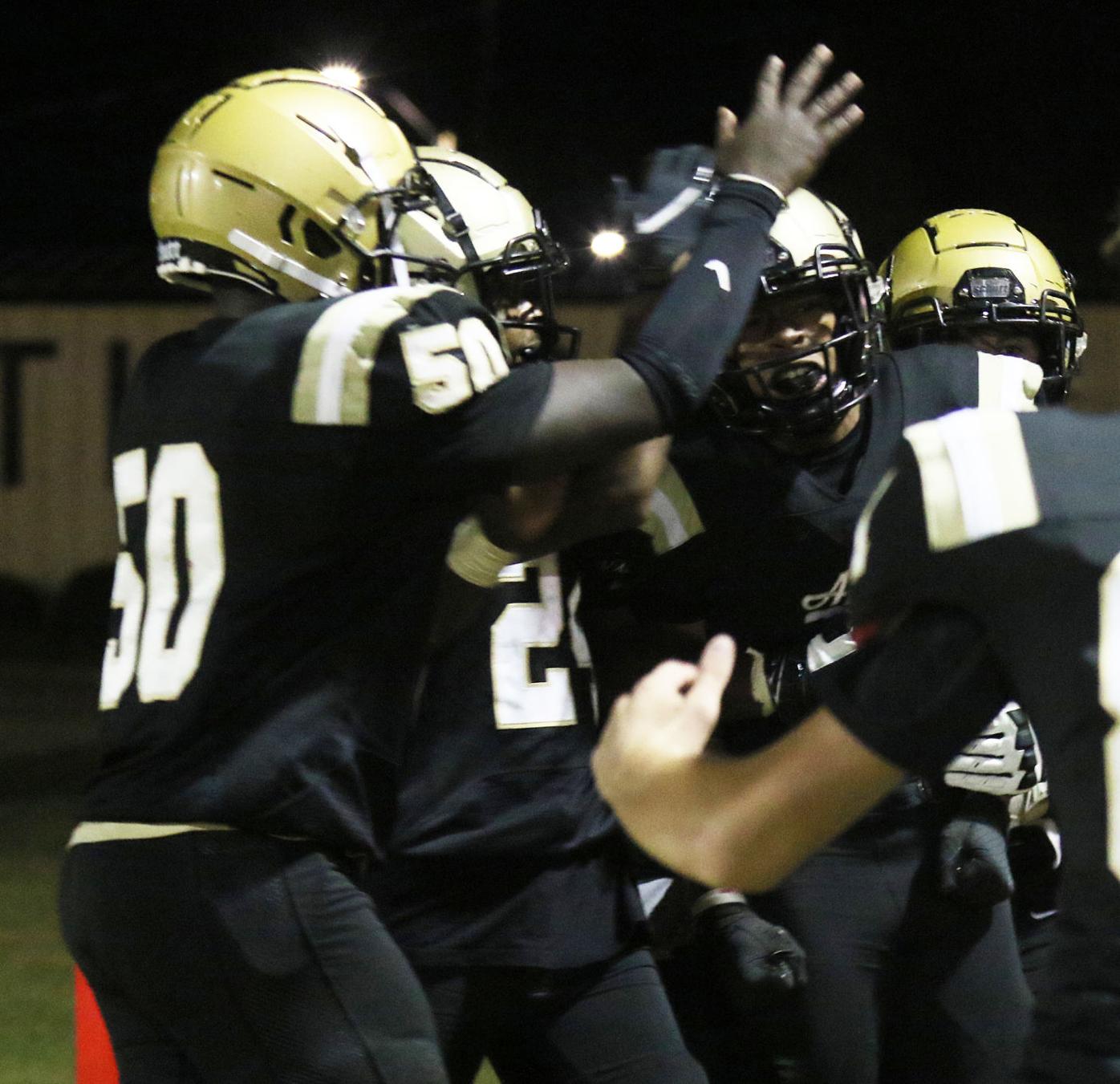 Amory’s Braxton Griffin is mobbed by his teammates after his game-winning catch with 10 seconds to go. 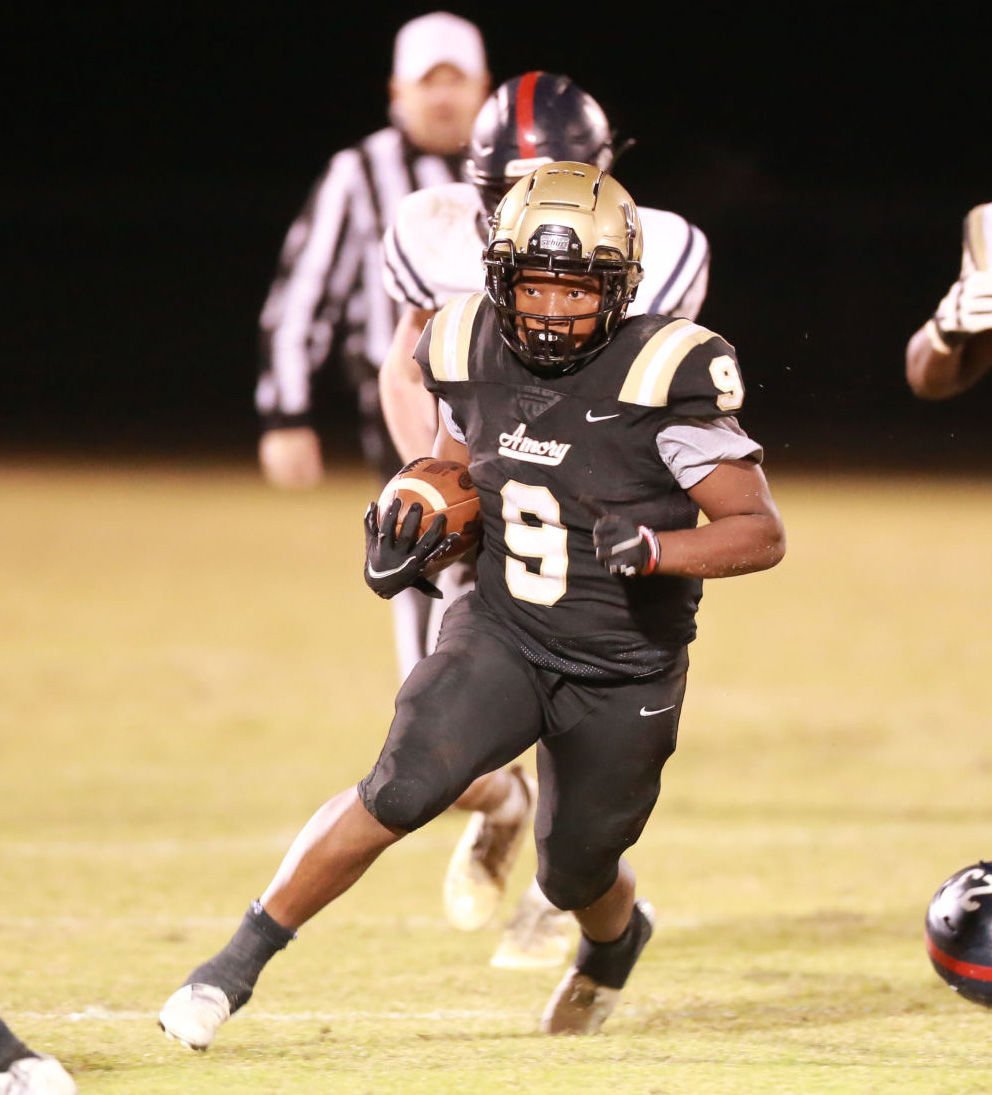 Amory running back Charleston French had his first 200-yard rushing game of his career with 226 yards on 32 carries. 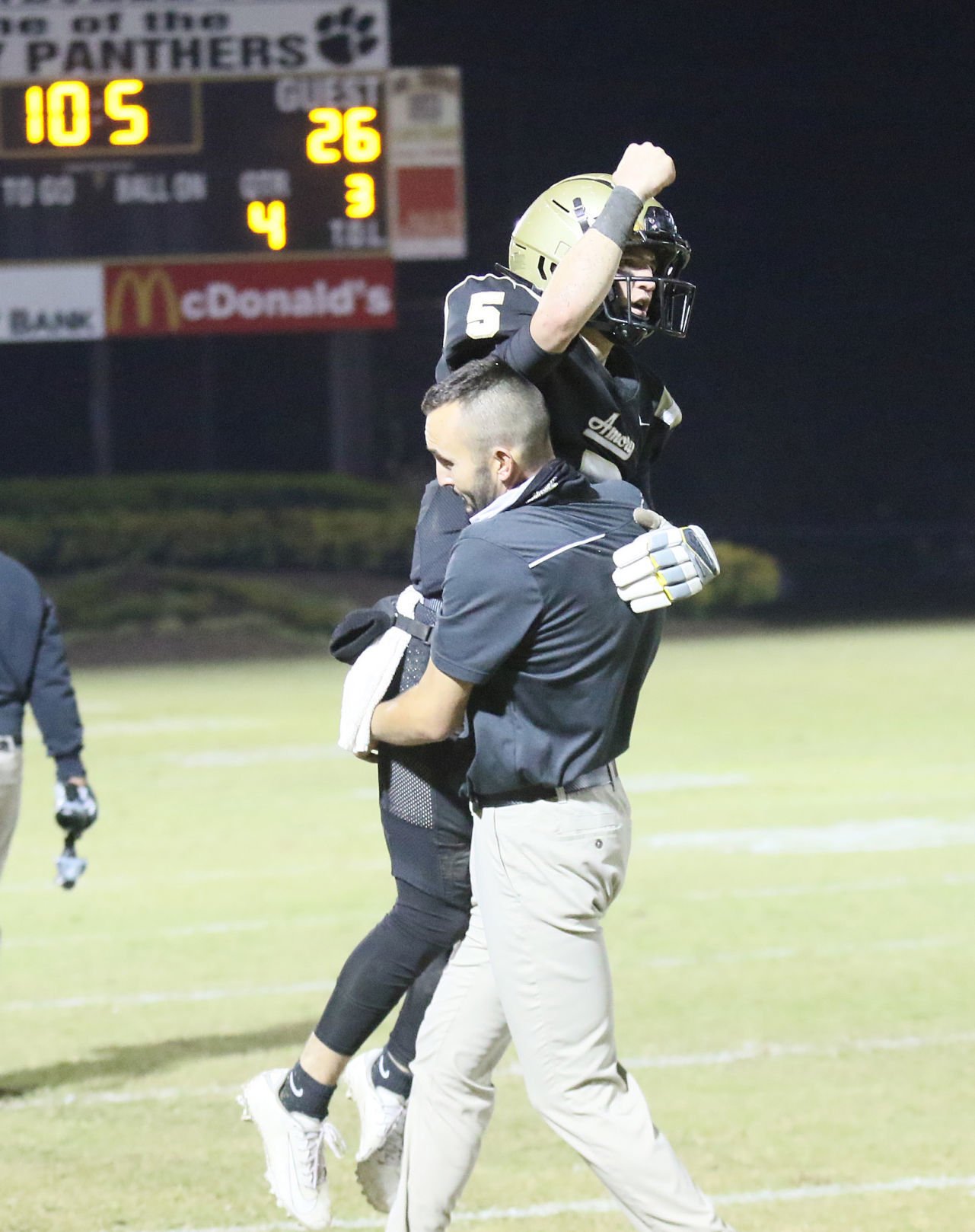 Amory quarterback Hunter Jones is lifted by assistant coach Tyler Rosenthal after his TD pass to Braxton Griffin for the win. 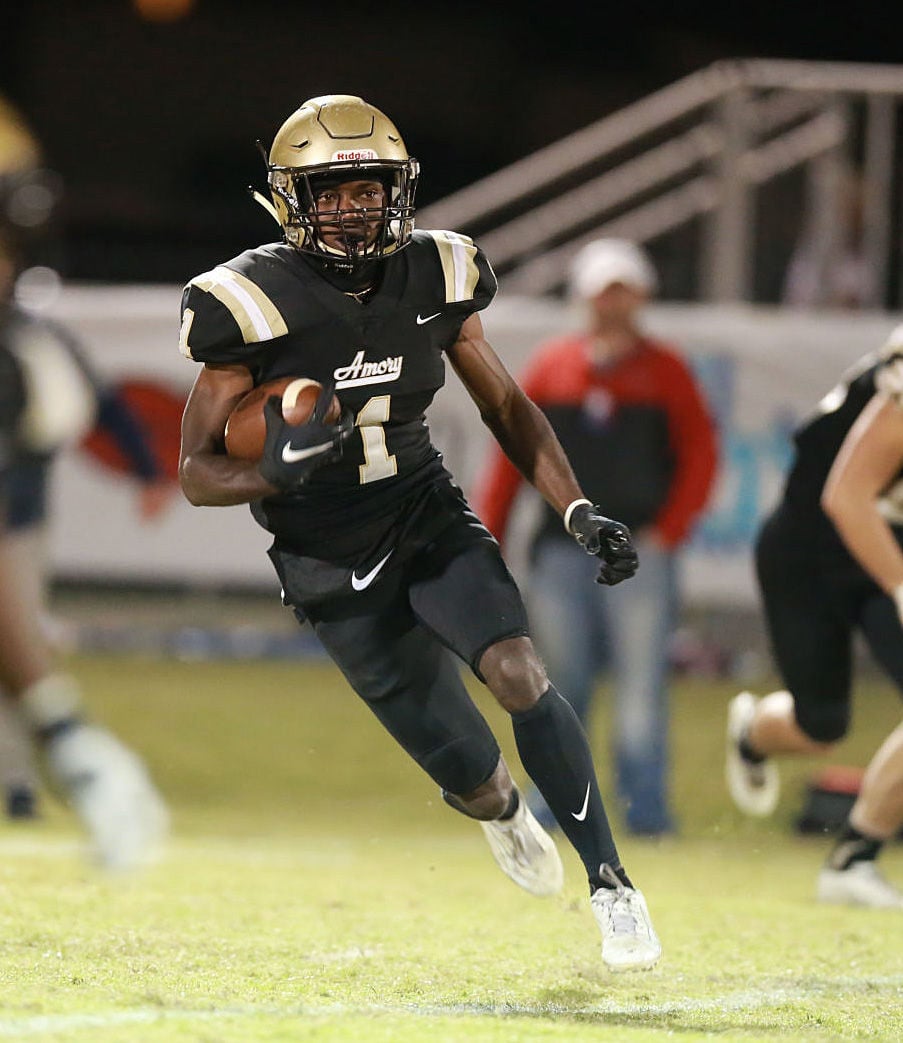 Amory’s Jay Hampton hauled in the pass that got the Panthers down to the 2-yard line to set up their final touchdown. 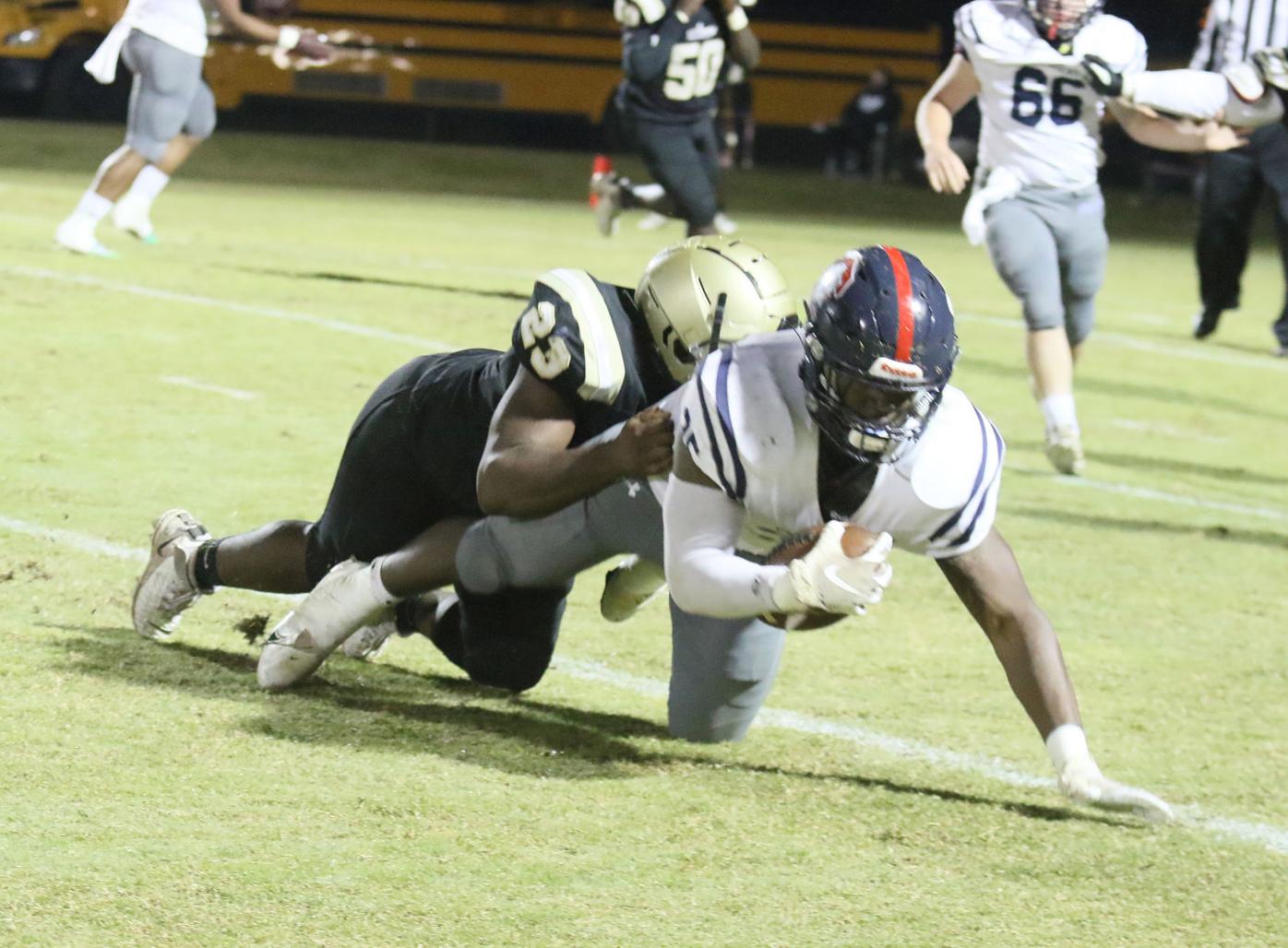 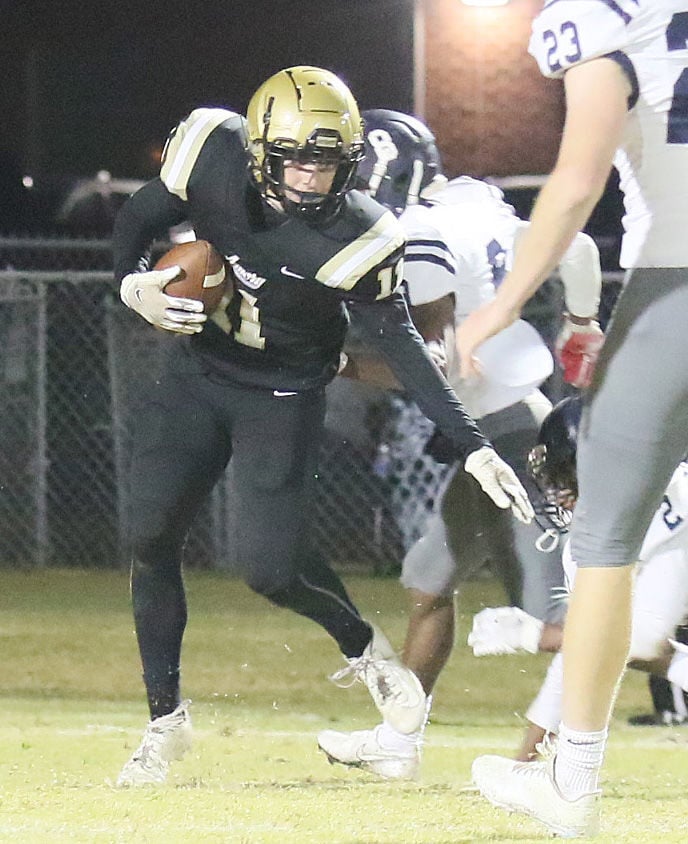 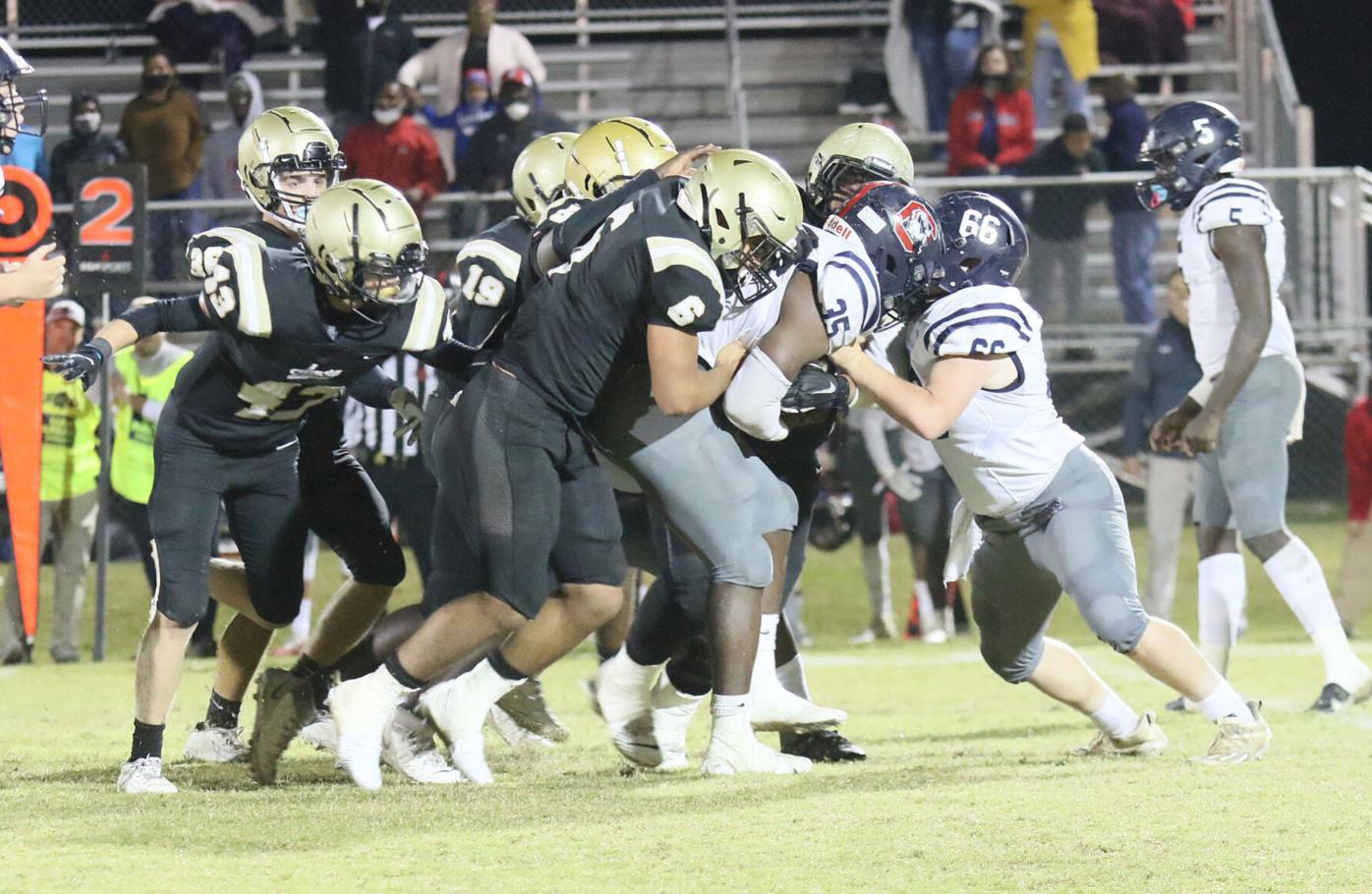 Amory’s Braxton Griffin is mobbed by his teammates after his game-winning catch with 10 seconds to go.

Amory running back Charleston French had his first 200-yard rushing game of his career with 226 yards on 32 carries.

Amory quarterback Hunter Jones is lifted by assistant coach Tyler Rosenthal after his TD pass to Braxton Griffin for the win.

Amory’s Jay Hampton hauled in the pass that got the Panthers down to the 2-yard line to set up their final touchdown.

AMORY – The Amory Panthers found up a little magic in the tank in the closing seconds of their Class 3A second-round playoff game on Friday night.

Trailing 26-20 to Choctaw County with just 28 seconds to go, Hunter Jones found a wide-open Jay Hampton for a 63-yard pass to get down to the 2-yard line to set up a game-tying touchdown strike to Braxton Griffin. Bryn Camp hit the extra point as the Panthers pulled off the 27-26 comeback to advance to face Winona.

“Jay made that big catch, and he let the team know that he had us, and Hunter let us know all night that he had us,” Griffin said. “Our defense kept us up all game, and we had to let them know that we had them on the back end of that to make plays. They held them good all night, and we just had to hold up our end and go score.”

It’s Amory’s first playoff win since 2016 when they also made it to the third round.

“This goes back to guts,” Amory coach Allen Glenn said. “I told them at the beginning of the week to bring your guts, and they did all night. We faced adversity all night and squandered some things offensively in the first half, but our defense played one heck of a game all night. I can’t say enough about the guts of our kids, and it’s a testament to them. They played their hearts out.”

Amory’s defense started off its strong night with a quick three and out to open the game, but found themselves behind after the first offensive drive ended with an interception.

The Chargers got the ball at the Panthers’ 42-yard line, and a fumble that they recovered pushed them back three yards. Quarterback Tylan Carter broke free on the next play, however, on a 45-yard run to go up 7-0 with 8 minutes left in the first quarter.

Charleston French helped the Panthers get in the red zone, but they were stuffed on third and goal and Camp came out for a 21-yard field goal to cut the lead to 7-3.

Choctaw pushed ahead 14-3 on Carter’s second touchdown run of the night with 10:55 left in the second quarter.

French’s running once again set up a first and goal, and Jones appeared to score on a keeper on the next play but a block in the back and a personal foul pushed the Panthers back to third and 31 and eventually forced to punt.

The defense came through again as Walker Maranto tipped it and Jakobey Cope picked off Carter’s pass and took it to the house for a pick six to cut the Chargers’ advantage to 14-10 and give the Panthers some momentum.

The Chargers were driving on their next possession but James Conner helped kill that drive with a sack.

Amory opened the third quarter with the ball but that was short-lived after a fumble on the first play.

Conner and Reece Cantrell led the next defensive stop, coming up with back-to-back sacks, then John Isaac Wallace tipped a pass on fourth down to get the Panthers the ball back.

“We gave up a couple of big plays, but we fought hard all night,” Wallace said. “Coach told us that they were going to be a running team, and we did our best to stop the run.”

The offense started at the 10-yard line, but French and Jones kept it on the ground to pick up the first 28 yards. Griffin hauled in a first-down catch before his next one was just short of the first down, forcing another punt.

The Panthers cut it to a one-point game after another defensive stop, good field position on the punt return and a 28-yard catch from Corbin Gillentine set up Camp’s second field goal of the night.

The Chargers made it 20-13 on another big play on Carter’s 78-yard strike to Ques McNeal to end the third quarter.

Amory answered with a 75-yard scoring drive of its own.

Hampton had a big return that was wiped out by a block in the back, but French got those yards back. Jones found Gillentine and Griffin each for big catches to get inside Charger territory. French put them inside the 20, and Gillentine snagged a Jones pass over the middle for an 18-yard touchdown reception to tie it at 20-20 after Camp’s extra point.

Wallace recovered a fumble to give the offense the ball back with four minutes to go, but the Chargers came up with the stop on fourth down.

A good punt return on their next drive set them up inside Amory territory, and Carter found Clark Crowley to retake the lead at 26-20 after the missed extra point with 28 seconds to go. Bo Rock quickly called for a fair catch on the kickoff to not waste any time off the clock.

Hampton got ahead of his defenders as Jones hit him square in the hands for the 63-yard catch. He was dragged down at the 2-yard line to set up first and goal.

“I told them all night that I wasn’t going home,” Hampton said. “When your number is called, you have to make the play.”

Jones’ keeper didn’t gain much on first and goal, but on the next play, he hit Griffin, who cut to the edge on the 2-yard touchdown reception to tie it at 26-26.

“Our defense was the difference this year,” Jones said. “Hats off to them because they won the game for us, and offense struggled all night. Coming down to that last drive, I talked to everybody and told them it’s not over until it’s over. I saw Jay open and gave him a chance, and then we had a great play call there at the end with Braxton making a great catch.”

Penalties and timeouts forced Camp to kick the extra point a few times, but he made all of them, including the one that counted for the win, and Connor Monaghan and Maranto made the stop on the kickoff to seal it.

French ended with his first 200-plus yard game with 226 on 32 carries, while Jones was 13 of 19 passing for 190 yards, two touchdowns and an interception. Griffin had six catches for 50 yards, Gillentine four for 62 yards and Hampton two catches for 71 yards.