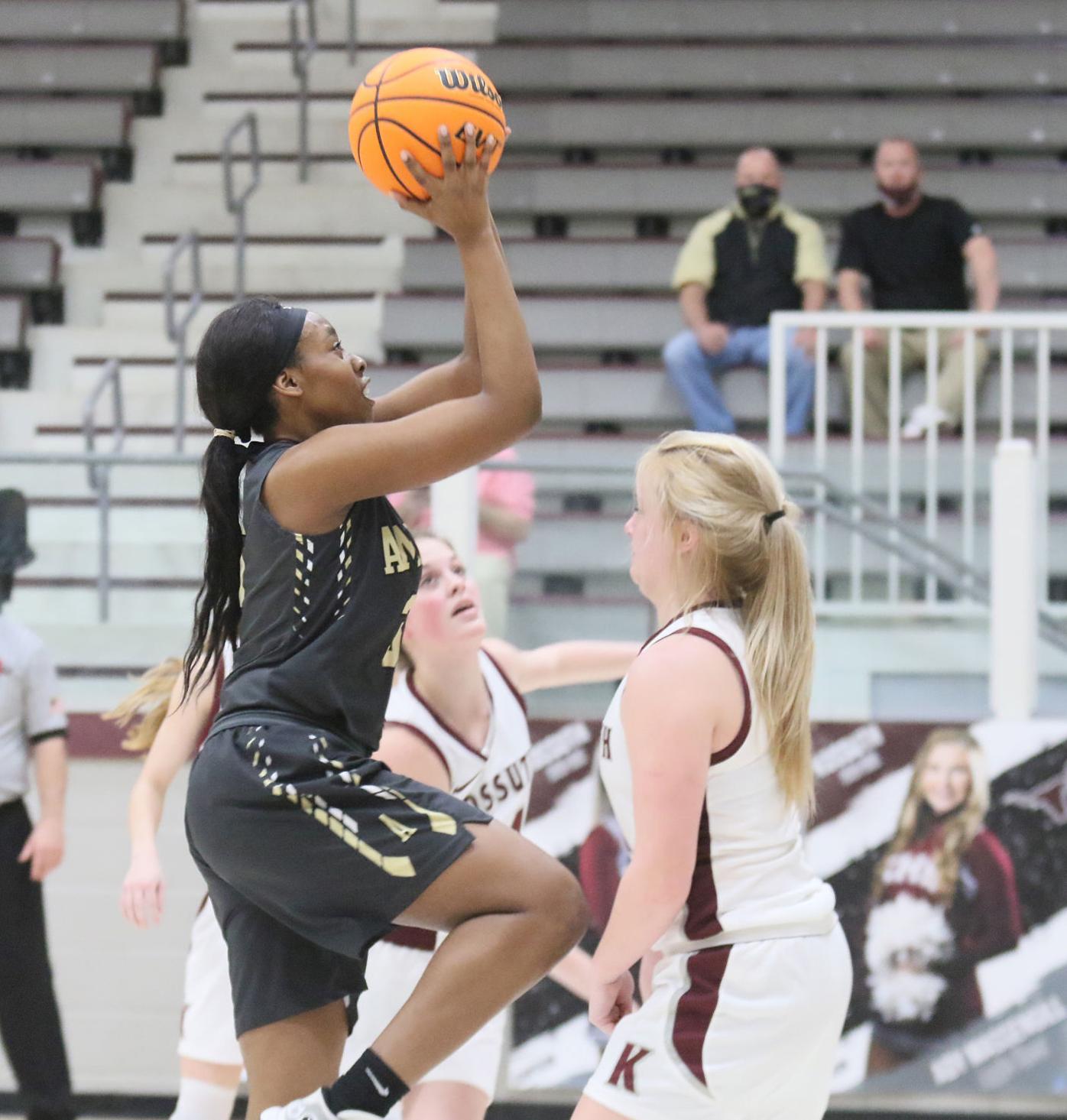 Amory’s Ashanti Smith cuts the lead to five with her basket to close the third quarter against Kossuth on Saturday. 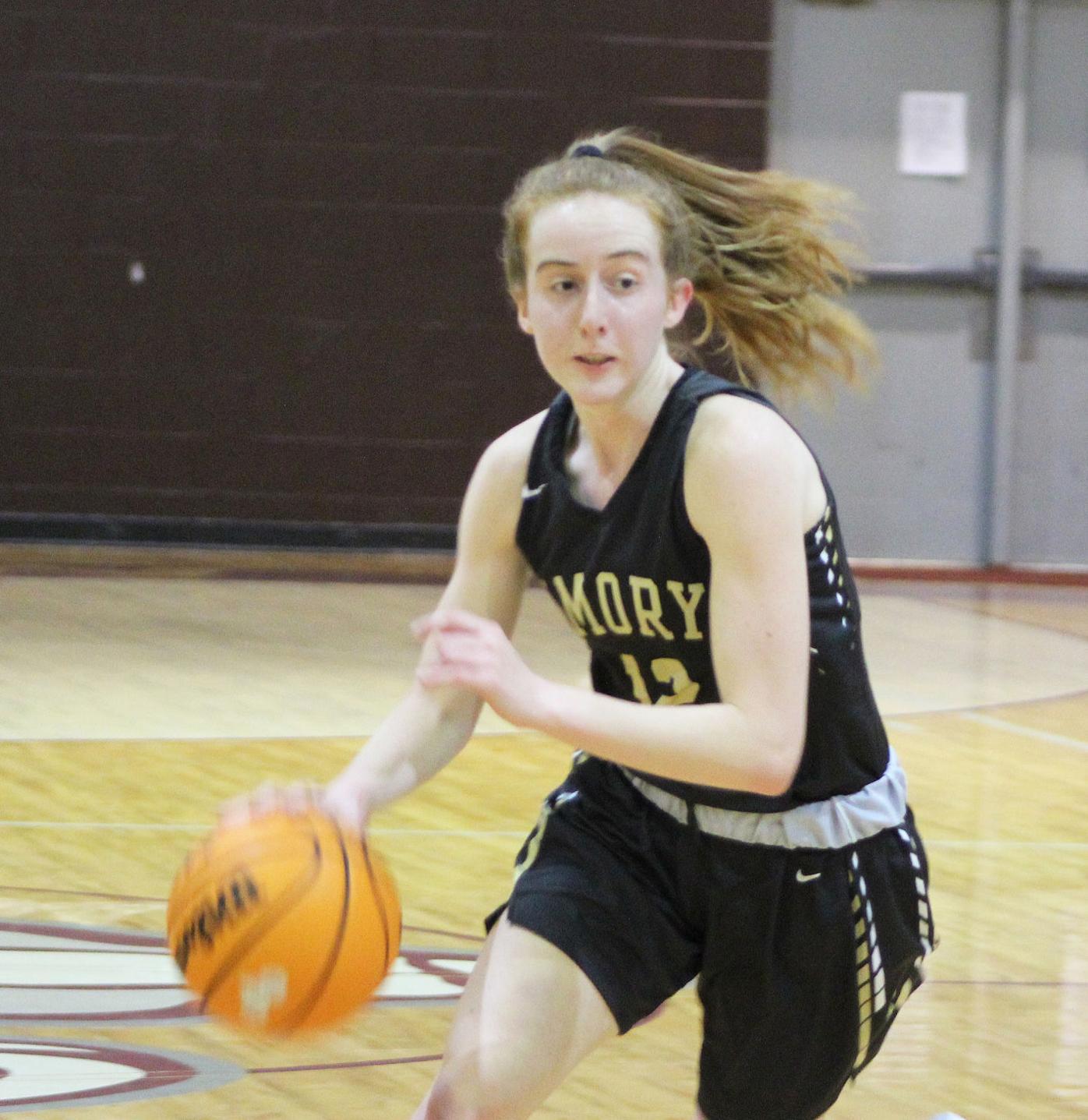 Amory’s Emma Kate Wright led the Lady Panthers with her 12 points in the first round win over Houston. 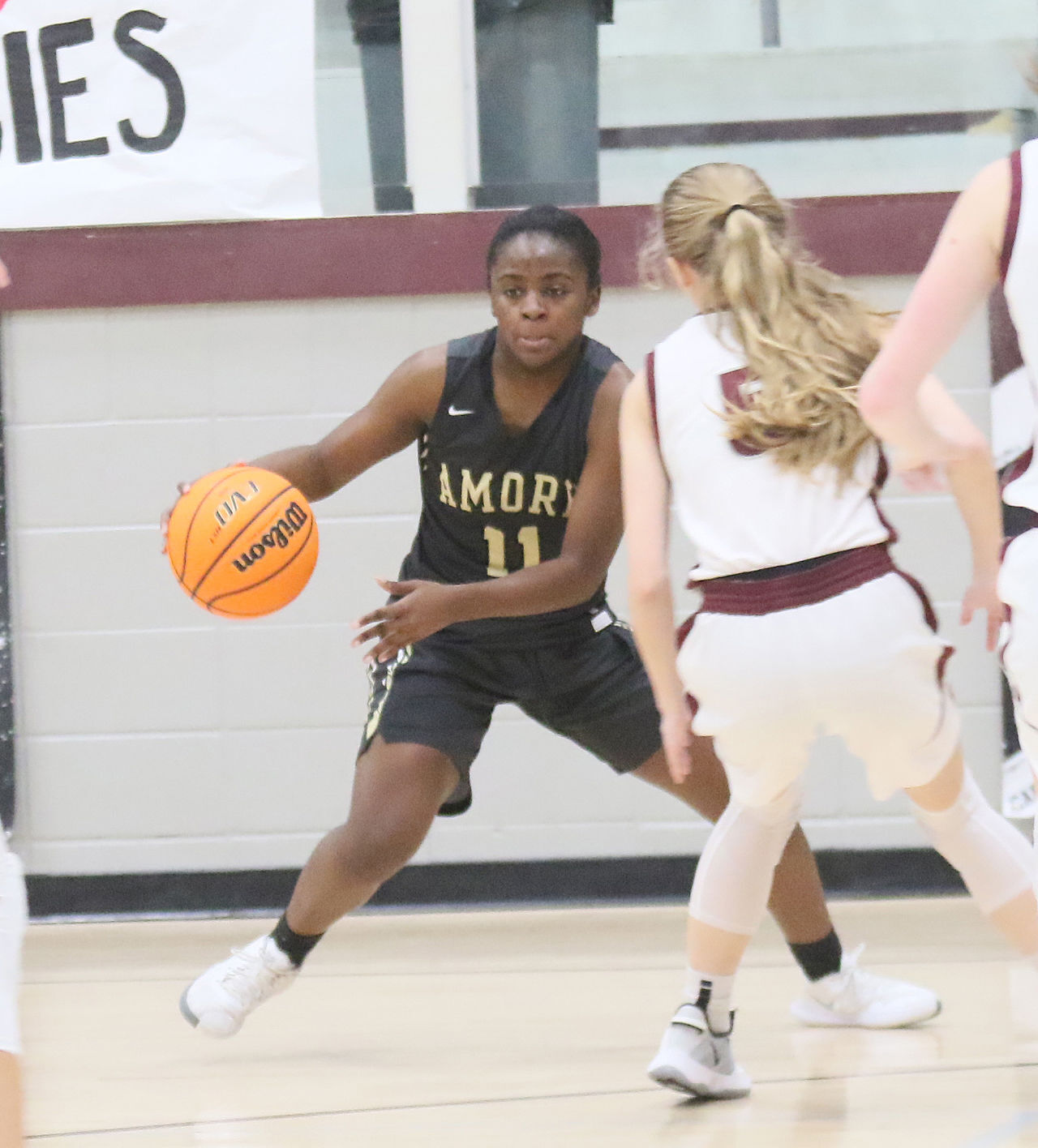 Amory’s Jatavia Smith led all scorers with a game-high 17 points against Kossuth. 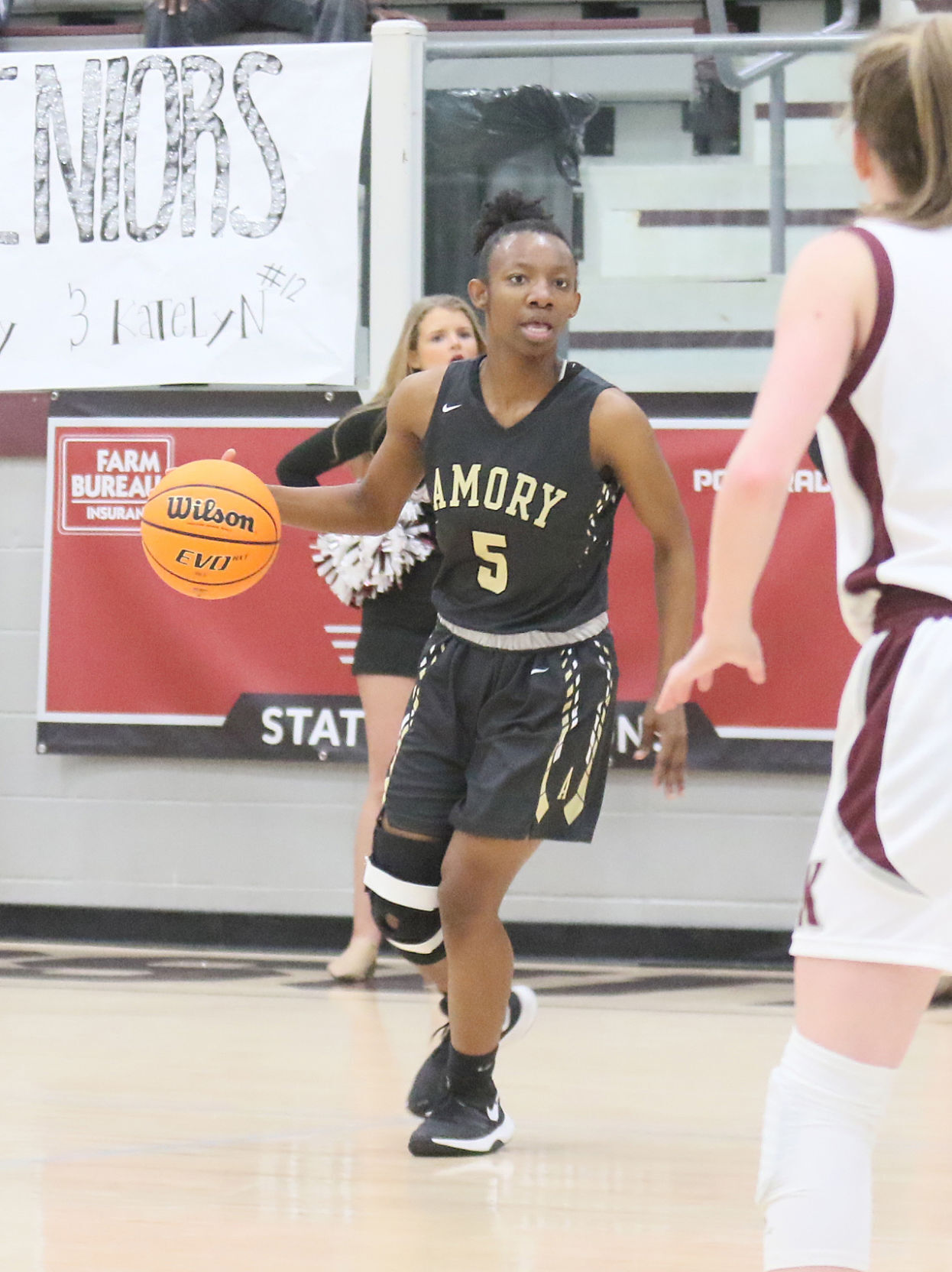 Amory’s Amiya Robinson came back from injury to play in the final two rounds of the playoffs. 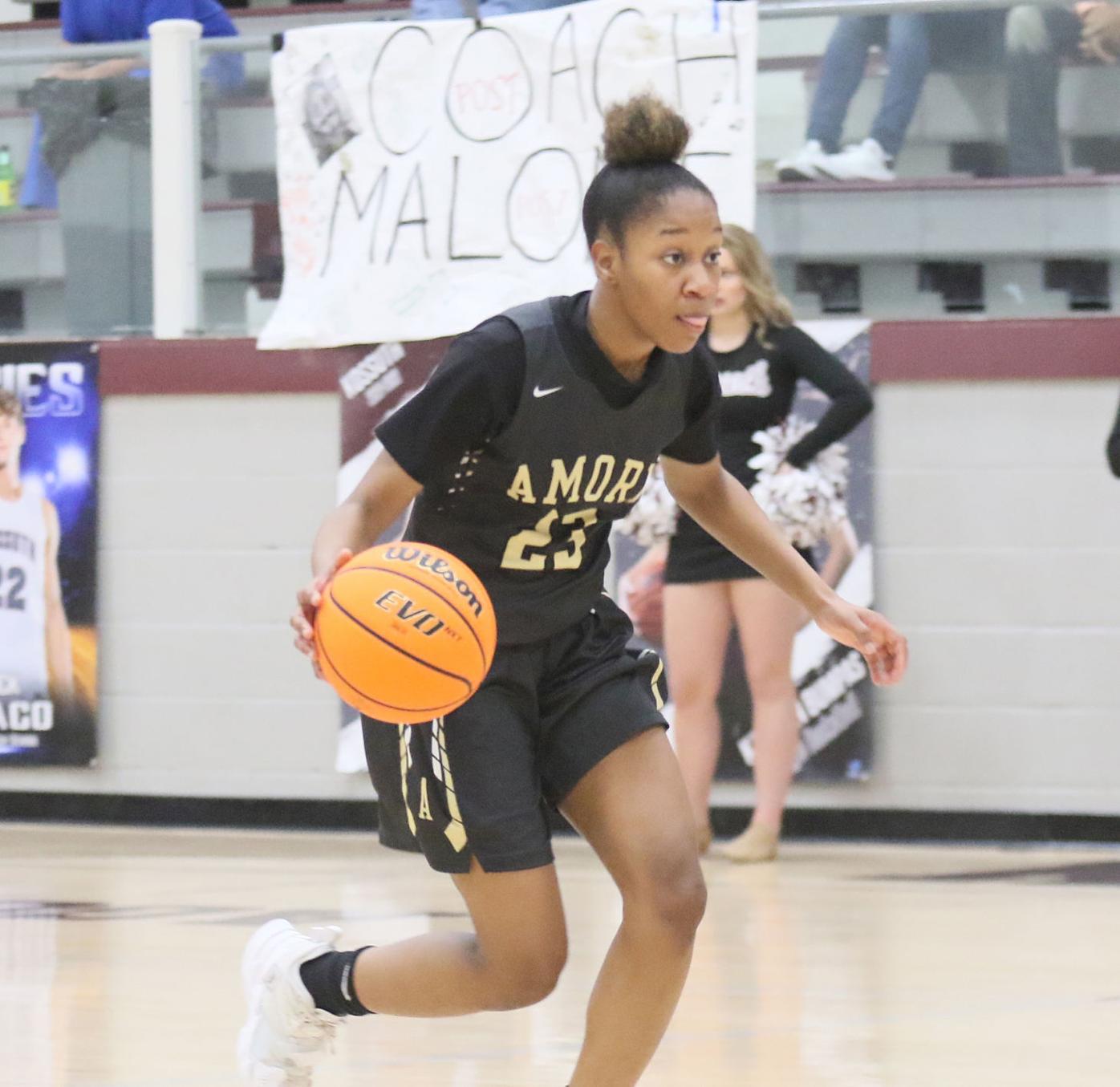 Amory’s Amaya Trimble takes a steal to the basket in the fourth quarter against Kossuth. 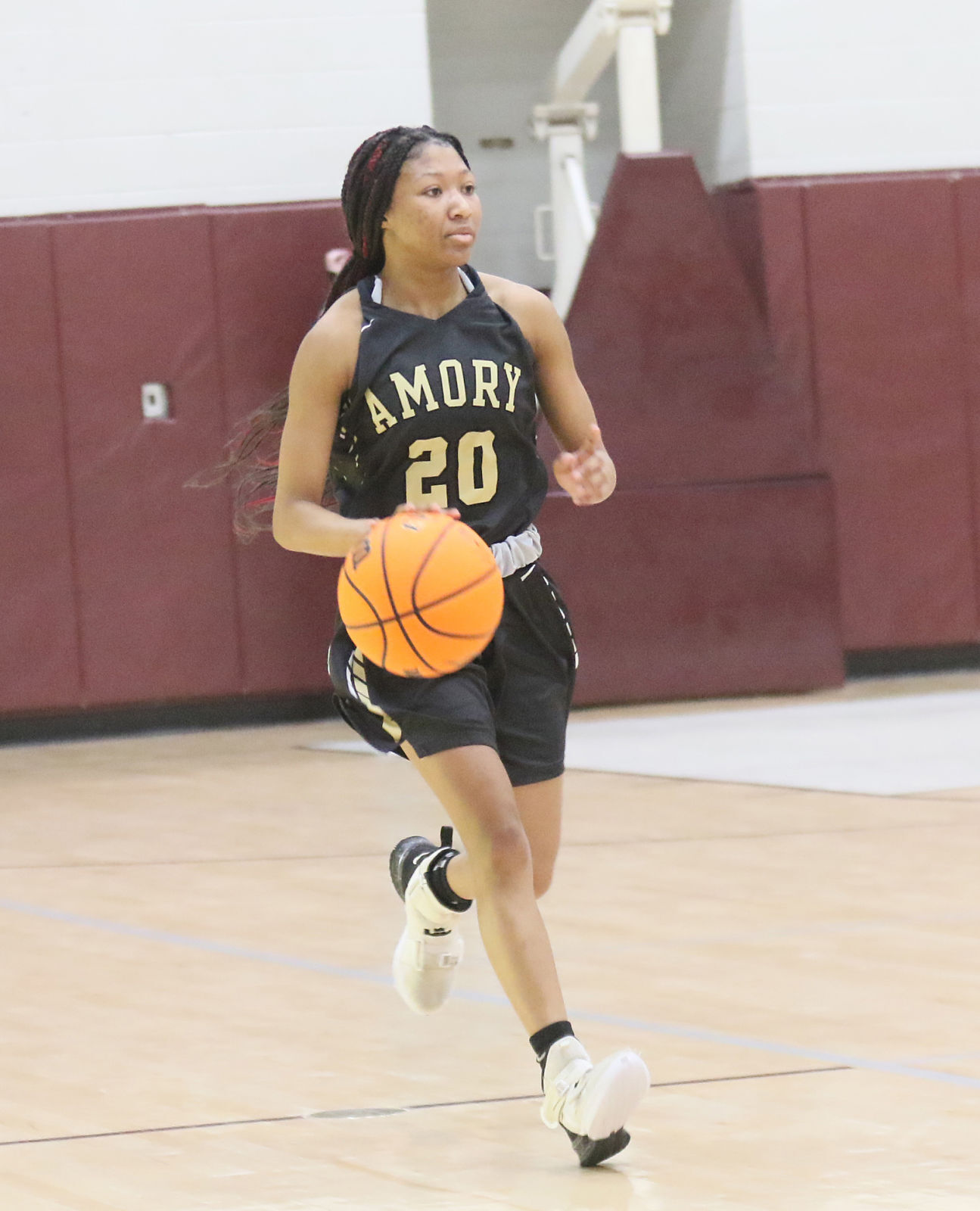 Amory’s Jayda Sims brings the ball down the floor in the third quarter against Kossuth.

Amory’s Ashanti Smith cuts the lead to five with her basket to close the third quarter against Kossuth on Saturday.

Amory’s Emma Kate Wright led the Lady Panthers with her 12 points in the first round win over Houston.

Amory’s Jatavia Smith led all scorers with a game-high 17 points against Kossuth.

Amory’s Amiya Robinson came back from injury to play in the final two rounds of the playoffs.

Amory’s Amaya Trimble takes a steal to the basket in the fourth quarter against Kossuth.

Amory’s Jayda Sims brings the ball down the floor in the third quarter against Kossuth.

KOSSUTH – Amory’s deep playoff run came just a step short on Saturday afternoon at the hands of a familiar foe as the Lady Panthers’ season ended in a 59-47 loss at Kossuth in the third round of the playoffs.

The Lady Panthers were able to keep it close until two key threes from the Lady Aggies in the final three minutes allowed them to start to pull away and seal the win.

“From the beginning of the year to the end, this has been the most growth of any program I have been a part of,” Amory coach Nathan Newell said. “We always knew we had athletes and a bunch of talented individuals, and to see them grow together and bond as a team with losses, quarantines and some stepping out and quitting on you, we didn’t quit as a team. We came together, faced those adversities, and we ended up finishing a lot better ballclub than we started.”

Kossuth started the game with a 4-0 lead, but Jatavia Smith quickly cut that to one with her three-pointer to open Amory’s scoring. The Lady Panthers trailed by four at 11-7 at the end of the quarter with Smith and Amaya Trimble doing all the scoring.

Laney Howell opened the second with a free throw, but the Lady Aggies went on a 9-0 run to go up 20-8. Smith ended Amory’s drought nearly three minutes in, and she and Amiya Robinson cut it to six before a technical foul stretched the lead back out. Howell made all three from the line to start to get the Lady Panthers back closer, and Trimble kept the run going to cut it to 22-19.

Katie Meeks scored the final points of the first half to put Kossuth up 24-19 at the break.

Ashanti Smith made it a three-point game again with her layup to start the third, but Kossuth answered with a quick 6-0 run. Howell sank a three to end a three-minute scoring drought for Amory, and Jatavia Smith kept the run going with back-to-back baskets to cut it to two at 30-28. The Lady Aggies were able to stretch it back out to seven before Ashanti Smith’s bucket made it a five-point game at 35-30 going into the fourth.

Amory stayed within that striking distance early in the fourth as Robinson, Jatavia Smith and Ashanti Smith all scored for the Lady Panthers before Katelyn Bumpas’ pair of threes got Kossuth’s lead to double digits.

Jatavia Smith’s 17 points in the loss led all scorers.

“I give all the credit in the world to our girls, I challenge them every day,” Newell said. “They always step up to the challenge, even today. Our game plan was to shut down 12 (Katelyn Bumpas) and 41 (Zoe Essary), and for the most part, we did that, and they just had some other girls who were able to score.”

Amory dominated from start to finish in another road win, this one 60-33 on the road at Amanda Elzy in the second round.

The Lady Panthers led by just four at 14-10 at the end of the first, leading the way from the free-throw line with Amiya Robinson, Jatavia Smith and Amaya Trimble. Emma Kate Wright also hit a three in the first quarter.

Amory was able to widen the gap in the second quarter, riding a 30-15 halftime lead. Howell had nine points in the quarter, while Robinson and Wright each added a pair from the line and Trimble had another basket.

Trimble set the pace for the Lady Panthers in the third, extending their lead to 43-24 as she had seven in the quarter and Jillian Cox and Ashanti Smith helped her push the advantage out.

Howell, Trimble, Wright, Cox, Jatavia Smith and Ashanti Smith all scored in the final quarter to ice the win.

Trimble led with 14 points, while Howell scored 11 and Wright finished with 10.

Nathan Newell pleaded for his team to play defense for four quarters, and they answered the call last Monday night.

Amory locked in defensively to knock off a short-handed Houston squad on the road, 48-29, in the first round.

“Going into someone else’s house and getting a big win, especially in a playoff atmosphere, is a good feeling,” Newell said.

Amory led 9-6 at the end of the first quarter as both teams struggled to find a rhythm. But the Lady Panthers held Houston (13-9) to just one field goal in the second quarter, coming at the 1:17 mark, as Jayda Sims and Ashanti Smith provided a spark off the bench, combining for a 10-0 run midway through the period to take a 12-point lead.

“That was huge, especially with it being from girls off our bench,” Newell said. “Jayda started tonight, due to Amiya Robinson being out, but she’s been stepping it up the last few games, and Ashanti Smith – that’s the one we were high on early in the year. She kind of started out slow, but she’s really come on these last few games.

The Lady Hilltoppers were dealt a bad hand from the start, down four starters due to various injuries, including leading scorer Amber McIntosh (16.2 ppg), who was out with an ankle injury.

The lack of depth really showed on offense, where Houston turned the ball over 24 times and was 9 of 37 (24.3%) from the field.

“I thought defensively we were fine. We just couldn’t score,” Houston coach Chris Petit said. “We missed a couple of layups early, and I think we got in our heads a little bit. (Amory) turned us over in that full-court man, and that’s where missing those starters hurt.”

Here are some tips to care for spring flowering bulbs

Atmos Energy reminds everyone to call 811 before any digging project

Jail staff works behind the scenes of justice system