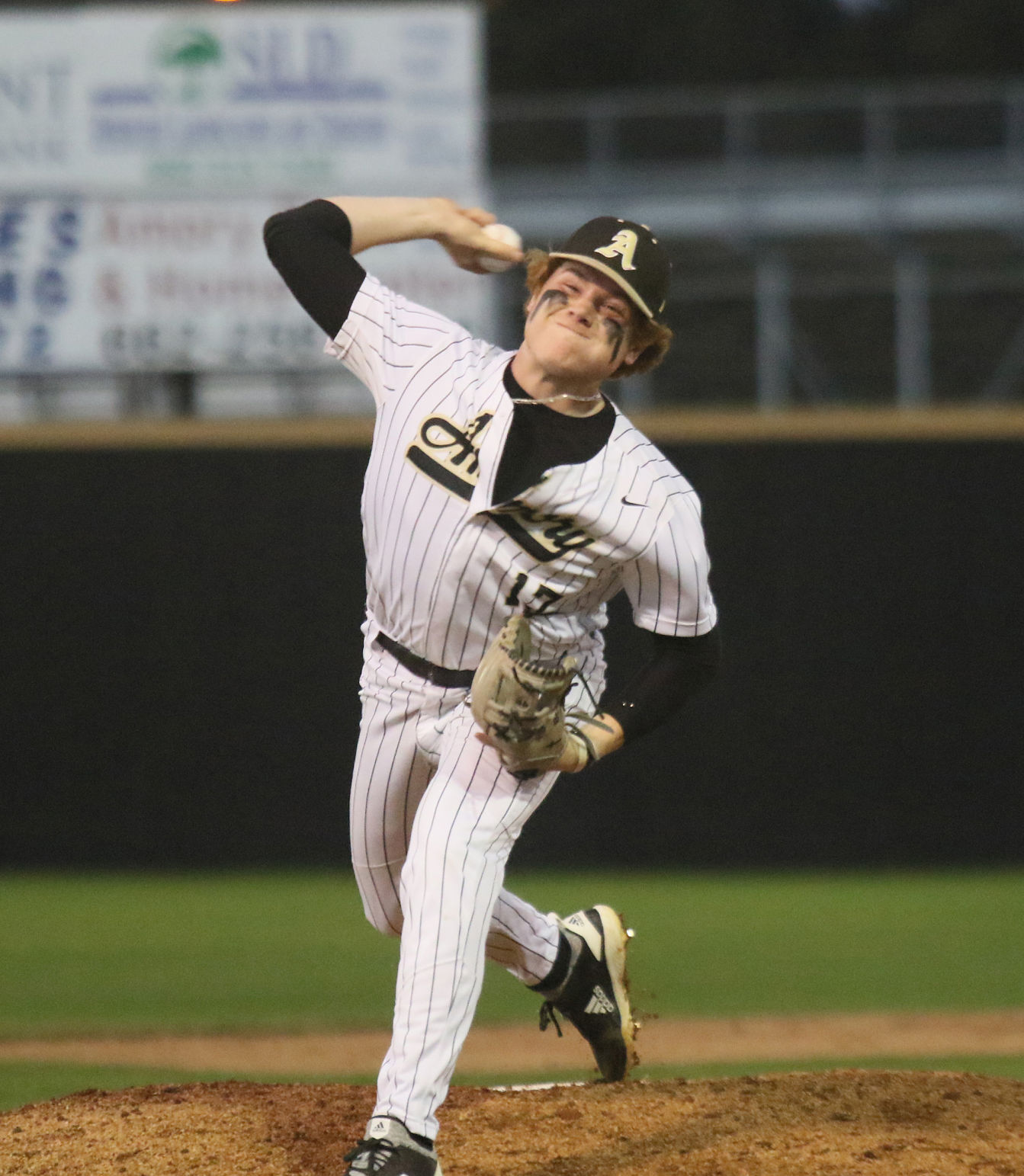 Amory’s Bo Rock struck out nine in five innings and went 3 for 3 at the plate last Monday against Belmont. 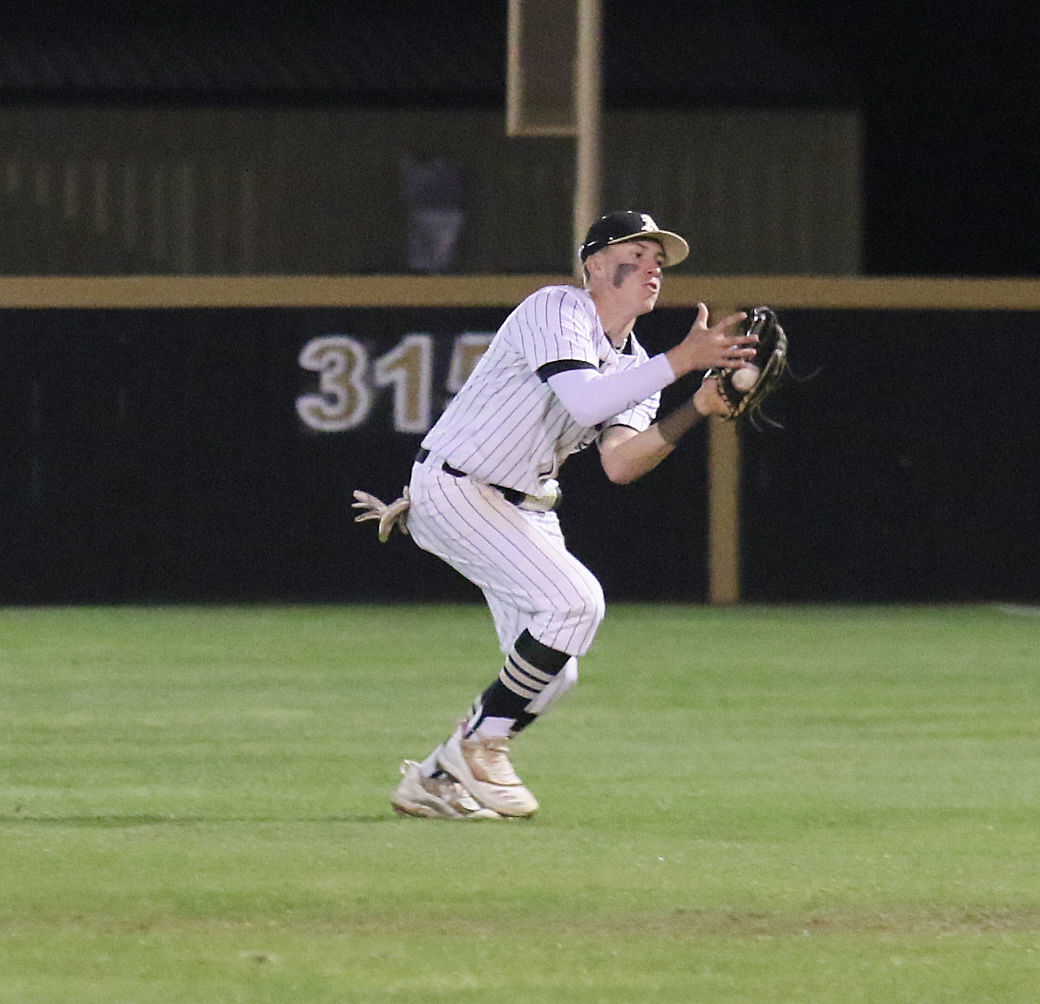 Amory second baseman Reed Stanford hangs on to a catch on the edge of the outfield grass. 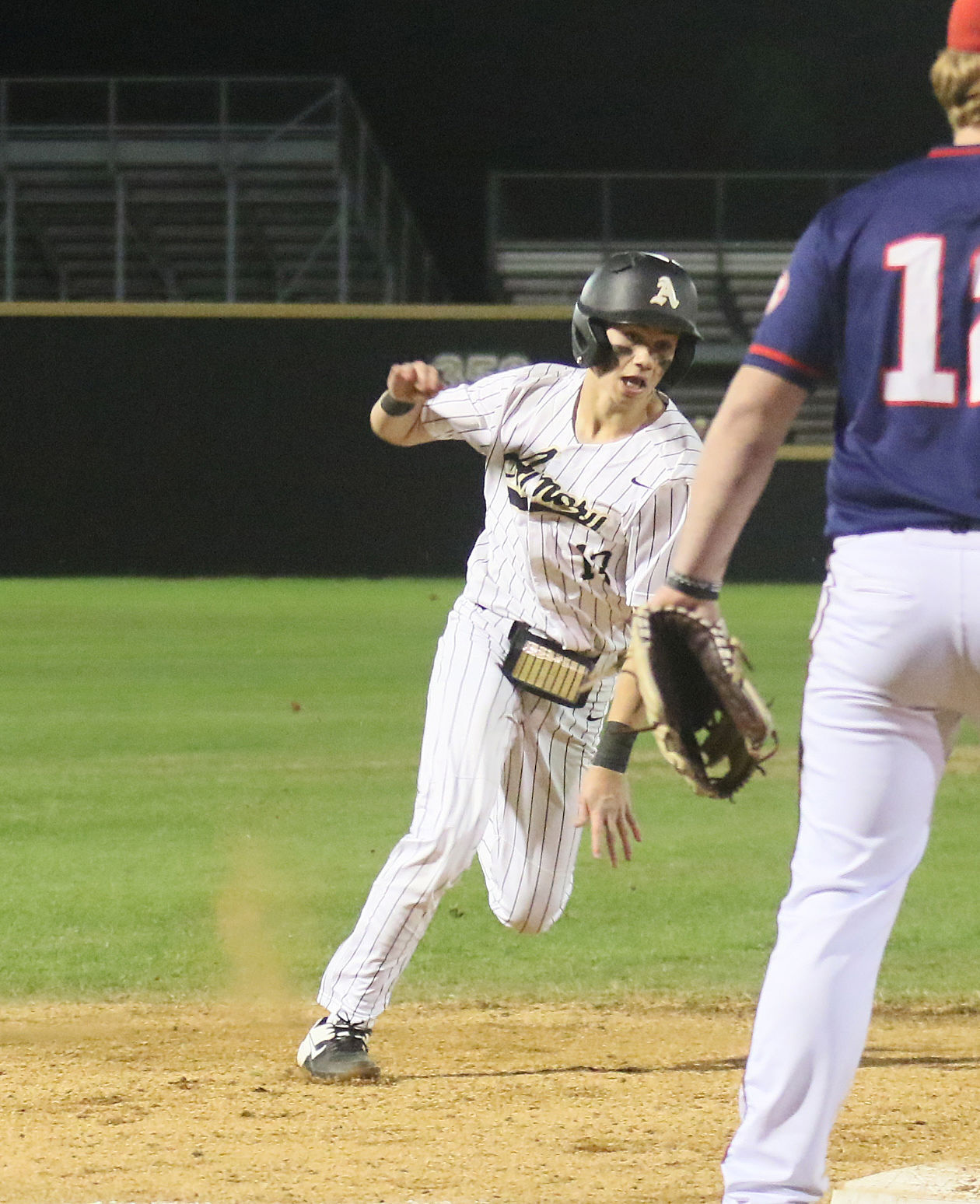 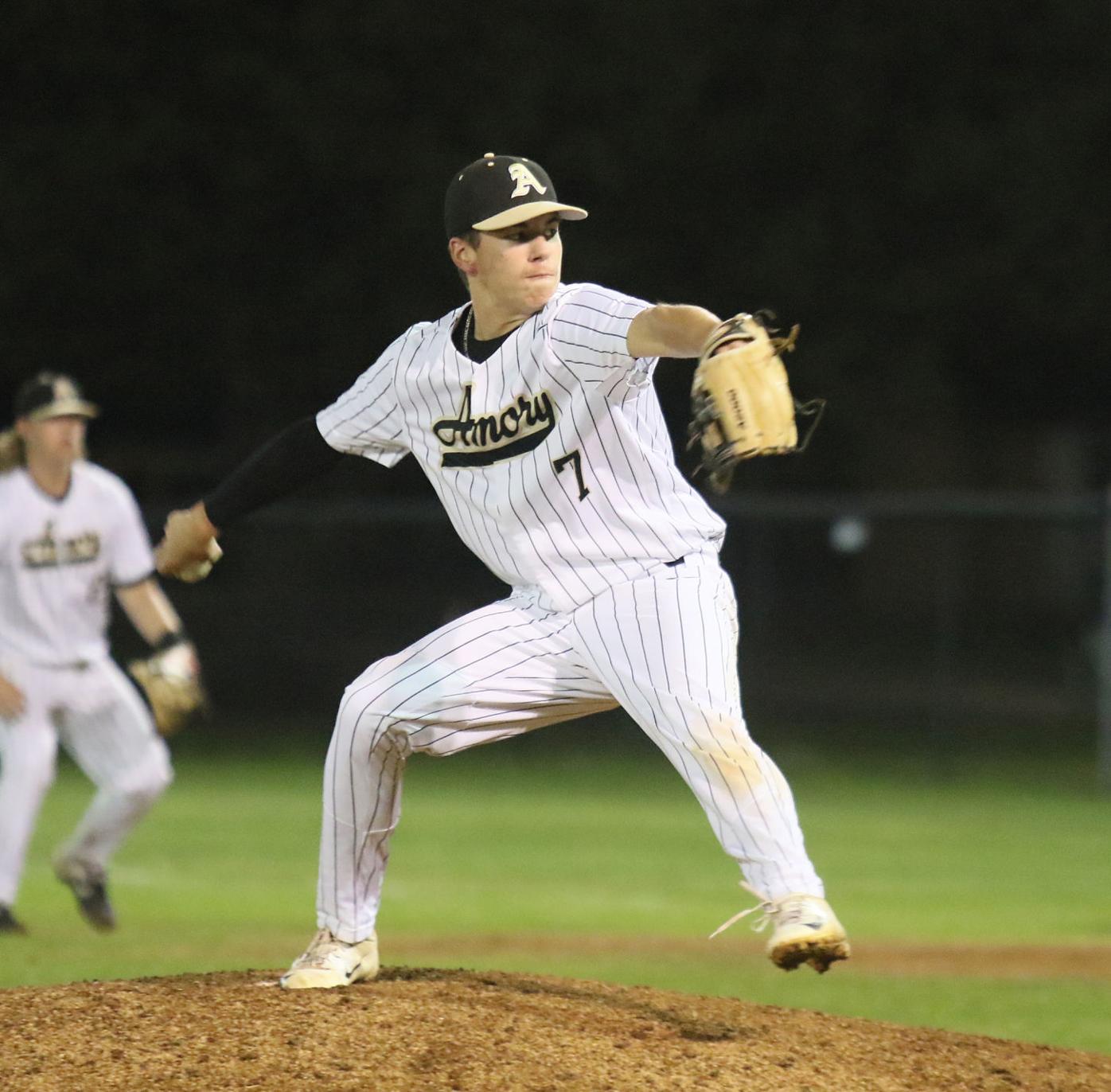 Amory’s Bryce Glenn closed out Monday’s win over Belmont with a pair of scoreless innings. 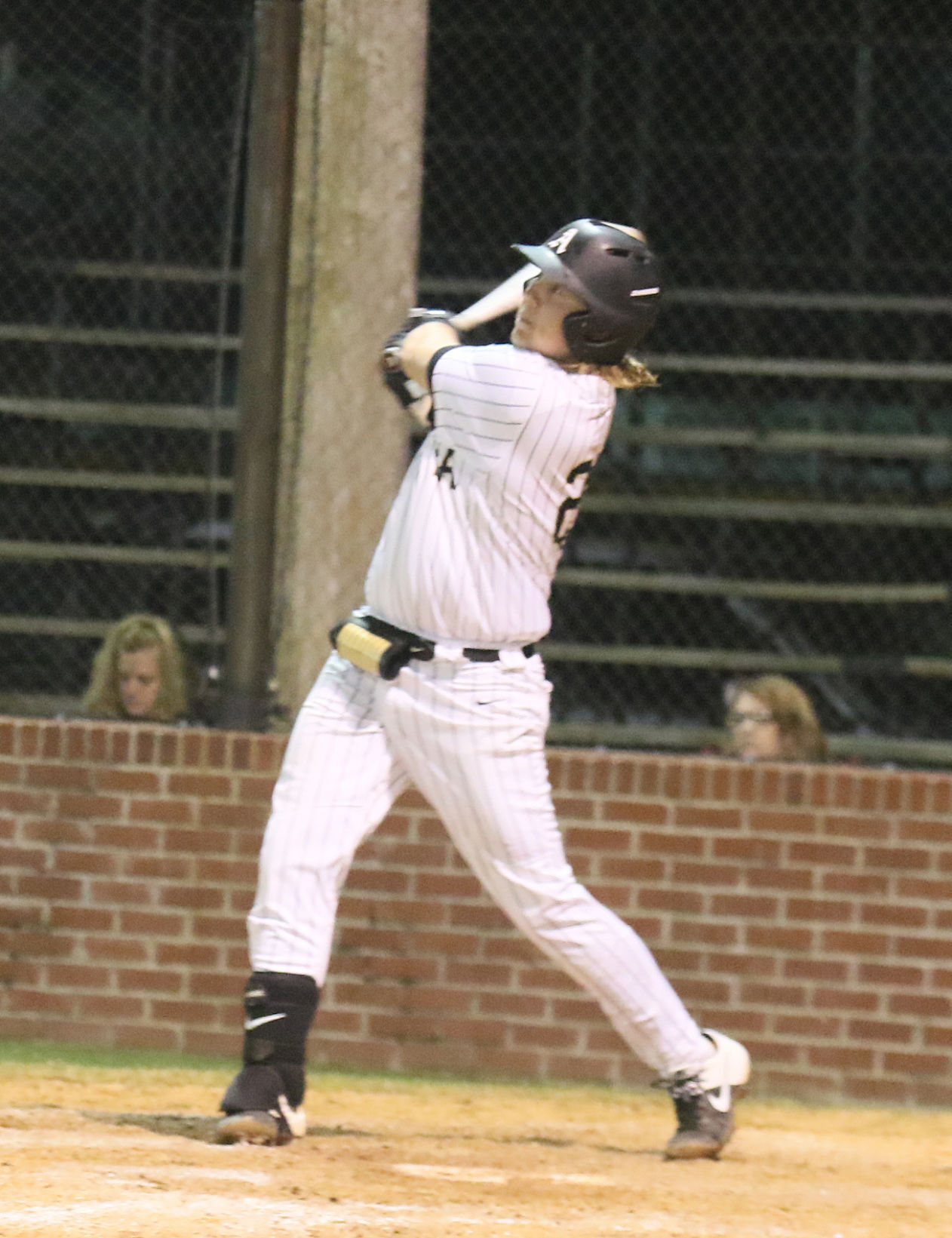 Amory’s Ethan Kimbrough went 2 for 4 in Game 1 against Belmont.

Amory’s Bo Rock struck out nine in five innings and went 3 for 3 at the plate last Monday against Belmont.

Amory second baseman Reed Stanford hangs on to a catch on the edge of the outfield grass.

Amory’s Bryce Glenn closed out Monday’s win over Belmont with a pair of scoreless innings.

Amory’s Ethan Kimbrough went 2 for 4 in Game 1 against Belmont.

AMORY – The Amory Panthers rebounded from a tough start to division play, getting back on track with a sweep against Belmont.

Amory had a big six-run inning in the fourth to take the 9-2 win last Monday night and finished off the sweep by taking a late lead for an 8-6 victory on Thursday night.

“We haven’t really struggled offensively, but we have struggled to get the big hit lately,” Amory coach Cade Hoggard said. “It was good to see some guys in some big situations get some RBIs, and we had seven hits in the fourth inning, five in a row on Monday night. That’s big, and I don’t know if we have done that this season. It felt good to do that.”

The Panthers put two on in the first with walks to Bryce Glenn and Bo Rock but couldn’t cash in on the free passes for a run until the bottom of the second.

Ethan Kimbrough led off with Amory’s first hit, and with two outs, Walker Maranto and Clayton Reese drew back-to-back walks. Hunter Jones came through with the RBI when he was hit by a pitch to get Amory on the board.

Belmont took a 2-1 lead after three walks and two hits, but Rock got out of the jam by finishing off striking out the side.

The Panthers tied the game up with some baserunning in the bottom half. Rock led off with a single up the middle, and courtesy runner Will McComb moved to second on Reed Stanford’s groundout and third on a stolen base.

Tyler Sledge drew a walk and got in a rundown long enough to allow McComb to race home and tie the game up.

Amory’s bats broke through in the fourth, sending 12 to the plate and pouring on six runs.

“Their lefty (Garrett Rooker) was good, and he kept us off balance,” Hoggard said. “We got the bats going late and got him out and started swinging at balls a little better. Balls started dropping in for us, and that was good to see.”

Corbin Gillentine and Maranto each drew walks and moved up on a double steal. Reese singled to right to give the Panthers the lead, and Jones picked up another RBI with a bunt base hit. Rock and Stanford had back-to-back RBI singles to go up 7-2, and Gillentine finished it off with his RBI base hit to right to add another run.

The Panthers tacked on an insurance run in the fifth when Glenn walked, Rock picked up his third hit of the night, and Stanford drove in another run with a groundout to second. Amory threatened in the sixth on Gillentine’s single and Maranto being hit by a pitch, but the opportunity was spoiled on a double play.

“Bo was solid, and any time we can pitch the way we have been pitching, giving up one or two runs, offensively, we have to come around and give those guys support,” Hoggard said. “Bo has been pitching his tail off, and he definitely gives us a chance every time he’s out there. It was good to finally put some runs up and give him some breathing room because it’s been a high-stress situation every time he’s been in there.”

The Panthers took the lead in the sixth inning and held off a couple of Belmont charges in the final two innings to hold on for the win.

Amory took a 1-0 lead in the first after Clayton Reese led off with a hit, stole second, moved to third on Hunter Jones’ groundout and scored on Bryce Glenn’s grounder.

That would be all the Panthers could get until the fifth inning, despite a hit by Corbin Gillentine in the second and a pair of baserunners in the fourth.

Belmont took a 3-1 lead in the bottom of the fourth, taking advantage of a hit by pitch, a walk and three hits, all with two outs.

Amory answered quickly, tying it in the fifth. Walker Maranto led off with a walk, and Reese reached on an infield hit. Maranto scored on a double steal, and Jones brought in Reese with a bunt RBI single.

Belmont went back on top in the bottom of the inning, but Tyler Sledge stranded a pair of runners with a strikeout.

The Panthers retook the lead for good in the sixth, putting up four runs. Amory loaded the bases when Ethan Kimbrough was hit by a pitch, Gillentine put down a bunt single and John Isaac Wallace drew a walk.

Maranto tied the game up with a sacrifice fly, and Jones reached on an error to send home two runs and give Amory the lead, later scoring on a wild pitch to make it 7-4.

Belmont crept a run closer in the bottom of the sixth, but Jones came on in relief and got a pair of strikeouts to leave the bases loaded and get out of the jam.

Amory tacked on an insurance run in the top of the seventh after hits from Reed Stanford and Wallace, and Jones worked around a pair of errors in the bottom of the inning with two strikeouts to hold on for the win.

Sledge struck out eight in the start, while Jones struck out four in relief.

Bo Rock went 2 for 4 with a double and an RBI, while Reed Stanford also hit a double and drove in a pair of runs. Hunter Jones picked up the win in relief, with four scoreless innings, allowing one hit, walking two and striking out three. Corbin Gillentine made the start, striking out five in four innings.