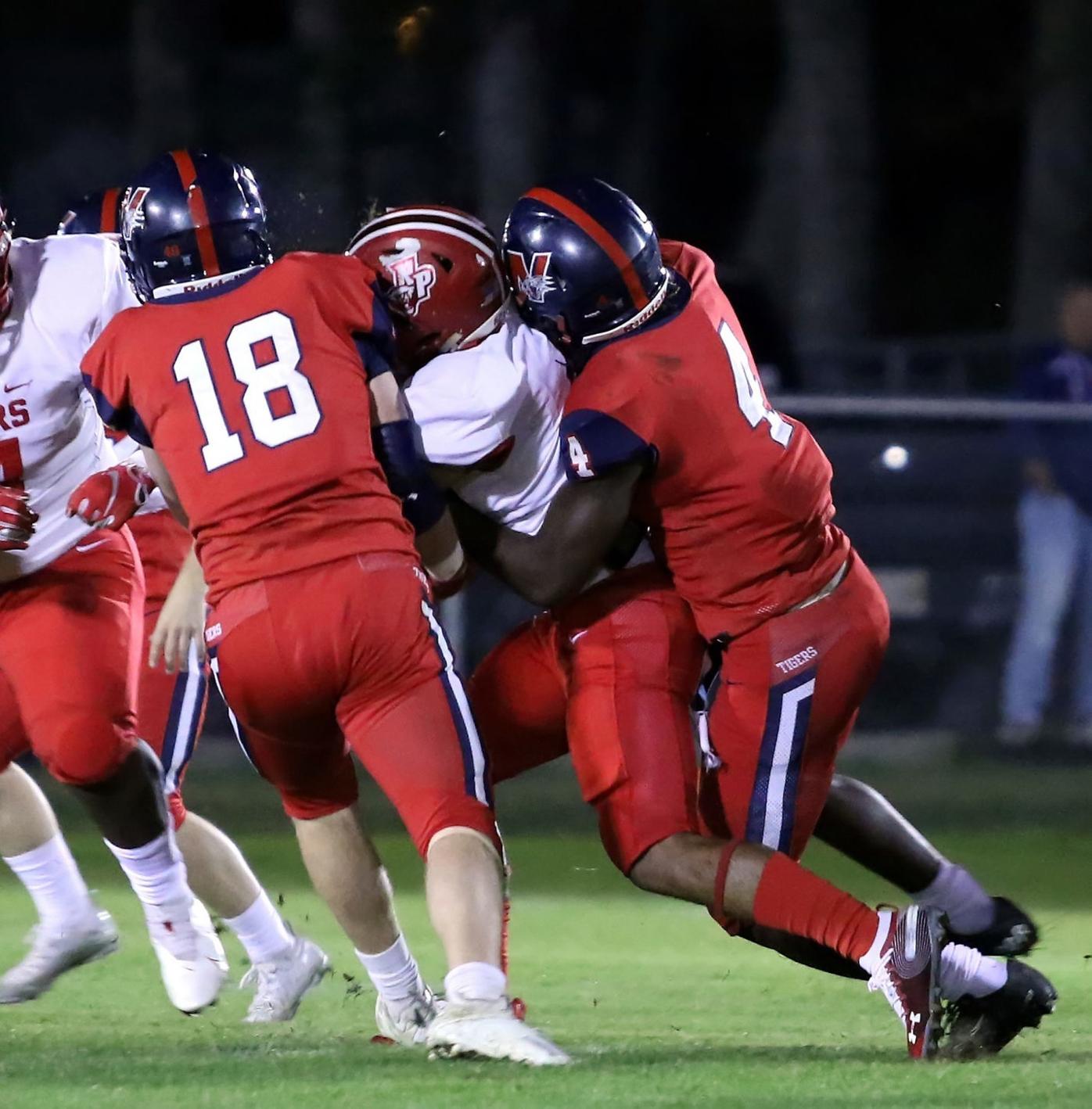 Nettleton’s Marcus Thomas and Evan Smith wrap up a North Panola runner early in the game. 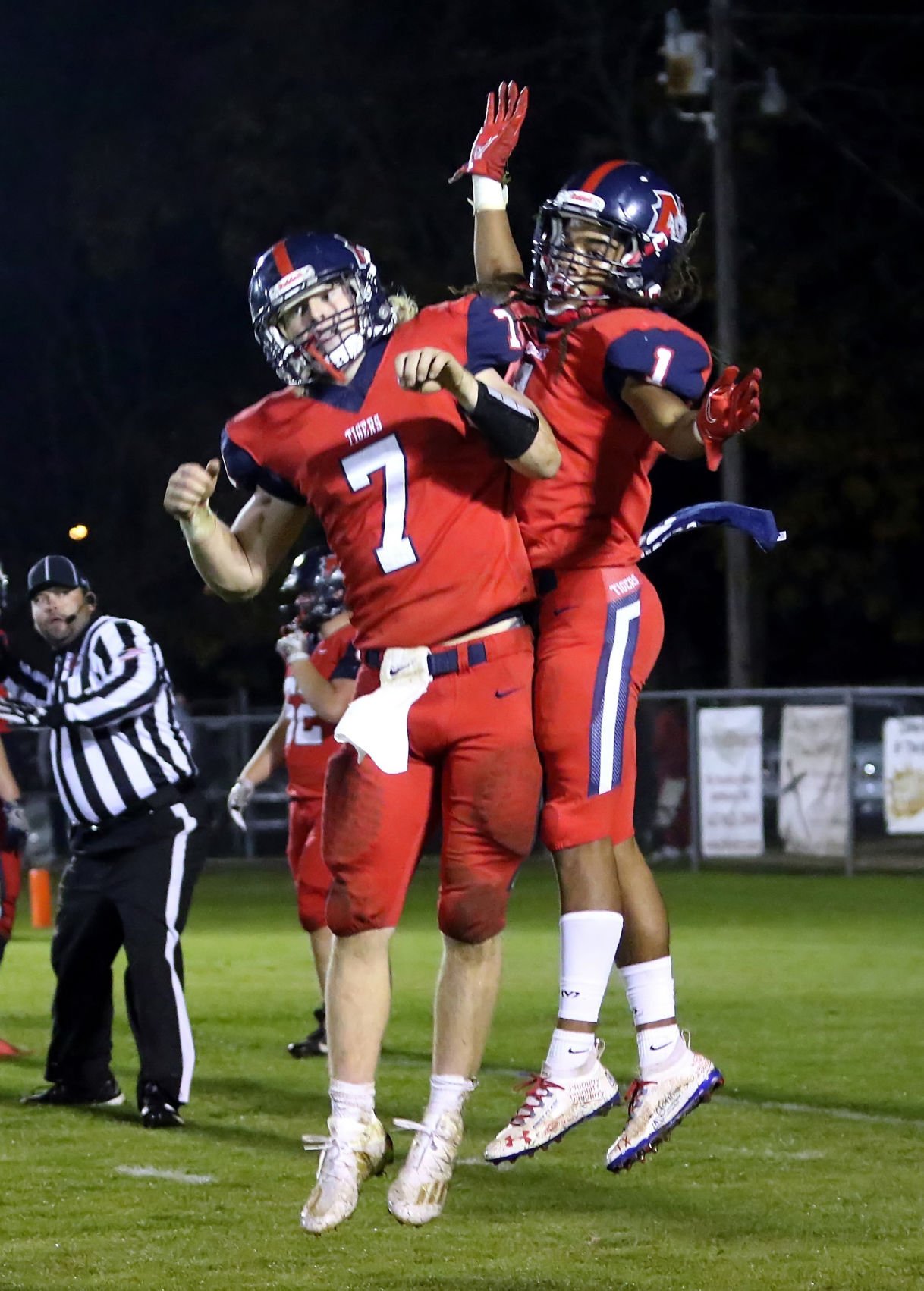 Nettleton’s Davis Oswalt and Anterion Venson combined for a pair of touchdowns against North Panola. 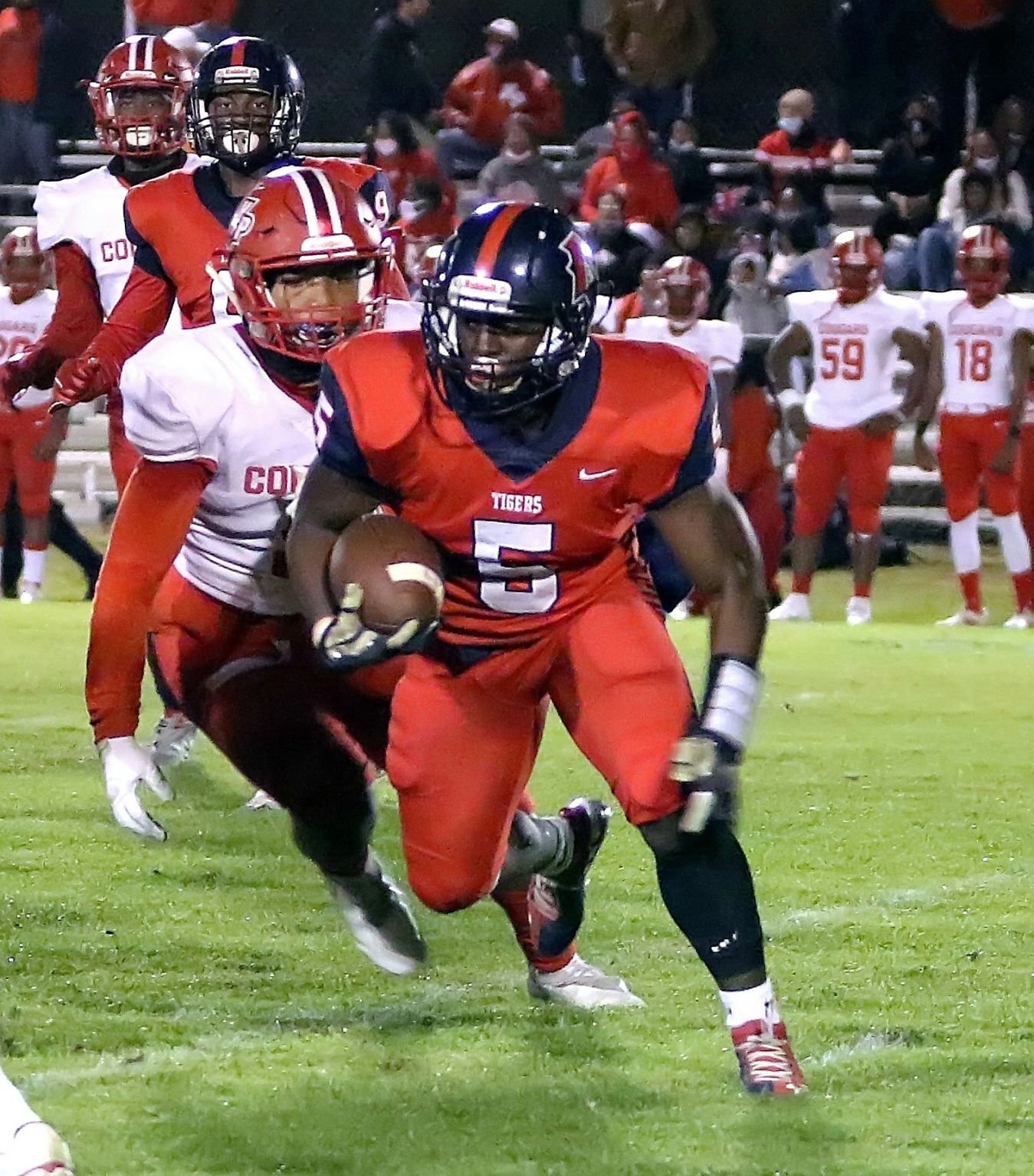 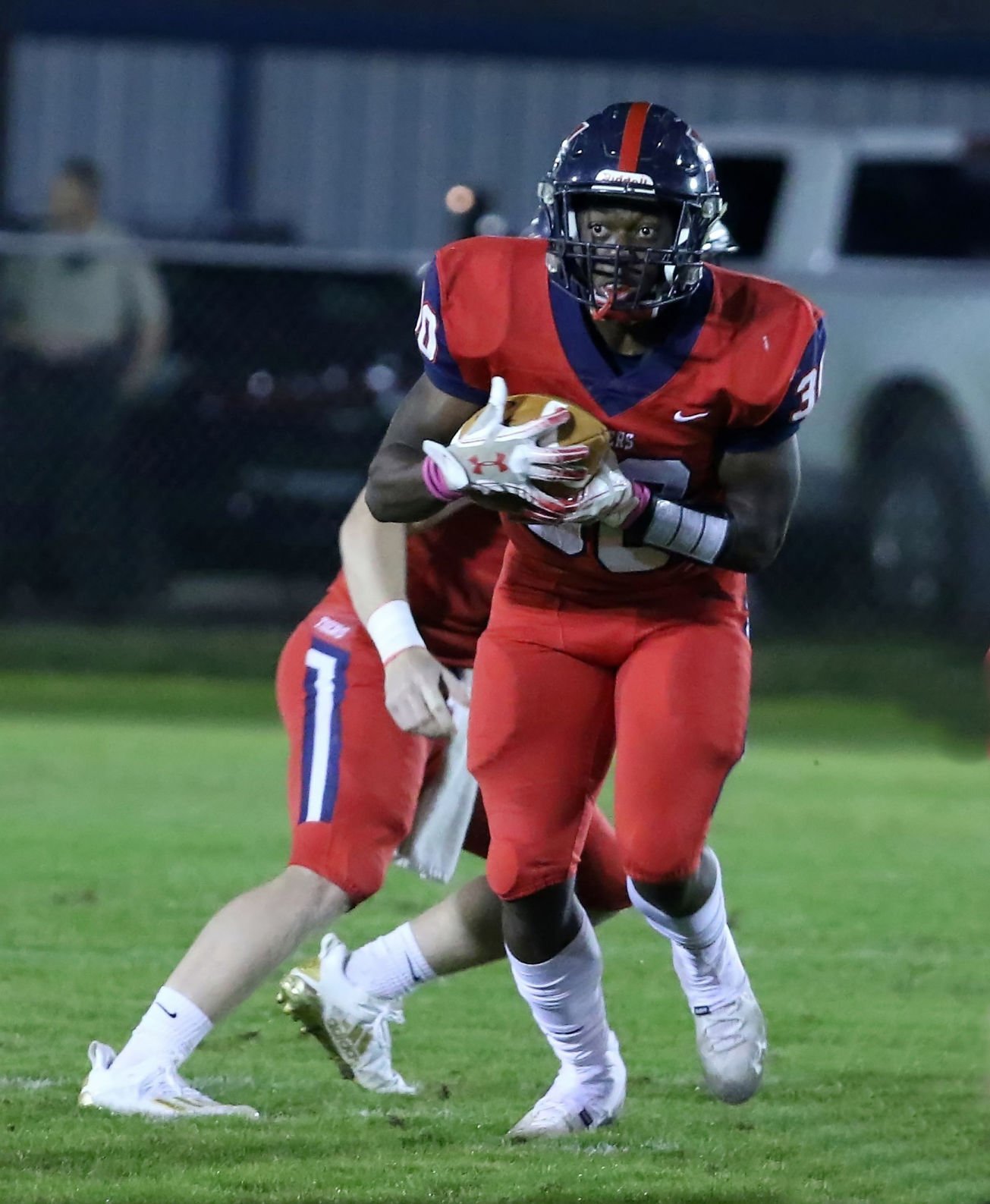 Nettleton running back Roderick Patterson takes the handoff from Davis Oswalt in the first quarter. 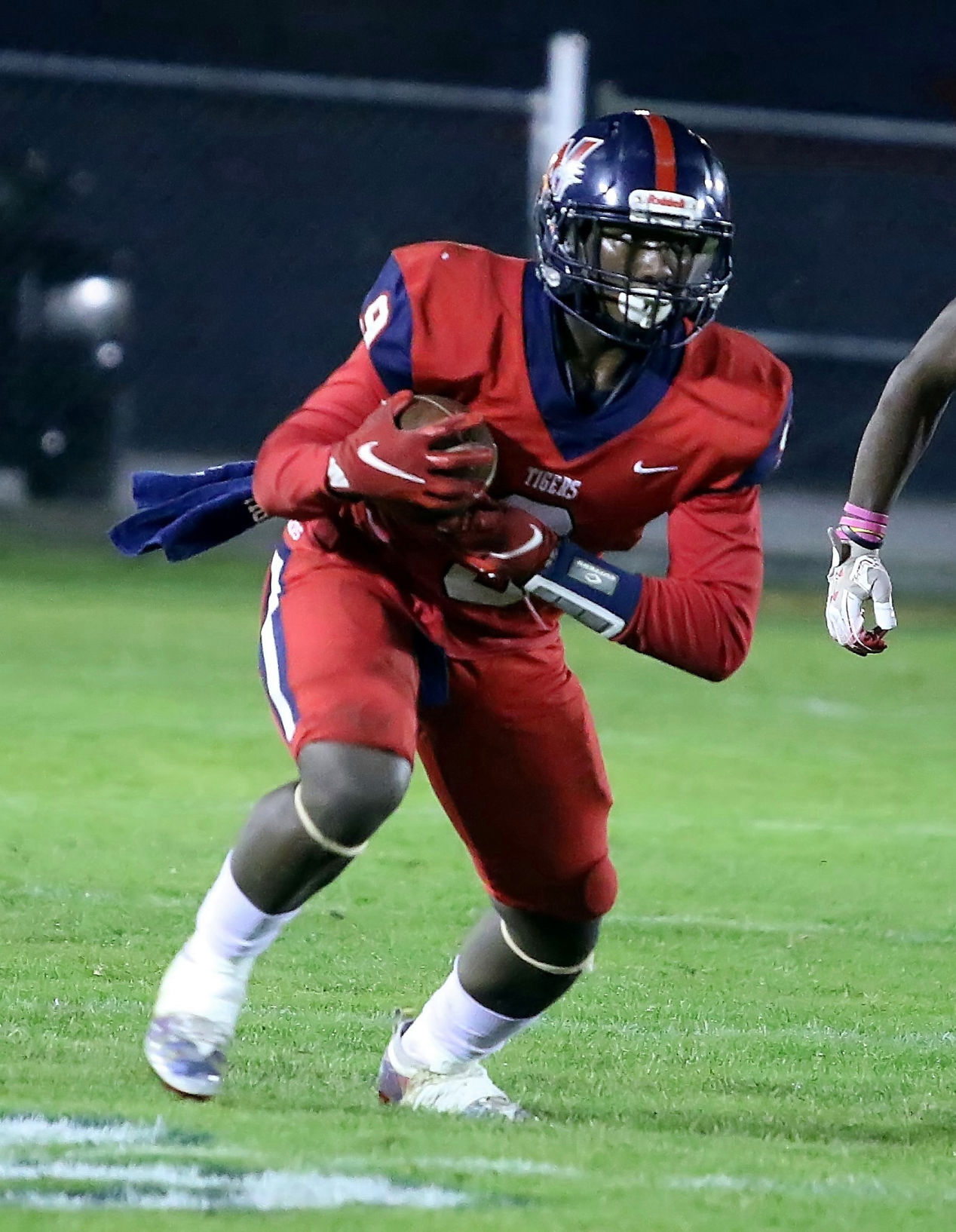 Nettleton’s Jay Hawkins comes up with the ball after a fumble recovery in the third quarter. 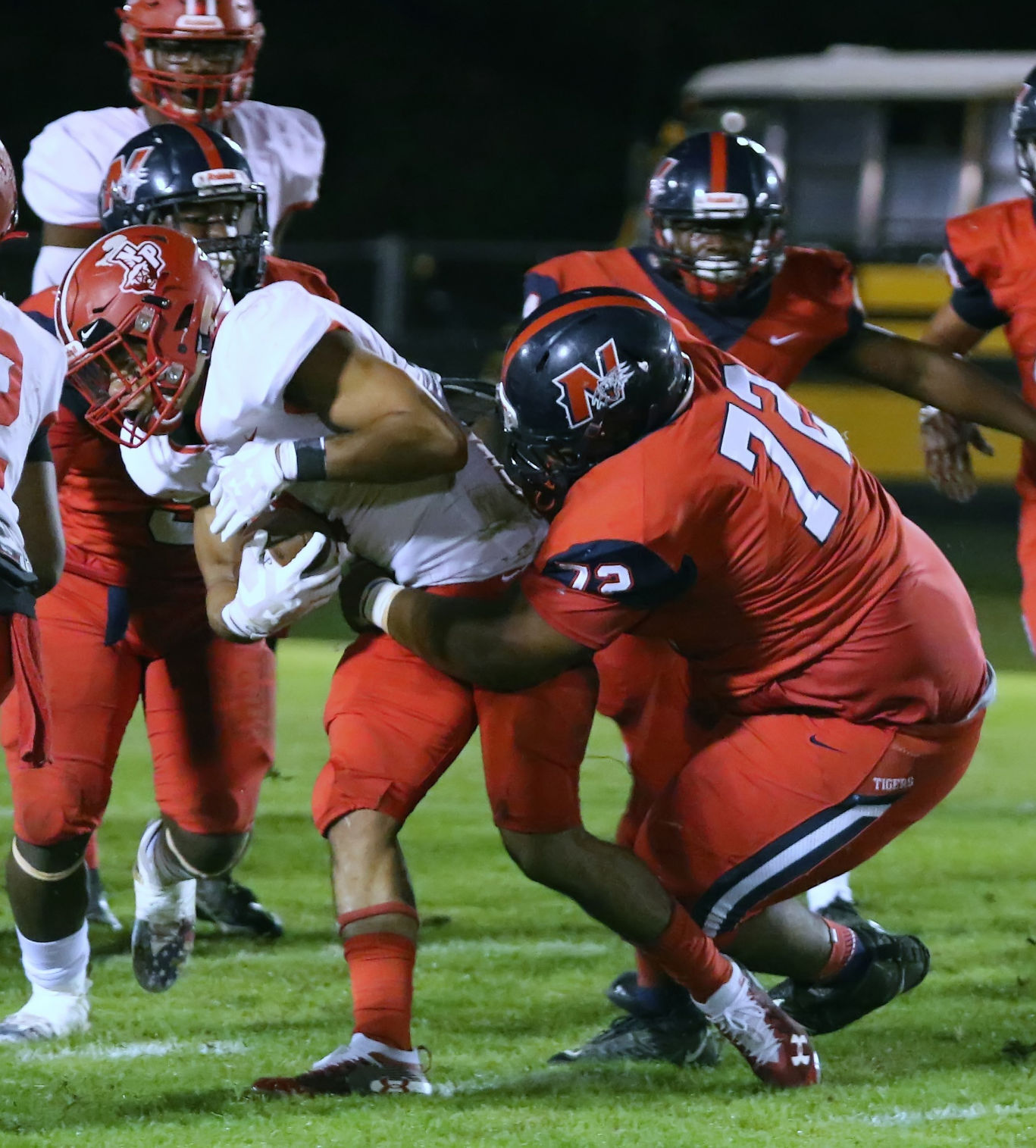 Nettleton’s Emmanuel Justice brings down a North Panola ball carrier from behind in the first quarter.

Nettleton’s Marcus Thomas and Evan Smith wrap up a North Panola runner early in the game.

Nettleton’s Davis Oswalt and Anterion Venson combined for a pair of touchdowns against North Panola.

Nettleton running back Roderick Patterson takes the handoff from Davis Oswalt in the first quarter.

Nettleton’s Jay Hawkins comes up with the ball after a fumble recovery in the third quarter.

Nettleton’s Emmanuel Justice brings down a North Panola ball carrier from behind in the first quarter.

NETTLETON – After being down 33-0 at halftime, the Nettleton Tigers came alive in the second half. It wasn’t enough, as turnovers and a late touchdown sealed their playoff fates and gave the North Panola Cougars a 41-21 win in the second round of the Class 3A playoffs.

“We talked at halftime that we could do one of two things,” Nettleton coach John Keith said. “We could lay down and let it get really embarrassing, or we could come out and play like we have all year. I’m proud of the way we responded and got back into it.”

The Cougars got the ball to start the game and gashed the Tigers early, scoring on their first three possessions to put the Tigers in an early 20-0 hole.

The defense finally started to click, with Jayden Hawkins and Marcus Thomas teaming up to force a fourth down. Emmanuel Justice got the tackle, but the Cougars did enough to move the chains. Evan Smith upended the running back and got the visitors off the field by forcing an incompletion on fourth down.

That momentum gave a bit of a spark to the offense, thanks to the running of Davis Oswalt and Roderick Patterson. That momentum soon go away, as Oswalt was bailed out by Drew Humble on a fumbled snap. A sack forced a punt, and the quarter ended with a Sadaris Conway tackle. Conway started the second quarter by forcing an incompletion and the first North Panola punt of the night.

Nettleton’s next possession went no where as after a short gain on a keeper, Oswalt was picked off.

A penalty put the Cougar offense behind the sticks, but the Tigers seemed to hold. Carter Crawley nearly came up with a pick to force fourth down, but the Tigers gave up another touchdown. Jake Lauderdale broke up the conversion attempt to keep it a 26-0 contest. The half ended like it began, with another touchdown given up to make it a 33-0 deficit.

Hawkins gave the Tigers a spark to begin the second half, getting a good kickoff return. Oswalt completed his first pass of the night, finding Anterion Venson for a short gain. Patterson kept it going by getting a first down on a run.

A penalty set the offense back, but Oswalt found Zavian Dilworth to make it third and four. Another missed snap killed the drive, however, and Smith came out to punt.

The Cougars’ offense was rolling again, but a fumble was recovered by Smith to give the Tigers a glimmer of hope.

An Oswalt scramble and Patterson catch set up a third and short, and a pass to Dilworth put the ball near midfield. That momentum seemed to fizzle out again, as another missed snap sent Smith out to punt again. The North Panola returner fumbled, and Jacorien Moore came up with the ball to put the Tigers in the red zone for the first time.

Patterson and Jamonte Guines chipped away on short gains, and Oswalt finished it, hitting Venson over the middle for a 15-yard touchdown. Jackson Cheek’s extra point made it a 33-7 game.

More good fortune came the Tigers’ way, as Cheek’s squib kick was recovered by the Tigers, but that didn’t last long as an interception ended that opportunity.

The Tigers got another break, however, as Hawkins recovered a fumble and set them up at the North Panola 36-yard line. Patterson’s 9-yard run ended the third quarter.

The fourth quarter began with a short pass to Venson, but the offense started to bog down. An Oswalt keeper made it a fourth and three at the 14, but the senior quarterback hit paydirt, finding Venson for his second touchdown of the evening. Cheek’s extra point was good, and the Tigers cut the deficit to 33-14.

The Tigers kept the door open, with Dilworth recovering an onside kick at the North Panola 44-yard line. Oswalt found Venson, who took it to the 9-yard line. Patterson found a few yards, but Oswalt ran it in for the touchdown. A hold wiped the points off the board, and the field goal was also missed.

On the next possession, Humble’s tackle and an incomplete pass forced a punt. Oswalt took a shot on first down, but the pass to Dilworth was picked off and sent the defense back out.

Thomas and Justice teamed up on a tackle, and Oswalt showed his defensive skills with a hit of his own, but the Cougars sealed the game with another touchdown. The conversion was successful to make it a 41-14 game.

Patterson fielded the kickoff on the bounce and set the offense up near midfield. The Tigers kept the ball on the ground, with Oswalt lowering the shoulder on third down to move the sticks. Patterson’s short gain was wiped out by a false start, but Oswalt scored on a keeper with 47 seconds left. Cheek’s extra point was good to make it a 41-21 game and round out the scoring.