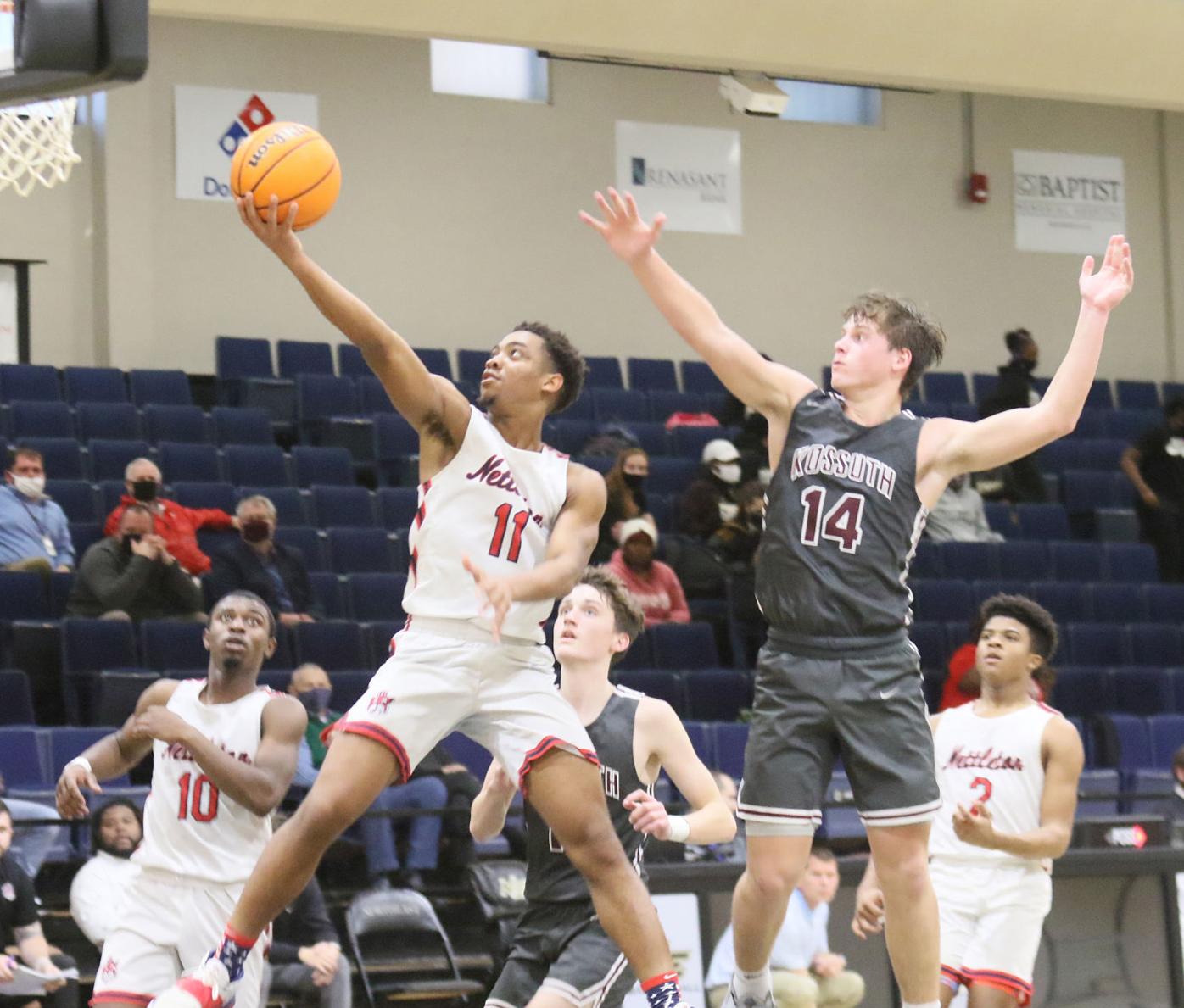 Nettleton’s Kenadre Johnson goes up for the layup ahead of Kossuth’s Keb Brawner last Tuesday afternoon. Johnson scored 14 against Kossuth and 10 against Booneville. 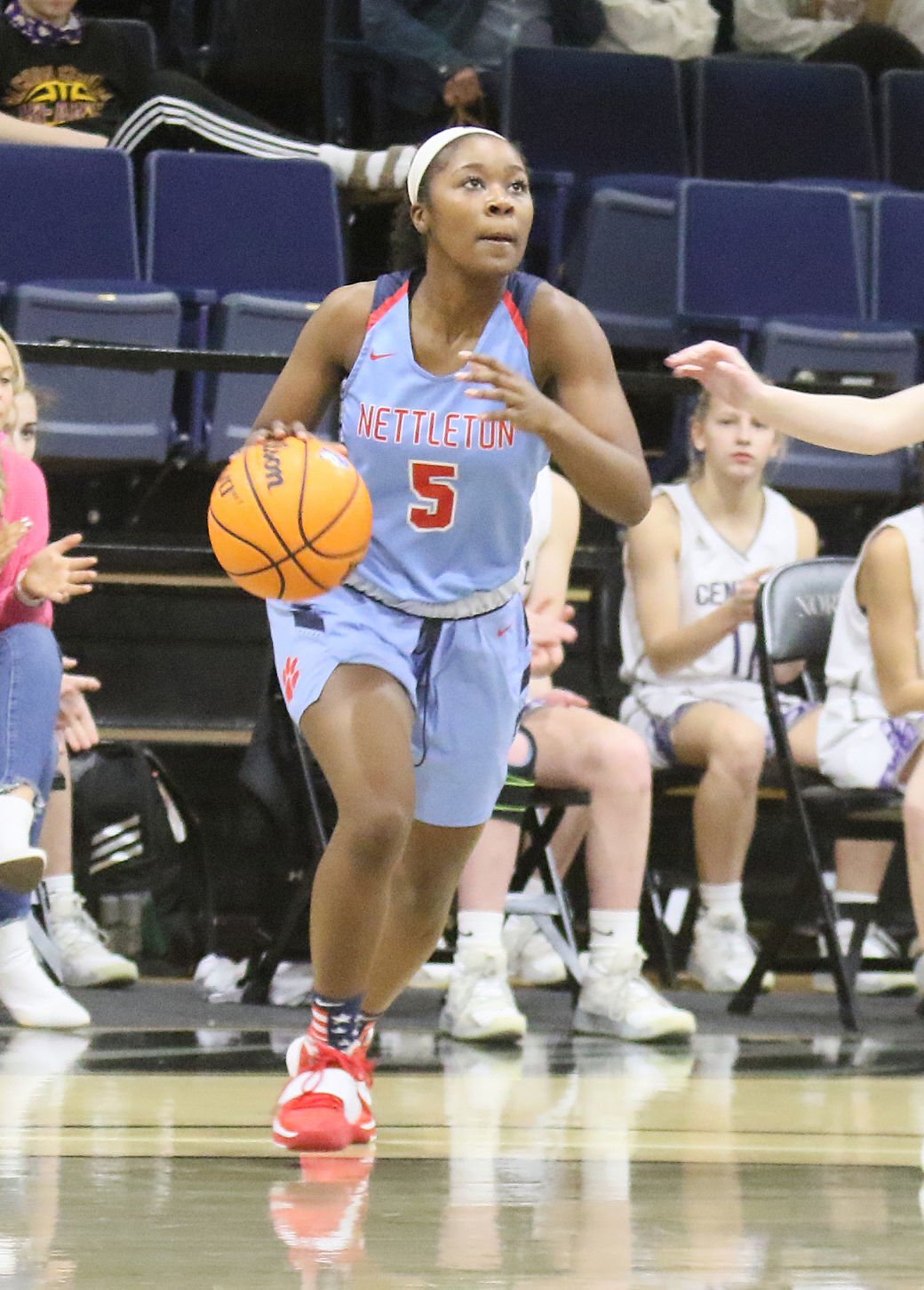 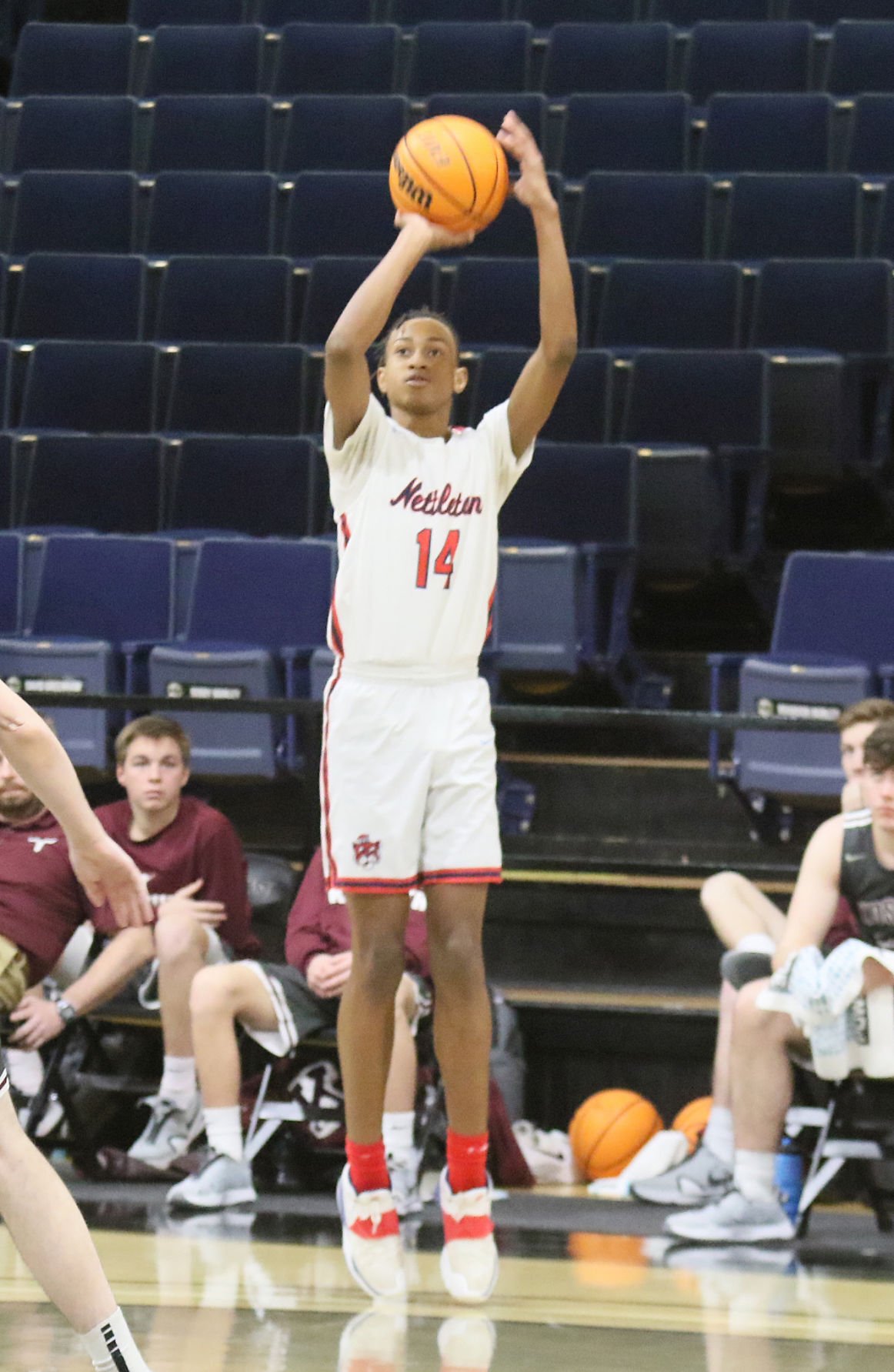 Nettleton’s Jamorion Ball poured in 26 points and made eight three-pointers against Kossuth in the first round win. 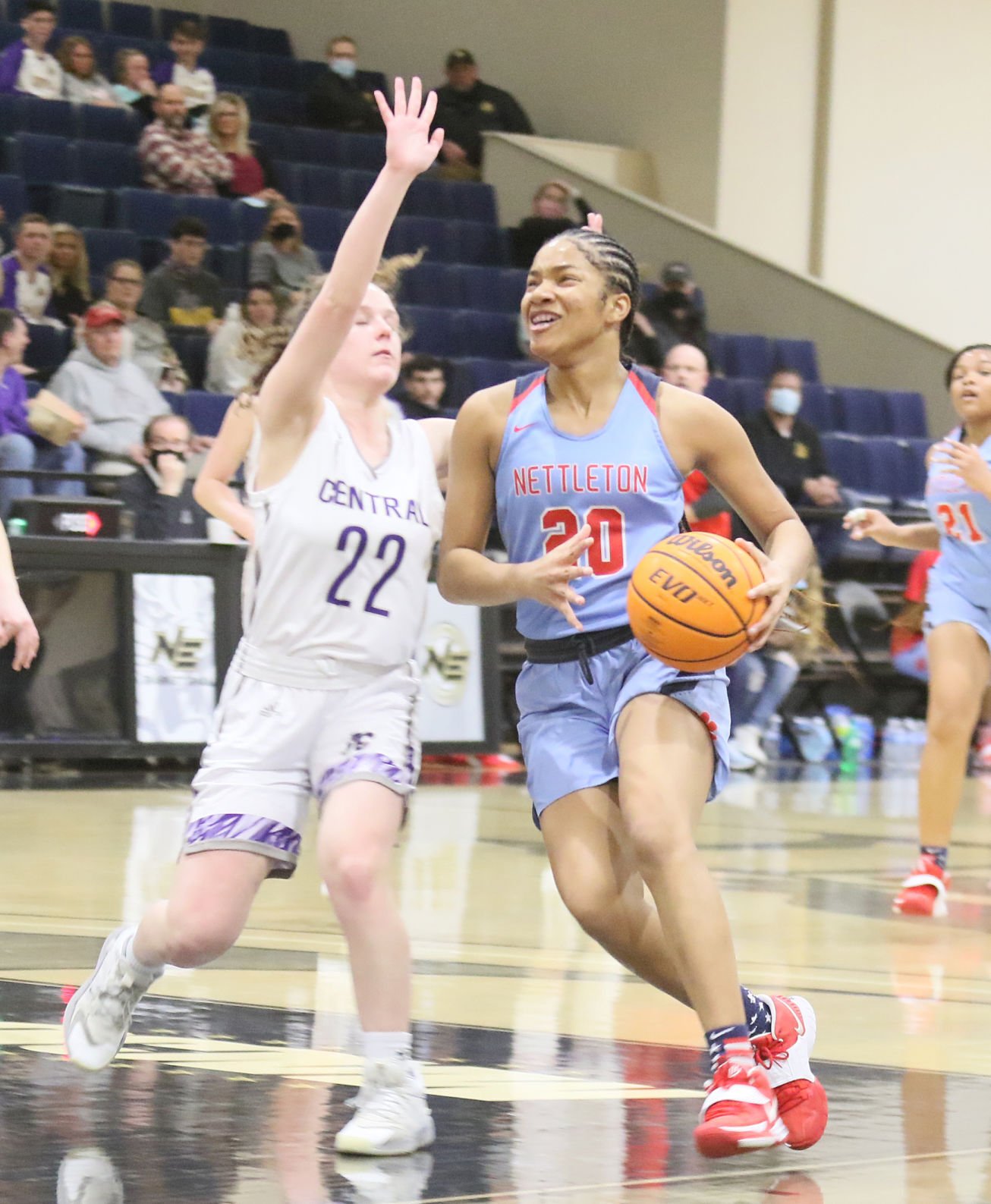 Nettleton's Madison Miller drives to the basket against Alcorn Central. Miller paced the Lady Tigers with 24 points before fouling out late in the loss. 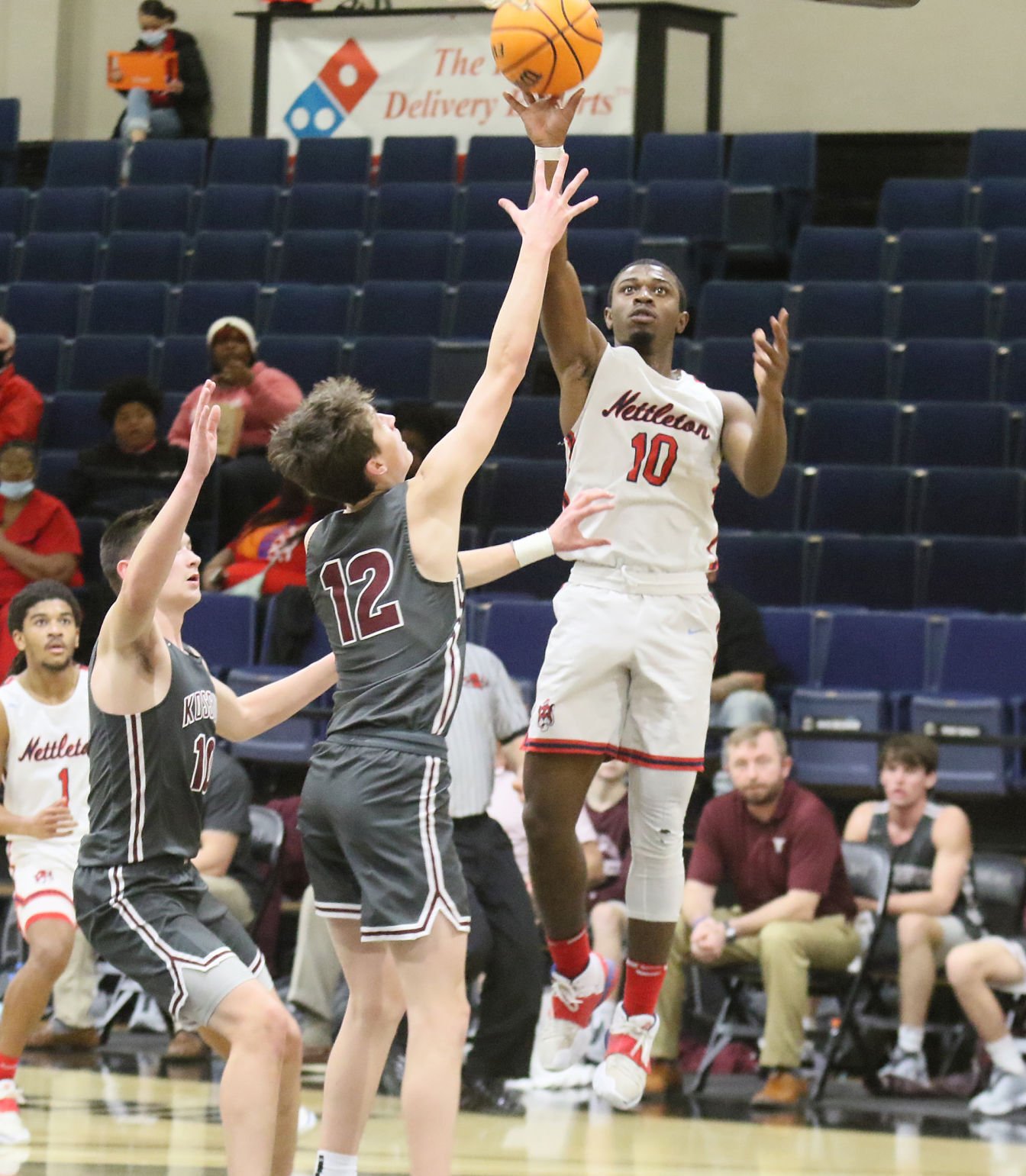 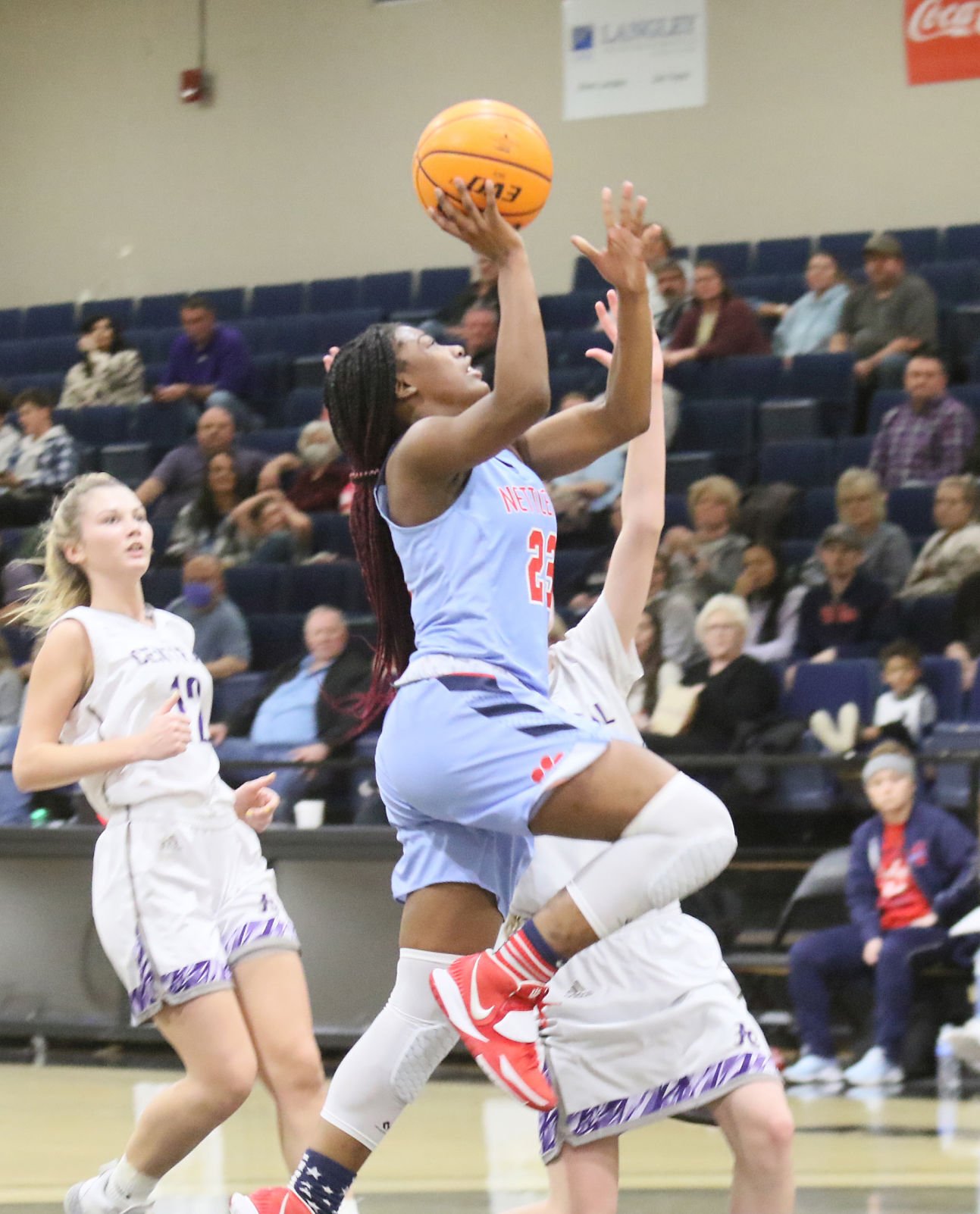 Nettleton's Tamiya Martin goes for a layup in the fourth quarter against Alcorn Central.

Nettleton’s Kenadre Johnson goes up for the layup ahead of Kossuth’s Keb Brawner last Tuesday afternoon. Johnson scored 14 against Kossuth and 10 against Booneville.

Nettleton’s Jamorion Ball poured in 26 points and made eight three-pointers against Kossuth in the first round win.

Nettleton's Madison Miller drives to the basket against Alcorn Central. Miller paced the Lady Tigers with 24 points before fouling out late in the loss.

Nettleton's Tamiya Martin goes for a layup in the fourth quarter against Alcorn Central.

BOONEVILLE – The Nettleton Tigers won their first two games of the Division 1-3A tournament against Kossuth and Amory to seal a first-round home playoff game and kept it close in the title game against Booneville before ultimately taking the loss.

(B) Booneville 47, Nettleton 38: The Tigers trailed by six in the first before Anterion Venson sank a three to close the quarter. He hit another three earlier in the quarter and had seven points in the period.

Nettleton kept it close in the second as well, trailing by just one at the half at 26-25. Zavian Dilworth and Jamorion Ball each had a pair of baskets in the second quarter.

The Blue Devils started to pull away in the third, outscoring the Tigers 12-6 to go up 38-31 as Trey McKinney started to find his groove. Keylin Ruff had four of Nettleton’s six points in the third.

The two teams kept things slow offensively in the fourth as Booneville stayed up for the nine-point win.

Keandre Johnson hit a three in the fourth and tied with Venson to lead Nettleton with 10 points each. McKinney’s 21 points for Booneville led all scorers.

(B) Nettleton 56, Amory 47: The Tigers upset No. 2 seed Amory from the regular division with the win in the semifinals on Wednesday night.

The Panthers led 15-13 at the end of the first with Drew Keeton hitting a pair of threes and Gray Thornton adding one as well. Jacorien Moore had a three for the Tigers and scored five in the quarter, while Anterion Venson had a pair of baskets.

Amory opened up a four-point lead at the half, 27-23, as Jamerison Martin, Thornton, Keeton, Amare Brown and Charleston Wallace all had scoring contributions. Zavian Dilworth hit his first three for Nettleton in the second, and Moore, Keylin Ruff and Jadyn Brand also kept it close.

The Tigers held Amory to just eight points in the third with a pair of baskets from Martin and free throws from Brown and Wallace and scored 14 of their own, including going a perfect 6 for 6 from the line with Dilworth, Jaylon Betts and Keandre Johnson. Nettleton led by two at 37-35 at the end of the third.

They kept the defense going in the fourth, despite Martin having 10 of his game-high 19 points in the final quarter. Malik White had Amory’s only two other points.

Venson and Moore had five each for Nettleton in the final quarter to help push the lead, while Dilworth and Johnson had key free throws and Brand added a pair of buckets.

Venson led Nettleton with 13 points, while Moore and Dilworth had 12 each.

(B) Nettleton 83, Kossuth 50: Nettleton trailed 7-4 early and then turned it on in the second quarter to start to come away with the easy win.

“We were a little flat to start the game, and you can blame the atmosphere on that,” Nettleton coach Grant Gardner said. “But we had a lot of energy in the second quarter. Once we started bringing that energy, our athleticism started breaking them apart. We had a lot of defensive intensity, and Kossuth may have gotten a little tired. We rotated fresh bodies in, kept up our intensity and made a run there.”

Anterion Venson hit a three to put the Tigers up by six to close the first, then they went on a 16-0 run to stretched it to 34-7 before Kossuth could answer. Jamorion Ball hit four threes in the run, while Zavian Dilworth and Jacorien Moore each had a pair of buckets.

The Aggies cut it to 39-20 late in the second, but Nettleton responded with a three from Venson and a layup from Moore.

Keandre Johnson scored the first four points of the third to stretch the lead out, and Ball had another pair of threes in the quarter. Moore’s steal and layup closed the third with a 64-36 Nettleton lead.

Ball, Jay Hawkins, Cam Ball and Winston Housley all scored in the fourth to ice the win.

Ball poured in 26 points, including eight made three-pointers, while Johnson and Moore had 14 each.

“It’s easy when you hit shots like that, but we can play with defensive intensity all the time,” Gardner said.

(G) Alcorn Central 70, Nettleton 59: The Lady Tigers battled foul trouble and an early deficit in the first round of the division tournament last Tuesday night.

Madison Miller hit a three, and Sydnie Harris followed her with a basket for an early lead, but Nettleton trailed 14-7 at the end of the first. Zion Seals and Miller got it to within three in the second before the Lady Bears pushed it out to double digits.

Miller had 13 points at the half but Nettleton trailed 36-19.

Miah Hall got back into the game after early foul trouble to give the Lady Tigers a spark in the third quarter. Central had another big run to go up 51-29 before Hall’s free throws closed the quarter.

Miller and Tamiya Martin started to close the gap in the fourth, getting it to as few as 12 before they, Hall and Sharman Mosely all fouled out.

Miller scored 24 points and Hall added 11 before each fouled out in the fourth quarter.

The concept of helping your fellow man will never die