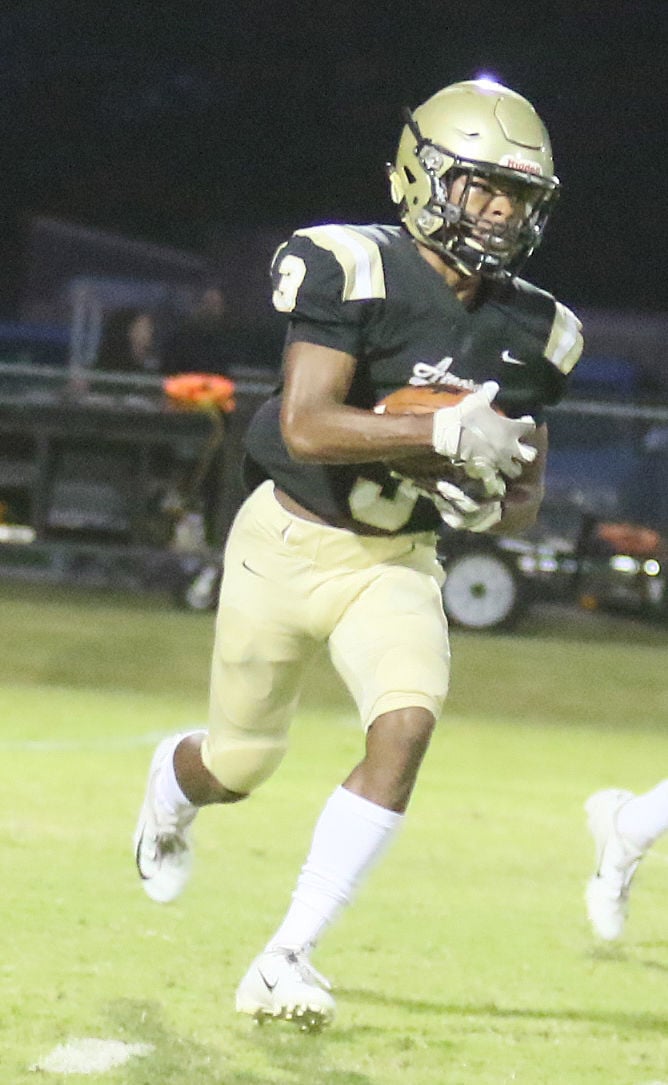 Amory’s Braxton Griffin led the Panthers in catches despite dealing with an injury the last few games of the 2019 season. 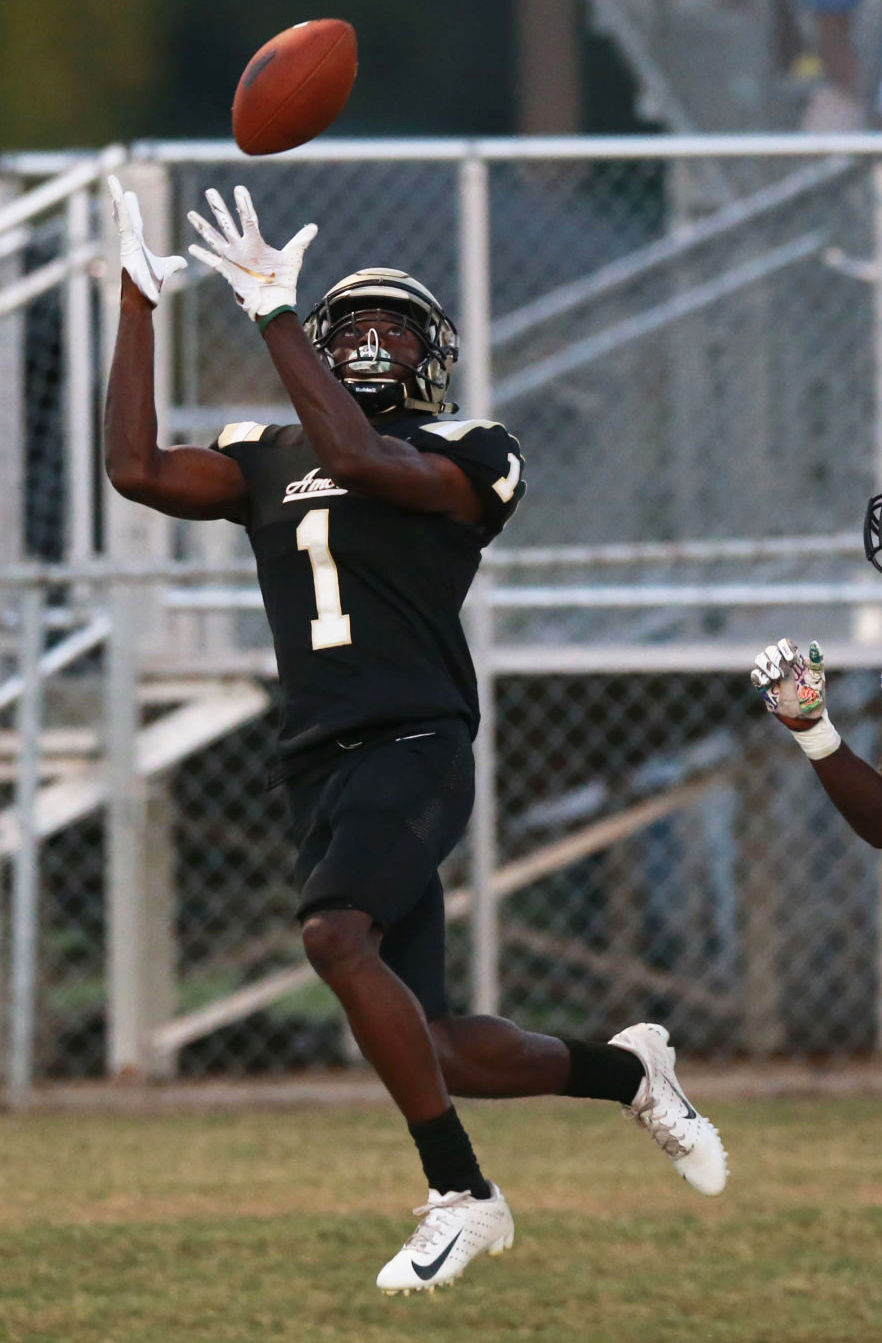 Amory's Jay Hampton led the Panthers in receiving yards with 930 and touchdowns with as a junior. 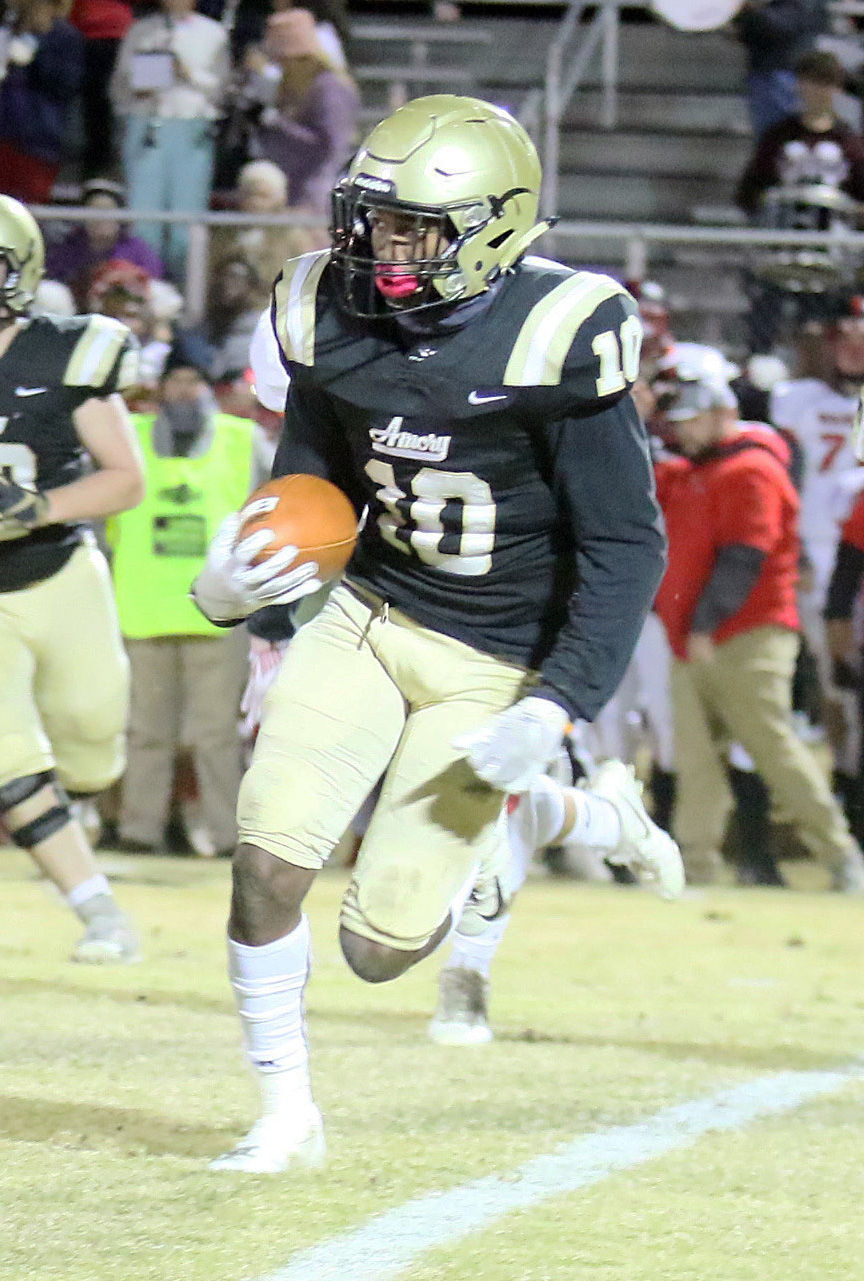 Amory’s James Spratt has totaled more than 1,000 receiving yards in his career and multiple interceptions the last two seasons.

Amory’s Braxton Griffin led the Panthers in catches despite dealing with an injury the last few games of the 2019 season.

Amory's Jay Hampton led the Panthers in receiving yards with 930 and touchdowns with as a junior.

Amory’s James Spratt has totaled more than 1,000 receiving yards in his career and multiple interceptions the last two seasons.

They, along with senior quarterback Hunter Jones, grew up playing and developing a love for the game together and are seeing that chemistry pay off in the Panthers’ explosive offense over the last few seasons.

“We were playing some pee-wee football together, and we have always known each other real well,” Griffin said. “In high school football, we have been learning that real well and we put it all together.”

The Panthers’ trio of playmakers at receiver have been making noise since their freshman seasons but really put it all together last season, combining for nearly 2,000 yards and all 20 of the team’s receiving touchdowns.

Amory coach Allen Glenn said Griffin, Hampton and Spratt each brought something different to the table.

“Jay is a downfield guy. He’s going to stretch the field vertically, and he’s a super fast guy, big body, long kid. The home run ball with him is big. With Braxton, he plays in the slot, and he’s more of a shifty guy,” Glenn said. “He’s fast as well, but really good side to side. We are going to try to get him the ball on the perimeter and get it in his hands quick and let him work. James is kind of a mix of both with the big play and playing in the slot as well. The biggest thing with James, in my opinion, is that one guy doesn’t tackle him, and it’s not that he’s a big juke, shifty guy. It’s more so people just bounce off him. They are all three different, but they are all three very vital in what we do.”

Each found success in 2019 at different times and while each was going through their own challenges.

Hampton was the breakout player of the group, hauling in nearly 1,000 yards receiving with 930 and also a team-high 11 touchdowns.

“The light switch kind of came on for Jay, and he was playing with some confidence. That was the biggest thing with him,” Glenn said. “James and Braxton both have kind of been in the mix since their sophomore and freshman years. They have just played some more meaningful football than Jay had before last season. It was kind of a come on the scene year for Jay this past year.”

Spratt had a late start to the season as he missed the first three games due to injury, and Griffin found himself in the same situation on the back end, battling a groin injury for the last few games.

“I just need to stay healthy this season,” Griffin said. “If everybody can stay healthy, then I think we will be good.”

Glenn said being without any of the three hampered their offense and that they missed Griffin in some key games late in the season.

“It was unfortunate for Braxton. He was having an awesome year and just had a groin pull,” Glenn said. “It kind of lingered on and lingered on, and about the last three weeks, he was just very limited on what he could do. It was unfortunate for him and for us as well because I felt like with him, our team is completely different from when we don’t have him.”

All three are hoping to play at the next level with Hampton holding nine offers.

On the Division I side, he has offers from Indiana, Central Arkansas, Austin Peay, Murray State and Samford and has talked to Mississippi State, Ole Miss and Southern Miss.

“It’s slowed up a little bit right now, but I have still talked to a whole bunch of coaches,” Hampton said.

Spratt has offers from Central Arkansas and Austin Peay and has also talked to Mississippi State about a potential visit in the future.

“I just have to prove, being my size, some people don’t get opportunities to play at a high level. I have a chance to prove that size doesn’t matter,” Spratt said. “It’s just like Braxton. People keep telling him that he’s too small, but that doesn’t matter. He’s a better player than most players we have played against.”

Griffin is still waiting on his first offer but is busy putting his game film out there and hopes a strong 2020 season will help more of them come his way.

“I haven’t talked to a coach one-on-one, but I hope I can get a couple of offers by the time it’s time to commit to somewhere,” Griffin said. “I’m going to try to get enough yards and enough film to where I can.”

While the shutdown ended their chances of having a spring football game, all three have stayed busy and in shape even before workouts for the team officially started on June 1.

For Griffin, the shutdown also ended his junior season of baseball just when the team was showing its potential.

“When baseball ended, I started working out for football early,” Griffin said. “I have been working out every day, and hopefully that will pay off during the season.”

Spratt works out before the team’s practice each day and occasionally afterwards as well.

“I run every day before I come here. I get up at like 5 in the morning and run, do a little footwork and then come out here to practice,” he said. “Then sometimes if I’m not still so tired, I go back home and do some more footwork and things like that.”

The Panthers were put out in the first round of the Class 3A playoffs in a shocker to Independence, but they are putting that loss behind them and looking ahead now.

“I think we had a pretty good year last year, but I think this year will be better,” Hampton said. “We have a good chance, and we know what we have to do to make a run in the playoffs.”

One of the challenges during the summer and that Amory missed out on working through in the spring was putting in a whole new offensive line.

“I think we have to prove this year that we can still make plays, even though with our offensive line, we have a new set of guys coming up,” Griffin said. “We can trust them to make plays, and then they can trust us to do the same on the back end of that.”

Spratt said he feels like his whole senior class has something to prove.

“We have to play our best every game and play every game like it’s our last one and just hope for the best and that we can come out on top,” he said. “Our expectations are high, especially because we’re seniors now. I feel like if we play the game the way we’re supposed to play it, we can do well.”