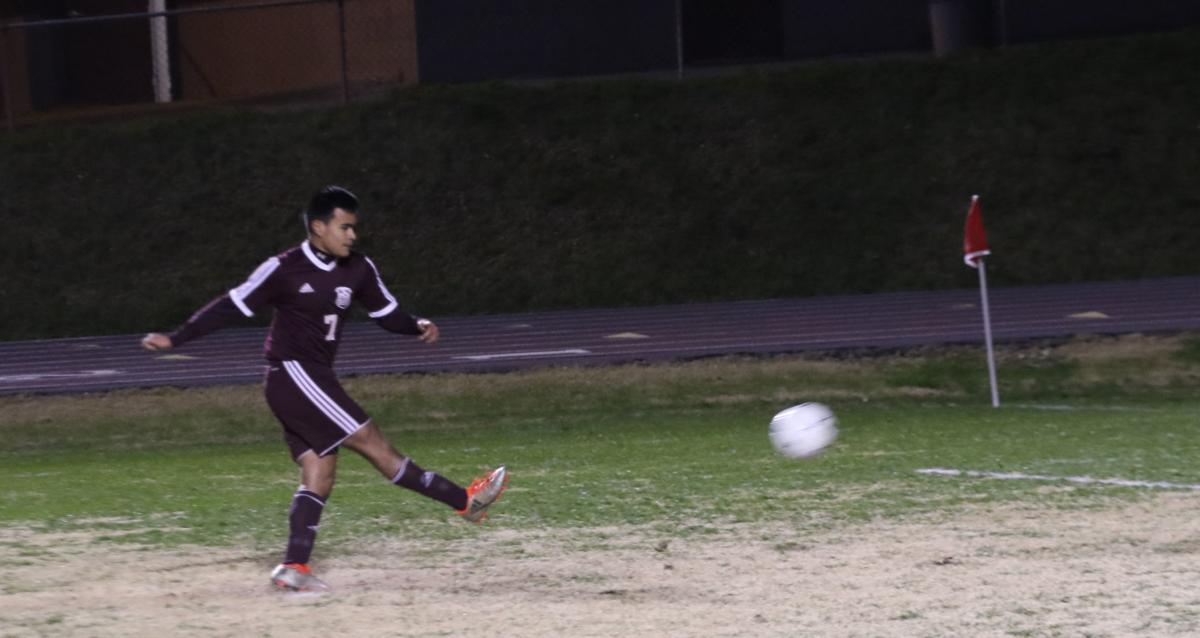 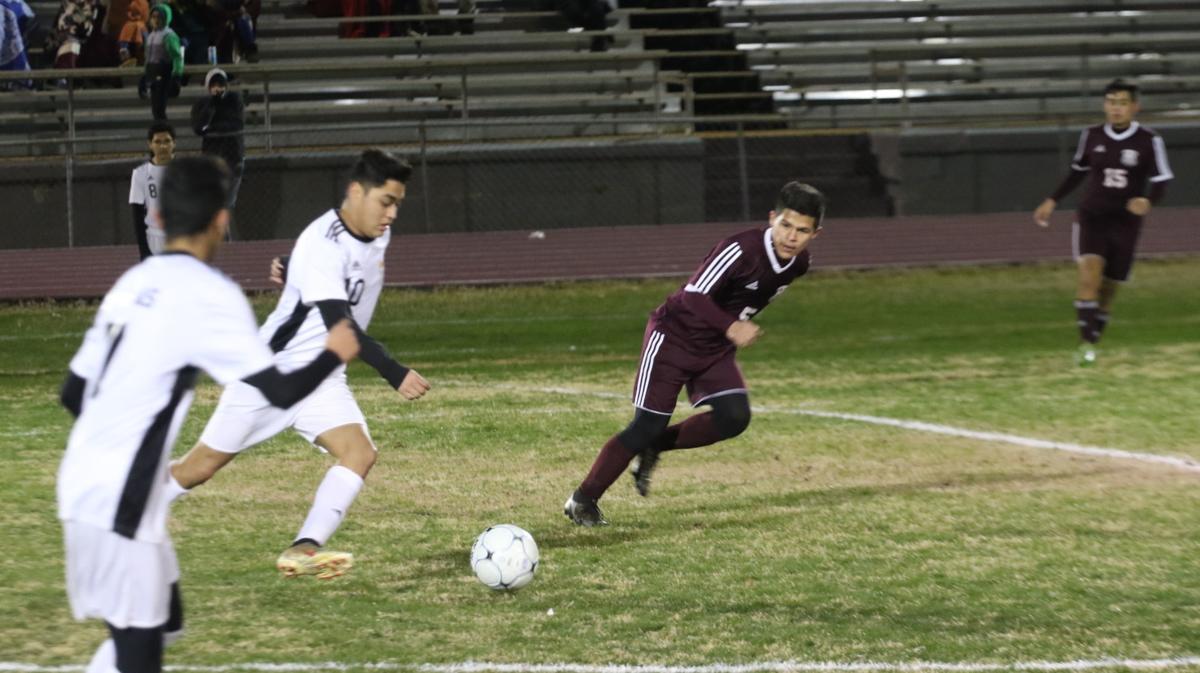 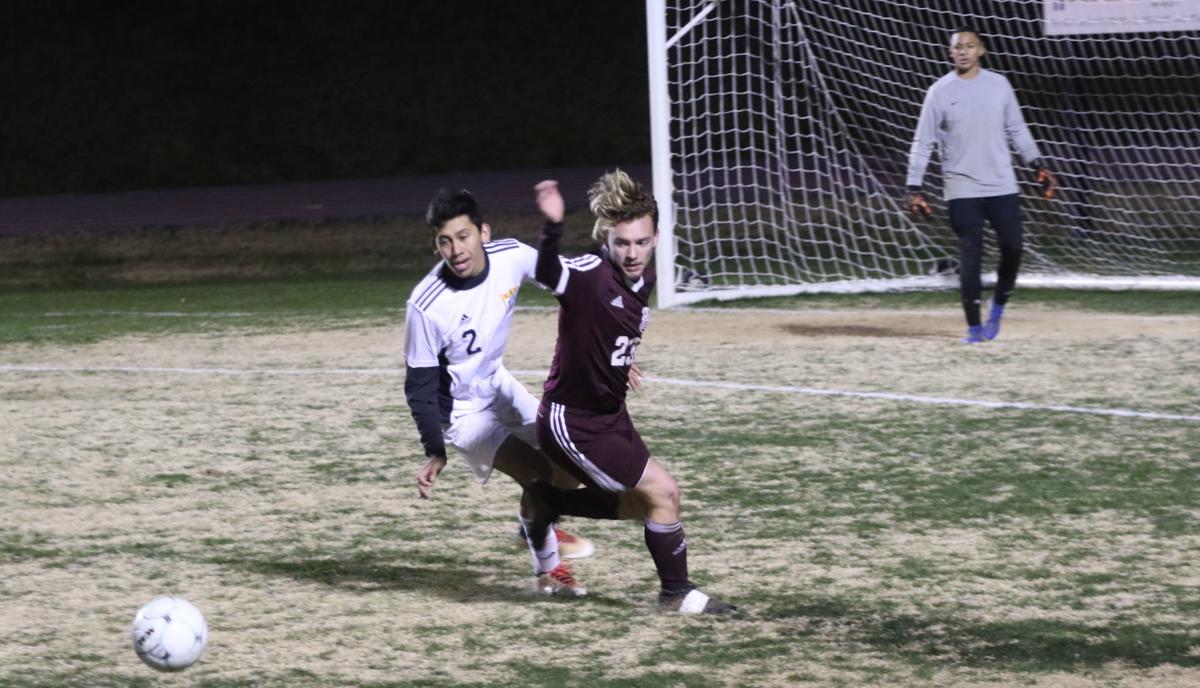 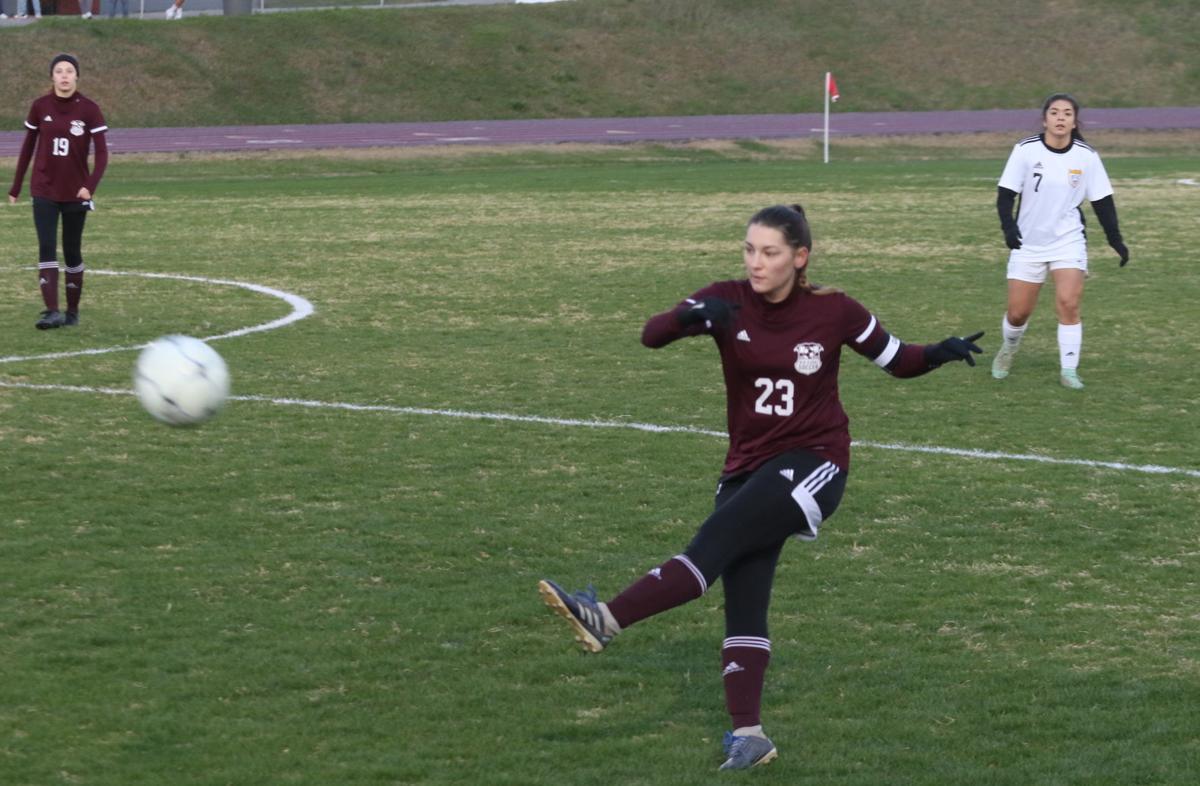 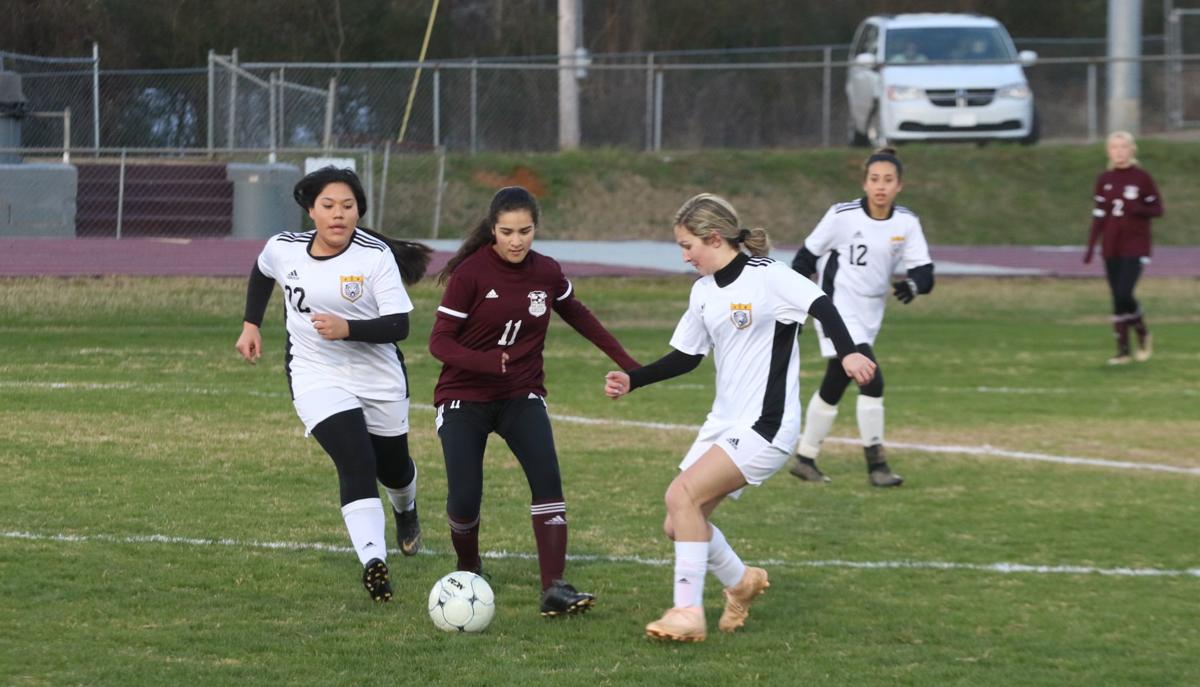 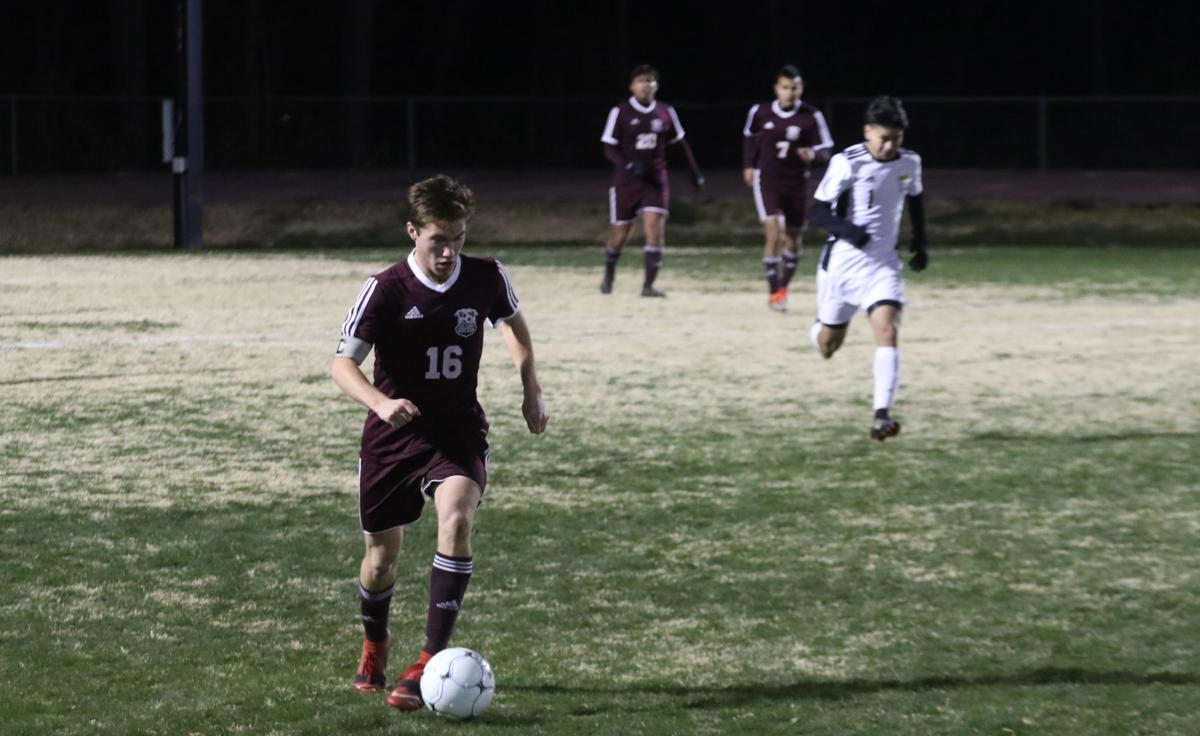 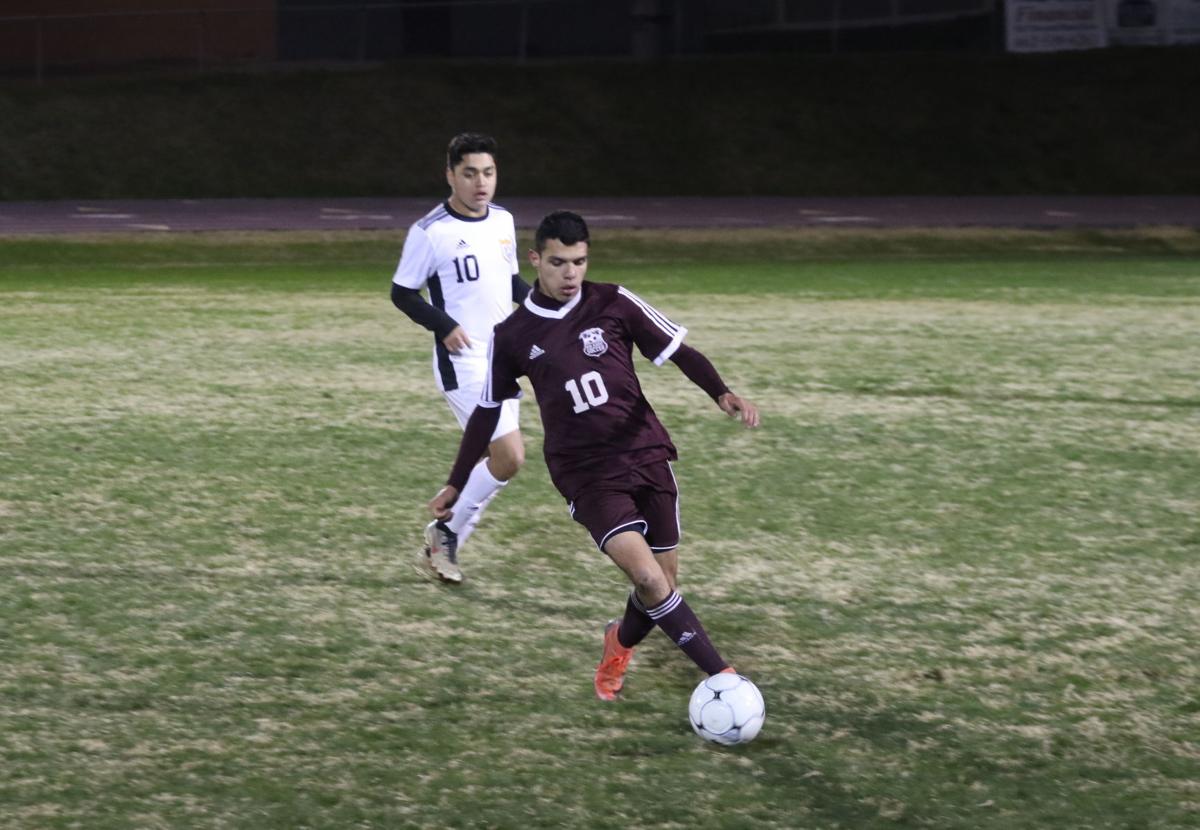 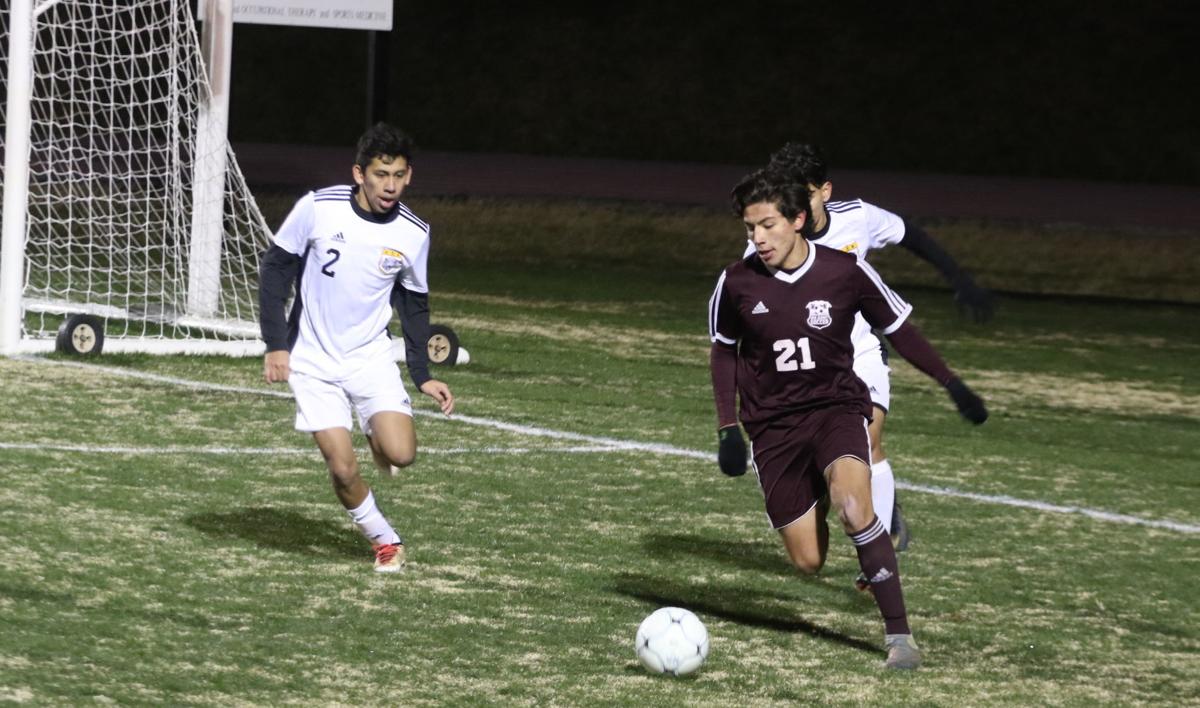 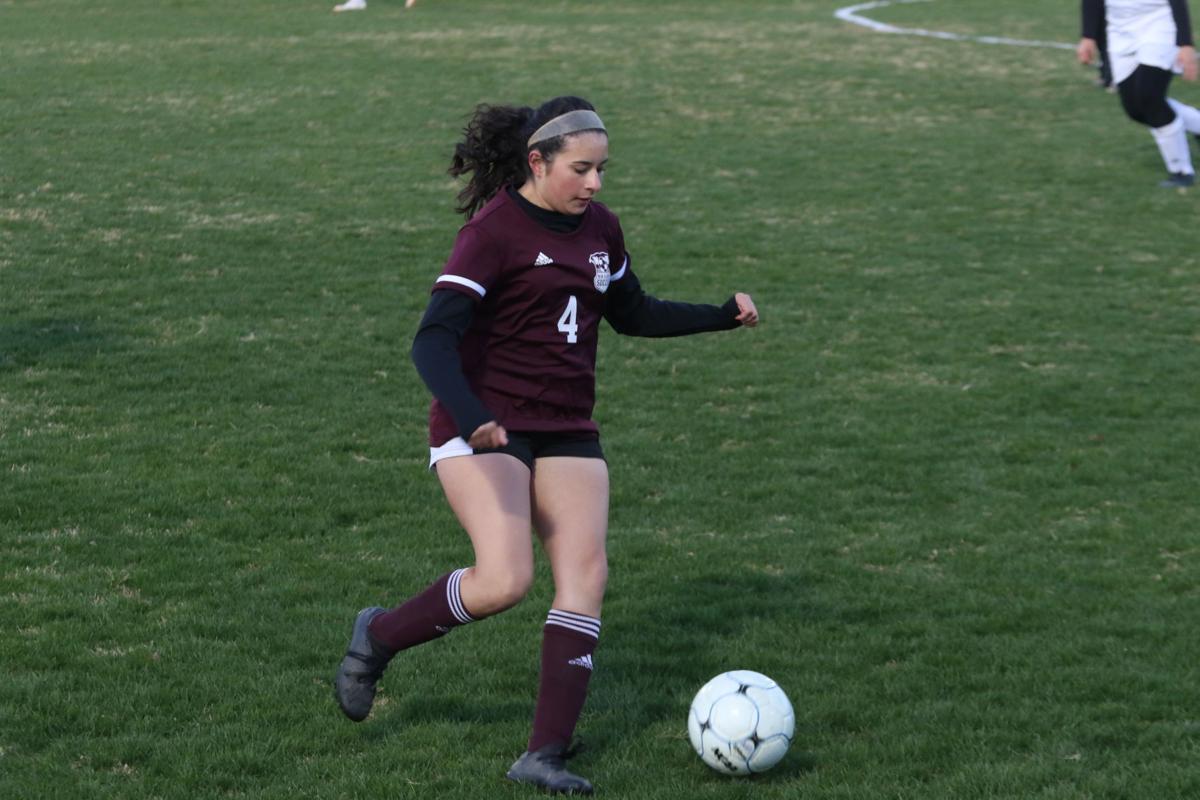 Max Spencer works the ball into space with Ripley's Rene Bernadino marking him.

Sammie Jo Doyle settles the ball inside the 18 as teammate Maggie Jo Everett watches. Doyle had the hat trick for the Lady Bulldogs with three goals.

By Dennis Clayton Sports Editor
1 of 9

New Albany - The breaks seemingly went against the New Albany Bulldogs on Tuesday in their Division 1-4A soccer match with Ripley as the Tigers scored inside the final two minutes to grab the 3-2 win. Ripley takes sole possession of first with the win while New Albany dropped into second place.

"I think Ripley's got a really good team, we knew coming out tonight that it was going to be a really close contest," New Albany coach Caryl Vogel said. "The first result was a 5-1 us and we had a really good night then and we needed to have that same kind of night tonight to win.

"I thought we played well enough to win the game, just unlucky and that's the way soccer works sometimes. You create more chances, create better chances and sometimes you don't win the game. That's one of the great things about soccer, it's a life lesson for these kids. When you put forth your maximum effort and things don't go your way, that's going to happen in life and lucky for us, we still have something to play for."

Three plays that occurred during the match had a significant impact on the outcome of the match.

The first play that went amiss for the Bulldogs was an unsuccessful penalty kick that they could not convert after a Ripley foul inside the box around the 60th minute.

A second missed opportunity came immediately after the PK as the Ripley keeper deflected the shot toward the left, but it went back into the field of play and New Albany pounced on the shot on goal. However, the shot struck the right post and bounced away from the frame. A goal in either situation would have tied the match at 2-2.

The third and final play that had significance came in the 78 minute as Ripley's Juan Luna played a ball into the net at the mouth of the goal following a bobble by New Albany's defense for the game-winner when it appeared the match would be headed to overtime.

New Albany struck first on the night as Parker Clayton gave the Bulldogs a 1-0 lead in the 12th minute.

Ripley sent the game into the half tied at 1-1 as Jorge Ruedas found net in the 35th minute on a shot inside the far post.

The Tigers wasted little time breaking the deadlock as Adrian Ruedas scored from up top from about 15 yards away in the 43rd minute and Ripley held a 2-1 advantage.

New Albany evened the score at 2-2 in the 71st minute as Dani Avila converted a penalty kick following a foul inside the box by the Tigers.

The loss dropped the Bulldogs to 13-5 overall and 5-2 in division. New Albany is assured of making the playoffs in 4A, but will have to go on the road to face Division 2-4A champion Pontotoc as the second place team.

"Yes, that was a division title that was one of our goals this year that we are not going to be able to achieve, but there are still goals that are left in front of us," Vogel said.

New Albany took the mercy rule win over Ripley in the opener as they were led by Sammie Jo Doyle's hat trick in their 7-0 win.

Annalyn Hogue got the scoring started for the Lady Bulldogs in the 28th minute on her goal off an assist from Katherine Gonzalez for the 1-0 lead.

New Albany scored their second goal with seconds left in the first half as Doyle converted off a corner from Maggie Jo Everett and the teams went to the half with New Albany up 2-0.

Gonzalez scored a quick goal a minute into the second half and gave the Lady Bulldogs a 3-0 lead.

Kaitlin Horne came through with a goal for New Albany in the 60th minute off a Doyle assist to build the lead to 4-0.

Doyle added two more goals in the 64th and 75th minutes while Hogue found net with a second goal at the 68 minute mark.

The Lady Bulldogs improved to 5-2 in division with sole possession of second place. A win over North Pontotoc will put New Albany into the 4A playoffs which begin next week.