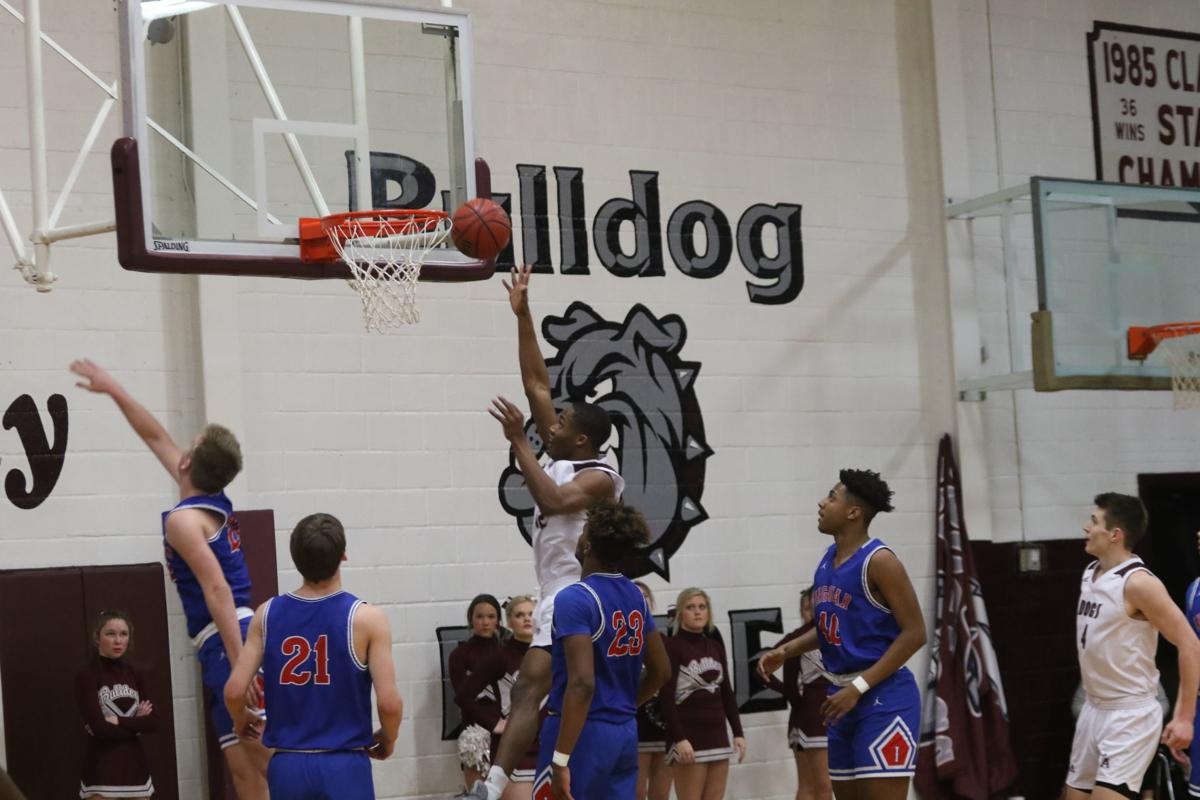 Michael Casey of New Albany drives in hard for the layup attempt against Ingomar. 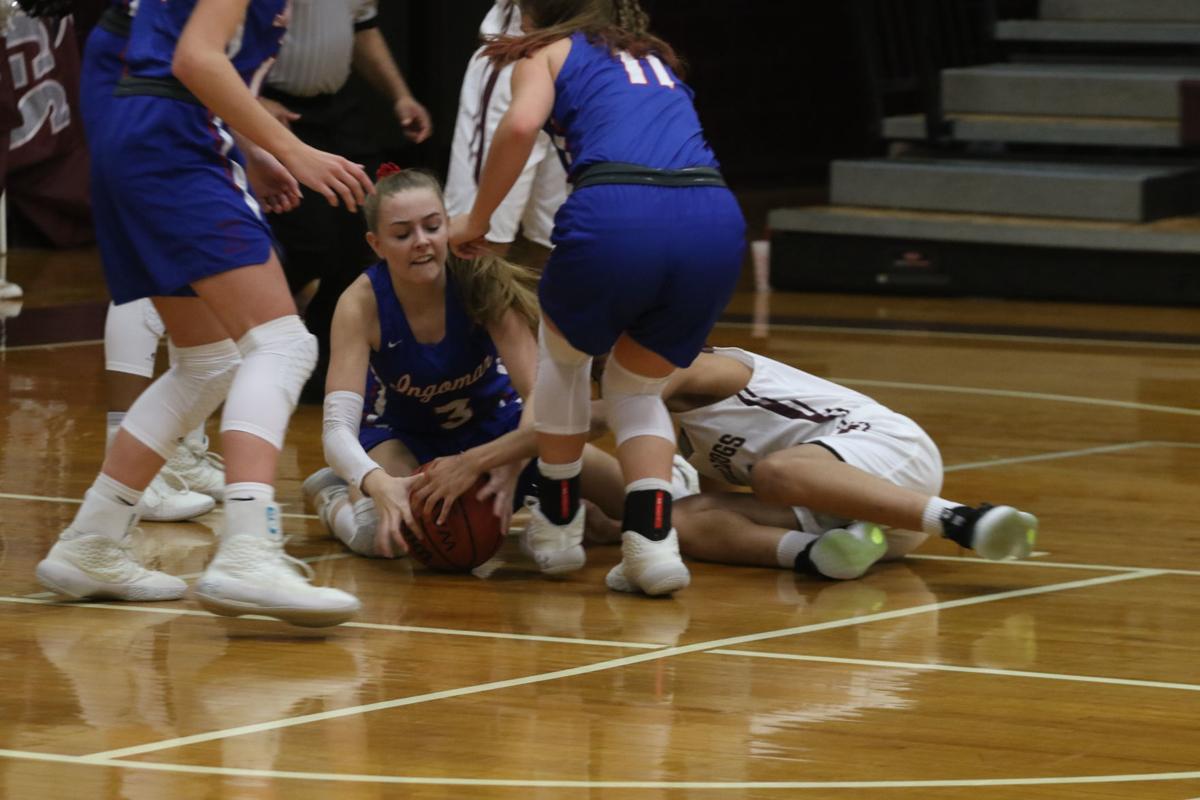 Lexi Campbell (3) of Ingomar wins the scramble for the loose ball with Madison McDonald. 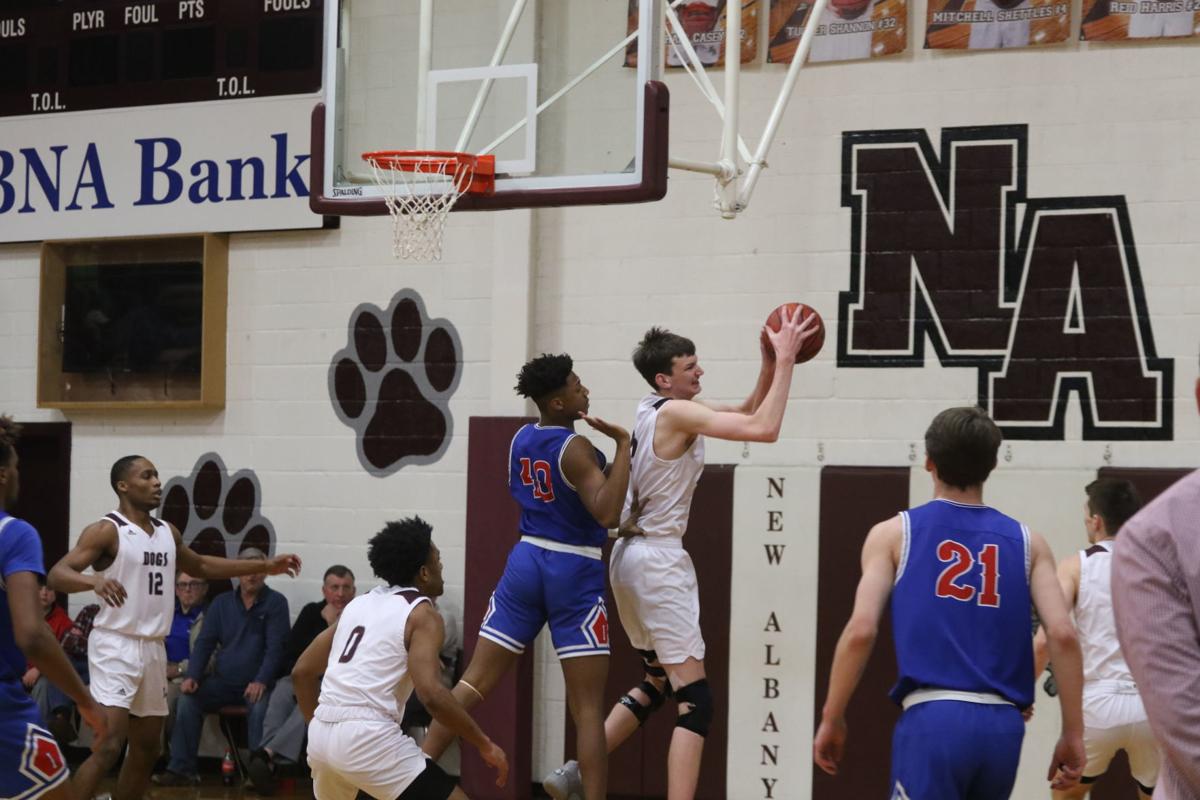 Tucker Shannon pulls down the defensive rebound in front of Ingomar's Nyhiem Jones.

Mitchell Shettles drives to the basket and scores for New Albany on Thursday. He finished with 32 points on senior night.

Kelsey Ledbetter scores on the short jumper for the Lady Bulldogs. She hit for a game-high 26 points.

By Dennis Clayton Sports Editor
1 of 3

Michael Casey of New Albany drives in hard for the layup attempt against Ingomar.

Lexi Campbell (3) of Ingomar wins the scramble for the loose ball with Madison McDonald.

Tucker Shannon pulls down the defensive rebound in front of Ingomar's Nyhiem Jones.

NEW ALBANY - The New Albany Bulldogs celebrated Senior Night with a statement win against Ingomar, 69-58. This would be the last opportunity that the Bulldogs would have to secure a win over the Falcons and they made the most of it.

Ingomar, top-ranked by the Daily Journal, had won the previous two meetings between the teams by a combined eight points. It was the second loss in a row for the Falcons, who fell in overtime to Biggersville on Monday night.

However, Isaiah Ball and Artaveion High went 2-for-2 at the line and Mitchell Shettles buried a three to break the game open for the Bulldogs and establish an eight-point lead in a little over a minute’s time. High added two more free throws to stretch the lead to 10 before Tyson Smithey scored to half the 9-0 Bulldog run.

“I told them today that you’ve got one last chance to beat Ingomar and if they beat us, then we can’t beat them because there ain’t another chance,” New Albany coach Scotty Shettles said. “I thought they played a good basketball game tonight.

“In a game like that, every possession is big, every shot is big and we had some guys that stepped up and made some shots. That’s how you win basketball games.”

One of the key factors of the outcome was the fact that New Albany played with the lead for the majority of the contest.

"I told my team coming in that for us to win, we've got to make shots, we've got to rebound and we can't play from behind," Shettles said.

"You know, in a game like this, every free throw is big and when you shoot 19 for 22 from the free throw line, you've got a good chance to win a basketball game," Shettles said.

"I thought we shot it pretty good from two-point line, we were 50 percent and 35 percent from the three point line was okay, but we just battled and that's what I'm proud of them for doing."

Shettles led all scorers with 32 while fellow long-range sharpshooter Isaiah Ball hit for 17.

Tyson Smithey led Ingomar with 16 points. Nyhiem Jones came off the bench to score 13 and Nathan Weeden finished with 11.

TURNING POINT: Hunter Bynum’s three pointer pulled Ingomar to within one at 54-53 with 3:53 left, but New Albany went on a 15-5 run to end the contest and seal the win.

POINT MAKER: Mitchell Shettles was a man on a mission as he poured in 32 points and connected on five 3-pointers.

TALKING POINT: “I found out that after Ingomar had beaten us twice that we could get up to play and I thought my boys rose to the occasion. They did everything I asked them to do – they played team ball, they played with energy.” – Shettles.

(G) New Albany 50, Ingomar 33: Kelsey Ledbetter had a huge night in her final regular season home game as she scored 26 points including three 3-pointers to lead New Albany to the 50-33 win.

Ledbetter scored 11 of the 18 third quarter points by New Albany which allowed the Lady Bulldogs to take a 43-24 lead over Ingomar.