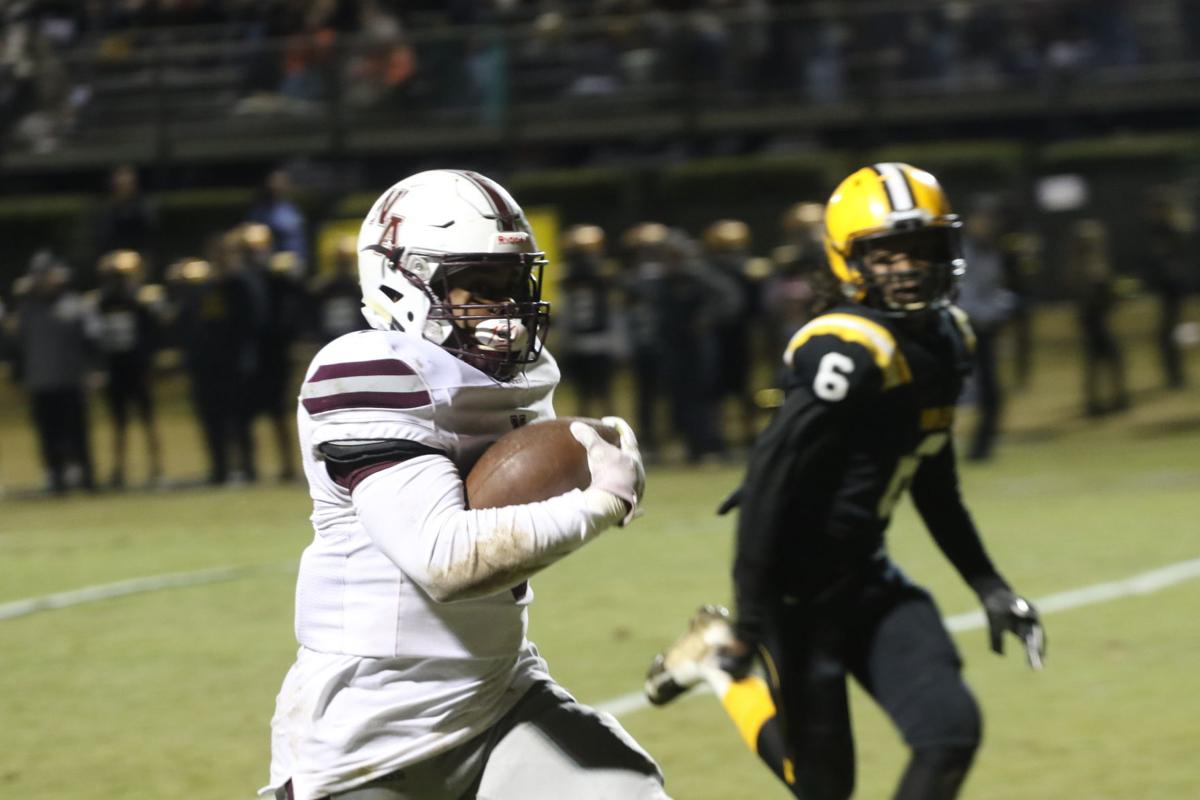 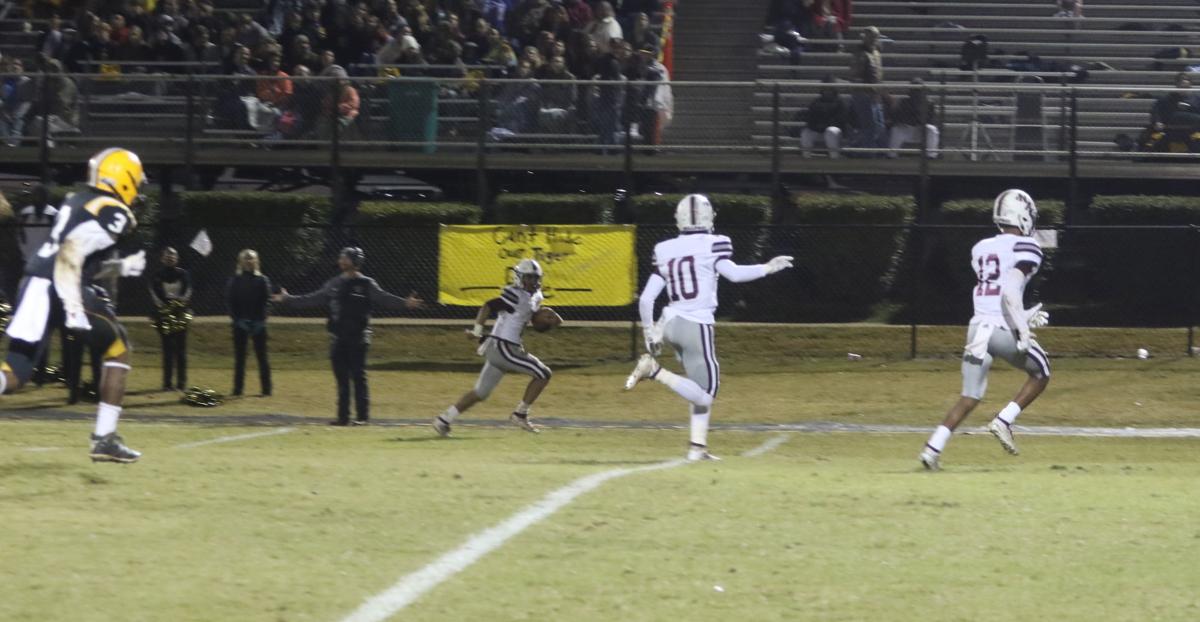 Mason Simmons is off and running as he scores on this 58-yard touchdown pass play for the Bulldogs. 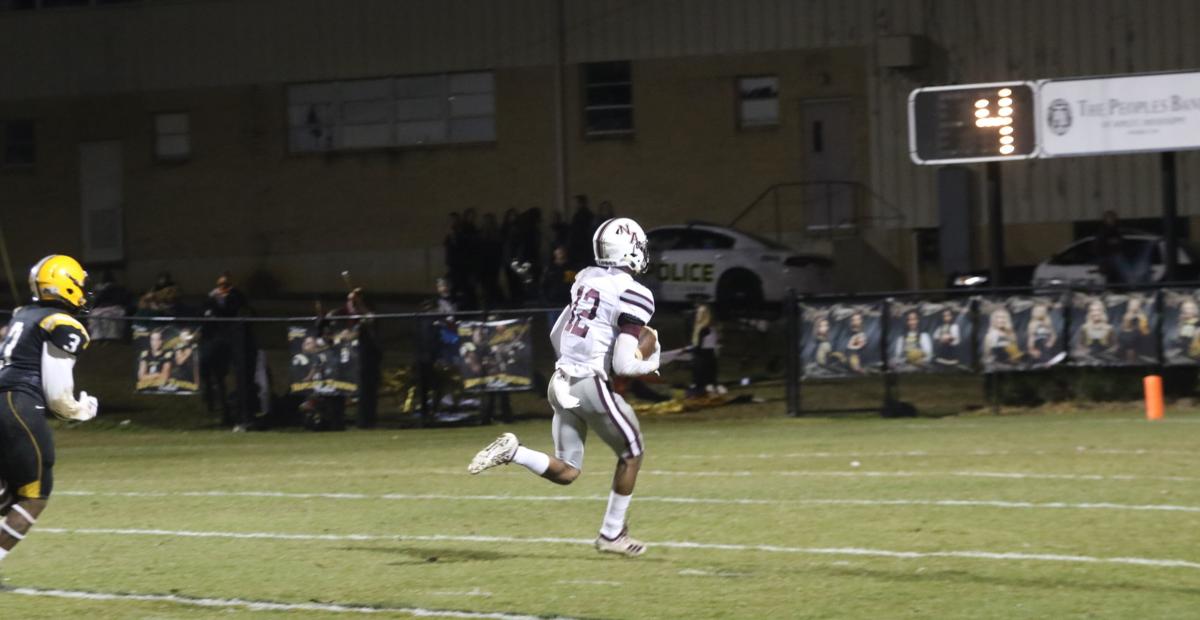 No one is going to catch Ramaryon Crawford as he scores the touchdown on this 61-yard reception in the third quarter. 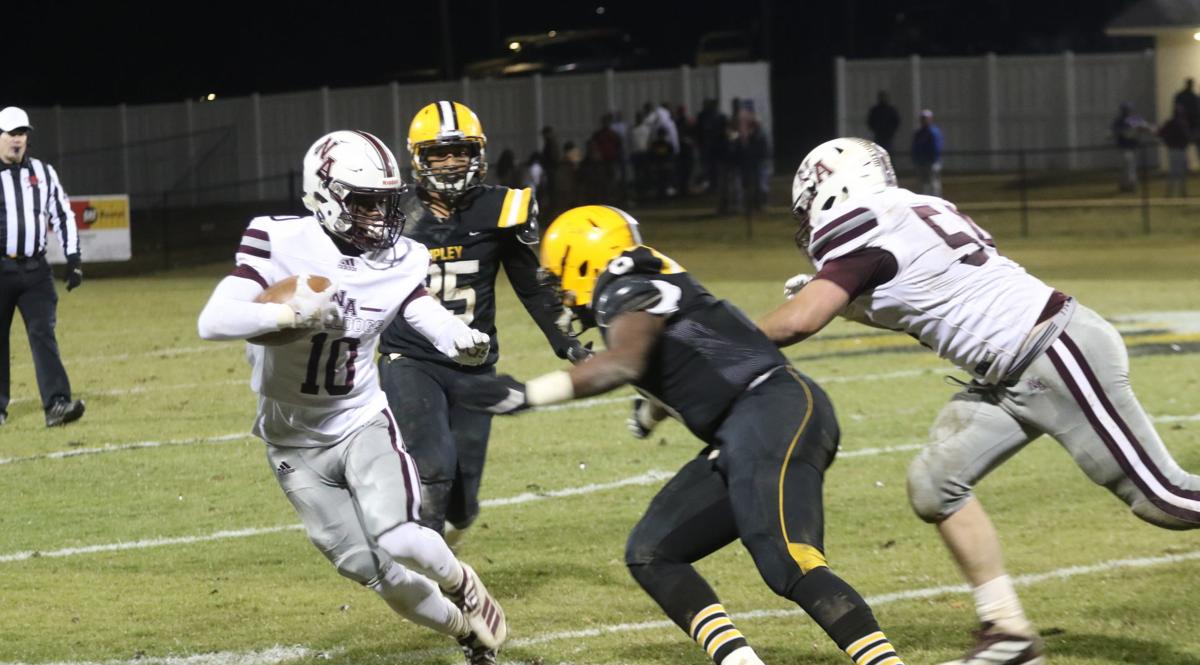 Cameron Knox outruns Jamal Brooks and the rest of the Ripley secondary for this 44-yard touchdown during the first quarter.

Quarterback Charlie Lott threw three touchdown passes and picks up 18 yards on this run in the second quarter.

Mason Simmons is off and running as he scores on this 58-yard touchdown pass play for the Bulldogs.

No one is going to catch Ramaryon Crawford as he scores the touchdown on this 61-yard reception in the third quarter.

RIPLEY - New Albany came in Friday's game at Ripley knowing and stressing the importance of winning in order to host the opening round in next week's 4A playoffs. The Bulldogs came through with the win to accomplish that goal as they defeated the Tigers 48-21.

"You know, everybody gets excited for Ripley week and wanted to come out and play hard, do our best and I think we did that," New Albany quarterback Charlie Lott said. "I'm proud of my guys."

Ripley drew first blood with as the Tigers marched 68 yards in 14 plays to score on Jamal Brooks' touchdown. The conversion gave the Tigers the 7-0 lead with 4:55 left in the quarter.

Lott led the Bulldogs to the end zone on their second possession as he hit Cameron Knox on a 44-yard touchdown and Caleb McDonald knotted the score with his successful PAT.

The score wasn't tied for long as Ripley's Tristan Vandiver hit Sentavius Hunt for a 63-yard touchdown and Ripley led 14-7 as the first quarter came to a close.

CJ Hill capped a 64-yard New Albany drive with his 30-yard touchdown run and McDonald again tied the contest with 9:51 left in the half.

Knox set up the next Bulldog score with his interception of a Ripley pass to give New Albany possession at their own 29.

Lott ran for 18 yards on first down and then hit Mason Simmons for a 58-yard touchdown strike to give New Albany the 21-14 lead at the 6:14 mark in the second quarter and the teams went to the half at that score.

Lott continued with the hot hand as the teams came back from the half. He hit Ramaryon Crawford on a third and 10 with a 61-yard TD pass and McDonald's kick extended the lead to 28-14 with 10:30 left in the third period.

New Albany needed only one play to score their next touchdown as Hill took the handoff and ran 50 yards to raise the score to 34-14.

The Tigers were able to score with 4:13 left in the third as Vandiver hit Brooks on a 56-yard pass to close to 34-21 which held up through the end of the quarter.

The Bulldogs drove 62 yards on nine plays to score with 11:14 left in the game as Hill scored his second touchdown of the night from nine yards out. McDonald tacked on the extra point for the 41-21 lead.

CJ McKinney wrapped up the scoring for the contest as he weaved his way through the Tiger secondary for a 24-yard touchdown with 5:48 left and McDonald added the PAT for the final score of 48-21.

Lott had a huge night for the Bulldogs as he went 8 of 14 passing for 247 yards and three touchdowns as he was instrumental in the win.

Running back CJ Hill had 15 carries for 165 yards and two touchdowns to lead the Bulldog rushing attack.

New Albany ends the regular season 7-3 and 3-1 in 1-4A. The Bulldogs will host Shannon 5-6, 3-2 on Friday night at Kitchens Field in the opening round of 4A playoffs.