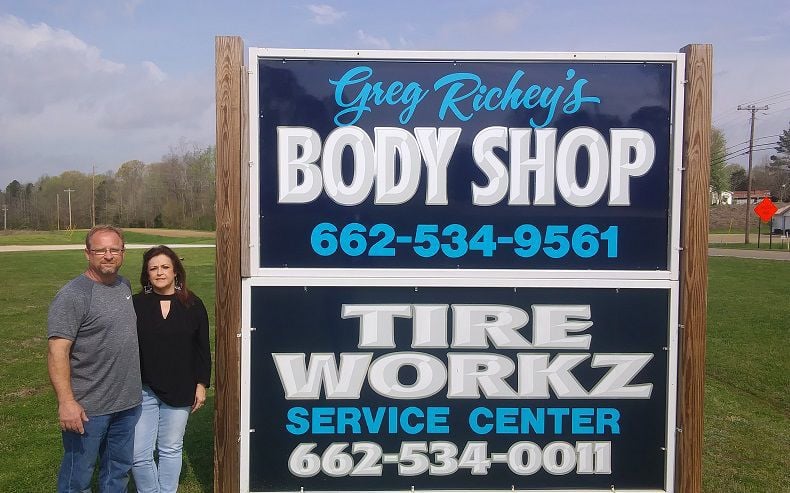 Greg Richey and his wife, Christy, stand by their sign at 1290 State Highway 178 East. 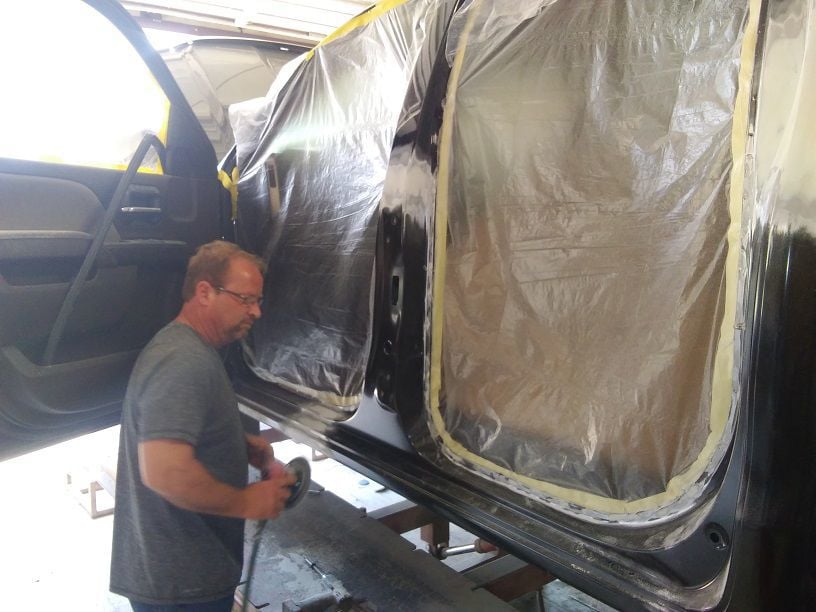 Greg Richey operates a sander as he works on a truck in the body shop.

Greg Richey and his wife, Christy, stand by their sign at 1290 State Highway 178 East.

Greg Richey operates a sander as he works on a truck in the body shop.

Greg Richey’s Body Shop has been in New Albany for more than 30 years and now has a new location.

The body shop, which opened in 1988, is now located at 1290 State Highway 178 East, two miles from the Post Office. Previously, the shop was located on East Main Street in New Albany.

Richey has been around cars most of his life, and his late father had a mechanic shop in New Albany from around 1972 to 2008.

“I grew up around cars all my life with my daddy having a garage, and it just evolved into doing body work,” said Richey. “As a kid I would piddle around in my dad’s garage.”

He still enjoys the work today, particularly when it comes to satisfying the customer with quality workmanship. For instance, he likes transforming a wrecked car into one that looks as though it just came off the car lot.

“It’s got to look new,” said Richey, who has a degree in auto body repair from Northeast Mississippi Community College.

Richey wanted to move his shop to the new location because he also has another business next to it called Tire Workz, which opened in 2014.

“It was better to have everything in one central location,” said Greg’s wife, Christy, who works with him in the business.

Tire Workz and the body shop are now located directly next door to each other, which is very convenient. There was too much driving back and forth when the two businesses were in different locations.

Greg Richey’s Body Shop, which employs a team of seven people, does a lot of insurance-related repair work on vehicles as well as glass work.

He said people should come to him for vehicle body work because he has a lot of experience in the field.

“I’ve been in business for 32 years,” Richey said. “I’ve got a lot of loyal customers.”

Christy added, “We do real honest work. We work really well with the insurance companies.”

She said Greg Richey’s Body Shop and Tire Workz take pride in the quality of their work and the customer service provided by the businesses.

Vehicles that go into the body shop come out in a timely manner, Christy noted.

Displayed inside the shop’s office are vintage signs that Richey made by hand. For instance, there are signs for Harley-Davidson, Texaco, Standard Oil, Buick and Pontiac.

Doing custom body work just comes naturally to Richey, who sees it as an art form.

“It’s a dying art form,” said Richey, noting that not many young people are going into the field.

He has to stay ahead of all the technology that comes with vehicles these days. When he started, it was a luxury for a vehicle to have power windows, he said.

Most of the time his shop stays busy, and he said he has great employees. A painter has been with him for 15 years.

“All of our children have worked for us at some point in time,” said Christy.

Greg and Christy have three boys, and their names are Austin, Payton and Ethan.

Overall, the couple enjoys having their own business even though it can be challenging at times.

Greg and Christy have been married for nearly 30 years and have been working together for 28.

They have both lived in New Albany all of their lives and met when they were around 12 years old at the New Albany skating rink. She graduated from the former W.P. Daniel High School while he is a graduate of East Union Attendance Center. They attend Hillcrest Baptist Church.

They enjoy being at the shop, and the business’ employees are like family, Christy said. When they are not at the shop, Greg enjoys working with his cattle.

They wouldn’t want to be anywhere else but New Albany.