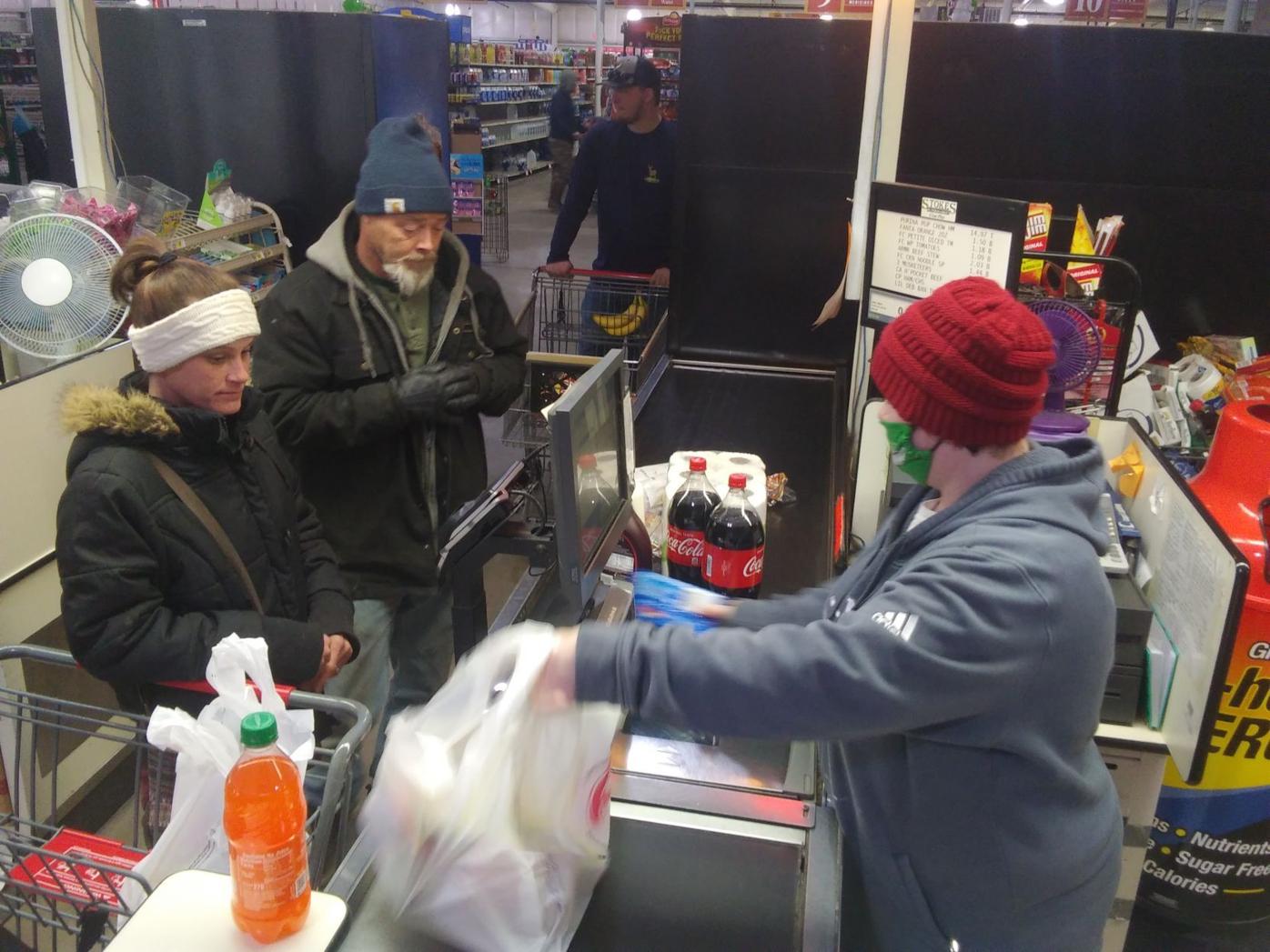 Tim and Samantha Page make grocery purchases at Stokes Supermarket in New Albany with the help of cashier Callie Roaten. 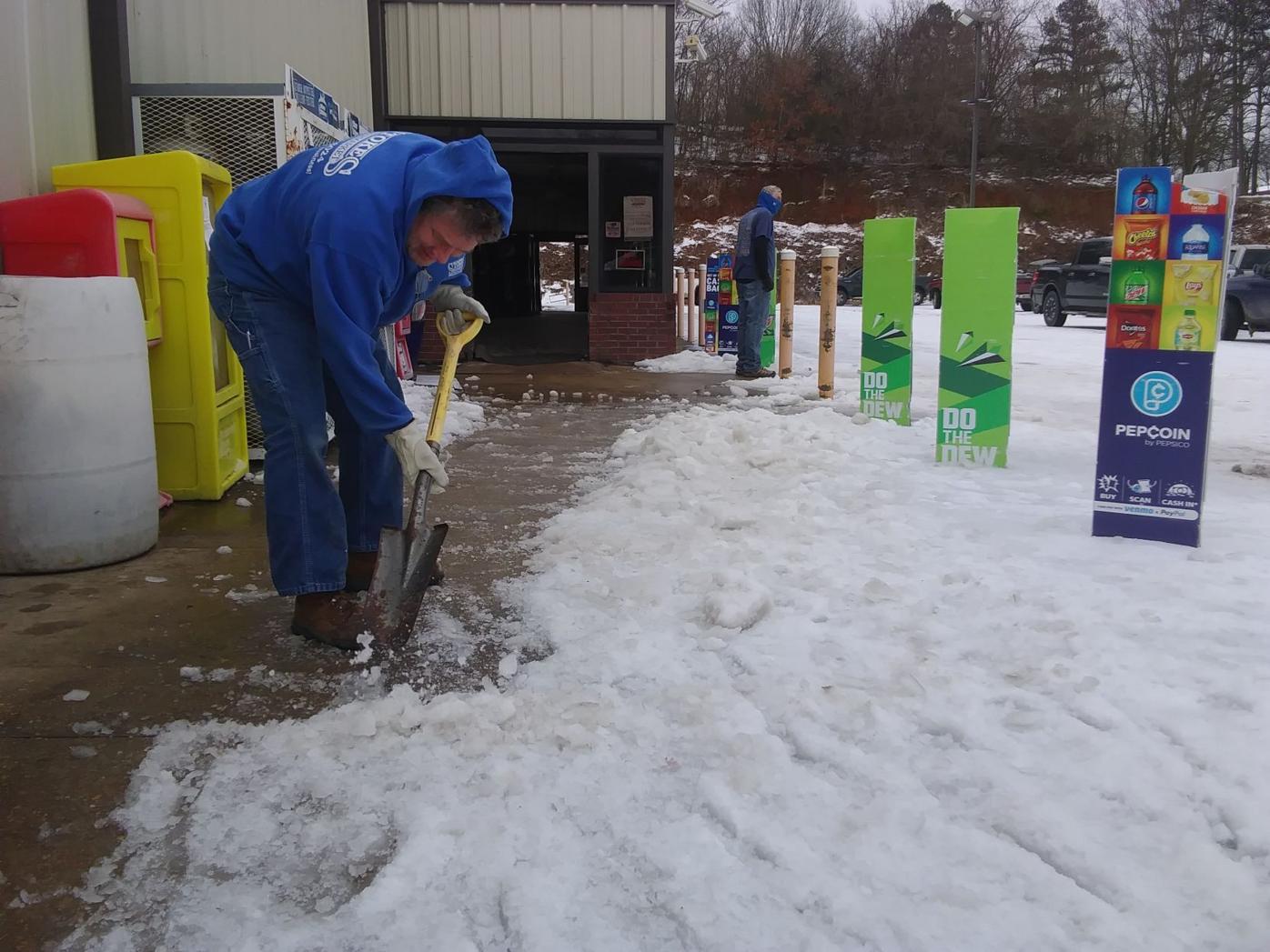 Employee Vinson Brewer clears ice and snow off the sidewalk in front of Stokes Supermarket in New Albany on Wednesday.

Tim and Samantha Page make grocery purchases at Stokes Supermarket in New Albany with the help of cashier Callie Roaten.

Employee Vinson Brewer clears ice and snow off the sidewalk in front of Stokes Supermarket in New Albany on Wednesday.

Grocery stores in New Albany have seen major increases in business due to the winter storm.

Stokes was actually closed on Monday due to the severe winter weather conditions. Childers said he did not want his employees or customers to risk driving to the store in the bad weather. He did not think many customers would be out driving to the grocery store anyway on Monday.

“The main thing is to keep everybody safe,” said Childers, adding that his store has seen an increase in business of around 35 to 40 percent since the storm hit.

Greg Cooper, manager of Reed’s Market in New Albany, said business at his store has been “nonstop” since the storm hit. He said people are “just trying to stay ahead and beat the storm.”

Reed’s has been closing earlier than normal to give employees time to get home safely. The store was going to close at 3 p.m. Wednesday.

Reed’s has run out of some items, including milk, said Cooper, adding, “We’re supposed to be getting some more bread in.”

But he noted that getting products to the store depends on whether delivery drivers can get on the roads.

Hopefully, everything will get back to normal Friday and Saturday, Cooper said.

“When stuff like this happens it really goes crazy,” Cooper said. “We just try to be ready for it, be prepared for it. It’s just people wanting to make sure they’re in good shape at home. We try to do our best to see that that happens.”

With the possibility of more winter weather coming in, Childers said, “We’re just kind of watching the weather and taking a safety first attitude. If it starts to deteriorate and get dangerous we’re going to close down and go home. There’s nothing in here worth anybody losing their life over or getting injured for.”

Childers said he appreciates the customers for supporting his business. He has been selling a lot of soup, pancake mixes, milk, eggs, bread and ground beef. It appeared the store was about to run out of chicken, Childers said, adding that the delivery trucks are off schedule due to the storm.

The store will begin to run short on some items, but it will not last for long with things starting to get back to normal around Saturday.

In fact, Childers said there may actually be a lull in business after the storm because people have stocked up on groceries in the past few days.

The store has been opening a little later than normal and closing earlier. He wants his employees to be able to get home before it is dark. Once it gets dark, visibility goes down and it gest colder, he noted.

Customers still have the whole day to get what they need and be home before dark.

“It’s safer for them if they’re not out after dark too,” Childers said, adding that ice that has thawed during the day can refreeze at night and become “quite hazardous.”

“It’s not worth putting yourself at risk,” Childers said.

The goal is to keep safety in mind and give people time to get the groceries they need, he said.

“You try to be here when you’re customers need you to be here,” Childers said. “We try to be servants.”

The employees at Stokes are “so dedicated,” said Childers. Some have called him and said they can’t drive on the slick roads but are still willing to work if he will come pick them up. Childers has a four-wheel drive truck and picked up five employees for work Wednesday morning.

“They’re more than willing to be here,” he said.

Childers thinks people stock up on food during winter storms because they do not know how long they will be confined and want to make sure they have plenty to eat. They may also want some comfort food, he said.